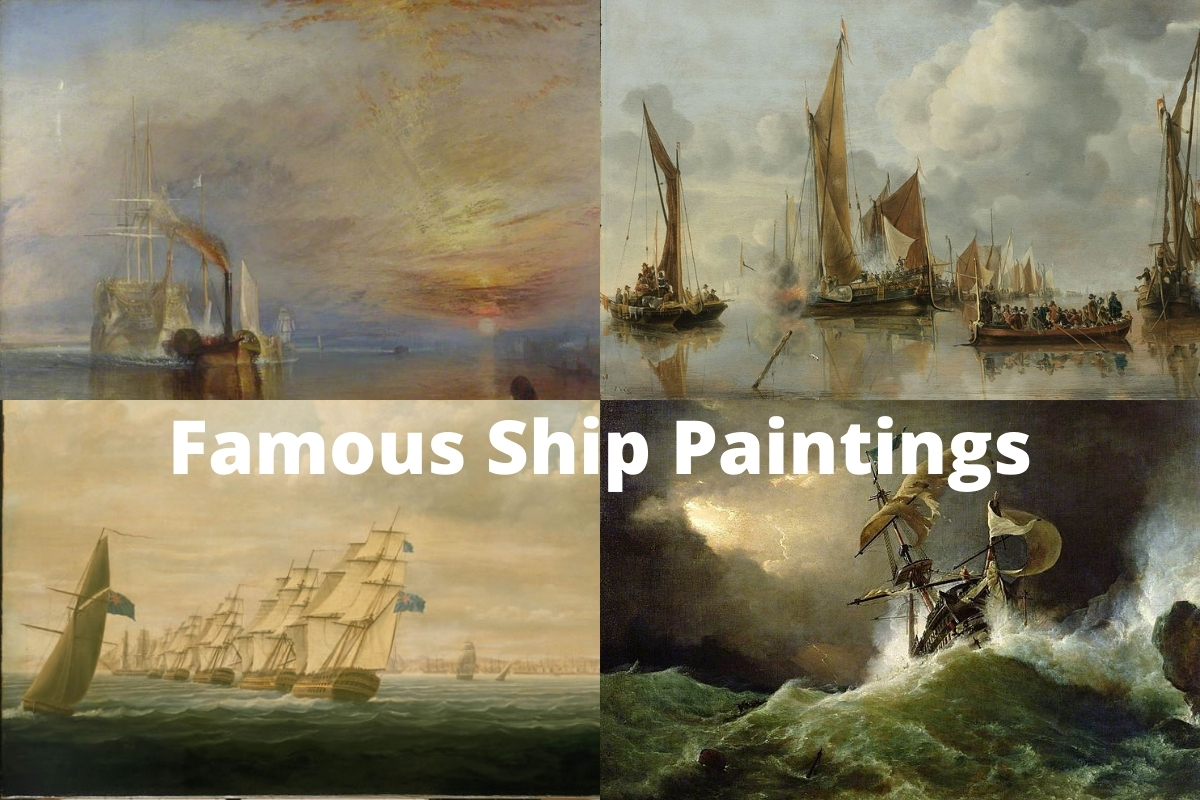 One of the most iconic painting niches in the world is that of ship paintings. For centuries, the world’s seas were dominated by various nations who sent trading vessels and warships out into the blue horizon.

Over many years, these ships became the lifeblood of the economies of certain countries like Portugal and Great Britain, their crews bringing and delivering precious cargo of all kinds.

Ships of all shapes and sizes have sailed the seas for more than a thousand years. The juxtaposition of a sophisticated man-made ship with the unpredictable and dangerous nature of the ocean and Mother Nature itself is part of what draws the admiration of so many art lovers and enthusiasts, especially along coastal regions.

Many artists throughout history have dabbled in producing works that featured ships and their legendary voyages on the high seas with some focusing solely on the subject of maritime travel. Here are some of the most famous ship paintings ever created.

1. The Fighting Temeraire Tugged to her last Berth to be Broken Up – J.M.W Turner

One of J.M.W. Turner’s most famous paintings involves a well-known warship that was the star of at least one iconic battle for the British Royal Navy in the 18th century. His work is titled The Fighting Temeraire Tugged to her last Berth to be Broken Up, a lackluster, but fitting description of the fate of this once feared vessel that was pivotal to the nation’s fleet of warships.

The painting was done in 1839 and depicts the final moments of the Temeraire as it is slowly tugged out to sea to be dashed and parted out.

The painting is from the Romanticism era and is an interesting contrast between the changing technologies that were happening in maritime shipbuilding and travel during the early 1800’s.

The majestic and once-famous warship, who played a major role at the Battle of Trafalgar, is now being dragged away from port by a lowly, steam-powered tugboat.

It is a sad reminder that a certain sense of elegance and grandeur is often lost in what many deem to be a progressive advance of technology.

2. A First Rate Man-of-War Driven Onto a Reef of Rocks, Floundering in a Gale – George Philip Reinagle

The early 1800’s is likely the height of the era of famous ship paintings. One of the most well-known maritime painters was George Philip Reinagle, who was well-known for his ability to capture the essence of the sea’s sometimes tumultuous character that had destroyed so many powerful, strong vessels throughout history.

His 1836 work titled A First Rate Man-of-War Driven Onto a Reef of Rocks, Floundering in a Gale is aptly-named as it features just that—a ship that has been caught in the clutches of the raging sea.

One of the most intriguing aspects of maritime travel was the possibility that sailors could meet a terrifying demise if they were caught in a blustering storm, otherwise known as a gale.

This painting is iconic for Reinagle’s ability to depict the giant, crushing force of the waves along with the sea spray that has been kicked up by the high winds. This work is a grim reminder that not all seafaring travel and adventure ends safely.

Many ocean paintings containing ships will invariably make the ship the main focus, but in Reinagle’s piece it is the power of the ocean waves that dominate.

Some of the most famous ship paintings involve intense, deadly battles at sea between powerful naval fleets. Such is the case with Louis Phillipe Crepin’s 1805 work titled Battle of Trafalgar.

This painting depicts one of the most famous naval battles in history that took place in the year noted.

The Battle of Trafalgar featured the mighty British Royal Navy as they were pitted against two other worthy opponents—the Spanish and French naval forces—who had joined forces to try and topple the powerful force that had dominated the waters surrounding Europe and much of the world during this time.

Crepin’s painting portrays, with great accuracy, the close-quarters combat that so often occurred in naval battles.

As noted above, J.M.W. Turner was among the most famous artists who focused on the life and voyages of sailors and their ships.

Many times, these voyages were undertaken during powerful, unpredictable storms that all-too-often led to the ships capsizing and the entire crews being lost.

Turner’s 1842 work titled Snow Storm – Steam-Boat off a Harbour’s Mouth is one such painting that depicts the sea’s ability to make any vessel, large or small, feel the power of its might from time to time.

The painting features the steam boat ship caught in a frigid snow storm, the wind sweeping and whipping in every direction as the ship struggles to stay on course and avoid succumbing to the massive waves.

According to many art historians, Turner went to great lengths to accompany various ships’ crews on their journeys so that he could paint his works as accurately as possible.

So many of the most famous ship paintings ever created feature vessels that are either engaged in raging battles, or caught in powerful gales on the open ocean. However, there are a few notable works that depict the calm, serene nature of the ocean or coastal areas.

Fitz Hugh Lane’s Becalmed off Halfway Rock is one such work that depicts a scene of beauty that few people outside the world of ships and sailing ever get to experience.

This 1860 work depicts ships anchored down next to Halfway Rock, a famous sea marker that is situated approximately halfway between Boston and Cape Ann.

This marker was a popular stop for trading vessels and supply ships as they could join up with other ships and carry out various types of maritime business at a specific location.

Lane’s work features a number of ships anchored down with small row boats working their way from one to another, likely swapping various cargo and other items.

6. Dutch Men-O’-War and Other Shipping in a Calm – Willem van de Velde II

Willem van de Velde II was a painter who specialized in maritime art during his career in the late 17th century.

This was a time when sailing ships were the height of mankind’s technological achievements and the naval fleets of various nations were the most vital part of any military force.

Velde’s work titled Dutch Men-O’-War and Other Shipping in a Calm was created in 1665 and features the Dutch navy’s vast fleet of ships that include the deadly and feared Men-O’-War vessels.

These ships were known as floating fortresses who possessed the ability to mercilessly pummel opposing ships or coastal forts and cities with impressive precision.

The mid-1600’s was a time in which maritime travel was responsible for reshaping the people and nations of the world as many pilgrims and travelers ventured to the New World across the Atlantic Ocean.

Jan van de Cappelle captured one instance of significance from this time period in his 1650 work titled The Home Fleet Saluting the State Barge.

The painting depicts a number of different ships gathered together in a port to salute a prominent vessel as it embarked on its voyage.

Cappelle’s work is one of the most well-known ship paintings in history as he masterfully depicts the water’s ability to mirror the happenings above its surface with stunning detail.

Claude Monet is celebrated as one of the most famous impressionist painters, but most of his work featured scenes from dry land instead of ships and maritime travel. However, his 1875 painting titled Argenteuil (Red Boats) is among one of the most recognized ship paintings ever created.

This work features Monet’s trademarked Impressionist painting style and depicts a calm scene that features contrasting colors that truly highlight the boats in the center of the canvas.

The smooth water appears almost like glass in its ability to reflect the boats and their towering masts.

Monet’s brushstrokes vary greatly when one focuses on the sky above the water and the boats, which are crafted with short, choppy strokes that are able to convey great detail.

The British Royal Navy was at the peak of its seafaring prowess across much of Europe and the rest of the world during the latter half of the 18th century.

The nation’s powerful fleet engaged in many battles along the coast of Portugal during this time as the two countries were locked in a bout to control the waters around coastal Europe and other parts of the Atlantic.

Thomas Buttersworth painted a work in 1797 that is a testament to a great naval battle for the British forces off the coast of Lisbon. Following the famous Battle of St. Vincent, rear-admiral Nelson and 10 bargemen were engaging in a raid on Spanish gun-boats under the cover of darkness.

The Spanish commander realized his boats were under attack and launched an effort to defend them with 26 of his own men. Despite the British being heavily outnumbered, they managed to kill 18 Spanish sailors and capture the remaining few after a bloody sword fight ensued.

Buttersworth’s painting is a testament to that incident that was a historical victory for the British Navy.

One of the most iconic American paintings of all time was done by Winslow Homer, who was another artist that was well-known for his maritime paintings.

His 1876 painting titled Breezing Up (A Fair Wind) features a highly-detailed scene of a small sailboat cruising along on the waves as the sun is at the backs of the men and boys aboard the boat.

In the painting, the boat’s sail is clearly filled with what many would consider to be a ‘fair wind’ as it leans heavily toward the water while the boat’s rudder is steered toward their destination.

The painting is meant to depict a common scene from the late 19th century America as sailing was one of the most popular means of travel around coastal New England at this time.

The work is known for Homer’s masterful use of light and dark, along with the colors and how the sunlight brings out the depth in the varying hues.