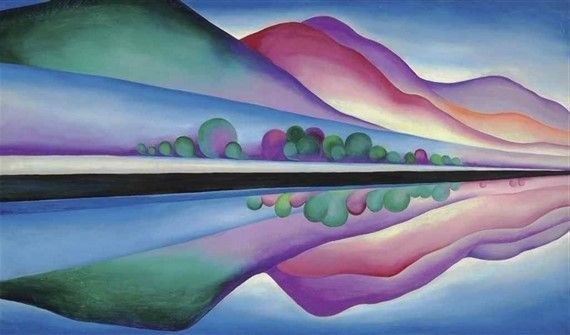 One of the most respected and widely regarded American artists of the of last century, Georgia O’Keeffe was a modernist painter who cannot be tied down to that period — her work seems as timeless, vibrant and inspiring as it was fifty years ago.

Georgia O’Keeffe was born November 15 1887 on a dairy farm in Sun Prairie, Wisconsin. From a very early age she was drawn to art and was encouraged in the discipline by her parents; by the time she left high school she was convinced she wanted to be an artist.

Studying at the Art Institute of Chicago in 1905 and the Art Students League in New York, she drew considerable praise from her instructors but was discouraged and uninspired by their emphasis on realism and “perfection” in painting.

She longed for a style of her own, to capture in her paintings the feelings and gracefulness she saw in the world.

In 1915, studying for a teachers degree in South Carolina, O’Keeffe met and took classes with Arthur Dow, an art enthusiast who worshiped oriental art rather than European art.

Dow helped expose Georgia’s mind to the possibility for different styles of art. “It was Arthur Dow who affected my start, who helped me to find something of my own.”

It was then that she began work on her series of small charcoal abstractions, which she was pleased with and sent to a friend in New York.

The drawings by chance found their way into the hands of Alfred Stieglitz, an obsessive photographer and influential participant in certain New York art circles.

The energy and confidence of these drawings from this “mystery woman” so excited Stieglitz that in 1916 he exhibited them at his Manhattan art gallery without her even knowing.

Two years later, Stieglitz had been introduced to O’Keeffe and had persuaded her to move to New York and devote herself to painting.

Shortly thereafter they fell in love and began a romance and artistic collaboration that would last for many years.

The story of Georgia O’Keeffe is inextricably tied up with the life of her husband and partner — and in many ways Stieglitz did for photography what she did for the American painting, championing photography as a display of personal expression.

Both Stieglitz and O’Keeffe were artists eager to take their various art forms in a new direction. They lived and worked together, regularly showing their new work in the gallery.

For Stieglitz, O’Keeffe was a muse, and the many portraits he took of her are known to be some of his best work.

Moving between New York City and upstate Lake George,NY, O’Keeffe was inspired by the beauty of both the rural landscape and the less immediate beauty of the industrialized city.

O’Keeffe was able to paint abstract, intensely personal paintings without giving in to the self absorption of many other modernists — her paintings were bold and modern, but they were also very aesthetically beautiful.

She often sought to capture the unique beauty of the American landscape. Her paintings of flowers were both carefully precise in detail as well as abstract, with soft gradients and patches of color.

In 1929 O’Keeffe took a trip with her friend Becca Strand to New Mexico, first to Santa Fe and then to Taos. She fell in love with the location — the bright sunshine and open skies. She would journey there annually from then on, and later make it her home.

The New Mexico landscapes and still life’s, especially the desert paintings of brilliant white parched animal bones set against deep blue sky, are as highly regarded as her earlier flowers.

By the nineteen forties, Georgia O’Keeffe’s stature in the art world had grown tremendously. In 1946 she was given a one-woman exhibition at the Museum of Modern Art in New York, the first ever from that museum for a female artist.

When Stieglitz died in 1946, O’Keeffe moved to New Mexico permanently to work on her paintings in peace and solitude. She captured in these later paintings the long cloudscapes of the southwestern desert, the adobe walls of her home in Taos, and the shadows and natural curves of the bleached animal bones.

Some of her most famous works of art are centered around flowers.

By the end of the nineteen sixties, retrospectives all around the country and the world had cemented O’Keeffe as one of the most admired painters of her time.

However, by then her eyesight had failed to the point that she could barely see past her canvas. It was then that she befriended a local potter named Juan Hamilton, who assisted her with household chores and helped her with her art work.

Together they completed and published in 1976 a book about her art called Georgia O’Keeffe, and a companion video project where she talked about her feelings on art.

O’Keeffe continued to draw charcoal sketches for herself up until 1984. That year she moved in to Hamilton’s home to be closer to medical facilities. She died on March 6, 1986.