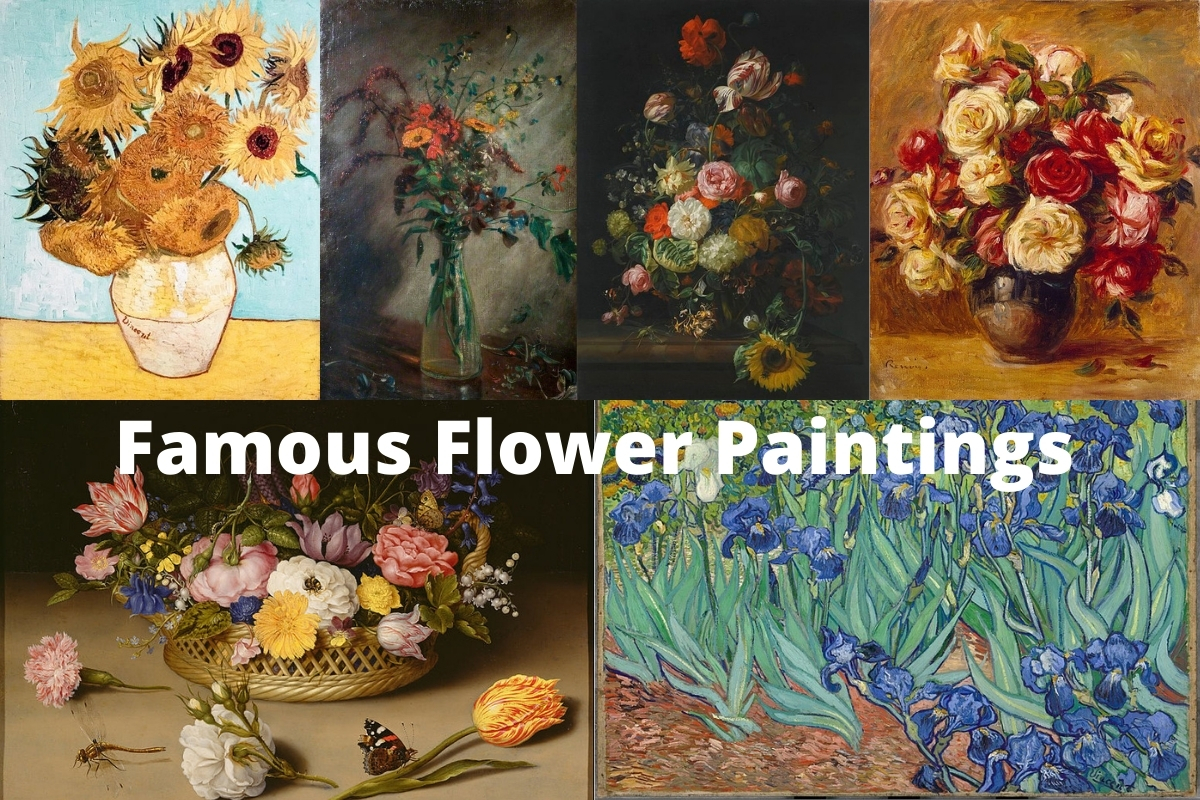 Throughout human history, flowers have been a central focus of artists from all over the world. Their effortless beauty and passionate colors are both symbolic and representative of nature’s majestic elemental beauty.

The seemingly endless numbers of different flower varieties are another reason why so many artists have been intrigued with capturing their essence through painting.

Some of history’s most prominent artists have traveled across the world in search of rare and vibrant flowers to paint and share with others who may never have the opportunity to see them with their own eyes.

A few of the most well-known painters in the world were known for their affinity for producing works that focused on flowers.

In this article, we will look at 10 of the most intriguing and famous flower paintings ever done. We will also more closely examine how and why these artists chose to depict them in their works.

No other artist in human history is as famous for his works related to flowers as Vincent Van Gogh.

Though he was plagued with a litany of mental illnesses and maladies, he displayed an uncanny ability to capture the essence of a flower’s natural beauty in an innocent and pure manner that no artist before or since has been able to match.

In 1888, Van Gogh would create one of his most defining works that featured a simple vase with a bouquet of sunflowers.

The painting was titled Still Life Vase with Twelve Sunflowers and remains one of the most famous flower paintings ever created. This work was done just two years before Van Gogh would take his own life at the age of 37.

The painting itself is one that’s dominated by shades of yellow and orange—the vase filled with a lush bouquet of sunflowers.

Van Gogh is said to have had a special fascination with sunflowers and the way they reacted to the sun’s light, following it as it moved across the sky throughout the day.

He went on to paint several different works titled Sunflowers in 1888, each of which remain as some of the artist’s most priceless paintings.

Claude Monet is remembered as one of the most influential figures of the Impressionist movement that took place during the late 19th and early 20th centuries.

Many of his works featured various scenes from French society or portraits of individuals, but he is perhaps most celebrated for one series that focused largely on flowers in their natural beauty.

The series, titled Water Lilies, started in the late 1890’s and would go on to last throughout the next few decades.

Monet painted more than a hundred works that were part of this series, each of which features water lilies in their natural state next to a tranquil pond or stream.

The paintings in this series were praised for Monet’s ability to capture the soft and subtle beauty of nature through his own eyes.

He was known to spend hours each day sitting next to the pond on his estate, soaking in the majestic beauty of the water and all the surrounding vegetation.

His many different paintings pertaining to the Water Lilies series features a wide range of colors and contrasting light conditions that provide the viewer with a glimpse into Monet’s fascination with the unique flowers.

Just after the Renaissance period had faded into history, the Baroque movement would spring up much like a newly-planted bed of flowers across much of Europe.

An Baroque artist known as Ambrosius Bosschaert the Elder was one of the central figures of the early period and had an incredible amount of skill when it came to painting scenes with a sense of realism.

The Dutch painter was known for producing many works that focused on flowers, many of them featuring a vibrant bouquet of different colors that were sprawled across a table or other flat surface.

Of the many different works he did pertaining to floral arrangements, one in particular has stood out among art historians and critics as one of the most famous flower paintings ever created.

His work titled Still Life with Flowers was done in 1614 and focuses on a colorful arrangement of carnations, roses, tulips, and other flowers that combine to form an eye-catching scene that’s highlighted by masterful use of light effects.

The painting also includes insects such as butterflies and dragonflies that further highlight the natural beauty of the work.

Georgia O’Keeffe was widely known for her distinct ability to portray natural beauty in the most unseemly places and objects.

She painted many different works that offered an up-close glimpse of the smooth, curvaceous design of various kinds of flowers that many art critics were appalled at because they were perceived to imitate female reproductive anatomy.

Whether or not O’Keeffe intended these paintings to closely resemble that still remains a bit of a mystery.

One of her most memorable works and one that remains among the most iconic flower paintings ever created is known as Black Iris.

This 1926 work is not especially complex in terms of color, but garnered vast amounts of praise and scrutiny for the artist’s simple, but intentional focus on the intricate details and contours of the flower itself.

Many artists on our list used light and darkness along with the vivid colors of the flowers themselves to create a work that highlighted the powerful nature of these colorful flora.

One such artist who used darkness and light to a masterful extent was Rachel Ruysch, a Dutch artist who was a pivotal figure of the Dutch Golden Age that took place in the 17th and 18th centuries.

One of her most well-known works is titled Flowers Still Life. Completed in 1710, this painting features a large and diverse array of flowers that are situated in a somewhat dark room.

The light seems to be emitted from the viewer’s left, shining in such a way that it further enhances the contours and distinct shapes and curves of each variety of flower.

Ruysch was known to have completed many works that were similar to this, even paintings that bore the same title in many cases.

Her ability to capture the unique beauty of floral arrangements would inspire other artists in the following centuries to also explore the natural charm that flowers have and how that can be captured and expressed to the viewer.

Some of Vincent Van Gogh’s most widely-acclaimed works were done in the two years shortly before his tragic death.

The paintings he produced during this time were of immense colorful beauty and have been studied by art students ever since for Van Gogh’s impressive use of contrasting colors and distinct brushstroke patterns.

Painted in 1889, just a year before his death, he produced a work that many argue is his most famous flower painting. The work is simply titled Irises and features a lush, green bed of flowers that are tipped with the unmistakable royal blue coloring that irises possess.

Viewers will notice that there is one lone white iris located on the left side of the canvas that seems to balance out the composition of this painting.

Van Gogh arguably painted his most fascinating works in the year before his death, when his mental illness was taking an immense toll on him both emotionally and physically.

Pierre-Auguste Renoir is highly-praised as one of the most influential painters of the Impressionist movement.

Many of his works feature the relaxed social settings and scenes from French society at this time as he is known to have been fascinated with the idea of leisure.

However, some of his paintings that focused on flowers have been viewed with great respect from the world’s most highly-respected art critics.

His painting titled Bouquet of Roses was done around 1912.

The brightly-illuminated vase and bouquet of roses are painted with Renoir’s trademark sweeping brushstrokes that seemed to breathe life into his paintings.

8. Lilacs in a Window – Mary Cassatt

Mary Cassatt is remembered as one of the most prolific women from the Impressionist movement that produced some of the most incredible works pertaining to flowers and nature of any artist from the late 19th and early 20th century.

The work is titled Lilacs in a Window and features an incredible level of realistic appearance that few artists from the Impressionist era were able to replicate.

The 1879 painting is one of the few still-life works she produced, but stands out as one of the most memorable pieces from her long career.

9. A Vase of Flowers – Margareta Haverman

Margareta Haverman was an artist from the Netherlands who devoted much of her life to painting works that focused on flowers.

She enjoyed a thriving career as an artist at a time when women were typically not permitted to take part in painting or any other form of artistic expression in the Netherlands or any other part of Europe.

Her most notable work of flower paintings is simply titled A Vase of Flowers.

Painted in 1716, this scene features a sprawling and vibrant bouquet of flowers that range from carnations and roses, as well as grapes and a variety of other variations of floral beauty.

She brilliantly portrayed the bouquet and vase as having been surrounded by darkness with light pouring in from the left side of the canvas.

This painting is one of only two works that were ever signed by the artist in her career.

John Constable was one of the most widely-celebrated landscape painters in England during the early 19th century.

He dedicated much of his career to painting the landscape of the areas he called home for much of his life as he felt a duty to capture the distinct beauty of the English countryside.

His landscape paintings were nothing short of amazing and included an incredible level of realism that art critics and historians all over the world have been able to appreciate.

One of his most celebrated works that is not categorized as a landscape painting is titled Study of Flowers in a Glass Vase, 1814.

This simple, yet colorful and lifelike painting featured much of the same characteristics that had been responsible for Constable drawing so much acclaim in his early career.

The work features many of the same elements that most Romanticism works did and showed that Constable was capable of producing incredibly beautiful paintings of virtually anything he wished to portray on a canvas.