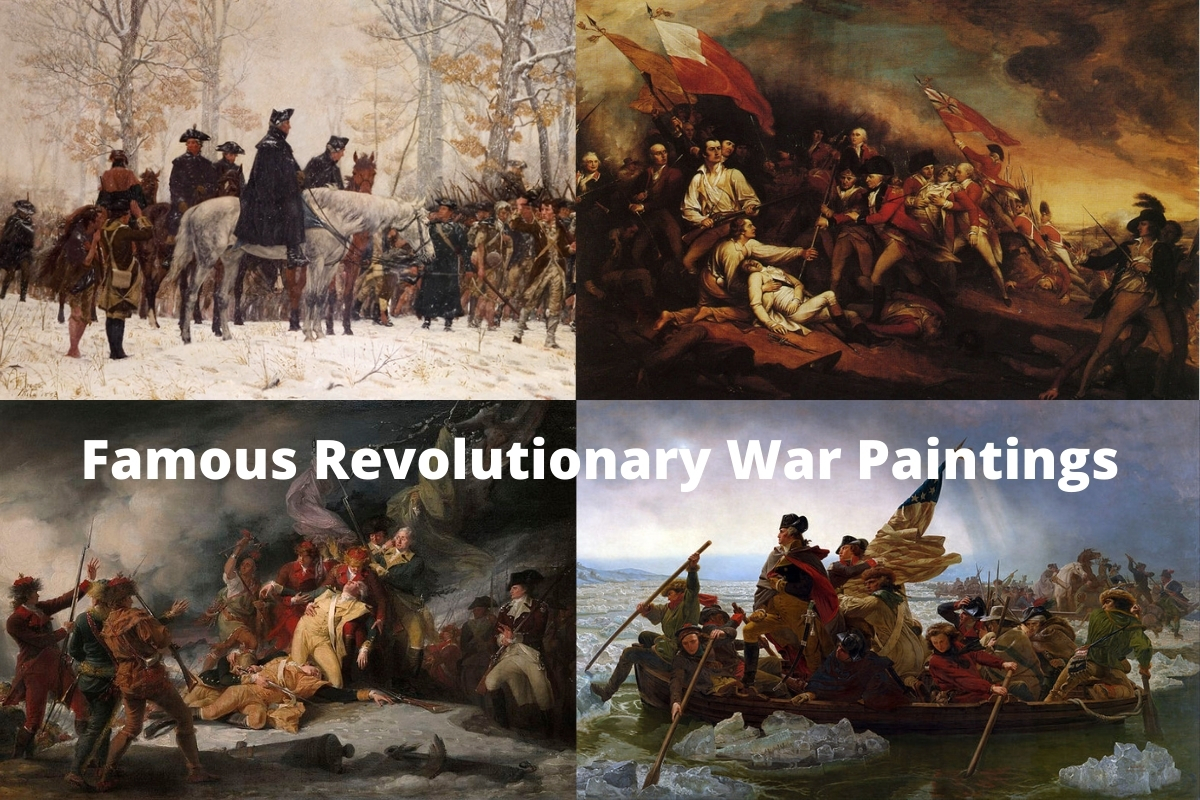 The American Revolutionary War is among the most famous rebellions in all of human history as it was the starting point for the establishment of a new, sovereign nation among the largely uncharted and untamed territory of the New World.

The differences between British and American forces had been brewing for many years before finally erupting into a full-blown armed conflict in April of 1775.

The war pitted the powerful, sprawling British Empire against what at first appeared to be a rag-tag, poorly formed militia of farmers that were mostly equipped with guns meant for hunting instead of warfare.

Nevertheless, under the leadership of such figures as George Washington, the rebellion was eventually successful in overthrowing British rule and establishing a new nation made up of just 13 states.

In this article, we will delve into the 10 most famous Revolutionary War paintings and examine what the artists’ intent was likely to be when they created them.

There is little argument among scholars and historians that the most famous Revolutionary War painting is also a depiction of what is considered to be the most pivotal battle of the entire conflict.

During the early morning hours of December 26, 1776, George Washington roused his troops and made a daring and extremely dangerous move to attack Hessian troops that were serving as mercenaries for the British forces at Trenton, New Jersey.

The most well-known painting related to this event is Emanuel Gottlieb Leutze’s work that’s titled Washington Crossing the Delaware.

Completed in 1851, Leutze created the work as a means to rally support for the idea of valiantly opposing some of the more powerful governments of Europe at the time.

The operation came as a total surprise to the Hessians, who were quickly overran and defeated in a very short amount of time, many of them never firing a shot before being taken prisoner by the woefully under-supplied American militiamen.

Leutze’s painting has drawn some scrutiny over the years for its fanciful portrayal of Washington standing up in the small row-boat, which would have undoubtedly tipped over if he had actually done so.

The operation was also known to have been conducted under the cover of darkness instead of right at dawn in the way that the painting depicts. Nevertheless, this is one of the most iconic works of the revolutionary war.

2. The Death of General Mercer at the Battle of Princeton – John Trumbull

John Trumbull was an American painter who is likely the most famous artist from the time period involving the Revolutionary War.

Many of his works center around the events that took place during the war and some art critics and scholars actually have bestowed him with the “Painter of the Revolution.”

The painting includes multiple important events that transpired throughout the battle in a way that makes them appear that they are happening simultaneously.

Historic accounts tell that Mercer’s horse was shot out from under him and he was attacked by two British grenadiers.

Many art historians and critics exclaimed that Trumbull had done an outstanding job in accurately portraying what the deceased general actually looked like, despite the fact that the artist did not have any visual reference to base his work on the general’s features as they were described to him by those that knew him.

What many did not know, however, is that Trumbull used Mercer’s son to sit in and allow Trumbull to paint the scene.

One of the most iconic and realistic depictions of the American forces’ struggle during the Revolutionary War was done by William Trego.

This painting was created in 1778 during the height of the war and was done to commemorate the bravery and dedication of the men who fought against the more well-trained and well supplied British soldiers.

Trengo’s work is titled The March To Valley Forge and features a solemn and dark column of troops and officers in procession through the wooded areas near Valley Forge.

General George Washington’s men were said to be on the brink of starvation, as well as near freezing to death due to the fact that many didn’t even have proper shoes and were forced to wrap their feet in cloth material in order to prevent frostbite, which inevitably took hold toward the end of the winter.

The painting is said to be a testament to the outstanding bravery and dedication of men who gave everything they had to defeat their British overlords and establish a free, sovereign nation in the resource-rich New World.

4. The Death of General Warren at the Battle of Bunker’s Hill – John Trumbull

Another one of the most memorable works ever done in relation to the Revolutionary War is another John Trumbull work that was centered around the death of Joseph Warren, who was killed at the Battle of Bunker’s HIll in 1775.

The work was painted in 1786 and is aptly-named The Death of General Warren at the Battle of Bunker’s Hill. Warren had originally been commissioned as a general, but chose to enlist as a private and fight alongside his fellow soldiers on the front lines.

It is this brave choice that earned him vast amounts of respect from his fellow troops, as well as his military cunning and medical expertise as a physician who tended the wounds of his fellow patriots.

5. The Battle of Princeton – James Peale

While this work was commissioned in 1783, Charles Peale’s younger brother would also create a work that is easily one of the most famous Revolutionary War paintings ever done.

The younger Peale’s painting was done in 1782 and is titled The Battle of Princeton.

Peale’s work depicts the legendary moment that took place during the height of the battle in Princeton in which George Washington rode directly into the front lines of the fighting and rallied his men who had been retreating until this point in the fight.

In the painting, Washington is seen mounted atop his favorite horse, Nelson, as he rides into the front and commands his men and officers to once again face the British troops in a last-ditch effort to drive them back.

6. The Death of General Montgomery in the Attack on Quebec – John Trumbull

Another famous work that was done by John Trumbull is known as The Death of General Montgomery in the Attack on Quebec.

Painted in 1786, this work is one that captures the moment in which famed General Richard Montgomery launched an unsuccessful attack on the city of Quebec, which was, at the time of the Revolutionary War, a British stronghold.

Montgomery is famous for being born in Ireland and serving with the British for a time as an Irish soldier. He later joined the American forces and became a General in the Continental Army.

He was killed during the attack on Quebec as he insisted on being in the front of one faction of his invasion force—a choice that proved to be deadly as he was killed by grapeshot from a cannon-blast.

The painting by Trumbull is somewhat accurate in that the background and sky are unusually stormy and dark.

This is an element that harkens back to the actual event as Montgomery is known to have planned the attack to take place on a stormy night in order to conceal their onslaught.

Another one of the most famous Revolutionary War paintings involves the death of a highly-impactful leader—this time from among the British ranks. Painted in 1783 by John Singleton Copley, this work was titled The Death of Major Peirson.

The actual event occurred in January of 1781 as the American-allied French forces invaded Jersey only to be repelled by British forces under the leadership of the young Major Francis Peirson.

The painting features a highly-detailed visual account of the struggle that occurred in the streets of Jersey and women and children can be seen running from the fray to the safety of the outskirts of the town.

The Siege of Yorktown was one of the most pivotal stages of the Revolutionary War in which French forces played a major role.

The famous French artist, Louis-Nicolas Van Blarenbergh, created a painting that was intended to be given to either Comte de Rochambeau or King Louis XVI after the war had ended in a successful campaign thanks, in part, to the help offered by the French.

This painting features a view of the surrendering British soldiers from the French lines that would serve as a testament to the major role that the French soldiers played in turning the tide of the war in the end.

The first major engagement of the Revolutionary War is known as the Battle of Bunker Hill and occurred in June of 1775.

Although the British troops ended up victorious in the fight, the battle was hard-fought and proved that the American forces would certainly not be the unorganized and timid foe that the British generals had originally expected.

The work now hangs in the United States Library of Congress and depicts the redcoat troops marching uphill against a much smaller force of American militiamen.

The final battle of the American Revolutionary War was one that combined the efforts of French and American forces together to defeat their British enemies at Yorktown in October 1781.

The famous British leader, General Lord Cornwallis, was confronted by a coalition of American generals along with the long-time rival of Great Britain, French commander Marquis de Lafayette.

The famous Revolutionary War painting by Auguste Couder captured the final moments of the planning stages of the last engagement before Cornwallis was finally cornered in Yorktown and forced to surrender.

Couder’s work, titled Siege of Yorktown, was done in 1836 and features George Washington and the comte de Rochambeau giving orders to their troops prior to the final battle.