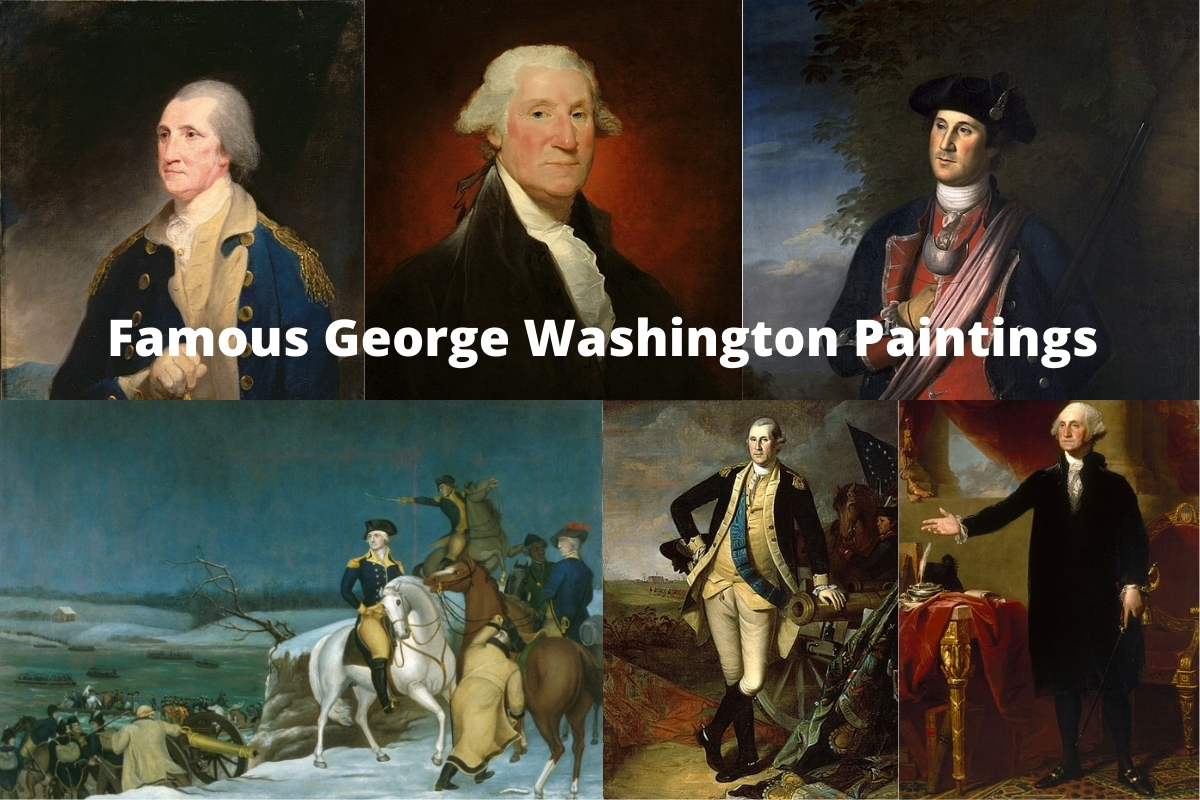 George Washington is one of the most famous figures in American history. He is credited as one of the nation’s founding fathers and played a crucial role in the war against Britain, as well as the early development of the United States.

Since then, artists all over the world have sought to immortalize Washington in various forms of expression, most notably, painting.

There are a variety of stories and historical accounts regarding Washington’s tenure as general of the United States military forces during their efforts to thwart their British overlords and establish themselves as a sovereign nation.

Many of these famous stories are the focus of some of the George Washington paintings that were created.

This article will feature 10 of the most iconic paintings that feature the legendary military leader and first president of the United States, as well as take a closer look at some of the details surrounding the artists who painted them.

There’s little doubt that the most famous George Washington portrait to have been created is the work done by Gilbert Stuart in 1796.

The life-sized portrait is titled “Lansdowne Portrait” and now hangs in the East Room of the White House in the nation’s capital. It is one of the most recognized paintings of the famous figure that has ever been created.

The work was commissioned by Lord Lansdowne, who played a pivotal role in the establishment of a peaceful surrender and terms between the United States and Great Britain.

Lansdowne appointed Stuart to complete the painting as a gesture of goodwill between the two nations and a symbol of unity that both leaders hoped would hold and prevent future war.

Stuart was said to have been under a severe time limit as Washington was terribly busy with political affairs of running the fledgling nation.

He is said to have focused most of his efforts on accurately depicting Washington’s face, but the rest of his body is noted as being quite inaccurate compared to what the first president actually looked like.

The artist would paint three copies of his famous work and even more small portraits based on the single depiction of Washington. The original work was purchased in 2001 for $20 million to avoid the possibility of it being sold at auction.

Arguably the most famous George Washington painting to have ever been done is known as Washington Crossing the Delaware.

There is a rich story behind the work in which the military and political leader leads his troops in a daring mission to surprise the Hessian mercenary troops on Christmas night under the cover of fog that blanketed the Delaware River.

Emanuel Leutze completed the work in 1851 when the United States was finally emerging as a capable nation that had control over much of the territory in North America.

Leutze grew up in America and later returned to his native Germany as an adult. He would paint the famous work as an effort to encourage Democratic thought and revolution on behalf of certain European countries at the time.

The painting is easily recognized as a testament to one of the most historical victories over British forces, but there are a few slight inaccuracies that art critics and historians have pointed out over the years.

The boat in which Washington stands on the prow is well overloaded with soldiers and would have been nearly impossible for two men to stand in at one time without risk of tipping over.

The mission that Washington undertook actually happened under the cover of darkness instead of during the morning mist, as indicated in the work.

3. George Washington at the Battle of Princeton – Charles Willson Peale

One of the works that many consider to be the most likely to be an accurate portrayal of Washington instead of an embellished version of the man is a work done by Charles Willson Peale.

The 1782 work was done at a time when Washington’s military prowess was well noted and many sought to have him continue that leadership when the war ended one year later.

Later works would portray Washington with a much more square jaw, a trait that emphasized strength and leadership. Many historians have noted that this work features a much more believable portrayal of the figure as he is seen with a more rounded jaw and slightly average features.

A second work featuring Washington in his famous victory on the day after Christmas, 1776 is George Caleb Bingham’s work that is titled Washington Crossing the Delaware. Painted in 1871, nearly a century after the event occurred, this, too was another dramatic interpretation of what actually happened.

This work is almost equally fictitious to what the crossing actually looked like as Washington is seen mounted on his white horse, Nelson, who is said to have been the general’s favorite horse.

The fact that his horse is standing on a flat raft is a slightly more accurate depiction of the type of vessel that was likely used to make the crossing.

Bingham’s work is also noted as having chunks of ice in the water below as the downtrodden and exhausted soldiers are seen huddled under blankets in the frigid night air.

5. Washington at the Delaware – Edward Hicks

A much more realistic painting of the events that transpired at Washington’s army crossing the Delaware River was created by Edward Hicks in 1849.

This painting is not as highly regarded as the two that we have already mentioned as it has much less detailed aspects than the other paintings that depict the event.

However, Hicks did manage to capture what the crossing of the river was likely to have actually looked like as he actually viewed the specific location where Washington is said to have advised his troops to launch their boats into the Delaware.

The men can be seen hurriedly loading artillery onto the ferry boat as Washington as his officers are the last to cross the waters, which would have been much more accurate to the true events as he is said to have sent his troops across before him.

Another famous George Washington paintings that features his favorite horses is titled Washington at Verplanck’s Point.

This work was done by John Trumbull in 1790, after the war had ended, and was given to the first president’s wife, Martha, as a gift.

The painting depicts Washington surveying the departure of French troops under the command of Comte de Rochambeau, who had played a major role in helping the American forces defeat the British at Yorktown.

Washington is seen leaning against another one of his most beloved horses, an Arabian stallion and outstanding warhorse he called Blueskin. The Continental Army can be seen in the distance through the horse’s legs.

Shortly after the end of the Revolutionary War, an English painter named Robert Edge Pine is known to have painted what many consider to be of the most well-known early depictions of George Washington.

The work, done in 1785, is simply titled Portrait of George Washington and portrays the aging general in his uniform, his figure set against a darkened background.

This painting was done at a time when Washington had retired from his leadership position when many in the newly-established nation called on him to be their first official leader.

After enduring years of brutal war in which he lost many more battles than he won, Washington understandably needed a while to rest and recuperate before taking on such a monumental task as becoming the nation’s first elected president.

This work was done during the brief period in which Washington was resigned to his home in Mount Vernon after resigning his position as general of the Continental Army.

One work in particular among our list of George Washington paintings is undisputed to be the most accurate depiction to what the first president of the United States actually looked like in reality.

The work was created in 1772, before the Revolutionary War broke out, by Charles Willson Peale.

The painting is titled Portrait of George Washington Wearing his Colonel’s Uniform of the Virginia Regiment and was commissioned by Martha Washington to serve as a companion to her own portrait done in 1757 by John Wollaston.

There is no denying Washington’s youthful appearance and the somewhat rounded facial features that historians say were what the famous general and political leader truly looked like.

Among our list, only one painting features Washington engaged in the heat of battle.

Emanuel Luetze, who is also credited as being one of the most famous artists to have ever portrayed Washington in multiple works, produced this 1857 painting as another effort to highlight the valor and courage on behalf of those involved in the American Revolution.

Leutze was a staunch supporter for a Democratic-style government in Europe at the time and used his paintings as a means to bolster support from citizens of nations like his home Germany.

This particular work depicts Washington rallying his troops during a battle that went back and forth between British and American forces.

Washington and his troops would eventually secure victory after a brutal struggle with the British Royal Army.

An aging George Washington can be seen in another one of Gilbert Stuart’s works that was simply titled Vaughan Portrait.

The artist completed this painting in 1795 and remains one of the most famous portraits ever done featuring Washington.

The famous leader had been president of the United States for six long years at the time this portrait was done and his age was beginning to become evident when comparing this depiction to some of the earlier ones that featured him.

Many art historians note the appearance of Washington’s lively features and rosy cheeks, which are likely to be a testament to Stuart’s reputation for engaging his subjects in jovial conversation, often inducing laughter in his portrait sitters.

This would likely explain why Washington’s cheeks are reddened and he seems to be giving the viewer a half-smile, which was almost uncharacteristic for the famous leader of the United States.