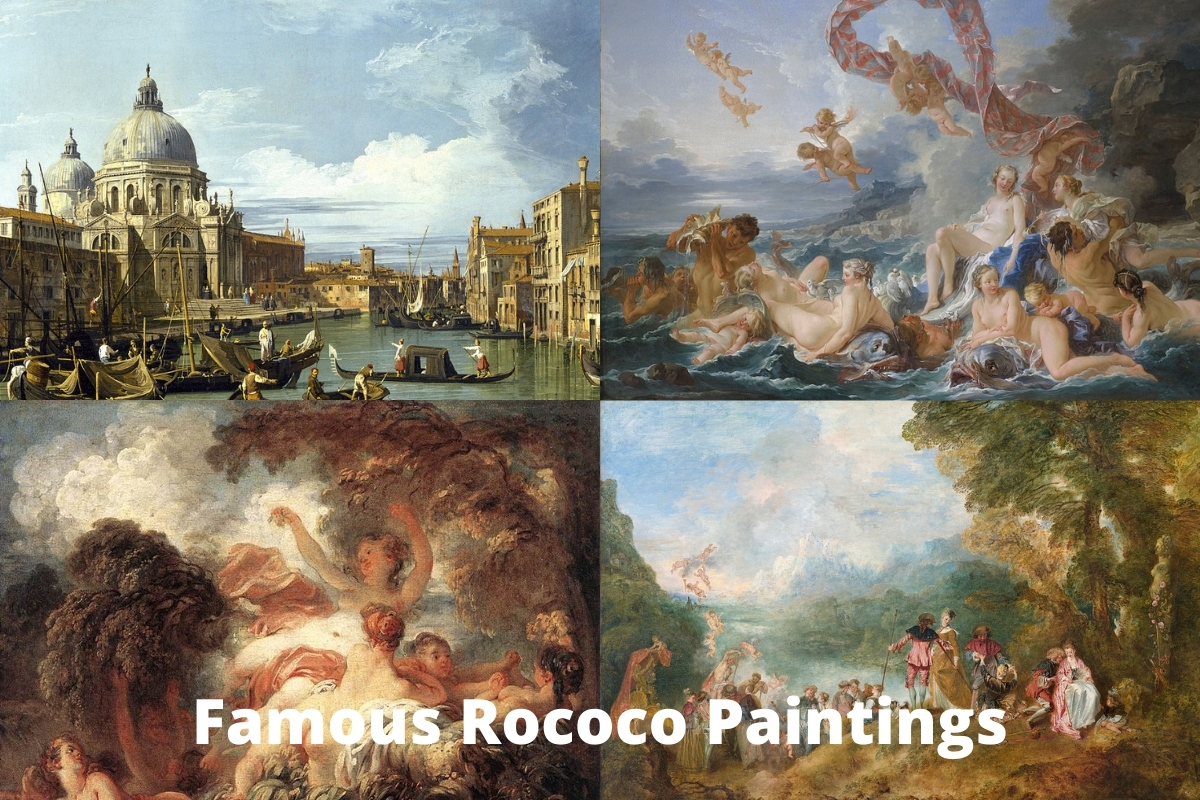 The Rococo movement is one that came about due to shifting social climate in France during the early 18th century after the death of King Louis XIV in 1715.

Many of the families and members of the ruling class and social elites moved away from the royal palace in Versailles after the king’s death and into the surrounding area of Paris.

Artists at the time became less interested in continuing the academic style of the Baroque period and started to explore new avenues of expression that led them into what we now know as the Rococo movement.

The Rococo style can be summarized by its tendency to feature elegantly dressed figures, flowing motifs, pastel colors and a lack of concern for symmetry. The movement began in France and would later spread to other parts of Europe as so many other art styles have done throughout history.

Those who worked in the Rococo movement had a peculiar flair for exuberance and often depicted their paintings with a sense of untamed natural beauty.

Although some of the big names from the era are not as noteworthy as the masterful painters from other periods, some of the most well-known paintings from the Rococo movement are also among the most famous works to have come out of Europe since the Renaissance.

1. The Embarkation for Cythera – Jean-Antoine Watteau

Few Rococo artists are more well-known from the movement than Jean-Antoine Watteau. He is celebrated as the artist who sparked the Rococo style in France during the early 1700’s.

Watteau was of Flemish descent during a time when France had just annexed the territory under King Louis XIV.

According to art historians, Watteau combined some of the Flemish style of painting along with painting techniques from the Venetian Renaissance in a way that was quite unique.

His most famous work is undoubtedly The Embarkation for Cythera, which he painted over the course of five years, finishing in 1717.

The painting features a group of couples who appear to be embarking on a trip to Cythera, an island in the sea near Greece that was known as the birthplace of the goddess Aphrodite.

Watteau painted each of the three couples in ways that appear to be in a different degree of courtship with flying cupids hovering over their heads in a manner that seems to indicate the purpose for the journey.

Jean-Honoré Fragonard was known as one of the most notable members of the Rococo movement. He painted several masterful works for the French royal family during his career, which spanned the latter half of the Rococo movement during the 18th century. He is best known for his work titled The Swing, which was painted in 1767.

This particular work features a young woman playfully swinging from a tree branch as a young man looks on from the bushes below her.

The angle of the man’s view is such that he would have a view from underneath the young woman’s dress, suggesting a sense of Hedonism that so often accompanied many of Fragonard’s paintings. There is another man that can be seen in the shadows behind the woman, pulling the swing with a pair of ropes.

This work was somewhat controversial during the time in which Fragonard created it as it was considered to be a bit too frivolous for societal standards during France in the 18th century.

François Boucher is arguably the most famous name from the Rococo era. His paintings often featured mythological figures or settings and his painting style would be one that truly transformed French artwork during his lifetime.

His technique was particularly distinct as most of the figures in his works were voluptuous in nature and often pictured in an outdoor setting.

Boucher created many works that were among the most famous paintings from the Rococo era, but his Triumph of Venus is perhaps the most well-known among art historians and critics.

The painting was done in 1740 and features the goddess Venus shortly after being birthed from the sea. She is accompanied by an array of nymphs, cherubs, and tritons, which were often incorporated into Rococo paintings.

The painting exemplifies the asymmetrical nature of Rococo artwork and established an affinity among other artists for using mythological figures in their own works.

4. The Entrance to the Grand Canal – Canaletto

No painter in history is quite as well known for creating Italian cityscape paintings as Giovanni Antonio Canal.

He was famously known as Canaletto, a name he was given after his father, who was a somewhat prominent figure in the Venetian art world.

During his career, he would roam throughout much of Europe, painting many different scenes from certain aesthetically pleasing locations throughout many cities.

His most well-known work is The Entrance of the Grand Canal, a painting which highlighted the waterway leading into the Italian city of Venice, which was a hotbed for artistic flair at this time in 1730.

The painting features the similar asymmetrical nature of other Rococo works and is credited as one of the most famous paintings created outside of France during the 18th century.

François Boucher was known throughout France for his ability to bring to life some of the mythological scenes from centuries earlier in Greek culture.

He was also heralded as one of the most famous portrait painters of the Rococo period. This particular work was the last of a series of seven different paintings featuring Madame de Pompadour.

This work was completed in 1759 and offers a view of the madame that is somewhat playful in nature, which was quite common to many Rococo works in the mid-18th century.

She is seen leaning against the base of a large statue and wearing the characteristic flowing dresses that were so common for elite members of French society to don during this period.

6. The Meeting (from the Loves of the Shepherds) – Jean-Honoré Fragonard

Jean-Honoré Fragonard was famous during the Rococo era for painting scenes that depicted a somewhat playful, Hedonistic setting.

He painted many scenes of young lovers engaged in romantic circumstances that were sometimes seen as taboo in French society at the time. Such was the case in his most well-known work titled The Meeting (from the Loves of the Shepherds).

This painting was created in 1772 and features a young man and woman, clearly engaging in a meeting which they are attempting to keep a secret.

The man is seen clamoring over the side of a wall while the young woman peers over her shoulder as if to ensure that they will not be seen during their soiree.

Jean-Antoine Watteau’s career was brief as he tragically died at the age of 36 from a bout with tuberculosis. Before his death, however, he is known to have created some of the most influential works of the Rococo movement.

His style was one of the more distinct of the entire French era during the 18th century.

His 1719 work titled Pierrot is among his most famous paintings as it features a number of actors surrounding a long figure standing on top of some type of platform.

The work is of a peculiar nature, but features many of the most common elements from the Rococo period.

8. Allegory of the Planets and Continents – Giovanni Battista Tiepolo

Giovanni Battista Tiepolo is known from the Rococo period as one of the more notable painters from Italy.

His Venetian upbringing heavily influenced his own artistic style, which featured many characteristics that can be traced back to the High Renaissance.

One of his most famous paintings was his 1752 work titled Allegory of the Planets and Continents.

This particular painting features an exuberant assortment of celestial figures that represent the many different planets, as well as Earth’s continents.

The painting is surrounded by a border composed of the many figures that can be seen dressed in flowing robes and pointing inward as if to indicate a sense of divinity in the painting’s center. Some of the figures in the painting represent people of Europe, Africa, America, and Asia.

Jean-Baptiste-Siméon Chardin had a special way of painting scenes in a somewhat simple perspective despite being part of the Rococo movement that was so often known for extravagant figures and large, open scenes.

He was one of the first painters to pioneer the Rococo movement shortly after the Baroque style had all but died out in France and Europe as a whole.

Many of his most well-known works focus on the playful nature of children, most notably his 1734 painting titled Soap Bubbles. The painting features a child in the act of blowing a bubble while a friend watches on from behind a ledge.

According to many art historians and critics, the painting does not seem to carry with it any sort of important symbolism or message, but rather is a straightforward work highlighting the innocent nature of childhood and the ease with which children are so often amused.

Jean-Honoré Fragonard began to develop a style that was unique in its own right during the Rococo movement.

The young artist was known for using more vibrant colors than his colleagues and often created works that were clearly different from the Rococo paintings of the early 18th century.

He is famously known for his 1765 painting titled The Bathers, which features a group of eight women enjoying a lighthearted bath in the midday sun.

The trees and bushes surrounding the women create a sense of border while the bodies are all arranged in different poses, each one with its own unique characteristics and personality.

Bathing scenes like this one were a common feature in Rococo paintings and there were a number of others who created scenes in which nude figures were seen bathing in an outdoor pool or flowing river.

This was one of the last paintings done by Fragonard that was publicly exhibited as he began solely producing work for private clients in 1767 shortly after this painting was finished.