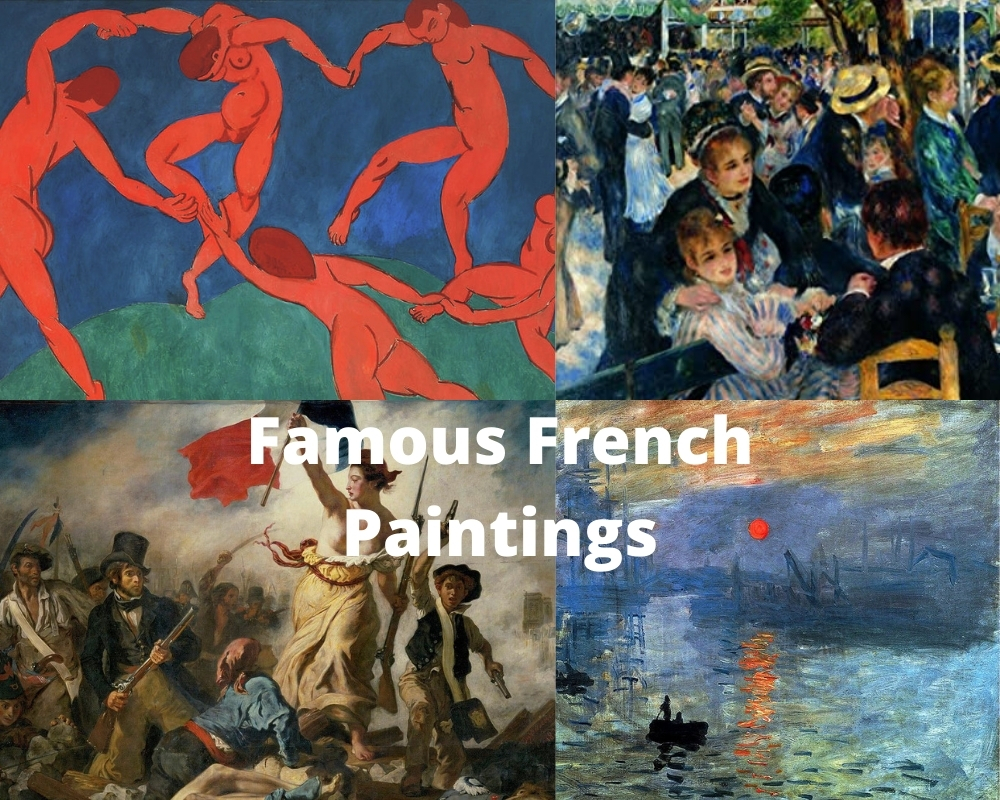 Many of the world’s greatest artists have hailed from France. France long been known as a bastion of artistic inclination and French painters have produced some of the most famous paintings ever created.

Artists like Claude Monet, Édouard Manet, Pierre-Auguste Renoir, Henri Matisse, and Paul Cezanne French painting is considered to be full of the most prolific artists in history.

One of the most popular styles of painting, Neoclassicism, rose in popularity in the 18th century and later would lead to 19th century Romanticism, which focused on emotional works that centered around realistic scenes.

Soon after Romanticism began to wane in the eyes of history, Impressionism would later make France the capital of the world from an artistic standpoint.

French paintings, in particular impressionist works are responsible for the birth of the modern art movement and the dramatic changes that swept through the art world since.

France has remained one of the most popular centers of art for much of the 20th century and the Louvre, located in Paris, is considered to be the most important and famous art museum in the world.

Here are 10 of the most famous French paintings in history.

Claude Monet is celebrated as perhaps the most famous French artist of all time and his work titled Impression, Sunrise is his most important work.

Monet was well known for painting works that would give birth to the Impressionist art movement in the mid-19th century.

This particular work was done in 1872 and features a seascape scene from Le Havre in France where Monet is said to have spent a considerable amount of time during his life.

The painting is one that is known for its subtle, yet captivating colors that depict a soft sunrise over the bustling port city during the time Monet painted this work. The larger ships and barges can barely be seen as they fade into the morning mist of the background.

A few lone boats are featured prominently in the center of the painting, pointing to a sense of simplicity that Monet either noticed or longed for.

It was exhibited with a number of other paintings from lesser-known artists at the time, but seemed to garner significant interest from everyone in attendance.

The painting has long stood as one of Monet’s most famous works and one of the greatest French paintings of all time.

Édouard Manet is known for his incredible works that make up part of the most significant periods of French art history. His work titled Le Dejeuner Sur L’Herbe was done in 1863 and remains one of the most recognized artworks in the country’s history for its unique level of detail, as well as the level of public controversy and notoriety sparked by the artist.

The painting features two men, full dressed, lounging on the grass in front of a nearby bath while a nude woman sits by, staring intently at the viewer. The three are seated near a basket of fruit, appearing to be enjoying a picnic together.

Another nude woman is also seen bathing in the background and many critics at the time viewed the work as distasteful and commented on the seemingly explicit nature of the subject matter.

Manet’s painting was rejected from being shown at the Salon during 1863 and the artist would go on to exhibit this and two of his other works at the Salon des Refusés. Despite its reputation, the painting has long stood as a symbol of French culture and remains among the greatest French paintings ever created.

French culture is rife with references to Liberty throughout its history since the French Revolution and into present day.

Eugène Delacroix’ work titled Liberty Leading the People is arguably the most iconic French painting ever done and is meant to commemorate the July Revolution of 1830 when King Charles X of France was overthrown.

Delacroix painted the work later that same year and features striking scenes of French revolutionaries engaged in a battle—some of them wounded and lying on the ground—surrounding Lady Liberty as she presses onward in the fight.

The lady is seen holding a gun in one hand and a French flag in another. This painting is viewed as one of the most inspirational romanticism paintings and is easily the most famous ever done by Delacroix.

Few French artists enjoyed such widespread fame as Pierre Auguste Renoir. His painting titled Dance at Le Moulin de la Galette is one that has long been hailed by art critics and enthusiasts as a masterpiece in the Impressionist art movement.

The painting was done in 1876 and features a scene of a typical summer Sunday afternoon in Paris during the time period.

Many of the local residents would gather at the Moulin de la Galette, which was close to Renoir’s home, on Sunday afternoons to enjoy the nearby cafes and dancing that would take place within the courtyard.

The work is known for Renoir’s unique ability to capture the lively atmosphere, as well as the artist’s uncanny ability to display the many different ways sunlight is peeking through the trees onto the dancing couples below.

This particular work has long been celebrated as one of the finest examples of Renoir’s paintings of everyday scenes.

One of Manet’s earliest works, the Absinthe Drinker is known throughout art circles as one of the most uniquely French paintings that was done during the Impressionist time period.

Few paintings done by Manet during this time period have survived as many were destroyed by the artist himself. However, this simple depiction of a man standing against a dark wall background is one that still remains.

The work is a portrait of a Frenchman named Collardet, who was known as a regular among social circles close to Manet during his time in Paris. The artist drew criticism from within his own circle of colleagues for the bleak portrayal of a drunkard.

Easily recognized as one of the most iconic works in the modern art era, Henri Matisse’s work titled Dance is known for its artistic flavor, as well as the controversial nature in which the painting was done.

The French art establishment were initially did not receive Dance very well and due to it’s primitive character and the use of only three colors which was typical of the Fauvist movement.

This painting was commissioned and done for a wealthy Russian collector in 1910 and features a scene of nude figures dancing hand-in-hand in a circle against a dark blue and green background.

The painting was chided for its primitive nature and Matisse drew criticism from many in the art community with this work.

However, many art enthusiasts view the work for its unique level of color depth as the dancing figures are all portrayed in a reddish hue while the ground is a solid green color butted up against a darkened sky.

7. Man with a Guitar – Georges Braque

One of the more substantial works in the Analytic Cubism movement, Georges Braque’s painting titled Man with a Guitar was done in 1911.

It is widely recognized for its strange, yet iconic appearance and is arguably the most famous French artwork since the beginning of the modern art era.

The subject of a man posing with a guitar is nearly unrecognizable upon first glance, but a closer look reveals a depth that is composed of many different levels of the same objects viewed at various angles.

The shapes seem to shift and warp as the viewer looks on, a unique effect that is heightened by the bland colors used by Braque to accomplish this work.

Among the most famous Impressionist artists from France, Camille Pissarro is widely known for one single work titled The Boulevard Montmartre at Night.

This painting was done in 1897 and is one of the most famous works featuring the French city as it is an incredible combination of colors highlighted by the flickering streetlights that illuminated French cities throughout the late 1800s.

Pissarro was well-known throughout the country as one of France’s most famous painters and later in his life, he would focus more and more on the country’s cityscapes where he spent much of his time.

This particular work is done from the perspective from a room in Paris at the Hôtel de Russie. This painting was never signed or exhibited during Pissarro’s lifetime and only rose to prominence after his death.

9. A Sunday Afternoon on the island of La Grande-Jatte – Georges Seurat

At the height of French culture in the late 19th century, people were known to gather at various places such as the lakes and rivers near Paris to enjoy the beauty of the outdoors together.

Georges Seurat’s work titled A Sunday Afternoon on the island of La Grande-Jatte captures a typical scene in which people of France are leisurely enjoying a warm summer day on the island near the water’s edge.

This work is known for the artist’s distinct technique of pointillism, which is on full display in every minute detail of the painting.

The painting was done between 1884 and 1885 and Seurat is known to have done numerous drawings and oil sketches of the work in order to perfect the exact portrayal of form, lighting and other elements in the work.

Paul Cezanne was known as one of the most famous Impressionist artists from France and his works are uniquely French in nature.

The Card Players was a painting he finished sometime in the 1890s and features two men seated prominently on either side of the canvas, engaged in an intense card game.

The artist was well known for his ability to depict abstract scenes in a way that enhanced the natural color and brought to life the life of the various figures contained in his works.

This painting was part of a series of works that focused on French peasants who spent much of their days engaged in card games and smoking pipes. Such mundane scenes are said to be among the most famous works ever done by the legendary artist.

We hope you have enjoyed out list of famous French paintings.