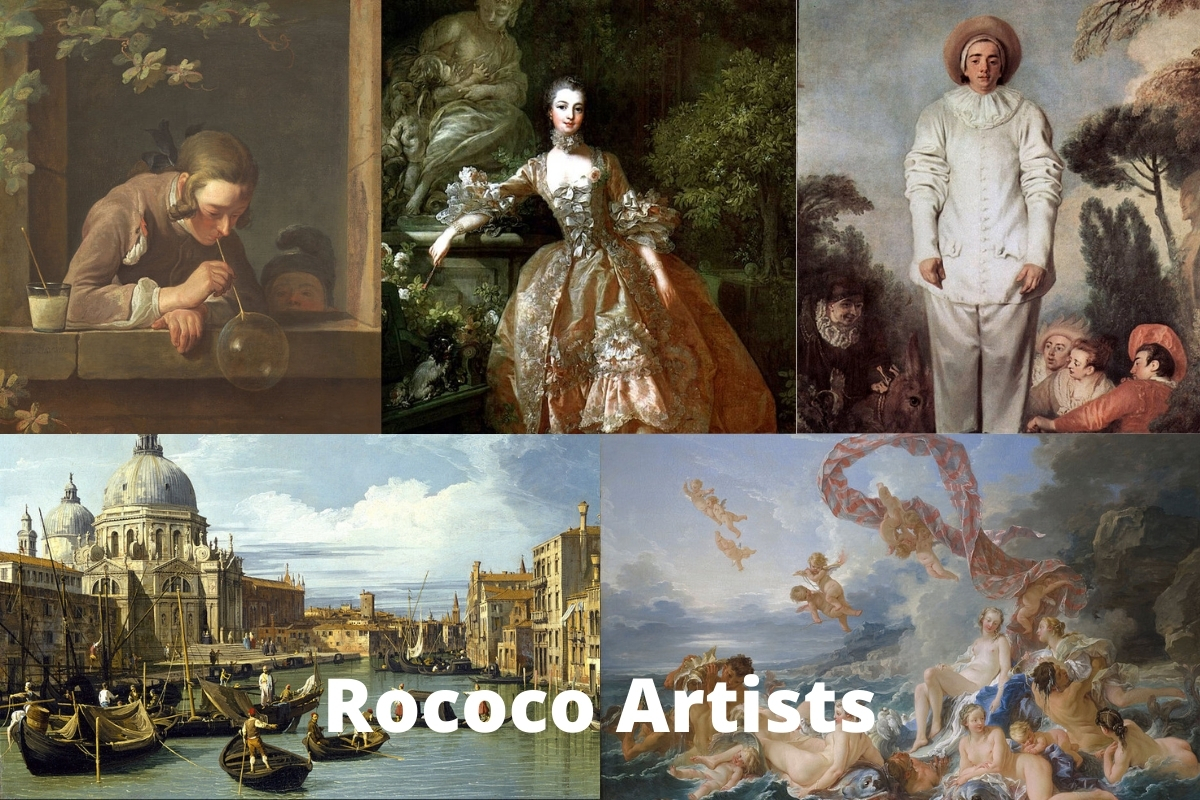 The Rococo art movement began as the Baroque period came to an end in Europe during the early 18th century. Originating in France, the Rococo movement started as a clear departure from the influences of French Classicism.

King Louis XIV’s death in 1715 marked the end of an era for many wealthy French families as they left the royal palace of Versailles and moved into private homes around the city of Paris.

The move brought with it an overarching theme that would be carried into French culture of the day known as the Rococo movement. It was styled after a sense of abundance and exuberance compared to the more straight-lined styles of the periods that preceded it.

The Rococo era was highly ornamental and intended to inspire a sense of awe in the viewer on every level.

Unlike the Baroque style that existed in the century before, the Rococo movement featured works that did not feature the same sense of symmetry or high contrasts between light and darkness.

Rococo painters worked in mostly warm pastel colors that were more pleasing to the eye than natural hues.

Many artists from the early Rococo period explored this new movement with the use of elaborately-designed works that included scrolling curves, and dramatic scenes.

Here are 10 of the most famous Rococo artists in history.

The most famous artist of the Rococo movement is undoubtedly François Boucher. Known for his portrayals of the many different mythological tales from ancient Greek and Roman culture, Boucher’s work would shape the Rococo movement as a whole throughout his lifetime.

He traveled to Italy as a young student of the arts and studied the late Baroque period, as well as the landscape style that was so popular in Dutch regions just a few years prior.

He garnered significant amounts of fame and notoriety among French artists of the day for his particularly voluptuous method of depicting figures in his works.

Many of his rococo paintings centered around pastoral scenes which featured shepherds with different types of livestock in flowing meadows.

Boucher’s most famous work is arguably Triumph of Venus (1740), but he was also known throughout Europe during his lifetime for such works as The Grape Eaters (1749) and The Breakfast (1739).

Jean-Antoine Watteau is certainly considered to be among the most notable artists of the Rococo period. He is credited as being the artist who pioneered the Rococo style after combining various elements of masterful painters like Titian and Peter Paul Rubens with his own particular flair.

His works are known for their especially colorful nature as Watteau selected some of the most vibrant hues for his works throughout his brief career.

His style was one that elicited other artists to explore a greater level of depth in both movement and color. The figures in many of Watteau’s most famous works can best be described as theatrical in a sense.

Some of his better known pieces include The Embarkation for Cythera (1717) and Pierrot (1719). He is perhaps best known for his work titled Pilgrimage to the Isle of Cythera (1717).

French painter and printmaker Jean-Honoré Fragonard is known as one of the most prominent Rococo painters of the 18th century. He lived during the latter end of the movement and created paintings that were known for their Hedonistic nature. Fragonard was known to have painted many works for the French royal family during his lifetime.

At just eighteen years of age, Fragonard was introduced to famous Rococo painter François Boucher after reputable individuals began taking note of his artistic ability. Boucher declined to work with Fragonard as he was woefully inexperienced and instead sent him to study alongside Jean-Baptiste-Siméon Chardin.

Fragonard went on to become one of the most prolific artists in French history with works such as The Stolen Kiss (1788) and The Meeting (1771), which was part of a series that was done for King Louis XV’s mistress.

One of the more peculiar artists of the Rococo period was Jean-Baptiste-Siméon Chardin who was well-known for his ability to produce incredibly-realistic still-life works. Chardin was one of the original group of French painters that first ventured into the Rococo style and would later be one of the most prominent figures in the era.

He came from humble beginnings, but through is artistic abilities, he managed to gain acceptance to the Royal Academy and would serve as master on the Académie de Saint-Luc in 1724. His work was exhibited regularly at the Salon in the 1730’s and 1740’s. Later in his life, King Louis XV granted him a special studio and living quarters at the Louvre.

Some of his most well-known works were still-life paintings such as The Buffet (1728), Basket of Peaches (1768), and Still Life with Plums (1730). He is known by art historians as one of the most influential members of the early Rococo movement.

One of the most famous artists of the 18th century was Giovanni Antonio Canal, who was best known as Canaletto. Born in Italy in 1697, Canaletto showed early aptitude for the arts and later developed into one of the most prominent artists of the Venetian school movement, as well as the Rococo style.

Born the son of a notable Italian painter by the name of Bernardo Canal, the artist would draw his famous moniker from his father’s own namesake as Canaletto is said to mean ‘little Canal.’

He was best known for his ability to portray cityscapes in a highly realistic fashion. Canaletto is known to have ventured across Europe during his lifetime, painting various scenes from the famous cities as he visited each one.

His works such as The Stonemason’s Yard (1725) and The Entrance to the Grand Canal, Venice (1730) were among his most notable paintings during his youth.

These pieces were done as the Rococo movement began to take shape in France and would later spread to Italy thanks to Canaletto’s efforts.

The French-born Rococo style made its way into England around 1735 after Hubert François Gravelot founded St. Martin’s Lane Academy. One of the academy’s most prominent members, Thomas Gainsborough, was a British artist known for his elegant landscapes, as well as the intrinsically-detailed portraits he had done.

Gainsborough is best known as an artist who fused together his two main strengths to create beautiful works of Rococo art which features rolling landscapes along with exuberantly-clad individuals. He is remembered as one of the most important English painters of the 18th century and is celebrated for his works that were done in the Rococo style.

Some of Gainsborough’s most notable works were of landscapes, but his single greatest piece in the Rococo style was The Blue Boy (1770).

One of the most famous female artists in French history is Elisabeth Louise Vigée Le Brun. Known for her extravagant portraits, Le Brun developed her artistic abilities during a time when women were not allowed to attend any of the formal art academies and schools. Instead, she was taught by her father, who was a somewhat prominent artist in his own right.

Le Brun had begun working as a professional painter at just 15 years old. While many art critics of her day shunned artwork produced by a woman, she managed to gain the attention of Marie Antoinette and King Louis XVI who placed her in the Royal Academy when Le Brun was 28 years old.

She would go on to paint some of the most iconic works in French history, her most famous being Marie Antoinette in a Court Dress (1778).

Maurice-Quentin de La Tour is among the most celebrated French painters, as well as one of the most notable Rococo artists in history. He is known to have painted some of the most prominent figures in France during the 18th century. The artist’s personality was one of note as he was one of the few painters during this time period to depict himself as smiling toward the viewer in many of his self portraits.

La Tour is best known for using a range of soft, pastel colors throughout many of his works. He painted such figures as Louis XV Voltaire, and Madame de Pompadour during his career. La Tour was commissioned to paint many of these figures as he was widely known for his abilities to portray his subjects in a soft, flattering light.

His works include a wide range of portraits, but the most notable work from La Tour’s career is Portrait of the Marquise de Pompadour (1748).

Like so many of the most well-known Rococo artists, Jean-Marc Nattier is best remembered for his portraits.

He was already an established painter when the Rococo movement began to take shape in France and would later become a prominent member of the era through his portraits of the royal family and other elite members of French society during the early 1700’s.

Nattier was not necessarily a portraiture artist by nature, but chose to paint in the style as tough financial straits forced him to gravitate toward the more lucrative form of painting during the early to mid-18th century.

He is credited with having a truly unique manner of portraying his subjects, many of whom are depicted as Greco-Roman goddesses or other figures that are linked to mythological lore.

His most famous works include a series of portraits of the ladies of King Louis XV’s court, which are all portrayed as wearing the same clothing and robes that are typically seen in paintings of mythological figures.

Giovanni Battista Tiepolo was a Venetian painter that became famous during the mid-1700’s for his overly elaborate works which often depicted royal figures. He studied under artists who were heavily-influenced by the High Renaissance and had a style of his own during the Rococo period that blended some elements of Renaissance painting with the newer movement.

His most famous work, The Marriage of the Emperor Frederick and Beatrice of Burgundy (1752), was centered on a historically significant event that was portrayed in classic Rococo fashion. The piece features an extravagantly-decorated hall with flowing curtains and arches, as well as each figure adorned in an especially elegant manner of dress.