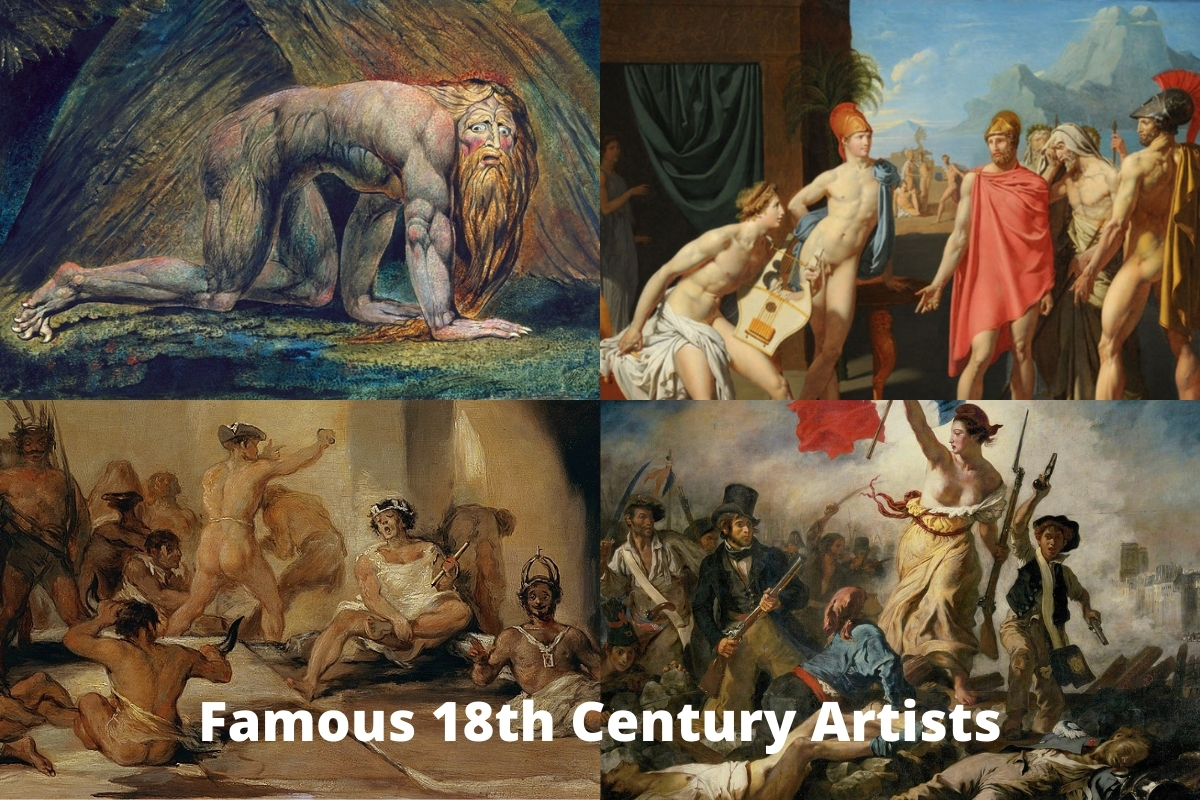 18th century artists were witnesses to two distinct yet dramatic changes in the world, the French Revolution and the Age of Enlightenment.

Both events had a profound affect on the world of art .

The Rococo and Neoclassicism art movements can be said to define much of 18th century art with Rococo art a continuation of the Baroque period whereas Neoclassicism was largely at odds with the Rococo style.

Below you will find a list of some of the most famous 18th century artists.

William Blake was born on November 28, 1757 in London, where he lived his whole life. Blake is best remembered as one of the greatest English painters, poets, and printmakers.

He is revered as one of the foremost figures of the Romantic movement, despite his lack of critical success while he lived. Blake was an observant Christian with strong hostilities to the Church of England and organized religion. His works exude a passion for imagination. Blake enjoyed exploring mystical and spiritual symbolism in his art.

Blake was longtime friends with Thomas Paine, and was for a time inspired by the American and French revolutions. He later rejected much of his thinking during this period.

His later works continued to show deep philosophical and spiritual themes combined with contemporary commentary. Regardless of his relative obscurity while alive, he is now considered one of the most creative artists in history. He died on August 12, 1827.

J.M.W. Turner was an English Romantic painter who is most admired for his landscapes, marine paintings, and watercolor work. Turner’s style is full of dramatic colors that convey deep emotion and introspection.

Born on April 23, 1775, Turner went by William during his life. His London family was lower-middle class and he would struggle with poverty until the end of his life. While he never married, he had two daughters with his housekeeper, which created much public controversy.

Turner was one of the most prolific British artists, producing over 30,000 paper works and 2,000 watercolors. Additionally, he painted over 550 oil pieces. His landscapes are especially noted for influencing the rise of later landscape pieces.

During his later years, his father’s death and his own poverty contributed to a growing pessimism. His work intensified alongside his suffering. Turner eventually succumbed to poor health and poverty on December 19, 1851.

Francisco Goya was a painter, portraitist, and printmaker who is one of the chief figures of the Spanish Romantic movement. Goya experienced massive critical and financial success in his lifetime.

Born on March 30, 1746, Goya’s influence was immense while he lived but grew even more after his death. He is renowned as one of the last of the European old masters and often labeled the first modern painter.

After being appointed the Spanish Crown’s court painter, he created many portraits of royals and aristocrats.

Goya’s life was full of difficulty despite his successes. He and his wife, Josefa Bayeau, suffered through numerous miscarriages. Only one child, a son, survived to adulthood.

Goya’s works took on more pessimistic themes in his later career, especially after he became deaf during an illness. After suffering with poor health for some time, he had a stroke and died on April 16, 1828.

Eugène Delacroix is remembered as the leader of the French Romantics during the movement’s heyday. Born on April 26, 1798, Delacroix lived until August 13, 1863, long enough to be one of the few old masters to be photographed.

Deeply inspired by the techniques of the Venetian Renaissance, as well as Rubens, Delacroix focused on techniques highlighting color and movement.

Delacroix favored his own style over the clear meticulousness of Greek and Roman classicism. Much of his style’s inspiration eventually grew out of North African art he encountered during his time in the region.

Delacroix’s works are marked by clear expressions of great individual moments of passion, which he felt should be portrayed with great exactness.

He often uses violent forces of nature to demonstrate his themes with powerful brushstrokes and striking colors. He often incorporated optical effects into his works, which especially drew attention from later French Impressionists and symbolists.

John Constable was a painter during the English Romantic movement who is prominent primarily for his landscape paintings. His works are considered to be revolutionary in landscape painting as a result of his many depictions of Dedham Vale, where he lived.

Constable was born on June 11, 1776 in Suffolk, now known as Constable Country. He poured himself into works that demonstrated his love for his home environment, describing his paintings as identical with his emotions.

Among his most important Romanticism paintings are “Dedham Vale,” “Wivenhoe Park,” and “The Hay Wain.” Constable was never a critical or commercial success during his lifetime.

He was more popular in France than his native England. Despite his relative obscurity at the time, his works are now ranked among the most valuable in British art history.

His popularity has grown since his death and he is one of the most popular figures in English Romanticism.

Jean-Auguste-Dominique Ingres was a neoclassical painter best known for his painted portraits and drawings. He was born on August 29, 1780 to a modest French family.

From an early point in his career, Ingres wanted to protect art against what he saw as the threat of popular Romanticism. In response, he devoted himself to Flemish and Italian Renaissance techniques.

His style matured and remained consistent to the end of his career. His contributions were vital for later modern artists including Picasso and Matisse.

Early critics saw Ingres’s art as bizarre, and his techniques were out of vogue. His great work, “The Vow of Louis XIII,” propelled him to prominence in the Paris Salon.

Critics soon recognized him as the leader of a French neoclassicism. Later, he redid his older works and many important portraits. Ingres died on January 14, 1867, three years after his final Orientalist work, “The Turkish Bath.”

John James Audubon was an American painter, naturalist, and ornithologist. His unique combination of interests led him to plan a pictorial record of all North American bird species.

Born on April 26, 1785, Audubon studied North American birds from an early age. He documented native species and depicted them in their natural environments.

His work, “The Birds of America,” contains his detailed color illustrations and is still held up as one of the greatest ornithological works in history.

Audubon identified 25 new bird species native to North America, and “The Birds of America” became a treasured handbook in scientific communities. He is held in high esteem by the National Audubon Society and ornithological circles worldwide.

Dozens of his original scientific names for North American bird species are still used by contemporary scientists. Throughout the United States, many streets, neighborhoods, and towns bear his name in his honor.

François Boucher was one of the great French Rococo artists a style that his name is synonymous with.. He was also an important etcher and draftsman. Boucher was born on September 29, 1703 in Paris.

His father was also a painter, Nicolas Boucher, and it was from him that he first received artistic training. Boucher’s early career was full of idyllic pieces focused on classical themes and allegories. He enjoyed painting pastoral landscapes. Boucher became one of the most prominent artists of the 18th century for his decorative style.

Boucher’s art is renowned for its definitive eroticism. His mythological pieces avoid more traditional depictions. Most of his works focus on depicting passionate and amorous feelings over epic themes.

He was an important designer of theater costumes and sets, as well as tapestries. He was a skilled, prolific draftsman. Boucher died on May 30, 1770, and his name has since become synonymous with French Rococo art.

Joseph Wright of Derby was an English artist who is renowned as the first significant painter to depict the spirit of the Industrial Revolution. Born on September 3, 1734 in Irongate, Derby, Wright’s family was made up of respected attorneys. He was the third of five children.

Wright painted mostly portraits and landscapes, with significant use of the chiaroscuro effect. This contrasts light and dark, made most obvious in many of his works depicting subjects in candlelight.

Some of his works portray science being birthed from medieval alchemy. These drew much inspiration from his association with scientists and industrialists of the Lunar Society of Birmingham. These pieces document the struggle of Enlightenment science and philosophy against traditional religious values.

Many of his works are displayed at the Derby Museum and Art Gallery, where he is still held up as an important native figure. Wright died on August 29, 1797.

Giovanni Paolo Panini was an Italian painter and architect. He is most widely known as one of the vedutisti or “view painters” who depicted Roman vistas.

Born on June 17, 1691, Panini worked primarily in Rome due to his fascination with the city’s ancient architecture and landscape.

His most famous paintings include the Pantheon’s interior and picture galleries with views of Rome. He often painted Roman ruins with embellishments that show capriccio themes reminiscent of artists like Marco Ricci.

Panini was a professor of perspective and optics. He taught at the French Academy of Rome and his work led to great advances in panoramic pieces.

He was renowned for his impressive manipulation of perspective, but he also painted numerous portraits for notable figures like Pope Benedict XIV.

He was commissioned to decorate numerous palaces and multiple royals valued his works. Panini died on October 21, 1765, in Rome.