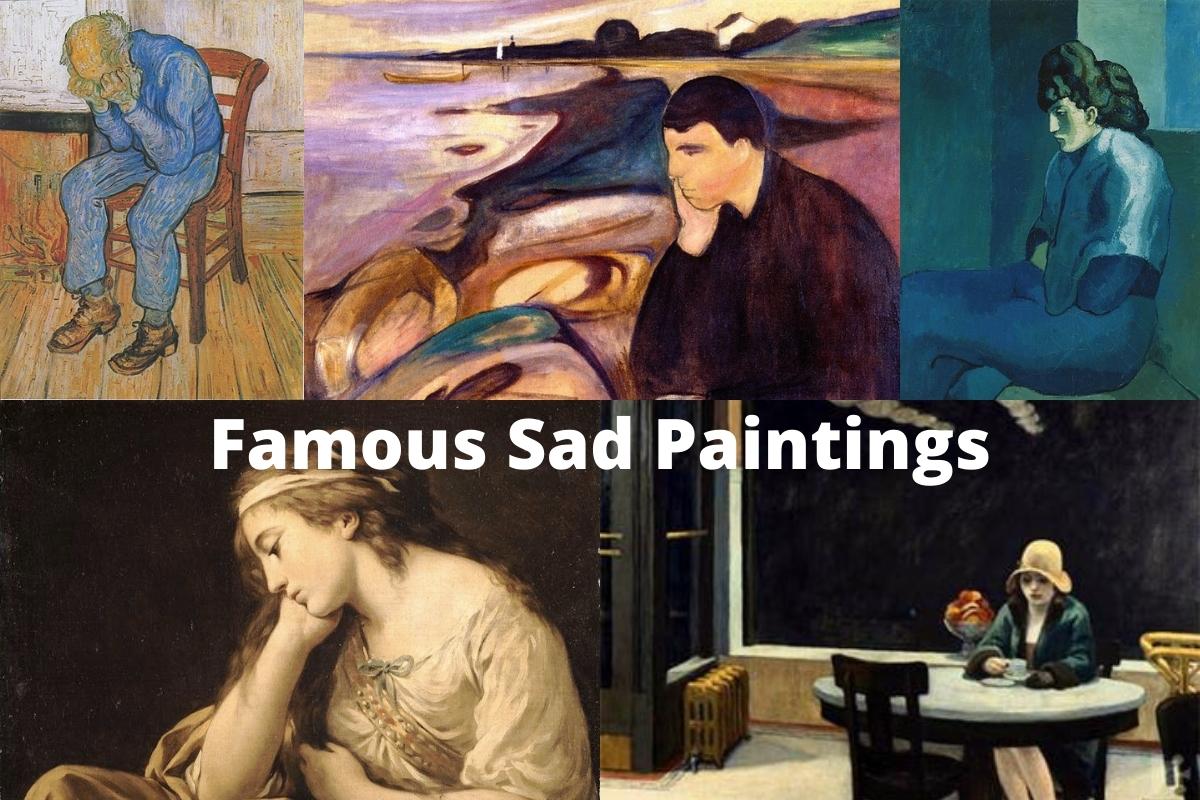 Melancholy and sadness have been the focus of many artists throughout human history. Sadness is an emotion that seems to overtake the human psyche and lead to an overall sense of desolation that is very hard to come out of for many.

Artists have used various mediums to express certain degrees of sadness and some of these works have drawn widespread acclaim from art critics and scholars over the last few centuries.

The many different paintings that have focused on sorrow and sadness are often as widely celebrated as those which depict joy and excitement.

In this article, we will examine 10 of the most famous sad paintings and explore the life events or influences that drove these artists to create such works.

Edvard Munch is one of the most celebrated painters from the late 19th and early 20th centuries. Many of his most famous works focus on the various stages of emotional development humans typically experience throughout their lives.

Munch is credited with producing a work which art critics point to as being the most famous melancholy painting from history.

The work is titled Melancholy and was completed in 1891 during a time that many scholars refer to as the Expressionism era.

Munch’s inspiration for work is said to have been an unhappy relationship with a young woman from his native Norway. The painting seems to depict Munch himself staring off into the distance along a shoreline.

They shore portrayed in this painting is said to resemble a popular destination for Norwegian families known as Asgardstrand’s beach.

Some art critics and historians have suggested that the artist included some suggestive images within the waters reflection that are congruent with the desolation felt by the artist during this time.

Andrew Wyeth was said to have been one of the most well-known artists that lived and worked in the 20th century.

He produced many works that focus on what life was like for many average American citizens which often included the necessity of hard work and the struggle to deal with the rigors of a fickle economy.

One of Wyeth’s paintings is considered to be among the most heart-wrenching works of art that’s ever been done.

The painting is titled Christina’s World and features an iconic scene in which a young girl is presented sitting in a field, looking back towards a lonely house on the prairie. The bleak and dreary colors of the grass, the sky and the home itself seem to communicate the sadness that the young girl is experiencing.

The girl in the painting is said to have been an acquaintance of Wyeth who was actually paralyzed from the waist-down.

The artist was captivated by the girl’s affliction and felt the need to express the loneliness which she was entrapped in while living in a sparsely-populated region when she should have been enjoying the most vibrant years of her life.

Few artists are said to have had as much influence over the latter portion of the post-Impressionist movement than Paul Cezanne. Many of his most prominent works feature religious themes that revolve around biblical stories from the New Testament.

One of these paintings features the famous figure of Mary Magdalene and is titled Sorrow (also known as The Magdalen). This work is believed to have been completed in 1869.

Cezanne’s father acquired a villa in a small French town in 1860. He allowed his young son to paint multiple works which he later hung on the walls inside the villa.

The painting is said to capture the sorrow felt by Mary Magdalene, who was one of Jesus’ closest followers shortly before his execution.

Louis-Jean-François Lagrenée was a widely celebrated artist during the brief, but popular art movement, known as the Rococo era.

The artist was a master at depicting the human form and did so in typical Rococo fashion, which included painting scenes in elaborate detail.

One of Lagrenée’s simple, yet captivating paintings is known as La Mélancolie. This highly-detailed painting is considered to be one of the most iconic works pertaining to the subject of sadness and melancholy from the 18th century.

The painting depicts a young woman dressed in flowing robes with various items of jewelry on her person, yet her face is fixed with a sad disposition.

Her expression is one of the most memorable from any of these sad paintings as it seems to encapsulate the sense of solemnness that often accompanies deep sadness.

Pablo Picasso is arguably one of the most famous Spanish artists to have ever lived. His works are described as being extremely unique compared to many of the painters who came before him.

Picasso was not afraid to explore the boundaries or ideals of Cubism and other novel approaches to artistic expression.

One of his most famous paintings is also a work which centers around the subject of sadness. The work is titled Femme assise (Melancholy Woman) and was completed in 1903.

Like so many of Picasso’s paintings, this one was enveloped in deep color that seems to dominate the canvas.

The painting depicts a woman slumped over with her head resting on her arm. Her expression seems to portray a sense of melancholy which is communicated using the deep blue tones throughout the entire work.

Absinthe was a popular drink in the latter half of the 19th century across much of Europe. It is a peculiar form of alcoholic concoction which often places those who consume it in a state of apathy towards themselves and others.

Edgar Degas was an artist who was likely well-versed in the effects of absinthe from a personal standpoint, as well as a societal view.

One of Degas’ most iconic paintings is simply titled  L’Absinthe. This 1876 work depicts what was very likely a typical scene among the various gathering places throughout France and other parts of Europe.

The woman in the painting is depicted wearing a hat and fashionable dress that was a common style during this time throughout Paris and parts of France.

Her fixed expression seems to portray an unshakable sense of sadness or melancholy that was likely brought on by the consumption of absinthe.

Edward Hopper is remembered as one of the most talented painters during the early 20th century American art scene.

Some of his most notable paintings are now considered to be iconic images of the 1920s and 1930s when Americans struggled to pull themselves out of the throws of the Great Depression.

Titled Automat, this work is said to accurately depict the state of detached melancholy that many Americans were plagued with due to the rapid changes in society that had been brought on by the Industrial Revolution.

This painting features a lonely young woman seated at a table staring blankly at her cup of coffee. The dark reflection of the lights seem to indicate the sense of emptiness she feels inside.

Vincent van Gogh was an artist who was no stranger to sadness and melancholy. Through much of his adult life, he had been afflicted with various mental health issues that were poorly addressed by physicians and psychologists during his lifetime.

He is certainly an artist who had a deep understanding of the level of sadness that is often depicted in these paintings.

One of van Gogh’s most iconic paintings related to the subject of sadness is titled At Eternity’s Gate. Like so many of his other works, this painting features the beautiful flowing brush strokes that were characteristic of van Gogh’s hand.

The painting depicts an aged man sitting in a chair, his head in his hands. He appears to weep at the realization that his life is coming to an end.

This painting likely depicts much of the same mental and emotional struggles van Gogh was experiencing at the time as this work was completed a mere two months before his death by suicide.

9. St. Jerome in his Study by Candlelight – Aertsen Van Leyden

Aertgen van Leyden was a masterful Dutch artist who lived during the 16th century. Many of his works centered around The Christian religion and included some of the most prominent religious figures from the time period.

One of Van Leyden’s most memorable paintings is that of St. Jerome in his Study by Candlelight. This work is believed to have been completed sometime in the 1530s and depicts the famous St. Jerome languishing over a book.

This book is believed to depict Jerome’s famous translation of the Bible from Greek into the Latin language. There are many elements throughout the painting which indicate various symbols and tenets of the Christian religion.

Van Leyden also included various small inscriptions and many other forms of symbolism that were relevant to the Catholic Church during the time of St. Jerome’s life.

Pablo Picasso experienced a phase during his life in which he was wracked with sadness and grief. After the death of a close friend, as well as various other personal issues, the famous artist went into a state of deep depression. His works, which he painted during this time, are referred to as taking place during Picasso’s Blue Period.

One of the most famous and iconic works from this blue paintings phase of his life is titled The Old Guitarist. The painting draws many elements from some of the most popular artistic movements during the early 20th century.

Completed in 1903, the painting is widely considered to be one of the most celebrated works from this era near the turn of the century. The painting depicts an old, frail Man who has an almost skeletal appearance clinging to an old, well-worn guitar.

Shortly before this painting, Picasso’s close friend, Carlos Casagemas, committed suicide shortly after a failed relationship. Picasso is said to have entered a state of deep depression and sadness which brought on a time of poverty for the artist who had yet to gain the fame he is so often associated with.

Picasso is said to have found commonality with the poor beggars after living alongside them during this time. He sought to portray the struggles of these poor individuals, who were often victims of depression and melancholy, through this painting.