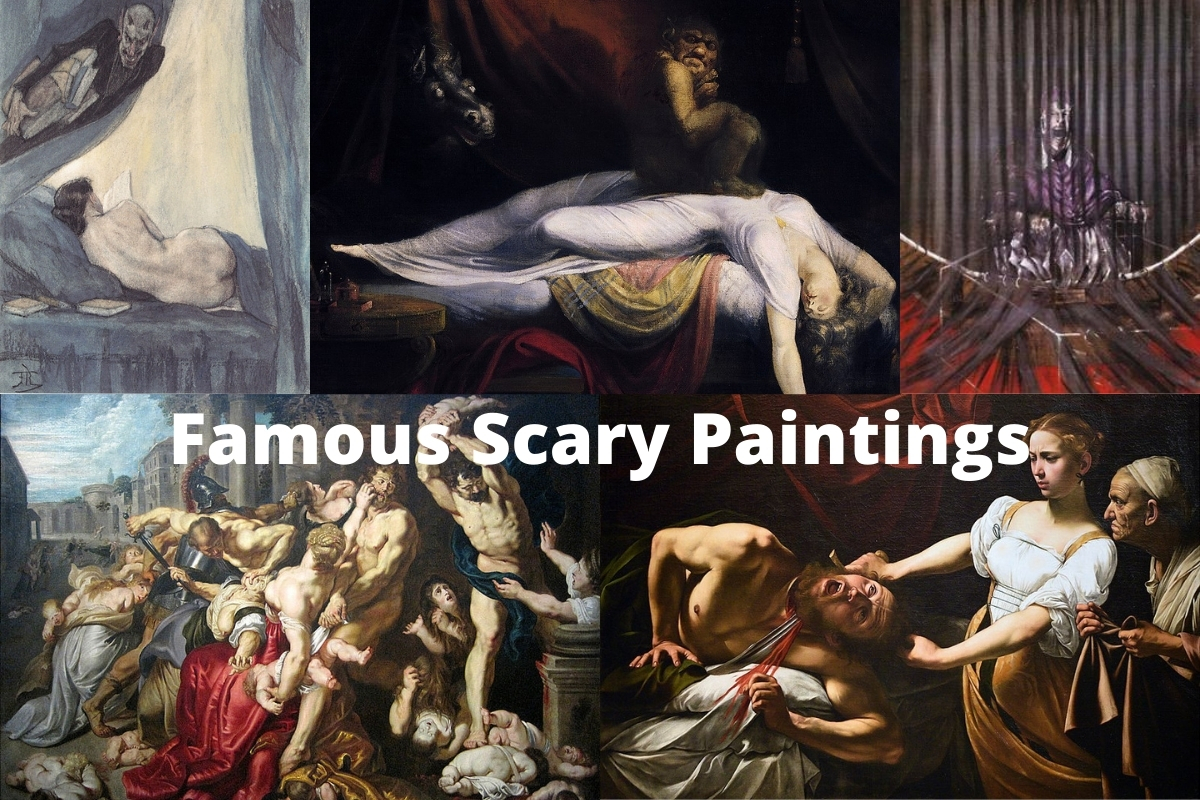 Centuries ago, paintings were one of the few ways that artists could convey visual messages and images to their viewers. Throughout history, there have been a litany of different works that focused on various themes from life and death to love, nature, and many other facets of human life.

Some painters produced works that touched on the horror element and created dark, sinister paintings that played on some of the deepest fears that people have.

Many of these works have somewhat of a religious element to them as people from centuries ago were much more heavily-focused on their own specific religious beliefs compared to today.

In addition to these demonic paintings are works that depict other scenes of terror and dread from various aspects of human existence.

In this article, we’ve compiled 10 of the most famous scary paintings from history and included the story behind many of these paintings to give you an explanation of their reasons for creating the work, as well as the effect they hoped to have on viewers.

In the 14th century, Dante’s Divine Comedy was the stuff of nightmares for many people in southern Europe. Written by Dante Alighieri in 1308, the long-form poem told a horrifying tale of one man’s journey through the depths of hell.

The story tells of there being nine different levels of the underworld, with each descending level being more evil and terrible than the last.

Several painters have attempted to depict their own interpretations of this poem in their works, but none have done so with as much acclaim as William-Adolphe Bouguereau.

His 1850 painting was done centuries after the poem was initially written, but seemed to portray the hellish nature of Dante’s Divine Comedy much more accurately and vividly than any other artist had ever done before.

The painting focuses on a single scene from the poem in which Dante is led by his guide, Virgil, to the upper levels of hell where damned souls were tormented much like what is described in the Christian Bible and other religious texts.

he background is filled with fiery, reddish glow and darkness as Dante and Virgil watch two men locked in an eternal struggle with one another.

Francis Bacon is remembered as one of the most celebrated artists of the 20th century. Born in Ireland in 1909, the painter had an early start in the arts and quickly grew fond of portraying the human form in various themes such as crucifictions, self portraits, and other works that were somewhat unique for the time period.

Bacon was heavily-influenced by some of the more notable figures from the Italian Renaissance, as well as Rembrandt and others.

One of his more striking paintings is known as Study after Velázquez’s Portrait of Pope Innocent. The work was done in 1953 and featured a ghostly, seated version of Pope Innocent that was based on a previous painting done by Velázquez of the 17th century figure.

The pope is seen as a reflective, misty apparition while the chair and other elements of the painting are also depicted in the same manner.

This was one of Bacon’s more controversial works as it depicted such a prominent religious figure as a ghost, which many people—even in the mid-20th century—found to be somewhat disrespectful. Nevertheless, many art critics and fans of Bacon’s work claim that it is one of his greatest masterpieces as it combines a somewhat sinister nature to such a notable religious leader.

Félicien Rops was a Belgian artist that dabbled in a variety of different mediums including painting, illustration, caricature, and other forms during the 1800’s.

Many of his more notable works portray an overwhelming theme that seemed to center around the occult or demonic nature. This was a style or genre that was seldom explored by artists, even into the 19th century.

What is arguably Rops’ most famous work is known as The Library or The Librarian and was painted in 1878. This painting was one that had a very dark, dreary overall tone mixed with what many describe as a demonic nature.

The painting depicts a nude woman lying in a bed reading a book. She is unaware of a large and sinister-looking demon hovering overhead, holding an arm-full of books as he smiles eerily down at her.

Francisco Goya is one of the more highly-revered painters from the 18th and 19th centuries that focused mostly on works that are described as being part of the Romantic era.

Born in Spain in 1746, Goya would go on to study much about the Greek and Roman mythology that was very popular among artists at the height of his career.

His most controversial and famous work is titled Saturn Devouring His Son. This painting is widely known for its grotesque depiction of the Greek myth involving Titan Cronus, which is named Saturn. The myth tells a story of Saturn devouring his sons and Goya aimed to portray this tale in gruesome detail.

The painting shows Saturn preparing to bite the left arm of one of his sons, who is seen covered in blood. It is clear that Saturn has already eaten his son’s head and the level of contrast between light and dark is very much at work here.

Born in the late 16th century, Michelangelo Merisi da Caravaggio would go on to become one of the most rebellious and celebrated figures of the Baroque era. He was in and out of jail for many duels and fights and was charged with multiple murders throughout his lifetime in Italy and the surrounding area.

Just like the events of his life, many of Caravaggio’s paintings were seen as somewhat controversial to an extent.

One of his most well-known religious paintings is also one that is quite scary in nature. It depicts the story of Judith from the Bible as she cuts off the head of Holofernes.

The painting was finished sometime around the year 1600 and was done in vivid detail, which Caravaggio was known for.

The work portrays a horrified Holofernes surprised at his demise at the hands of a beautiful and delicate woman like Judith. Her elderly maid, Abra stands next to her holding a blanket which she likely intended to use to cover the face of Holofernes.

Sleep paralysis is a very real and terrifying phenomenon for thousands of people across the world. It is usually described in the same manner, with the person being awake as they lie in bed, but unable to move their limbs and head except for the eyes.

These encounters have varied in nature and some have described seeing and feeling some sort of demonic presence positioned on their chest, squeezing the breath out of them as they lie helpless in their bed.

This is precisely the events that are depicted in Henry Fuseli’s 1781 work which is titled The Nightmare. It is not clear whether Fuseli himself dealt with sleep paralysis, or whether he had studied the phenomenon, but his painting shows that he had a clear understanding of the horrible nature of this type of event.

His painting depicts a sleeping woman lying on a bed with a short, dwarf-like demon perched on her chest. There is another demonic figure that can be seen in the background as well and many critics and historians remember this painting for its disturbing nature.

7. The Massacre Of The Innocents – Peter Paul Rubens

Some of the paintings on our list are not centered around the mysterious and the occult, but are instead focused on real events from human history that are truly horrific. Peter Paul Rubens was a Flemish artist who lived in the 16th and 17th centuries. He focused largely on religious works in the same way that many other Baroque painters did.

One of his paintings depicted one of the more gut-wrenching stories from the Bible that many historians point out as having some supporting details for its validity.

The painting is titled The Massacre Of The Innocents, 1608, and features a scene of a story from the Gospel of Matthew. The story tells of the killing of young boys as part of an atrocious decree that was given by King Herod of Judea at the time shortly following the birth of Jesus.

There is some historic evidence of this being true as some historians from the time period have referenced the order and the effect that it had at the time in Judea.

There have been some truly horrendous methods of execution that were used at various times throughout human history with some being much more cruel and unusual than others.

The electric chair was the chosen method of executing those found guilty of terrible crimes during much of the 20th century in the United States. Artist Andy Warhol created on work that focused on this method of execution.

The silk screen ink on synthetic polymer paint on canvas work is titled Big Electric Chair and was done in 1964 by Warhol during the height of popularity for this extreme method of killing that many authorities said to be faster and less cruel than the previous methods like hanging or firing squad.

There were some at the time who were against the idea of executing people with the electric chair and Warhol’s painting is a grim and dark reminder of this method during American history.

9. The Face Of War – Salvador Dalí

Salvador Dalí is one of the most well-known surrealist painters in history whose work focused mainly on subjects that were at the forefront of the Surrealist movement.

Many of his paintings involved portraying somewhat normal figures in very distorted and unusual ways that seemed to grab the attention of the viewer and cause them to think about the subject in a different manner.

One of Dalí’s more famous paintings is titled The Face of War and was done in 1940 at a time when World War II was ramping up across Europe. Dali was a native of Spain and was no stranger to the horrors of war. This painting depicts a giant horrifying head that is filled with ghastly faces in the eyes and mouth of the figure.

Dalí’s message was clear, there is nothing good or pleasant about war and only horrible, dreadful things come of it. He would go on to paint other works that worked as his own form of protest against the war that gripped the world in the 1940’s.

Theodore Gericault was a French painter born in the late 18th century. He was a somewhat prominent figure in the Romantic movement and many of his more notable works featured some of the more widely-recognized works from the era.

He was no stranger to creating dark paintings as he is credited with painting works like The Raft of Medusa and others with a sinister theme.

One of his more controversial works that is remembered as one of the more scary paintings from history is titled The Severed Heads. Painted in 1818, the work depicts two severed human heads posed on a white cloth.

These heads are gruesomely depicted in vivid detail and are viewed as being in some of the initial stages of decomposition, which adds to the painting’s horrifically scary nature.