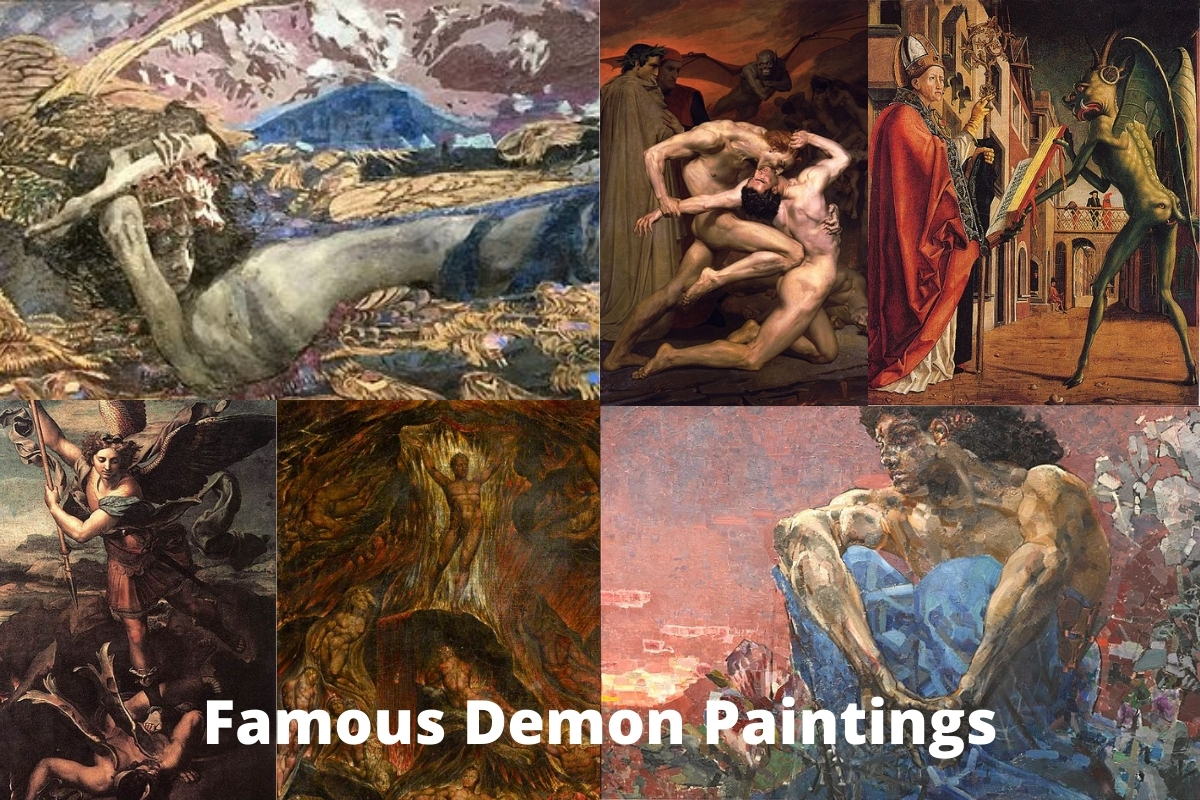 Humanity has long been fascinated with the idea of a spiritual realm that’s invisible to our mortal eyes, yet exists in the same reality that we live in.

Religions across the world all teach of the perils that come with a lifestyle that’s filled with evil deeds and some even equate a person’s malevolent actions to their being possessed by some form of demonic entity.

Artists throughout history have shown a keen interest in the supernatural, most famously as it pertains to the Judaeo-Christian belief system.

In the Bible, we read of many stories in which people are afflicted by demons or some type of evil entity. Many of these artists depict such stories or possibilities in their works by painting angels and demons alongside mortals.

In this article, we will review 10 of the most famous demon paintings ever done and examine the motives that the artists had in creating them.

Mikhail Vrubel was a Russian painter who lived and worked in the late 19th century when many artists were taking new and fresh approaches to the subject of the supernatural.

In the centuries before this time, most artists painted works that could be directly tied back to the Christian church or stories from the Bible.

Vrubel was one artist who chose to depict his idea of a demon in what seemed to be a more personal and believable manner than other artists had done until this time.

Vrubel was inspired to paint a series of works after reading a famous poem by a Russian poet named Lermontov.

Vrubel created as many as 30 different works that depicted this demonic being in various types of scenes, mostly outside and alone. His iconic work out of this series is one that’s known as Demon Seated, which was done in 1890.

The painting shows the demon sitting on what appears to be a hillside, his legs tucked up close to his body as if he’s seeking comfort from some sort of torment.

Vrubel used heavy amounts of bold, dark coloration in this work to symbolize the power of the demon and the fact that it is very much real to the artist.

Many artists have created works throughout history that can be directly tied back to one single manuscript known as Dante’s Divine Comedy.

This story tells us the fictitious account of Dante as he is taken down into Hell and shown the different levels of torment that the damned souls are forced to endure.

One artist that created works pertaining to this story was William-Adolphe Bouguereau.

Bouguereau was a French painter who focused his efforts on creating various scenes of mythological significance. He worked during the late 19th century and one of his best known paintings is known as Dante and Virgil.

This work depicts Dante standing next to his guide in the Underworld, Virgil, as the two look on at a never ending struggle between two damned souls.

Virgil explains to Dante that these two men are locked in an eternal fight against one another with no end in sight and no clear objective other than to torment one another.

The painting has very high levels of detail and the nude bodies of both men are further highlighted by the reddish hues of everything else around them.

Henry Fuseli was a Swiss painter who lived most of his life in Britain where he began to study painting from a very early age in the mid-1700’s.

He is remembered as one of the more prominent artists from the Romanticism period and his works are remembered as having very bold details and significant contrast between light and dark that symbolizes good and evil.

Fuseli painted one of his most famous works in 1781 while he was living in Britain. The painting is famously titled The Nightmare and features the distinct scene of a young woman lying in bed with a demon perched atop her on her chest.

This painting is symbolic of a real phenomena that’s commonly referred to as sleep paralysis and many people report experiencing an encounter with what they describe as a ‘sleep paralysis demon.’

This phenomena is likely the inspiration behind Fuseli’s painting and it is unclear whether the artist himself or someone else had such an experience.

The painting is noted as having an impressive level of detail and the artist uses chiaroscuro to communicate the difference between good and evil using light contrast.

Another painting from Mikhail Vrubel’s famous series on demons is one that’s considered one of the more well-known demon paintings in Europe.

This famous Russian painting was titled The Demon Downcast and was done in 1901 or 1902, according to art historians. This painting is of a large, sweeping landscape that Vrubel depicts as being filled with distorted natural scenery and a striking sunset in the background.

The demon of this painting is seen as being in severe grief or weakness as he is centered in the painting’s foreground. Vrubel first painted the demon and spent a considerable amount of time deciding on what he would paint in the background to complete his work.

He chose to paint high, pearly mountains after receiving a photograph of the Caucasus mountains from a friend.

The painting has the distinct jagged edges that Vrubel was known to incorporate into his works.

This makes the painting appear almost like a stained-glass window that you might normally find in a church. Most of the painting was done with a knife, which was characteristic of Vrubel’s other works.

William Blake was a highly-celebrated English painter and poet who created a number of memorable paintings from his era in the late 18th and early 19th centuries.

His works are remembered as some of the most notable of the Romanticism period and feature distinct coloration and symbolism.

One of his most famous works is known as Satan Calling Up His Legions. This painting was created in 1804 and depicts Satan standing atop a rocky outcrop in Hell as he calls out to his demons in an effort to summon them.

The painting has a very sinister appearance with harsh reddish coloration and dark undertones. The idea behind the painting is believed to be Satan gathering his forces for the final battle against God and his angels.

Michael Pacher was an extremely gifted German artist who lived during the 15th century. He was one of the few painters who tried to incorporate Renaissance styles and practices into his paintings.

Pacher was known for his works that feature various religious figures from the time period or the years shortly before his birth when the Catholic church flourished in this part of Europe.

One of his most memorable paintings was titled Saint Augustine and the Devil. This work is believed to have been completed in 1475 and features St. Augustine staring down Satan as the evil leader of Hell and his demons holds up a book that he appears to be encouraging St. Augustine to write his name in.

The painting depicts Satan as having a very twisted and monstrous appearance that other artists had previously not done.

Jacob de Backer the Younger was another artist who lived in the last stretch of the Renaissance era in northern Europe in the 16th century. He had an impressive career, despite his untimely death at the age of 30.

One of his best known paintings is one that features all of the most prominent religious figures from the Christian Bible in both the Old and New Testament.

The painting is titled The Last Judgement and is believed to have been completed in 1580. It depicts Jesus as hovering over the world and everyone over the top of the clouds and surrounded by a host of angels.

The work is featured on three separate panels with various religious leaders from what was then present day and prominent figures from the Bible such as John the Baptist and the Virgin Mary.

One of the most famous works pertaining to demons from the Renaissance era was done by Raphael in 1518. The work is titled St Michael and the Devil, but is also known as St. Michael Vanquishing Satan.

Raphael completed the painting after he was asked by Pope Leo X to revisit the story of St. Michael defeating a demon.

The painting depicts a triumphant St. Michael swooping downward on top of Satan, who is depicted as being thrown down and pinned to the ground.

St. Michael is shown standing with one foot on Satan’s back while he clutches a sharp spear in his hands and is readying himself to finish his adversary.

Salvator Rosa was a famous Italian painter who worked during the Baroque period of the 17th century. His painting style was widely considered to be ‘unorthodox’ by many art critics and fellow artists at the time.

Rosa, like most other artists during this period, focused heavily on religious themes in most of his paintings.

One of his most memorable works is titled Anchorites Tempted by Demons.

This painting was done in 1660 and features a large open stone structure that depicts the famous story of the Anchorites, who were men who had withdrawn from society to live a life of intense prayer and devotion to God, and how they were tempted by demons.

Another one of the most famous demon paintings was done by the well-known Dutch painter who lived and worked in the early Renaissance period.

Hieronymus Bosch is credited with creating some of the most notable works from this era as many of the most famous Renaissance painters had not emerged yet. Like most other artists from this time, his works were deeply tied to religious themes from the Bible.

One of his most famous paintings is simply titled Hell. This work was done some time after 1490, but art historians are not quite sure of the exact date.

The painting is part of a four-part series of works that all pertain to the afterlife, both good and bad. In this painting, the damned souls are seen in agony at the bottom of a large rocky outcropping next to a lake.

In Bosch’s depiction of Hell, we see the damned souls being tormented by demons who bite them and twist their limbs as they sit in agony in an eternal state of hopelessness. This four-part series of hell paintings is currently on display in the Palazzo Ducale in Venice, Italy.