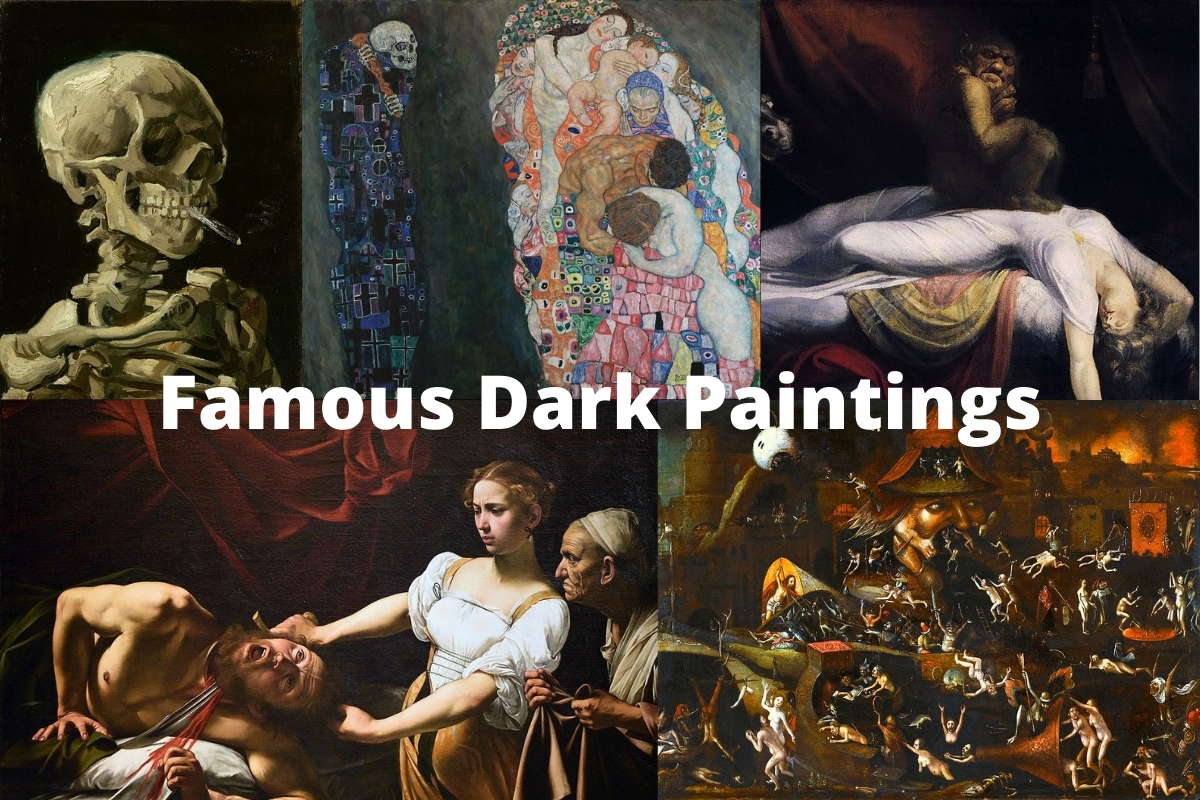 Some of the most notable paintings ever created have been done around the subject of that which humans consider to be darkness.

This element of darkness is representative of evil as this metaphor seems to translate throughout any culture and language barrier in existence.

Many of the most celebrated painters throughout history have dabbled in themes of darkness and evil at some point in their careers.

According to some of the most prominent art critics and historians, elements of darkness are seemingly unavoidable for painters who truly explore their own ability to express their innermost thoughts. The main reason for this is that darkness and evil seems to lurk in every corner of our existence.

In this article, we will explore some of the most famous dark paintings ever done and discuss why these works are viewed with such high esteem.

There are few paintings throughout history that evoke such a strong sense of darkness or grotesque nature as Francisco Goya’s famous work titled Saturn Devouring His Son.

This painting has long been on that grabs the attention of viewers in a way that is straightforward and ugly, yet somehow captivating at the same time.

Done in 1823, Goya’s painting was an instant hit with art galleries and exhibitions throughout the world for its truly unique nature.

No artist had ever displayed such brutal and terrifying imagery in one single painting.

Goya was already a notable artist among some of the most famous Romanticism painters of the time period, but this work is arguably his most popular as it delves into a level of darkness and depravity that few artists dared to explore.

The work features the Greek god, Saturn, who is seen devouring his own son. This painting harkens back to a famous mythological story from the Greek culture in which Saturn is said to have devoured his own children for fear of being overthrown by one of them.

The freakish physique of the Greek god and the overall undertones of evil are part of what makes this work one of the most famous dark paintings in history.

The Romanticism era was one in which artists created many works that depicted some of the more beautiful areas of life and the many pleasantries of their own cultures.

Few painters dared to produce works that might invoke a sense of dread or terror in the viewer, but that’s precisely what Henry Fuseli did in what many consider to be his most notable work.

This demon painting is titled The Nightmare and features a dark, sinister scene that many have said to be able to relate to. The 1781 painting portrays a sleeping woman sprawled across a bed, her arms hanging down to the floor as if she is in a very deep state of rest.

The woman’s slumber is seemingly being disrupted by a demonic creature that is perched atop her chest.

Doctors have actually documented many such instances in which patients claim to be almost fully awake during the night, only to have some sort of demonic or evil presence sitting or pressing down on their chest, nearly suffocating them.

This is likely the source of inspiration that Fuseli had for creating this work and is part of why it is included in our list of the most famous dark paintings ever created.

Adolphe Bouguereau is known as one of the most celebrated artists from the Neoclassicism period that took place throughout the 18th, 19th, and 20th centuries.

Many of his most famous paintings featured the human figure—especially those associated with Greek and Roman gods and goddesses.

One of the most well-known paintings he ever created was of the famous legend of Dante and Virgil, which is basically a scene from the famous work Dante’s Divine Comedy, which was a narration of Dante’s trip to the underworld, or hell.

This painting depicts a particularly gruesome scene in which Dante and his guide, Virgil, look upon two damned souls who are locked in an everlasting torment that consists of endless combat.

The painting depicts the two figures in the nude, locked in a brutal fight in which one of the souls overpowers the other and bites his opponent on the neck.

There are also images of winged demons in the background who also look on with a sense of delight while Dante is revolted at the sight before his eyes.

Vincent Van Gogh is known for creating some of the most vivid and beautiful paintings in history.

The artist was unquestionably gifted when it came to painting, but his works often portrayed the deeply-tormented mental state that he dealt with throughout much of his life.

One of the artist’s most famous dark paintings was one that seemed to have an element of comedy, as well as darkness to it.

The 1886 work is titled Skull With A Burning Cigarette and features a strange, but captivating scene of a skeleton figure posed in a calm and relaxed fashion while smoking a cigarette.

This painting is believed to have been created during one of Van Gogh’s manic stages in which the artist may have been experiencing a deeply depressed state.

Van Gogh would struggle with these intense episodes throughout his life and would later slice off his own ear in a fit of manic rage just a few years before taking his own life.

5. The Face Of War – Salvador Dalí

Salvador Dalí is hailed as one of the most well-known artists from the Surrealism period and many art historians and critics have credited the painter as being the ‘father’ of the movement.

He certainly produced works that appeared to explore the vast depths of the human psyche, with many paintings focusing on a twisted, warped sense of reality.

One of his most famous works is titled The Face Of War.

Painted in 1940, many art historians and critics believe this work was representative of the personal trauma that the artist himself had experienced as a result of growing up in war-torn Europe during the early 20th century.

The painting depicts a pain-stricken face that is set in a barren landscape. The face and head are blackened as if to represent decaying flesh while snakes are seen crawling out of the holes and crevices in the figure.

Few artists have delved into the terrifying beliefs and imaginations of what the idea of hell represents. Hieronymus Bosch, a painter from the Renaissance period, is one such artist who created a series of works on the subject of the afterlife, one of which is one of the most famous dark paintings ever done.

In Bosch’s series, he produced four distinct paintings that feature various scenes from the divine world.

One of the works simply titled, Hell, was created around 1490 and was one of the first paintings ever created that truly focused on the idea of the damned and the prospect of an eternity in torment.

This painting wasn’t necessarily packed with detail, but features a few elements that highlight the sinister nature of the idea which hell represents to those who are religious or not.

Another worthy addition to our list of the most famous dark paintings is Gustav Klimt’s painting known as Death and Life. This work was created during the Nouveau period that was prominent in his home country of Austria during the early 20th century.

The 1915 work features two distinct clusters of images and figures that are distinctly separated by a black void. The painting is believed to represent the idea of the afterlife and that which many people seldom stop to think about.

This unique painting has some elements of the eroticism that Klimt was known for while also providing the viewer with many different smaller figures that are all mashed together in a strange collage.

The Renaissance period was filled with some of the most unique paintings ever created as many artists were exploring new and exciting realms of existence, both real and imagined.

Hans Memling was a German-born painter during this period that was known for working with oils on wooden surfaces.

One of his most famous works is also among the most iconic paintings from the Renaissance era.

Titled, Triptych of Earthly Vanity and Divine Salvation, this painting was done in 1480 and features three distinct elements that are representative of life as we know it, as well as two possible outcomes that we reach upon our death.

Caravaggio was famous for his ability to produce paintings that emphasized the difference in light and darkness, which very clearly indicate good and evil throughout many of his most notable paintings.

In 1599, he finished one of his most distinct works ever that the artist titled Judith Beheading Holofernes.

The painting is based on the Old Testament story of Judith killing the Assyrian ruler after she manages to lure him into a sense of comfort.

The painting was hailed for its intense level of detail in every minute aspect, from the expression on the face of Judith, as well as that of Holofernes as he is seen writhing in pain.

The elements of light and darkness are masterfully used in this work to indicate the triumph of good over evil in such a simple act of definitive vengeance by Judith.

Félicien Rops was an artist hailing from Belgium during the mid-19th century who was well-known for his use of dark, veiled colors.

He was not quite as famous as many of the other artists from this time period, but Rops was well-respected among his peers as one of the most masterful painters when it came to exploring the depth of various colors and elements that might otherwise be shrouded in mystery.

One of his most well-known paintings is known simply as The Library. This work was created in 1881 and features a nude woman stretched across a bed as she is enveloped in the words of the book she is reading.

The painting also depicts a devilish figure floating overhead, holding a bundle of books in his arms.

This work is one that is both unique and beautifully done as the entirety of the painting is engulfed in the same dark-blue coloration that seems to indicate a sense of evil associated with the particular book the woman is reading.