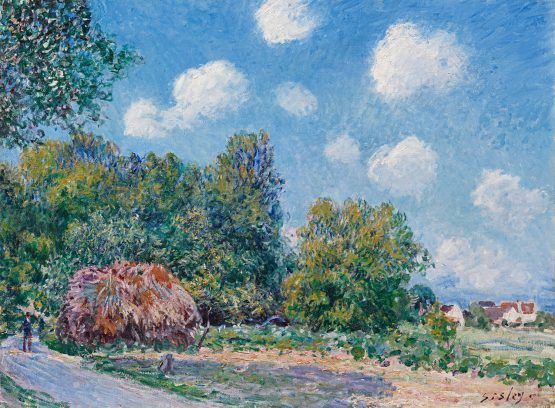 Alfred Sisley is the underdog of the art world. Despite having a talent and skill for impressionism, he has been overshadowed by his famous contemporaries, such as Pierre-Auguste Renoir and Claude Monet.

In light of this, let’s dedicate this piece to one of the figureheads of impressionism, Alfred Sisley.

Alfred Sisley was born in Parents to English Parents. His father, William Sisley, was in the silk business, and his mother, Felicia Sell was a music connoisseur. Alfred was sent to London at the age of 18 to study business, but he dropped out of university after four years and returned to Paris.

In early 1862, he began studying at the atelier of Swiss artists Marc-Charles-Gabriel Gleyre. There he met Frederic Bazille, Pierre-Auguste Renoir, and Claude Monet.

All of them would paint landscapes in the open air to realistically capture the lighting and effects of the sunlight.

Doing so resulted in colorful paintings. The approach was deemed innovative in those times, and painting were created in the public eye.

Sisley and his fellow artists had fewer resources and opportunities to showcase their artwork at the exhibitions.

Unlike others around him, Sisley received a hefty allowance from his father until 1870, after which he became poor.

There is no record of Sisley’s work in his younger years. The earliest painting was believed to be painted in 1864, ‘Lane near a small town.’

His earlier landscape paintings depict a sombre tone, with dark brown, pale blues and green colors. They are often painted at Maryl and Saint-cloud.

In 1866, he got into a relationship with Eugenie Lesouezec, also known as Marie Lescouezec. She was a Breton residing in Paris. They had two children.

He spent most of his adult life in bad financial conditions, especially after his father’s business failed in 1870. He would make ends meet by selling his artwork. His artwork rose in monetary value only after his demise.

In 1880 Sisley and his family moved to a village near Moret-su-Loing. It was close to forest Fontainebleau. Most of the painters of the Barbizon school had worked there.

Art historian Anne Poulet has stated, “the gentle landscapes with their constantly changing atmosphere were perfectly attuned to his talents. Unlike Monet, he never sought the drama of the rampaging ocean or the brilliantly colored scenery of the Cote d’Azur.”

Sisley lived in Paris for most of his life, apart from a few trips to London in 1874, 1881, and 1987. Although it has been suggested that J.M.W Turner and John Constable influenced the artwork, little is known about his relationship with their paintings. He may have possibly come across their work on his trip to London.

This landscape painting was displayed in an exhibition at the Salon in 1868. It depicts a hunting trail going through a thick and lush forest close to La Celle village. Sisley painted the subjects twice before, and the intense color scheme and subject matter resemble the paintings of the Barbizon school.

Footbridge of Argenteuil is a painting that showcases modern life at the end of the 19th century. The subject matter is not something Sisley would paint. However, the painting is still representative of his style.

This painting is inspired by Japanese prints, where the focus is mainly on the composition. The bridge flattens composition and dominates the entire canvas. He used lines that evoke the sharp movement mimicking the speed of modern life.

The balance between the dark and light colors is harmonious and enables the eyes to move quickly from one point to another, giving the illusion of movement.

The River Loing at Saint-Mammes

The River Loing at Saint-Mammes was painted in 1885. It shows a port where Seine and Loing rivers meet. Sisley painted this many times when he was living in Les Sablons. The Painting suggests it’s a summer afternoon due to the lack of shadows and warm, intense colors used in it.

The canvas is divided into four planes, the river, the beach, the grass, and the sky. He has painted the grass with diagonal curving brushstrokes that flow into the river, and then, he used short horizontal brushstrokes. He has used a cream color to divide the beach sand from the river along horizontal lines.

Sisley was mostly a landscape painter. His work is differentiated from his colleagues because of their use of soft, harmonious values.

Some of his early work is inspired by the delicate and restricted palette and style of Camille Corot. The silvery tonalities used in paintings by Corot’s reflected in some of Sisley’s artwork.

His snowscapes were particularly liked. Most of his famous and spontaneous artwork was executed between 1872 and 1880 in different neighborhoods of Paris, such as Bougival, Sevres, Meudon, Maryl, and Louveciennes.

Sisley painted his landscapes using the impressionist art style. He used simple forms, a colorful palette, and a broken color. His work resembles that of Monet, but his use of color was much more conservative. It has been suggested that in some cases, his use of color was a bit too restrained.

The Legacy of Alfred Sisley

Despite being a popular impressionist artist, Alfred Sisley received little to no success and recognition while he was alive. To this day, he is understudied in comparison to his contemporaries.

The reason for his lack of scholarly consideration is his national identity that was fractured. He retained his English citizenship, and upon applying for French citizenship, he was declined twice.

Despite being rejected, he became the founding member of French Impressionism and carried out the movement’s original school of thought throughout his career.

Sisley’s early work was a link between the Barbizon school and the modern impressionism. Even though he was not involved in the post-impressionist movement, his use of texture and color was deemed innovative and evoked an emotional response.