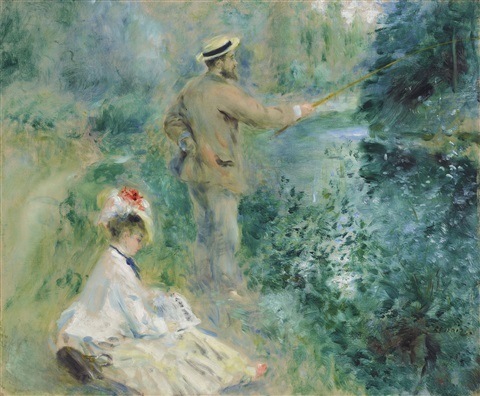 Pierre-Auguste Renoir was one of the most significant artists of the Impressionist movement. Despite the physical difficulties that his deteriorating health imposed, he produced a large body of artwork throughout his life.

Read on to learn more about one of the pioneers of Impressionism and a life touched so stunningly by art and beauty!

If there is anything that can add more color and soul to artwork, it is beauty and joy. And what better way is there to turn both into eternal bliss by capturing it on a canvas!

Mediterranean landscapes, portraits, bathing nudes and young women embroidering or playing the guitar – every work of Auguste Renoir is a depiction of beauty and happiness.

The French artist Pierre-Auguste Renoir was born in Limoges, France to a family of artisans. His father, a tailor by profession, moved with his seven children and wife to Paris in 1845.

Renoir showed a natural talent of painting at a very young age. Much to his benefit, his parents took little time in acknowledging their son’s gift. Hence, they apprenticed him to work in a porcelain factory at the age of 13.

This early era of his lifetime can be marked as a beginning of a life-long journey of painting.

Renoir learned to decorate plates with bouquets of flowers at the factory. Soon, he was also decorating fans and cloth panels for missionaries to hang on the walls of churches.

The immense joy that Renoir found in painting encouraged him to pursue his learning in the field of art.

In 1862, after saving some money, he started taking evening courses in drawing and anatomy at the École des Beaux-Arts. He also started taking painting lessons from Charles Gleyre at his studio.

Renoir did not agree much with the academic style of his teacher, but he decided to continue learning the elementary skills that he needed to become a professional painter.

At his time at the studio, Renoir bonded with three other students, Alfred Sisley, Claude Monet and Frédéric Bazille.

All four students shared a dream of an art that would surpass the limitations of traditional art. They believed in creating art that should be much closer to life without the need to tell a story.

Renoir and his friends would spend a significant amount of time in the scenic forest of Fontainebleau. It became their favorite spot to indulge in plein air painting.

However, unlike Claude Monet , Mary Caasatt and Sisley, Renoir maintained his preference for painting traditional portraiture in the settings of a studio.

During the summer of 1869, Renoir and Monet would paint at La Grenouillère, a lakeside boating resort. It wouldn’t be wrong to say that La Grenouillere can be regarded as the birthplace of Impressionism.

During these two months, both the artists began to use broad brushstrokes to capture the natural movement of water and the beautiful effects of light.

In 1871, after returning from his military service during the war, Renoir’s painting career began to go downhill. Due to the unfinished quality of his newer techniques, his work was more rejected by the Salon than accepted.

Unlike his colleagues, Claude Monet and Camille Pissarro, he continued to submit his work to the Salon until 1873. Later in 1881, Renoir wrote to his dealer, Durand-Ruel:

“In Paris, there are barely fifteen collectors capable of liking a painter without the backing of the Salon. And there are another eighty thousand who won’t buy so much as a postcard unless the painter exhibits there.”

After 1873, when Impressionists’ works were largely rejected by the Salon, Renoir with his fellow impressionists, began to plan an independent exhibition.

The first exhibition was held in April, 1874 where Renoir sold a few works. What was more significant of this exhibition for Renoir was that he met the the collector Victor Chocquet there.

The portrait that he painted of him then brought the much needed financial support during this time. After this, he gained more financial independence through portrait commissions.

This success made him grow weary of the ideology of spontaneity in Impressionism. By the early 1880s, he seemed to have parted ways with Impressionism.

Consequently, Renoir adopted a more unique style in the last stage of his career. While Monet and Edgar Degas brought abstraction into their artwork, Renoir continued to have a more solid and sculptural approach in his work.

Auguste Renoir was one of the most prolific artists of his time, whose work has been frequently reproduced throughout the history of art.

Most of Renoir’s work is unique for their vibrant light and saturated colors. It mostly focuses on people in intimate and candid behavior. During the period of his early maturity, he produced impressionist paintings for the most part.

It was the works by Raphael and other Renaissance masters that he saw on his tour to Italy that convinced him he had deviated from his real path. During the next couple of years, he adopted a more solid style with defined outlines in an attempt to return to classicism.

Some of his most famous works include:

The subject matter of Renoir’s most famous paintings broadly comprises of landscapes, family scenes and portraits of public places, like The Luncheon of the Boating Party.

The first thing to notice about his subjects is that they are always cheerful and care-free. It seems he took pleasure in painting portraits that were a depiction of life, joy and realism. Female nudity was also a primary subject of his paintings.

Most of his work is also Impressionist in nature with broken brushstrokes and vibrant colors to capture the effects of light and movement of his subjects.

Even when he painted en plein air, he emphasized greatly on human subjects that stand out from his fellow Impressionists’ works.

He is also a very accomplished pastel artist and completed many great works in the medium.

Somewhere around 1892, Pierre-Aguste Renoir fell prey to rheumatoid arthritis. Despite his failing health, he continued to produce great art pieces throughout his life.

In the year 1907, he retired to the warmer climate of “Les Collettes,” a farm at Cagnes-sur-Mer, close to the Mediterranean coast.

Even when arthritis left him wheelchair-bound and he started developing deformities in his hands, he adapted his painting techniques accordingly. He would have his brush strapped to his paralyzed fingers.

He would also create sculptures by instructing an assistant. He would use moving canvas to make up for his limited joint mobility. Needless to say, even when it seemed impossible, he refused to let any hindrance come in his way for his love of art.

Only on December 3, 1919, death became his final obstruction that parted the world from the masterpieces of his exceptional brushstrokes.