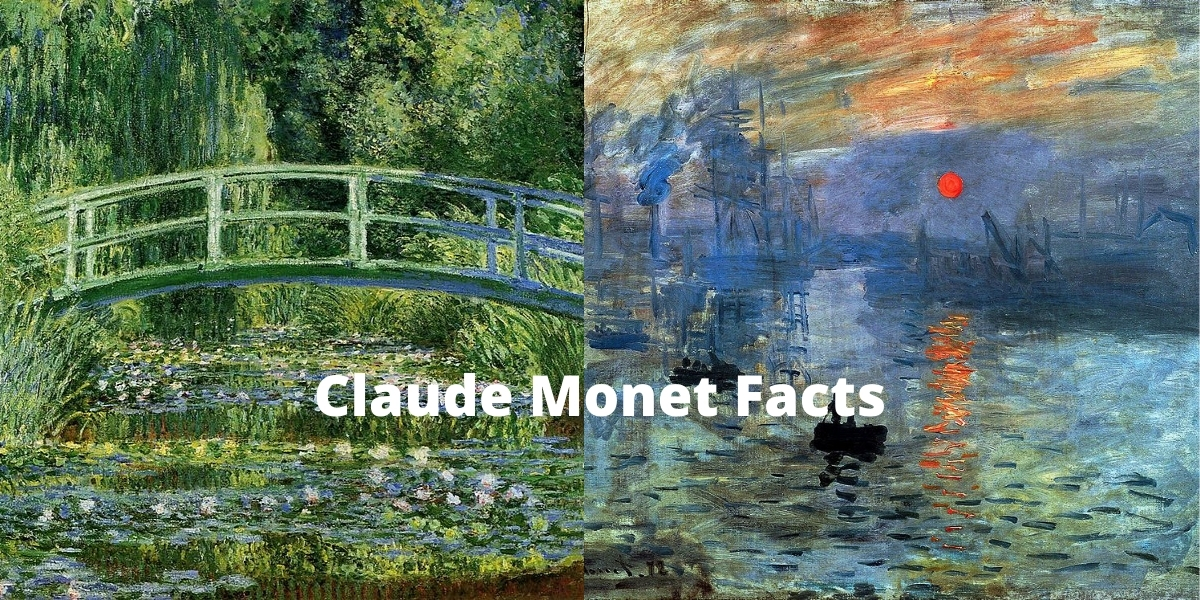 Claude Monet is one of the world’s most famous artists, known for capturing the French countryside’s true essence like no other painter ever has. He was born in 1840 and died less than a month after his 86th birthday in 1926.

Nearly a century after his death, Monet’s paintings are still sought globally by art enthusiasts, and his remarkable expertise arguably remains unmatched.

He pioneered the impressionist style of painting, which remains popular in the world of art. Claude Monet managed to be successful despite the critics of that era not embracing his painting style.

He still managed to outshine most of the greatest artists of his era effortlessly.

Here are a few facts about Claude Monet covering his work and life that are important to note.

1. Monet Started Art As A Child

Art consumed Claude Monet’s entire venture except for a short period when he carried out military duties. His military life was short-lived due to his contracting Typhoid Fever and having to return home.

Monet started his art venture as a young child doing funny drawings of people and earned money. The support he got from the general community for his caricature art inspired him to apply to art school. He then joined a group of young artists and ventured into oil painting as a teen focusing on the outdoors.

2. His Father Did Not Support His Dream

Monet’s parents were at odds with his decision to pursue art. His mother encouraged him to go after his dream and then supported his wish to develop his skills by enrolling in art school.

However, his father was not as receptive to the idea of his son taking up art professionally. His desire was for Monet to take over the family grocery business when he retired.

With the household’s discord, once his mother died in 1857, Monet immediately relocated to Paris, where he delved into his art studies at Academie Suisse.

3. His Future Wife Was His Model

Monet and Camille dated for a while and she posed for many of his paintings, including the famous “Woman in the Green Dress.”

She modeled up to the point where she got pregnant with their firstborn, Jean. Three years after Jean’s birth, they got married.

Monet received a painting order, but the artwork was so large that he could not complete it in time to be displayed.

The painting, however, did not go to waste as it was cut up into several pieces and can now be found in several art galleries on display.

As Monet continued capturing the outdoors while living in Paris, the critics took notice and liked his work.

The critic’s impression of his work quickly changed as he did an eight-foot painting in the outdoor light, entitled, “Women in the Garden.”

Monet placed a lot of time and effort into the painting, so when the critics scoffed at it, his psyche was severely affected, leading him into a state of depression. He reportedly attempted suicide.

Even though Monet was initially doing well, he spent so much time on the “Women in the Garden” painting, which didn’t get approved, that he went broke.

War then broke out, and the newlywed Monet skipped town with his bride Camille to dwell in London. He got support from Paul Durand-Duel, an art dealer who helped him get back on his feet.

7. Impressionist Was Meant To Be An Insult

Monet made friends with popular artists and soon began to be recognized as well.

During a major art show featuring his work and other significant artists, a critic referred to their short stroke paintings as “Exhibition of the Impressionists.” He was slyly suggesting that their art was unfinished and needed more work.

Ironically, Monet had a painting named Impression, Sunrise which was what the critic used to disclaim his work.

However, instead of being insulted or falling into depression again, Monet became even more motivated to continue his extraordinary style of light effects paintings.

Monet took his paintings to another level with tons of vibrant colors. He caught the effects of the light on them in varying ways.

Retaining the Impressionist name, his work gained attention and began selling a lot. His success was so much that Monet was able to stage an art show in the United States.

If time-lapse can be used in reference to art, that’s exactly what Monet did with his paintings over the next few years.

He would do a painting multiple times to capture every kind of lighting, and he was excellent at it, drawing the attention of renowned artists across the globe. It was also referred to as painting in series.

Not only did he capture the different light effects throughout the day, but he would capture the same scene in different weather, a style of painting that was unheard of but appreciated.

Some of his most outstanding light series paintings are haystacks and the Parliament building in London.

Also of note is the painting of the Rouen Cathedral, in Normandy.

Monet painted many buildings and landscapes, but one of his favorite topics was his family. He did a slew of art featuring his first wife Camille along with their two sons Michel and Jean.

11. Monet Was An Atheist

Monet grew up in the church as a Catholic. However, as he grew older, he began losing his faith in God. He eventually became an atheist.

12. He Bought A Floating Studio

At age thirty-three, Monet acquired a little boat that he stacked with art supply. The small vessel became his floating studio.

From this angle, Monet was able to see and paint the landscapes with a whole new lighting effect. He also used his boat studio to paint illustrations of his friend and fellow artist Édouard Manet and his wife.

Manet returned the favor by capturing Monet as he painted in his floating studio in the company of his wife, Camille.

13. He Created His Own Landscape

Monet was not just a landscape painter, but he, in fact, designed the landscape himself.

His famous lily garden paintings were among the 250 oil paintings he did during the latter years of his life.

Monet designed the artist’s garden at Giverny to certain specifications in order to burst with color and to capture the sunlight in an array of ways.

While it might be hard to believe, Monet completed his last set of work while on the verge of blindness.

He had cataracts that covered most of his eyes, yet he captured the landscape in the most breathtaking way.

15. Monet’s Work Is Worth Millions

In the modern era, Monet’s water lily paintings are worth an average of 20 million pounds sterling.  In 2007, one sold for 18.5 million and another for 40 million a year later.

As the decades go by, Monet’s work continues to increase in value, and his legacy as the great Impressionist lives on.