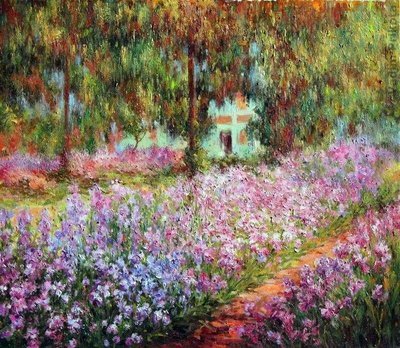 Claude Monet painted The Artist’s Garden at Giverny in 1900 and is one of is finest expressions of color of any of his landscape paintings.

Monet moved to the house in Giverny in 1893 at the time the property was rented and looked substantially more farm like or rural than the manicured gardens they would be transformed into.

By 1890 Monet’s popularity as an artist had significantly increased and so too had his finances which allowed him to purchase the property outright.

Over the next few years with the help of two full time and several part time gardeners he was able to transform the garden at Giverny into the explosion of color and structure that it is today.

Most of his impressionist paintings were painted en plein air and in earlier life these were of much larger scenes of rolling country side or urban settings.

However the countryside offered little control to the artist in terms of color and how it changed throughout the year.

Later in his life he retreated to his garden where he had the ultimate control over nature.

The Artist’s Garden at Giverny

In The Artist’s Garden at Giverny we can see Monet’s masterful use of color that is given order or structure by the very strict lines of the flower beds.

Every square inch of the garden at Giverny was planned including the addition of a substantial pond which would form a large part of the artist’s body of work; the famous Water Lilies and Japanese Bridge series of paintings.

Monet would spend the best part of the last thirty years of his life refining the garden and the different species of flowers and plants contained within it.

The garden makes up a very large portion of Monet’s body of work along with the scenes from the surrounding areas.

It was a big departure from the Monet Haystacks series of work that were painted out in a local farmers field.

Monet’s love of color and distaste of darker tones is evident as there is very little earth on show, almost every plane or surface is covered in either varying shades of green or a burst of vibrant color.

In the painting Claude Monet gives us a master class in brush work as he used very short definite strokes that give an almost 3D feel to the painting.

The diagonal row of irises draw the eye back towards the weeping willow trees that cast a shade over the rear half of the picture.

Through the trees we are given only the slightest hint of his house behind them.

At the front darker shades of greens for the flower stems and browns for the pathway suggest more shade in the foreground.

With the color of the flower petals being more muted.

It is in the middle of the painting however that we see a burst of vibrant color as the sun reflects off of the brilliant purples of the irises.

Known as one of the founding members of the impressionist movement Monet had spent the best part of his adult life refining his technique and brush work to bring his canvas alive by manipulating color and it’s relationship to the objects in question.

This can be seen through many of his works in particular the Rouen Cathedral series.

It is currently housed at the Musée d’Orsay as are so many others works of the artist.

Like most of Monet’s paintings The Artist’s Garden at Giverny captures the light in such a way that the viewer is almost transported to the location and can see the scene through the artist’s own eyes.