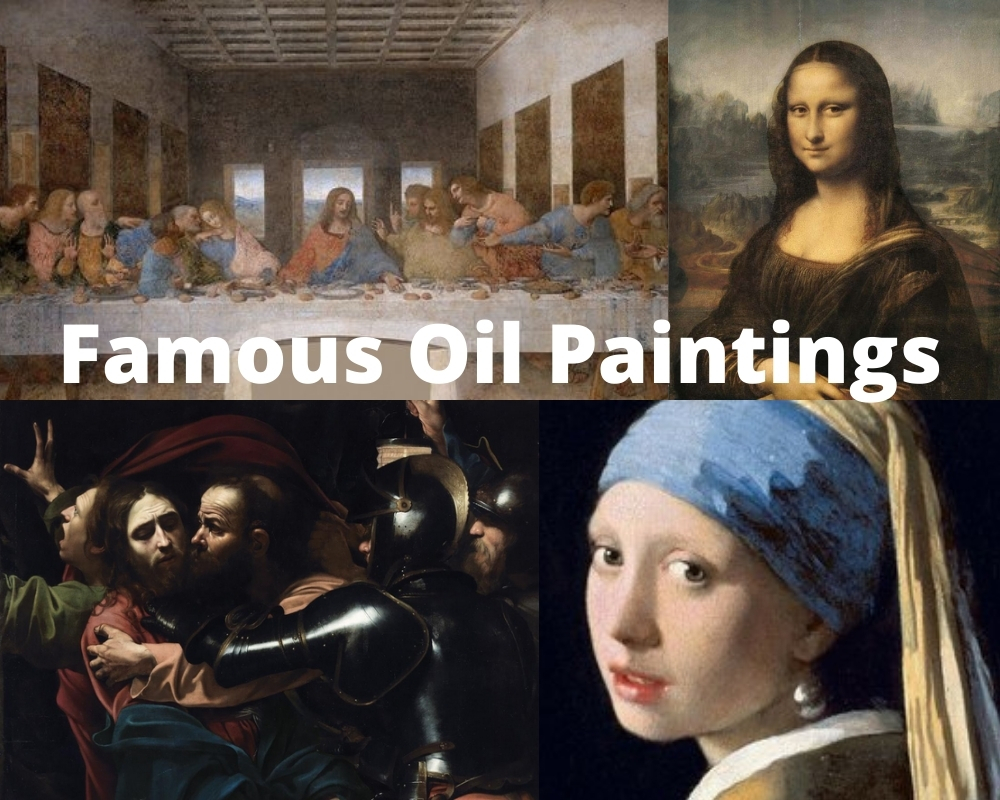 Some of the greatest masterpieces of all time have been produced through the means of oil painting. Many of the most famous Renaissance painters used oil to create the lasting impressions that have long been held in such high esteem as Leonardo da Vinci, the works of Rembrandt, Vincent Van Gogh, and many others.

According to historians, oil painting was first used in Asia in the 5th and 5th centuries, but it would later become the most popular style of painting in the 1500’s, especially throughout the Renaissance.

Painters realized that, through the use of oil, they could have better control over the tones and hues of colors, a more full understanding of the time it took for each paint to dry, and consistency.

The overall lasting effects of using different oils and experimenting with them made it possible to create different effects with remarkable results for some artists.

A closer look into some of the best oil paintings of all time reveals how some painters used this medium to their advantage and created some of the most memorable works of art in history.

There are few paintings as well-known as Leonardo da Vinci’s The Mona Lisa. It was painted sometime between 1503 and 1519 by who many consider to be one of the most talented artists to ever live.

The painting was done on a wood panel and da Vinci masterfully used various oil-based paints to create the masterpiece that many consider to be the most famous work of all time.

The painting is believed to depict a woman known to be the wife of Francesco del Giocondo, a wealthy banker from Florence, Italy.

It is said that one of the most striking qualities of the painting is the manner in which Mona Lisa’s eyes somehow “follow” the viewer left to right no matter what angle they look upon the work from.

Da Vinci was also a true master of the human form and created what many consider to be the most lifelike hands of any painting ever created.

Da Vinci was able to achieve the subtle variations in the skin and bones through use of oil-based paint in a way that few other artists have been able to replicate. The background contains many mysterious aspects and The Mona Lisa has long been considered to be as much of a mystery as it is a masterpiece.

2. The Birth of Venus

Among the most famous paintings from the Italian Renaissance is Sandro Botticelli’s work titled The Birth of Venus. Painted in 1483, the work featured a mythological subject during a time when most artists focused mainly on Judeo-Christian scenes from the Bible. The Birth of Venus features the arrival of the Greek goddess known as Aphrodite, also called “Venus” in Roman mythology.

The story goes that Venus arrived through the foamy sea and onto the sandy shore of the island of Cyprus. Botticelli managed to create a scene of beauty that draws the viewer to focus on the central figure while also appreciating the other figures on either side of the painting. To the right of Venus is a woman identified by art critics and enthusiasts as a Greek Horae, or minor goddesses of the seasons. To the left of Venus is the god of wind, Zephyr who is shown carrying a female goddess called Aura.

The painting was hailed for the lifelike appearances of each character in the work, as well as the detailed imagery of the shoreline. Many critics of the day protested the work, noting that it was too revealing, yet the nude figure of Venus somehow exudes a more pure image instead of one that might be viewed as lascivious.

Vincent Van Gogh has long been considered one of the greatest artists of all time, especially among those who work in the medium of oil-based paints.

His work titled Starry Night is among the most lauded impressionist paintings in history as it incorporates a unique swirling technique that many art critics believe gives excitement and life to the sky as it blends into the distant hillside.

Van Gogh painted the work in 1889 when he was 37 years old and remained at an asylum in southern France. The painting contrasts the natural versus the man made in a number of different ways that create a stunning visual sense.

The buildings and everything on the ground are painted with vertical brushstrokes as if to indicate that mankind is perpetually focused on the heavens while the night sky is portrayed with swirling strokes that evoke a playful and lively sense.

The only part of the man made structures that make contact with the illuminated night sky is the church steeple that seems to rise above the rest of the town and provide a single point of connection to the heavens.

The Last Supper is widely considered to be the most famous paintings of Jesus in existence as it portrays the highly emotional moment when Jesus Christ had just revealed to his disciples that one among their number would soon betray him.

Painted by Leonardo da Vinci sometime between 1495 and 1498, the work can be seen as a massive mural on the wall inside the Convent of Santa Maria delle Grazie in Milan, Italy.

The work is known for its level of detail in each of the disciples’ expressions, as well as that of Jesus. Da Vinci masterfully used the whole painting to point the attention of the viewer directly to the central figure of Jesus.

Much of the original painting has since flaked and deteriorated as it was painted with oil-based pigments instead of fresco, which is known to last much longer on similar murals.

A closer look at each of the figures in the painting shows an intense level of detail to the characteristics and qualities that are known about each disciple. The work is among the most famous paintings by da Vinci and remains as one of the most popular oil paintings ever created.

5. Girl With a Pearl Earring

Painted in 1665 by Dutch artist Johannes Vermeer, the work known as the Girl With a Pearl Earring is among the most widely-acclaimed oil paintings in history.

It is viewed by art enthusiasts and critics alike as one of the most lifelike paintings ever done and features a young girl with an especially captivating look that virtually drives the viewer to admire her beauty.

Vermeer was able to achieve an astounding level of realism in the girl’s features, as well as the subtle differences in the textures of her clothing and the cloth on her head. The different shades and color variations between light and dark captured by the artist are nothing short of remarkable.

Claude Monet was famous for painting works that featured incredible scenes of natural beauty. Among his greatest works, art enthusiasts agree that Impression Sunrise is truly one of the most awe-inspiring paintings he ever created.

Monet painted the work in 1872 and it became wildly popular due to the artist’s incredible ability to capture the early-morning sunrise in all its glory.

The painting is hailed for its truly unique scene of a dimly-lit harbor as the sun first makes its presence known among the local fishermen and boaters. Monet’s work portrays a scene from the port of Le Havre in France.

He was able to depict the incredible nature of the blossoming splendor of sunrise in the few moments that the Earth hangs in the balance between night and day.

The Surrealist style of painting produced some of the most interesting works and artists in history, among them, Pablo Picasso. His work titled Guernica was painted in 1937 during a time when art critics were increasingly drawn to the strange, yet compelling new genre of art. Guernica was painted on a massive canvas and depicts a scene of horrors from the Spanish Civil War.

Many critics dismissed the work due to the lack of colors, but others raved that the morbid grey and black perfectly displayed the dark nature of death and destruction wreaked by war.

The painting captures a disturbing moment of chaos that includes a woman wailing over her deceased child while soldiers and animals alike are caught up in the fray.

8. The Taking of Christ

The Italian painter known as Michelangelo Merisi da Caravaggio is famous for his unmatched portrayal of light and darkness. His work titled The Taking of Christ perfectly displays his mastery over light and dark and is well-known as one of the best oil paintings ever created.

Done in 1602, the painting shows one of the most agonizing moments during the life of Christ when he was captured by members of Jewish hierarchy who would later see him put to death. The depiction of Jesus exemplifies his gentle and non-violent nature in the face of those who were incensed with anger at his teachings.

Caravaggio’s painting of Jesus shows an incredible amount of realism and the creeping darkness that surrounds Jesus as he’s being arrested symbolizes the inescapable nature of his own demise.

Diego Velázquez captured a rare glimpse into the lives of Spain’s royal family in his work titled Les Meninas. Painted in 1656, the work portrays a scene which depicts the royal family in in the Cuarto del Príncipe in the Alcázar in Madrid.

The work contains the rare use of multiple light sources, one coming from the foreground and the direction of the viewer, and the other pouring in from the doorway in the background.

The scene depicts the royal family’s handmaidens, or les meninas, along with every member of the family, along with a few from the royal court.

Five-year-old Margarita stands with a captive stare at the viewer while Velázquez himself is included in the left portion of the painting.

Perhaps most curious is the way in which the artist chose to include the king and queen, Philip IV and Mariana of Austria, as they are looking on and can be seen in the reflection of the small mirror in the center of the work.

10. The Persistence of Memory

Salvador Dalí was known as the master of the Surrealist style of painting and he used oil-based paints to achieve such famous works as The Persistence of Memory.

The painting was done in 1931 and features a bizarre scene of clocks melting into a barren desert landscape. Dalí was able to produce a smooth and vivid image of the clocks seemingly melting in a way that reflects the never ending march of time.

His aim was to capture a somewhat realistic scenario that incorporated elements of natural and unnatural effects through what he deemed to be “the usual paralyzing tricks of eye-fooling.”

The true meaning of the painting has long been argued by critic and art enthusiasts, but the fact remains that this work of Dalí is among the most memorable oil paintings of all time.