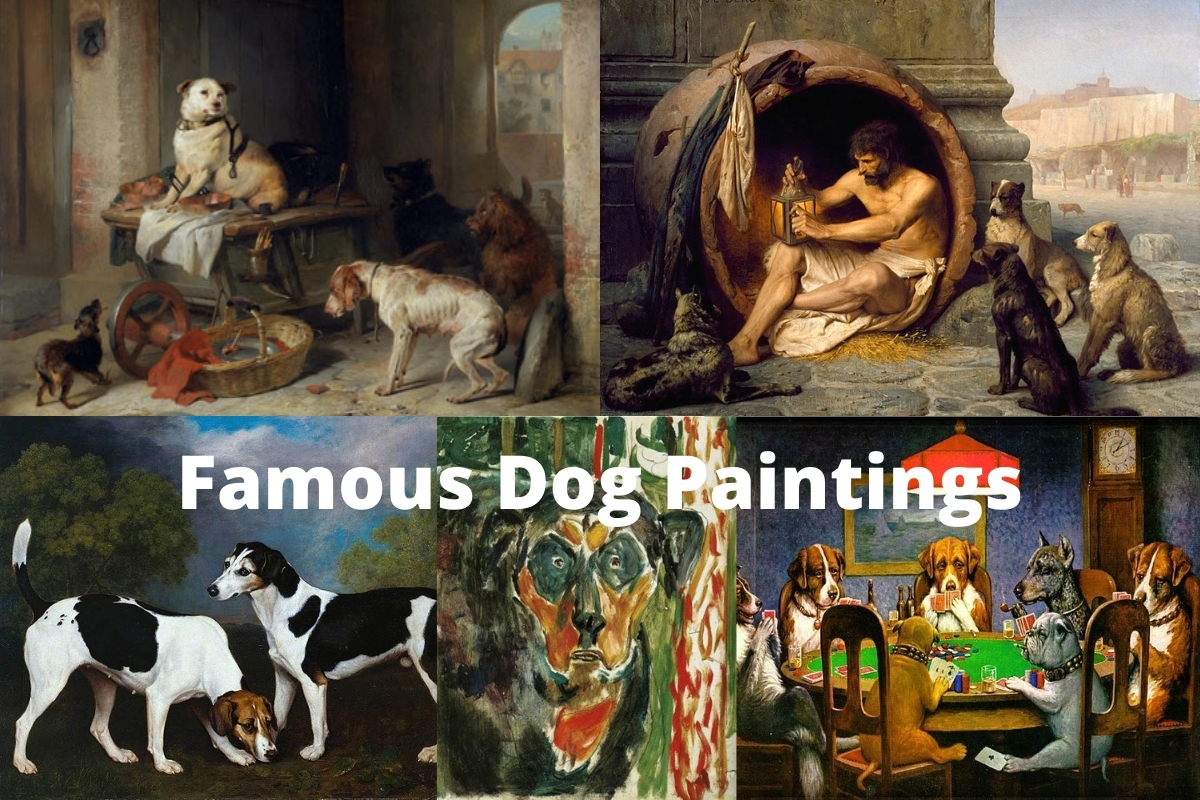 Dogs have long been considered one of the most valuable of the many different domesticated animals. They are kept as simple pets, but many canines have a much higher purpose as they are trained to assist in everything from emergency rescue efforts to sniffing out dangerous criminals.

Throughout history, there have been artists who have painted dogs in various scenes. These works sometimes include portrayals of stray dogs, but some of them clearly indicate that the dog belongs to a person, who is sometimes included in the work as well.

Many of the most well-known artists in the world have sometimes painted works depicting “man’s best friend” in a variety of settings.

In this article, we will explore some of the most famous dog paintings ever created and look more closely at why those artists chose to portray

There are many paintings that have been done since the Renaissance era which include dogs, but one of the most recognized of these is C. M. Coolidge’s painting titled A Friend in Need.

This work is one of the most popular copies in modern times as it is usually seen hanging on the walls of pubs or restaurants or a variety of other places. This painting is so common that it is often referred to as “Dogs Playing Poker.”

The humor is evident in this 1903 work which depicts a serious poker game being played by a group of dogs. The original work features seven dogs sitting around a card table, engaged in a serious game of high-stakes poker.

Since it was created, there have been numerous copies and variations of this scene with different breeds of dogs and even other animals.

The painting gets its name from what we see taking place in the scene’s foreground. Two bulldogs are seated next to one another at the table with one having a hand of poker that’s one ace shy of having the coveted four aces.

The dog’s friend and fellow bulldog is seen giving him the needed ace under the table with his paw.

Another one of the best dog paintings ever created was done by Sir Edwin Landseer in 1833.

Art historians and critics recognize this as one of Sir Landseer’s earliest works and it is one that is among the most easily-recognized of any painting that involves dogs. Like Coolidge’s work, this one is also full of humor and symbolism in its own right.

The painting derives its name from the specific breed of dog that is the central focus of the painting—a Jack Russell terrier.

The depiction is believed by art critics to be a metaphor for the systems of power and governmental authority as we see the Jack Russell terrier firmly in command of the situation as he sits atop the table and guards the food from being eaten by the other dogs.

The painting very much conveys the unfair treatment that many people get from their government as the Jack Russell terrier is seen as being very well-fed to the point of obesity while the other dogs, who are sheepishly prowling around the table in hopes of getting one scrap or morsel, are severely malnourished.

Francisco Goya was one of the most famous Spanish artists from the 18th and 19th centuries.

He is one of the most well-known Romanticism painters and one painting in particular that he did is considered to be among the most famous dog paintings ever created. The work is known simply as The Dog and was painted in 1823.

The painting is very simple in composition with two halves divided by an upper and lower section. The sky has a unique pale reddish coloration while the dog’s is seen below, it’s body covered by what appears to be sand or some sort of mass.

Many art critics have argued over the meaning of the work, but most agree that Goya was simply trying to convey some sense of loneliness in the dog’s expression.

The dog’s head is raised and the ears seem to be positioned as if he is being attentive to something out of view on the right side of the canvas.

It is difficult to determine just what Goya’s intent was with this work as it was actually never meant to be publicly exhibited.

Eduard Manet was a famous French painter that lived and worked during the Impressionist era of the 19th century.

Many art historians note that he was among the first artists from the period to devote much of his efforts to painting scenes and figures from his actual life instead of religious figures or representations, or depicting various activities from the social lives of French society at the time.

The painting has many of the same hallmarks that Manet’s other Impressionist masterpieces offer to the viewer. The dog is seated atop a plush red pillow as if it is some sort of royal figure.

Manet’s brushstrokes perfectly capture the sweeping curls of the dog’s fur and the hair also appears to have a sheen to it that signifies that the dog is well taken care of.

Edvard Munch was known as one of the most unique artists of the 20th century as many of his works border on Surrealism and have their own distinct properties to them.

One of his most notable paintings is known as Head of a Dog. This particular work was done in 1930 and features a relatively simple composition of a dog’s head and neck.

Munch is said to have experienced an extremely difficult time during the first decade of the 20th century shortly after the loss of his mother and sister, who both died in 1908.

To help cope with the grief, the artist developed a special affinity to dogs, who kept him company during the years when he was suffering the loss of his close family members.

This painting depicts the head of one of Munch’s beloved dogs, but little else is known about the canine.

Berthe Morisot is another prominent artist from the Impressionist era. Many of her works feature various social settings or portraits of people, but this particular work depicts a woman and her dog.

Painted in 1893, the work is titled Julie Manet and her Greyhound Laertes.

She was known as one of the most famous female artists from the era and her style was truly unique as she thrived in the Impressionist movement thanks to her bold use of brushstrokes and coloration.

George Romney was a famous British portrait artist who lived during the 18th century. He was famous for having a knack at creating works that were exceptionally realistic and Romney was commissioned to paint many different portraits for royal officials and public figures during his career.

One of his notable dog paintings, is titled Lady Hamilton (as Nature).

This 1782 painting is one that is praised for the artist’s outstanding use of light against a darker background, which brings out the features of the lady in the work.

The pup she holds in her arms is seen attentively looking at the viewer’s direction with an intrigued expression on its face.

Winslow Homer was a well-recognized American painter from the 19th century who was known for his works that captured the essence of life for common people in the United States during the mid-1800’s.

One of his greatest works is a painting that’s aptly-named Dogs in a Boat.

This 1889 painting is one that features a backdrop of Winslow’s favorite getaway locations, which was a hunting lodge that was located deep in the Adirondack mountains and was known for having excellent hunting and fishing opportunities.

The dogs are calmly seated in the boat as it appears to drift along the placid water with the leaves having an autumn shade in the background.

Another one of the most well-known paintings involving canines is Jean-Léon Gérôme’s highly-recognized painting that was tiled Diogenes.

This work has much of the same elements of the Neoclassical era that hails back to the famous Renaissance period when artists depicted humankind and animals in a way that gracefully highlighted their best features.

The 1860 work features the famous Greek philosopher, Diogenes, seated in a sort of shelter that was said to be a clay tub while a group of dogs are seated around, watching him intently.

The dogs are said to represent those who viewed Diogenes’ work and beliefs with particular austerity.

10. A Couple of Foxhounds – George Stubbs

Fox hunting was considered to be a popular outdoor activity that was mostly enjoyed by those who enjoyed nobility or wealth during the mid-1700’s.

This form of hunting required the use of well-trained hounds that were groomed to seek out the fox and run after it for hours on end until the animal was tired and allowed hunters a better chance to shoot it down.

Most hunters took particular pride in their foxhounds as these were considered to be highly valuable symbols of nobility. George Stubbs’ 1762 painting titled A Couple of Foxhounds is among the most famous dog paintings ever created.

This painting was done for a prominent English family and features two beautiful dogs posed in front of a natural background.

Stubbs was praised for his ability to portray the dogs with exceptional realism and he would go on to create many more works that featured foxhounds throughout his career as an artist.