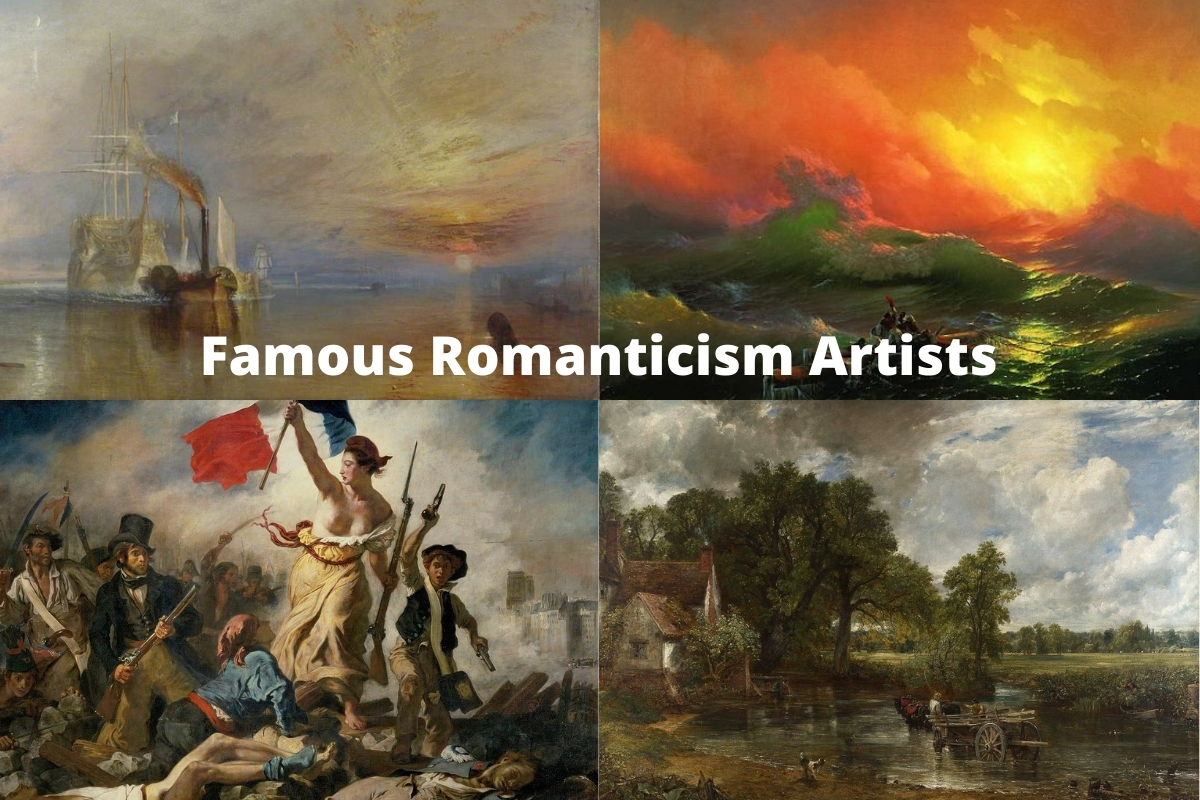 The Romanticism movement with it’s emphasis on imagination and emotion was a response to the Enlightenment Age, also known as the Age of Reason, which had a more focused emphasis on reason and science.

The Romanticism artists sought to be free from any artificial rules about what a piece of art should be and instead the work should flow freely from the artists imagination.

The following famous romanticism artists are some of the biggest names of the genre and their work covers a broad range of different styles of painting.

Francisco Goya was a Spanish romantic painter, print-maker, and portraitist. Born March 30, 1746 in Aragon to a lower middle-class family, Goya’s long career was wildly successful. He is remembered as an important influence in Spanish art during the late 18th and early 19th centuries.

Many of his romanticism paintings were historically significant to the Spanish people, in particular his work The Third of May 1808 that marked the defeat of the rebelling Spanish forces following Napoleons occupation of Madrid.

He is often called the last of the old masters in art as well as the first modern painter. Later in life, his work took on darker and more pessimistic tones after illness took his hearing.

Goya married his wife, Josefa Bayeu, in 1773, and their family life was plagued by many miscarriages. Goya’s only child to survive into adulthood was a son. Goya was appointed court painter for the Spanish Crown, leading him to depict many Spanish royals and aristocrats in personal portraits.

He also designed Rococo-style tapestry cartoons throughout the Spanish royal palace. Goya died April 16, 1828, after a stroke and poor health.

William Blake was an English painter, printmaker, and poet who is considered one of the most important poets and artists in the Romantic Age. Born November 28, 1757, Blake did not experience much critical success during his lifetime.

His work took on a new significance after his death. Many eventually considered Blake to be Britain’s greatest artist and one of the most expressive, creative artists of all time.

Blake lived in London for his entire life with the exception of three years living in Felpham. He considered imagination as “human existence itself” and “the body of God.” This led to a corpus full of rich symbolism and exploration of mystical themes.

Though a devout Christian, Blake was hostile to organized religion and did not associate with the Church of England. He maintained a lifelong friendship with Thomas Paine and his works included many insightful political, philosophical, and spiritual themes. Blake died on August 12, 1827.

John Constable was an English Romantic painter who primarily depicted landscapes. Constable was born in Suffolk on June 11, 1776. His work revolutionized landscape painting, especially his depictions of Dedham Vale around his home. This area is now nicknamed Constable Country in his honor.

Constable’s works were filled with great affection for his natural surroundings and described his romantic paintings as identical with his personal feelings for them.

His most famous works include “Dedham Vale,” “The Hay Wain,” and “Wivenhoe Park.” While he never experienced financial or widespread critical success during his life, his landscape paintings would go on to become extremely important.

His works rank among the most popular and valuable in the history of British art. Constable experienced more popularity in France than his native England, inspiring the Barbizon school. Constable became a member of the British Royal Academy at age 52. He died on March 31, 1837.

His style emphasized color and movement over a clear outline or meticulous models. He favored styles he learned in North Africa over the classical works of Greece or Rome.

Delacroix focused heavily on individualist experience and, though a passionate person, was serious about expressing it as clearly as he could. Much of his work features his impressions of the violent forces of nature.

His expressive brushstrokes, skill with color, and study of colorful optical effects, all contributed to his renown among impressionists.

His works would go on to become some of the most important French paintings given how much of an influence he would have on those that followed.

He also inspired the Symbolist movement. Born on April 26, 1798, Delacroix died on August 13, 1863, making him one of the last old masters in Europe and one of the few to live to be photographed.

J.M.W. Turner, known as William Turner during his lifetime, was an English Romantic painter, watercolorist, and printmaker who is best remembered for his landscapes, expressive colors, and dramatic marine paintings.

Born April 23, 1775 to a lower middle-class family in London, Turner never married but was father to two daughters with his housekeeper, Sarah Danby. He was controversial in his own day.

Turner created more than 30,000 paper works, 2,000 watercolor paintings, and over 550 oil paintings. His works are often considered the catalyst for landscape painting’s later prominence and rivalry with history painting.

Turner lived in London for his entire life. His later work was much darker and less optimistic. This accelerated when his father died, after which he became more intense in his work but let his gallery fall into disrepair.

He had poor health and lived in extreme poverty until he died on December 19, 1851.

Jean-Auguste-Dominique Ingres was a French painter who is best remembered for his drawn and painted portraits. Born August 29, 1780 to a modest family, Ingres desired to guard art against the rising Romanticism of his day.

His works incorporate distortions in form and space that held great influence over later modern artists like Matisse and Picasso. His style developed out of rigorous study of Flemish and Italian Renaissance artworks, changing little throughout his career once developed.

Earlier critics saw Ingres’s works as strange and outdated. He was eventually recognized by the Paris Salon with his infamous “The Vow of Louis XIII.” Ingres was acknowledged as the leader of French neoclassicism.

His later career produced many alternate versions of his earlier works as well as stain glass window designs and significant portraits. He finished his final Orientalist painting, “The Turkish Bath,” at 83 and died three years later on January 14, 1867.

Caspar David Friedrich is considered the most significant German artist of his generation. Born on September 5, 1774 in what was then Swedish Pomerania, Friedrich is best remembered for his allegorical landscapes.

These works depict mystical figures in contemplative surroundings like night skies, barren trees, Gothic ruins, and morning fog. He tried to depict his contemplation of nature, revealing his subjective emotional states through his work.

Friedrich’s era was marked by widespread spiritual revival as Europe rejected much of materialistic society. Friedrich strove to display the divinity and spirituality of creation, over and against human society. He was successful in his early career before falling out of public view in his later years.

Friedrich died on May 7, 1840. His works grew in popularity with early 20th century expressionists, surrealists, and existentialists. Unfortunately, Nazis co-opted his work for propaganda during World War II, staining his reputation until it recovered in the later 20th century.

Ivan Aivazovsky was a Russian Romantic artist who is most widely known for his paintings of the ocean. Born July 29, 1817, Aivazovsky’s family was Armenian and lived at the Black Sea port Feodosia in Crimea. He spent most of his life there.

Aivazovsky had many personal ties to the Russian Empire’s military and political elite, often attending military events. He was held in high esteem by the Russian state while alive and was even given state sponsorship. He remains popular in Russia today.

Aivazovsky was one of the most important artists of his generation. His popularity grew to become international as he held exhibitions across the United States and Europe.

He created about 6,000 paintings through his career, making him incredibly prolific. He focused most of his works on seascapes but also portrayed various Armenian cultural themes, personal portraits, and battles.

Henry Fuseli was a noted Swiss painter, writer, and draftsman. Born in Zürich, Switzerland on February 7, 1741, to the noted landscape and portrait painter Johann Caspar Füssli, Fuseli was the second of 18 children.

His style favored depictions of the supernatural, focusing on ideal scales and incorporating exaggeration. Many of his works directly deal with supernatural subjects. His style influenced younger artists of the time, such as William Blake.

Fuseli held the Royal Academy posts of Professor of Painting as well as Keeper. He was inspired by the works of Michelangelo and Monte Cavallo’s marble statues. He enjoyed contemplating these works while staying in Rome.

Fuseli’s works are renowned for their earnestness and intensity, as well as his mastery of lighting and shadow. He painted more than 200 works, though he seldom exhibited most of them. He also created over 800 sketches and designs that are admired for their original designs.

His best known work is “The Raft of the Medusa.” Géricault was born on September 26, 1791 in Rouen, France. His education began in the sporting art and classical figure composition. He soon left to study at the Louvre. He copied many famous works during his stay.

Géricault returned to France in 1821 and soon after painted his famous series of ten portraits of the clinically insane. Five of these works survive today. These works are valued for their realism in documenting psychological traumas, combined with a bravura style that boldly emphasizes their discomfort.

Géricault continued to plan great epic compositions despite ill health in his final years. Dying on January 26, 1824, after a long illness, Géricault’s work went unfinished but his influence only grew.

We hope you have enjoyed our list of romanticism artists.