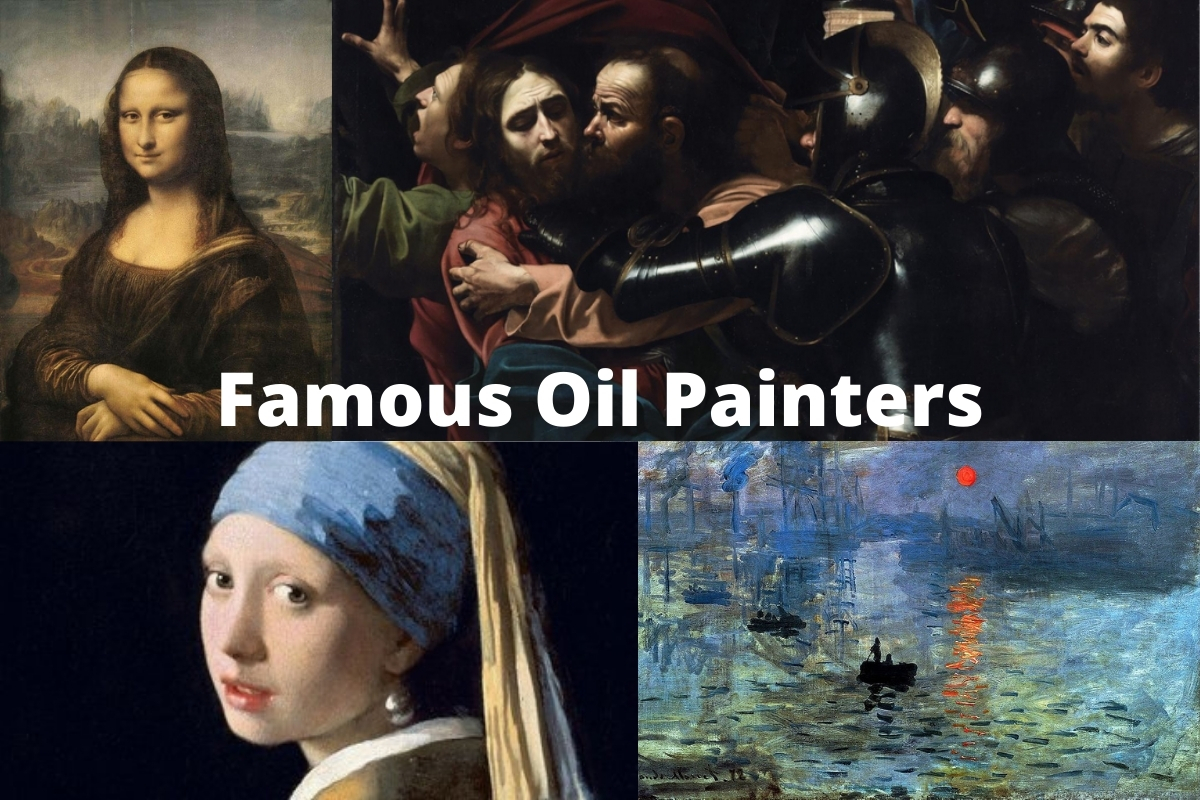 Using oil painting methods, artists were able to produce works that were of much higher quality than before.

Oil-based paints were usually made from mixing dried powder pigments with linseed oil. The artists during the 15th century were able to create an oil-based paint that was very much like paste in consistency.

This new method of producing paint allowed many artists to fuse different pigments together to create highly specific tones, as well as create crisp lines, translucent material, and a new level of realism as it related to light and darkness.

Many of the most famous artists in the world were known as masters of oil-based paint and the delicate process that comes with getting their paint to just the right consistency. Here are 10 of the most famous oil painters in history.

Leonardo da Vinci may very well be the most famous artist in human history. He is the quintessential ‘Renaissance man’ as he was known to be a prolific philosopher and inventor, as well as an incredibly gifted artist.

Da Vinci was one of the earliest known masters of oil-based painting and many of his most famous works are still considered to be among the greatest paintings in history.

He was known to experiment with oil painting on various surfaces and one of his most famous works, The Last Supper, was done on two layers of preparatory ground material which sadly began to disintegrate shortly after it was finished.

Throughout his career, he worked to perfect the type of surface he would paint on, as well as the right kind of oil-based paint he needed to create his works, most of which were painted in the early 1500’s.

In most of his famous masterpieces, da Vinci used his own handmade oil-based paints on a variety of different surfaces that ranged from wet plaster to dry stone wall.

The oil pigments that he created were responsible for his production of such works as the Mona Lisa, Virgin of the Rocks, and many others.

Among the most famous artists of all time, Michelangelo Buonarotti is arguably the most talented to ever live. A painter during the Renaissance era, Michelangelo is best known for his paintings that cover the ceilings of the Sistine Chapel and other notable religious structures of his day.

He and other painters from the Renaissance period discovered that one could utilize the natural luminosity and plasticity of oil colors to achieve an entirely new level of realism.

Michelangelo is believed by art historians and scholars to have worked to create his own pigments from various oil-based concoctions as most of the notable artists from the Renaissance did.

His painting on the ceiling of the Sistine Chapel is one that has lasted throughout many centuries in remarkably-well condition thanks to the quality of the paints he used.

Art historians record that Michelangelo painted on a specialized scaffold instead of lying on his back as some might assume. He later lamented his aching back after several months of work on the ceiling, even writing a poem about it.

Through the use of oil-based paints, Michelangelo managed to produce artwork that was highly realistic and possessed a much deeper sense of perspective than almost any other painter had done before him.

Vincent Van Gogh is perhaps most famous for being an artist that was tormented with serious mental illness which eventually led to him cutting off his own ear in a manic state.

While his works are celebrated as some of the most vibrant paintings ever created, many casual art observers rarely give a second thought as to the type of paint he used to create these masterpieces.

He is known to have utilized oil paint that was created through the use of natural pigments in the same way so many artists before him had done. These natural pigments were also mixed with a newer synthetic material that was actually being developed at the time for the textile industry.

Among his most famous paintings, Starry Night is perhaps the most recognizable among art observers of any level. He reached a stage of his life in 1889 when he produced a large number of nature paintings that mainly focused on flowers and plant life. He created a work titled Irises that year, and would go on to paint many other notable works before his tragic death just one year later.

Few artists had such a wide range of depth in their color palette as Johannes Vermeer. He is known as one of the most famous Dutch artists in history and many of his works were done in the mid-1600’s. Vermeer is known to have used a wide variety of oil paints at his disposal, including some of the most expensive pigments of the 17th century.

Vermeer is known to have used a special pigment called ultramarine which was a highly expensive blue pigment extracted from minerals derived from lapis lazuli, which could only be found in Afghanistan.

He also employed a wide range of other extremely rare pigments to create his works—many of which are celebrated for their intense coloration.

His most famous work is titled Girl with a Pearl Earring. This painting, and many others like it from the Baroque movement, are hailed as one of the most striking works in history for the intense level of realism in every facet of the painting.

The Baroque period produced some of the most famous artists in history, including the Dutch master artist Rembrandt van Rijn.

He is known to have meticulously painted each of his works using specially handmade pigments that were the secret to his ability to paint in a way that was strikingly three-dimensional.

Rembrandt utilized a technique known as impasto, which involves the use of very thick paints that often protrude out from the painting’s canvas.

Scientists have concluded that Rembrandt was able to create his captivating images using a very thick, heavy paint that was actually synthesized with a lead-based material. This gave the painter’s pigments a somewhat lifelike appearance in many ways.

Some of Rembrandt’s most famous works include The Night Watch, which was done in 1642, as well as The Return of the Prodigal Son and many other works that were based on Judeo-Christian themes.

Claude Monet is widely known as one of the founding fathers of the Impressionist movement, which took place during the 19th century. Monet is known to have been a firm believer in the power of painting ‘en plein air’ which simply means, ‘outdoors.’

Monet is one of the most unique artists as he would routinely work on multiple canvases of the same scene. Which one he choose to work on would depend entirely on the prevailing light conditions.

The most famous of all the French Impressionists he was also one of the most successful and made a decent living from his art unlike some of his contemporaries.

Unlike other artists who used a palette, Monet’s insistence on painting outdoors in one sitting required him to mix his own oil-based pigments on the canvas as he worked.

Some of Monet’s paintings of note are Impression, Sunrise (1872) and Woman with a Parasol – Madame Monet and Her Son (1875).

Born in 1881, Pablo Picasso was an artist that would truly transform the world of painting during his lifetime. He dabbled in a number of art styles including Surrealism, Cubism, and Expressionism and became known as an artist who remained true to his own sense of expression rather than attempting to match other painters from his day.

In order to get the sharp, linear figures many of his works were known for, Picasso used a specialized oil-based paint material that was infused with a type of enamel.

While exploring many different means of expression during his ‘High Cubism’ phase, Picasso actually mixed coffee grounds, sand, ash, and other materials with his paint for various reasons.

He is best known for his works in Cubism, among them are his painting titled Guernica (1937) and Les Demoiselles d’Avignon (1907).

The Baroque period was a time in which artists explored the many different ways one could use light and dark on the canvas. None were able to match the masterful efforts of Michelangelo Merisi da Caravaggio when it came to producing a strikingly beautiful contrast between light and dark, which also represented good and evil in many ways.

Unlike the legendary artists that came just a century before him, Caravaggio did not use frescos to paint his masterpieces. Rather, he was known to use pigments that were created using ground oils on linen canvas. Caravaggio was truly gifted in his ability to produce paintings that had impressive elements of realism.

He is famously known for his paintings that include The Calling of St Matthew (1600), Bacchus (1596), and Judith Beheading Holofernes (1599).

Diego Velázquez is widely considered the most famous Spanish artist from the Baroque era. He enjoyed high amounts of prestige during his lifetime, serving in such roles as the official painter for King Phillip IV.

Velázquez garnered high amounts of praise from notable art critics and enthusiasts during his lifetime for his peculiar style which is referred to as chiaroscuro, or the high levels of contrast between light and dark in a work.

Being part of the royal court, Velázquez had some of the most rare and expensive oil-based pigments in the world at his disposal during his career. He used these colors to create a range of masterful works that include Las Meninas (1606) and The Surrender of Breda (1635).

Among the most peculiar artists in history, Salvador Dalí is celebrated as one of the most creative and unique among a vast array of other artists from the somewhat modern art movements of Surrealism and Cubism.

Many of his most notable works were done in the mid-20th century and are known for their illusory and bizarre images.

Many of Dalí’s most iconic works feature misshapen or melting figures that seem to have a liquid quality about them. Many art historians and critics believe he was able to achieve this appearance using oil-based paint that was mixed with generous amounts of natural resin.

This produced a more liquid-like paint that could be applied to the canvas with greater control as Dalí used a smaller brush.

He is most well-known for his Surrealist paintings like The Persistence of Memory (1931) and Swans Reflecting Elephants (1937). He also created many other iconic works that are considered some of the greatest masterpieces of the modern era.