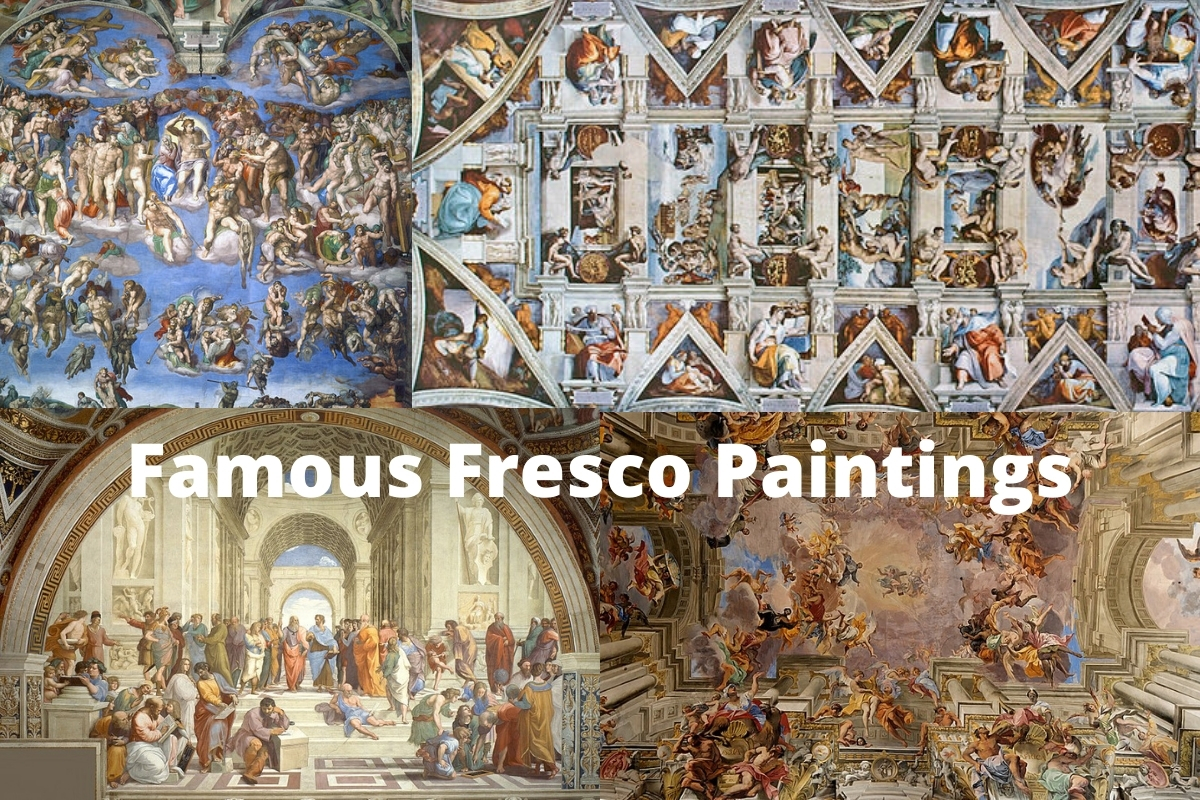 Fresco paintings are quite unlike any other style of artwork in the world. Painted as large murals and imagery that adorn some of the world’s most cherished cathedrals and chapels, frescos are a type of artwork that’s painted into the walls rather than onto them.

This is due to the fact that fresco painters use a specific water-based paint material that is covered on freshly-laid plaster so that the paint dries into the wall itself along with the plaster.

The process of fresco painting involves an intense and focused effort on behalf of the painter that brings about permanent results that are forever set upon the walls or other surface as a beautiful mural.

The word ‘fresco’ is derived from an Italian term that basically translates to ‘fresh.’ The fresco painting technique is one that has stood the test of time and involves some of the most notable paintings ever created.

In this article, we will explore 10 of the most famous fresco paintings ever done, as well as the story behind the artist and the meaning of the work itself.

Undoubtedly, the most famous fresco to ever grace the interior of Italy’s sacred chapels is that of Michelangelo’s work on the ceiling of the Sistine Chapel in Vatican City.

Michelangelo di Lodovico Buonarroti Simoni is widely considered to be among the central figures in the Italian Renaissance era that would prove to be a time that shaped the course of the future of art from the 1400’s until present day.

The artist worked on the fresco painting from 1508 until roughly 1512 before finally finishing the expansive mural. While many other artists chose to paint on the walls of churches and other prominent structures, Michelangelo believed his work would have a much greater significance and meaning if it were done on the ceiling as the purpose was to direct the viewer’s thoughts upward toward God and Heaven.

The chapel’s ceiling contains many scenes from Biblical stories and various representations of God and important figures from the Christian faith. The most recognized of these is known as The Creation of Adam and features a figure of God reaching out and bringing his first human creation to life with the touch of a finger.

The painting was done on the wall of the Convent of Santa Maria delle Grazie in Milan, Italy in 1498. The work depicts the scene from the Biblical story of Jesus in one of his last moments alone with his 12 devoted disciples before he was taken away and crucified.

Art critics and enthusiasts alike have noted that the painting is filled with metaphoric imagery and symbolism that they believe da Vinci masterfully implemented during the process of creating the painting.

This particular painting is not in very good condition compared to other murals that were done at a similar time period simply because da Vinci painted it on a stone surface that was sealed with tempura.

This led to an increased level of moisture to collect on the painting’s surface and the work itself has been refinished many times in order to preserve da Vinci’s efforts.

While the ceiling of the Sistine Chapel seems to get most of the attention from art lovers and even critics, the wall behind the chapel’s altar is equally impressive and majestic.

This section of the chapel was also painted by Michelangelo quite a bit later after he finished the work on the church’s ceiling with many scholars placing the work at about 1536 to 1541.

This fresco painting is a massive expanse that includes dozens of figures from the Bible and various supernatural elements in the form of angels, prophets, apostles and God himself along with Jesus Christ at the very central top portion.

The painting represents the second coming of Jesus and what is expected to happen, according to the writings contained in the New Testament scriptures.

The work contains more than 300 individual figures that are all painted in intricate detail according to Michelangelo’s distinctive style that was representative of the Italian Renaissance era.

4. The School of Athens – Raphael

The third member of the most respected painters from the Renaissance period was Stanze di Raffaello, who is simply known as Raphael. He was a renowned sculptor, as well as a gifted painter that created countless iconic works that centralized around Biblical stories and concepts from the Christian religion.

One of his most memorable work was a fresco painting known as The School of Athens.

This work was done on the wall of the Apostolic Palace, which is located in Vatican City. The painting is perhaps one of the best and most realistic for its sheer depth and perspective as the painting seems to realistically depict the massive, beautifully-adorned hall of the famous institution that was located in Athens, Greece.

This school was remembered as a center for higher learning and philosophy during the time shortly before the Italian Renaissance in which the many tenants of ancient Greek philosophy were once again embraced by the most influential figures from the time period.

The painting is known for its immaculate detail and is a perfect representation of Raphael’s incredible devotion to making his paintings, as well as his sculptures, as realistic as possible.

One of the earlier fresco paintings that is a worthy addition to our list of fresco works is Fra Angelico’s work known as The Annunciation.

This painting was created sometime between 1440 and about 1445, according to art historians and scholars. Fra Angelico was one of the lesser-known artists from the Renaissance era, but many of the most famous painters drew inspiration from his methods and techniques.

This particular work was done at the Convent of San Marco in Florence, Italy and still remains as one of the most well-preserved fresco paintings to this day. The painting represents the moment in which the angel Gabriel meets with Mary and informs her that she would soon be carrying the child that would later become the Messiah.

There are various other representations of this Bible story, but few are known to show both figures outside.

Fresco painting was alive and well throughout the region surrounding the Mediterranean Sea well before the Italian Renaissance or even during the years in which the Biblical story of Christ takes place.

One of the most famous early fresco works from history is referred to as Toreador Fresco and scholars and historians believe the work was done around 1450 B.C.

The artist who created this work is unknown, but the value of the fresco painting is evident in the quality and unique nature of the scene in which it represents. The painting adorns the upper portion of the eastern wall in the massive palace of Knossos, located on the island of Crete.

It is believed that bulls and other animals were viewed in a special, sacred context and that this fresco carried with it a significant amount of meaning to the culture of the people of Crete from this time period.

7. The Expulsion of Heliodorus from the Temple – Raphael

Raphael was known for creating works that focused on some of the more unique and lesser-known stories surrounding the various figures from Judeo-Christian antiquity.

One of his frescos comes from an account that was actually not included in the Bible itself, but in the Book of 2 Maccabees. This book is famous for is record of the legendary Maccadean revolt and Raphael’s work is a tribute to one of the most well-known stories contained in it.

The painting is situated on the wall of the Apostolic Palace in Vatican City and remains in excellent condition compared to other fresco paintings from the time period that were done in slightly less ideal conditions.

It is clear that Raphael paid careful attention and delicately worked on this painting in order to properly depict the central figures in great detail.

One of the oldest and most highly-revered fresco paintings from history is known as The Investiture of Zimri-Lim. This work is located in the royal palace of the city of Mari, which is located in eastern Syria and it is believed to date back as far as the 18th century B.C.

It is not known who the artist was that created this work as it was discovered by archaeologists in 1936 as they were searching through the ruins of the once great and powerful city-state.

The painting itself depicts the ceremony in which Zimri-Lim is anointed as king over the land and its people in a ritual that involves the worship of Ishtar, which was an ancient goddess of Mesopotamean lore that represented fertility, love, beauty, war and other things.

One of the most unique fresco works that still exists today from ancient times is that of The Shahi Hammam. This painting adorns the giant ceiling and walls of a royal Persian-style bathhouse that’s located at Lahore, Pakistan.

It is believed that the building was constructed sometime during the early 17th century, but there is some debate about the actual timing and when the fresco was completed.

The walls and ceilings and other parts of this structure are covered with elegant depictions of various figures and designs from Persian culture.

The bathhouse and its surrounding structures were finally restored in 2013 and the intricate detail and work that went into the original fresco works along the walls and ceiling are some of the most impressive of any that’s found in Asia or the Middle East.

One of the most impressive fresco paintings that’s ever been created was done on the sprawling Jesuit church of Sant’ Ignazio (St. Ignatius of Loyola), which is located in Rome, Italy.

This painting is one of the few fresco works that is done according to the Baroque style of painting and carries with it the immaculate beauty and craftsmanship that this art period was famous for.

The fresco is known as Apotheosis of St. Ignatius and was done by a notable Jesuit artist by the name of Andrea Pozzo. The painting is an incredible representation of the ability of Pozzo to create vast distinctions between perspective and space, as well as intricate detail.

Those who have viewed this fresco in person have commented on the incredible sense of depth and perspective that the artist was able to accomplish.

The ceiling looks as if it opens up into the heavens and the viewer is exposed to all of the otherworldly scenes of beauty that are nearly indescribable. In terms of sheer detail and quality, as well as use of space, this particular fresco painting is arguably the most impressive of any ever created throughout history.