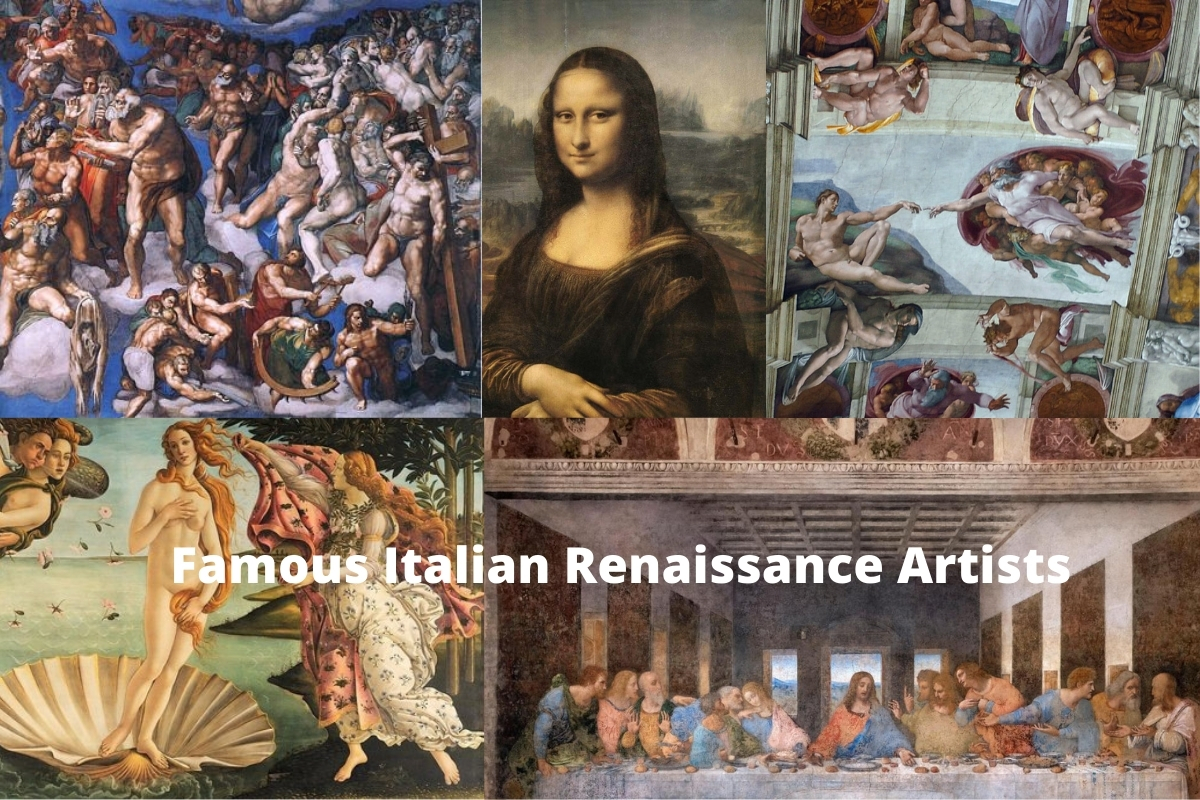 The Italian Renaissance was a time that is remembered as one of the most influential periods in history when it comes to its many contributions to the world of art.

The Italian Renaissance was a time that painters began to focus more heavily on areas like perspective, composition, light and dark, and a number of other elements that would prove to enhance the quality of their artwork to great degrees.

Some of the most prominent artists from the Italian Renaissance are names that are synonymous with artistic perfection and excellence. These painters were known to have studied extensively to produce works that were markedly better than any that had ever been done before them.

The Italian Renaissance began in the late 13th century and would stretch into the 16th century. Its influence throughout other parts of Europe and the rest of the world have been abundantly clear since this era.

Leonardo Da Vinci is easily considered to be the most famous figure of the Italian Renaissance period. He was said to be one of the most talented artists of his day, but was also highly skilled in the areas of literature, mechanics, and many other fields of study which proved his status as a genius.

Da Vinci was born in 1452 in Florence and would grow up during a time when the Renaissance period was prominent throughout Italy.

His life began as one that might have been otherwise disenfranchised as he was born out of wedlock, his father being a notary and his mother, a peasant woman.

He is best known for his paintings, but many scholars and historians have taken a keen interest in Da Vinci’s notebooks as they are filled with incredibly complex ideas and theories that were often presented in drawings.

It is the life and person of Da Vinci that was filled with various intellectual pursuits and areas of mastery, that we derive the modern term “Renaissance Man” from.

One of the most prolific figures of the High Renaissance period was Michelangelo. He is remembered as a masterful painter, sculpture, architect and poet who was one of the most influential members of the famous 15th century time period that shaped the trajectory of art going forward.

He was born in 1475 in Florence and is perhaps best known for his religious-themed paintings and sculptures that still adorn some of the greatest cathedrals in Italy.

His most notable work is undoubtedly the painting that was done on the ceiling of the Vatican’s Sistine Chapel, which stretches more than 500 square meters across the vaulted ceiling of the chapel and features more than 300 figures from the Bible and the Christian faith.

Michelangelo is one of the most famous Renaissance artists whose works have managed to survive and remain in good condition to this day.

Another one of the most prominent figures from the Renaissance period is Raffaello Sanzio da Urbino, who is best known simply as Raphael.

He was born in 1483 and is regarded as one of the three most important figures of the Renaissance movement as a whole, the other two being Da Vinci and Michelangelo.

He began his career as an artist early in life as his father was a well-known painter in his own right. Raphael was commissioned to paint the papal rooms in the Vatican in 1508 and he produced some of his most notable works in doing so.

Although he died at the age of 37, Raphael had an immense amount of influence over artists in Italy, as well as the rest of Europe as his works have been highly studied since they were produced.

Donato di Niccolò di Betto Bardi was born in 1386 and played a major role in shaping the Renaissance movement from the onset of the period. He is best known as Donatello and is credited with being one of the most notable sculptures of the early portion of the Renaissance period.

He began studying sculpture during his formative years and would go on to develop a style that was one which quintessentially represented the ideals and values of Italian Renaissance sculpture.

His statue of David is regarded as one of the greatest Renaissance sculptures ever created.

Donatello was known to work in a variety of methods to produce his works and many of his most famous sculptures adorn some of the most prestigious cathedrals in Italy. He created statues of various religious figures, as well as political leaders of the day in full forms, as well as reliefs.

Sandro Botticelli is another one of the most famous Italian Renaissance artists to have ever lived. He is another figure who hails from Florence and was introduced to the world of art from an early age as he was born during the height of the Early Renaissance period in 1445.

Little is known about the personal life of Botticelli as he was not as widely famous during his own lifetime in comparison to such figures as Da Vinci and Raphael.

He is credited with creating some of the most well-known and studied paintings from the early Italian Renaissance period. Some of his most notable works include The Birth of Venus and others that depict a range of mythological figures from Greek and Roman legend.

Botticelli also produced various works that centered around the Christian faith, including a number of paintings featuring the Virgin Mary in a series of Madonnas.

Tiziano Vecellio is another one of the most famous Italian Renaissance painters who lived and worked during what art historians consider to be the High Renaissance period.

He is best known as Titian and is credited with being among the greatest artists of his day as he was a true master of color.

Many of Titian’s greatest works span across a range of subject matter that include religious figures and themes, as well as mythological figures and landscapes.

It is the variety with which he was able to produce that helped catch the eye of art historians and critics since he lived and worked in Venice, Italy.

His use of color would be one of the most influential items that would be carried on long after his death as students have studied the works of Titian even into present day in order to gain a more full understanding of how each color can be applied in different situations.

Giovanni Bellini was born in 1430 into what would later become one of the most prominent families in all of Italy as it related to the arts.

His paintings were credited with being of such incredible quality that art historians and critics have credited Bellini with shifting the Renaissance movement as a whole towards a more encompassing use of colors.

Bellini is known to have focused more heavily on religious themes in his paintings while many artists from his day were still very much affixed to painting mythological figures.

His works have a sense of soft contour, as well as vibrancy of color compared to many of his colleagues who worked during the Early Renaissance period.

Most of his works also involve a heavy amount of symbolism, which was slightly uncharacteristic until the latter portion of the Renaissance period.

Andrea del Verocchio is another artist who is among the great Italian Renaissance artists. He lived and worked during the early years of the Renaissance, producing many works that are held in high regard among the various painters and sculptures of his day.

He ran a prominent workshop and was said to be totally involved in his work as he never married throughout his lifetime.

Verocchio is perhaps best known for his ability as a sculpture rather than a painter. He is also known to have worked with Da Vinci and other notable figures from the height of the Renaissance period.

His final work as an artist, the Equestrian statue of Bartolomeo Colleoni, is widely considered to be his best.

Domenico Ghirlandaio was a painter who was, by most accounts, born into a family of artists in Florence in 1448. He worked alongside his brothers and other relatives in his workshop and also taught numerous artists various forms and techniques that were common during the Renaissance period.

One of his most famous students was none other than Michelangelo himself.

He created a number of famous masterpieces that were highly regarded for their vibrant color, as well as the artist’s use of perspective to create a very lifelike appearance in many of his most notable works.

His paintings had a very clear foreground and background with many of them offering what seemed like an incredibly realistic depiction. This was mostly due to his high attention to detail in the background of each of his works.

Giorgio Barbarelli da Castelfranco was born in the 1470’s in the small town of Castelfranco Veneto, which was not far from Venice. Throughout his career, he would become better known as Giorgione, but very little is known about the entirety of his works, or his personal life in many respects.

Giorgione died at a relatively young age, but the few works that are said to be his are among the most respected of any from the Italian Renaissance era.

He was a master of contrast, as some of his works feature a curious darkened background with beautiful, illuminated figures depicted in portrait.

Giorgione died of the Bubonic plague in 1510, but he is said to have had many students study under him and various art historians claim that many works had previously been misattributed to him up until very recently.