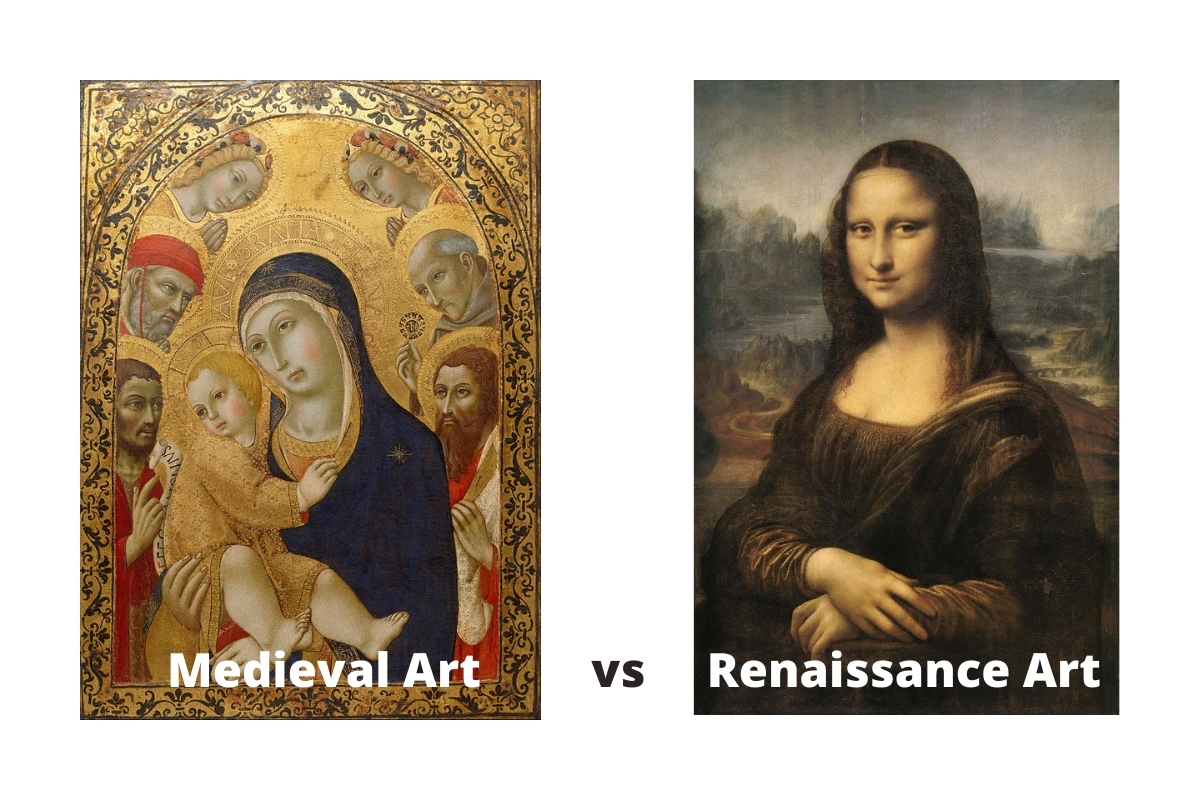 Two of the most notable art periods in human history are known as the Medieval and Renaissance Art periods. While the two are vastly different in their focus, technique, and other areas, many of the artists from both genres came from the same places and shared many things in common with one another.

Medieval art is characterized as a darker period that ranged from about the 5th century to roughly the 16th century. It was widely known for being a time in which artists heavily focused on religious works which featured depictions of Christian and Judeo-Christian stories and beliefs in the form of painting and sculpture.

The Renaissance, on the other hand, was completely different in that it was a time when artists began to explore the brighter, more elegant ideals and values that were centered around an awakening and a time of learning, exploring, and developing things to make life better for all of humankind.

The very word “Renaissance” means ‘awakening or rebirth’ and serves as a fitting description of this time where legendary artists like Michelangelo, Raphael, and Leonardo Da Vinci thrived and produced works that are still considered to be the greatest paintings in history.

Comparing and contrasting the Medieval period with the Renaissance reveals some very interesting points as to how each movement developed and also shaped the course of history in their own right.

The Medieval art period began around the 5th century, according to most art historians and critics familiar with the time period. It spanned more than 1,000 years and some of the most prominent artists of the Medieval period are famous for their depictions of religious figures like Jesus Christ and other Judeo-Christian religious leaders.

Medieval art was produced during a time when the world was going through very dark and trying times for much of Europe and the rest of the world.

The Middle Ages were a time of economic hardship, as well as harsh rule by overly violent and bloodthirsty kings and emperors across much of the known world at the time. Throughout the Medieval period, there were very few inventions and improvements in general as people were constricted by extremely strict governing entities.

War and fighting was common during the Middle Ages and struggle, hardship and death was as much a part of life as breathing for many people. After the first millennium was over, most of Europe was no longer gripped by the invasions of outside cultures and life was no longer dominated by violent struggles in the same way it had been.

The Medieval period saw many different specific styles of art spring up throughout Europe and the Middle East. Some of these movements include Romanesque, Byzantine, and Gothic.

The artistic influences were not limited to the painted canvas, but rather showed in every part of life inside the large cities and population centers in the form of great architectural achievements and structures that are still revered as some of the greatest works of art in history.

Some of the most important artworks from the time period toward the latter half of the Medieval period could be accurately described as an effort on behalf of the artist to document historical events and stories.

This was mainly due to the fact that so few people had the ability to read, artwork served as a means of storytelling that could easily translate to any language.

Compared to the Medieval period, Renaissance art can be described as a more advanced time in which a great awakening was slowly taking shape across the known world. Italian painters, sculpture and others were at the center of the Renaissance movement and they are credited with producing some of the most notable artworks in human history that still endure to this day.

The Renaissance saw great achievements in not only art, but science, literature, music, and other areas that had a lasting effect on the course of history. Renaissance artists, much like their Medieval counterparts, produced paintings that centered around religious figures and scenes, but Renaissance painters were known for striving to incorporate as much beauty in their works as they possibly could.

The early Renaissance began around 1400 A.D. and featured such artists as Giotto and Donatello who were prominent in painting and sculpture. The High Renaissance is perhaps the most famous period during the art movement as it was a time in which artists like Leonardo Da Vinci, Michaelangelo, and many others produced breathtaking works of art that are revered as some of the most celebrated paintings and sculptures in history.

The Major Differences in Medieval and Renaissance Art

The Middle Ages was well-known as a time when art styles like the Gothic genre emerged as a prominent style across much of Europe. During this time, artists worked hard to design various cathedrals and other notable buildings in such a way that they featured pointed arches and ribbed vaults that were largely unlike anything the world had ever seen until this point.

Many Medieval paintings were lacking in areas like perspective and overall detail when one looks at the works from the period. Many artists painted in a way that glorified the stories and beliefs of Judeo-Christian teachings, but there was not as much effort put into creating sharply realistic figures and scenes of beauty in the way the Renaissance painters worked.

Renaissance paintings offer unique compositions that direct the viewer’s eye to the most important parts of the painting in many cases.

Renaissance paintings feature a much higher level of realism in each and every portion of a particular work. The most famous Renaissance painters are well-known for their ability to create lifelike images and scenes that truly resonated with the viewer in more ways that simply hearkening back to a religious story or event in history.

The level of depth perception in works by painters like Da Vinci and others is truly astonishing when comparing them to almost every other time period throughout history.

While Medieval artists main concentration was on Religious Paintings and paintings of Christ, the level of quality in their paintings was severely lacking in comparison to Renaissance painters.

Art historians hold to the belief that artists and others from this time period were more heavily focused on their individual religious beliefs than they were on painting a masterful work of art.

The Renaissance was a time in which some of the most prominent artists in the world seemed to have a greater focus on the overall quality of their artwork than the subject matter itself. This led to some of the greatest masterpieces in history being painted and many of the Renaissance works of art still remain among the most impressive works ever done.