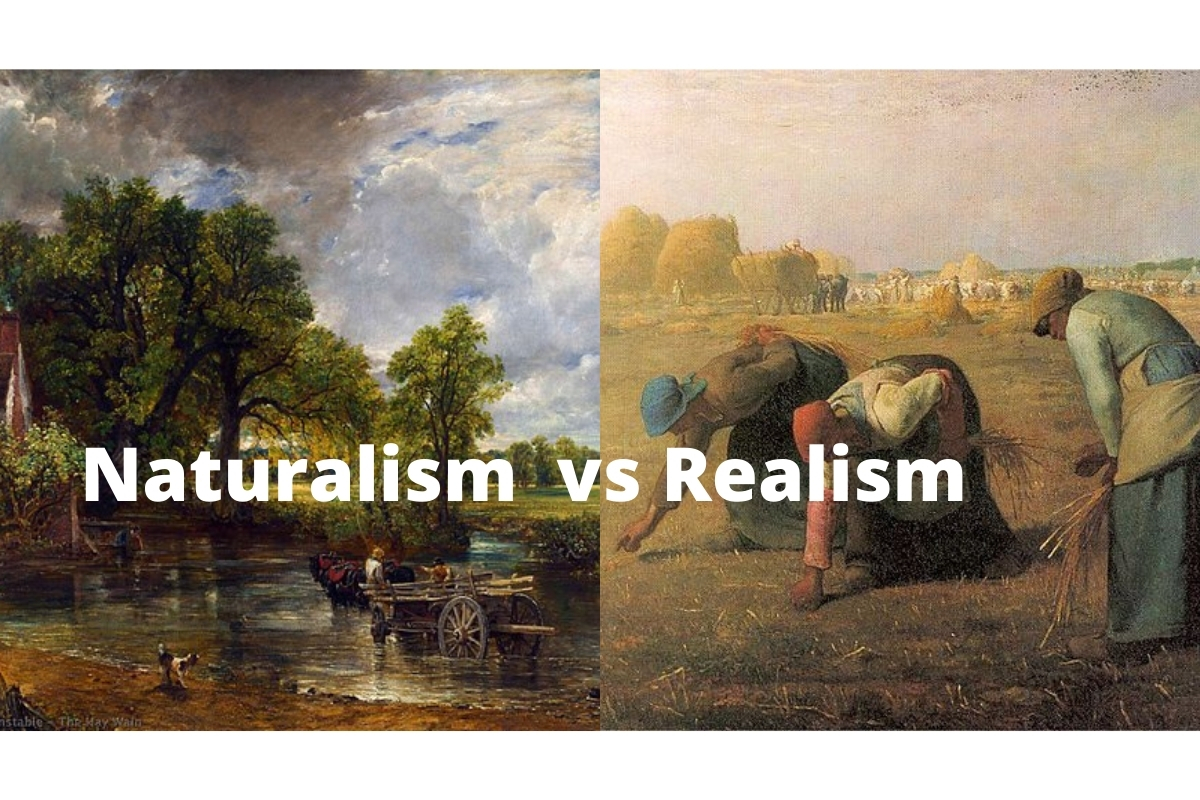 The two art movements that are recognized today as Naturalism and Realism are very similar on the surface as the two share many points of interest and key areas that portray the world around them in an accurate, truthful manner.

However, these art forms also have some differences that separates them from one another.

It is in recognizing these differences that one can truly see and appreciate the underlying influences behind Naturalism vs Realism and better understand the aim of each movement.

Romanticism is known as an art movement that was heavily-influenced by the artist’s interpretation of the subject matter they were choosing to depict, rather that focusing their efforts on portraying what was before them in a manner that was as accurate as possible.

When reviewing both styles, we can see that the differences between Naturalism and Realism might seem somewhat insignificant compared to the contrasts between these two art forms and influential movements like Impressionism and Romanticism.

In this article, we will delve into the deeper underlying meanings and intentions that artists from the Naturalism and Realism eras are said to have worked with, as well as highlight the differences that made each one unique in its own way.

Naturalism tried to capture scenes as the appeared in an almost photographic representation and was less concerned with ‘what’ was captured whereas Realism was an effort to capture the real world as the artist experienced it, in particular the lives of the lower classes.

Realism was an effort to record the world as it happened as opposed to some idyllic country scene that was painted to near photo-realistic standards.

The Naturalism movement began in the 19th century and was one that shaped the trajectory of artistic expression moving forward up until present day. While it may be commonplace for viewers today to have a healthy appreciation for works that depict the world around us in an accurate manner, there was once a time when this concept was mostly foreign.

Many artists before the Naturalism era began to portray the world around them in a way that included their own interpretations into the meaning and importance of different elements.

This was very much the driving force behind such art movements as Impressionism, Romanticism, and other movements like them. These movements included paintings that depicted the world in a way that includes the artist’s own interpretation as to how the scene before him or her makes him feel, as well as the impression it leaves on the artists’ mind.

When Naturalism began to develop, artists increasingly began to appreciate works that were centrally-focused on depicting the world around them in a manner that is as accurate as possible.

This is mostly due to the fact that the teachings of the Theory of Evolution were beginning to gain prominence in academia and other areas of society.

With so much more respect being placed on things like natural selection and evolutionary progressions, artists sought to capture this idea by creating paintings that simply depicted nature as it truly appeared, without any additives or other elements given later after the artist had worked on the painting for some time.

This idea gave rise to the practice of painting various subjects “en plein air” or “in plain air,” meaning artists would bring their canvas, paint, and other materials with them to the location where they scene they wanted to depict was located and paint while actually looking at the area.

Realism is an art style that is said to have originated in France during the middle of the 19th century. It is recognized by art historians as a time when certain artists were actively working to create works that were more truthful than those that were part of the Romanticism movement.

The main difference between the Romanticism and the Realism movements was the fact that artists typically included their own personal interpretations regarding their subject matter when it came to Romanticism.

Realism was an art movement that largely embraced the world around us in a way that tells the truth of what is actually happening instead of dressing up certain subjects with more lively colors or other elements that are more aesthetically pleasing.

The root of Realism can be traced back to the sense of truthfulness and accuracy that is the driving force behind journalism.

Many art historians say that some Realism artists from late 19th century France actually worked to depict the world around them as accurately as possible as a means of capturing what was really going on instead of focusing on certain subjects that the artist might choose at their own discretion.

This is considered the earliest form of what we now know to be photojournalism as the artists worked to seek out certain parts of society that had mostly been neglected by master painters in the past and seeking to depict them in a way that showed the world the truth and reality of what life was like for certain people.

Main Differences Between Naturalism and Realism

When it comes to pointing out the differences between Naturalism and Realism, we need to look at the subject matter that was largely focused on in each movement in order to better understand the aim of the artist and their intentions in creating the work.

Unlike Romanticism and Impressionism, these newer eras and styles that we now know to be Naturalism and Realism featured paintings that often depicted subject matter that was deemed beautiful and pleasing to look at for viewers.

It was uncommon for artists during the movements prior to Naturalism or Realism to focus on people in their natural state. These works often included painting people while they were at work in the fields, or even trudging away inside some of the factories and industrial centers that had sprang up in most large cities by the mid-1800’s.

When it comes to Naturalism paintings, some of the most prominent artists from the movement chose to mostly focus on landscapes more than anything else.

This is mostly due to the fact that these artists sought to portray nature in all its glory and splendor without adding in anything that was deemed unnatural. Many of them wanted to depict nature in its truest form in order to highlight the idea that different creatures are designed to interact with one another in a certain way.

One of the most prevalent theories of why Naturalism painters chose to paint landscapes was to communicate the idea that nature is more powerful than human beings and that the natural world has the ability to overpower or dominate mankind if it so chooses.

Realism, on the other hand, was a movement that focused as much on the world around it as Naturalism, but the artists who were considered Realism painters chose to portray the world as they actually saw it on a day-to-day basis.

In many cases Realism painters would create works that featured people lounging around, doing nothing of significance, or even engaged in hard, backbreaking labor that was essential to survival for most people outside the large cities who lived in rural areas.

This would have been viewed by Romanticism and Impressionist painters as something that is not worthy of a masterful artist taking the time to paint, but Realism artists sought out scenes like this in order to give viewers a true glimpse into the world around them.

Realism was a movement that showed the well-to-do, city-dwelling individuals of the time period what life was like for those who were more or less considered peasants and were forced to work hard each day in order to get by.

Realism artists saw a sense of nobility in communicating these truths to the rest of the world and thanks to them, we now have highly accurate records of what life was like for rural, lower-class Europeans during the 19th century.

The styles of Naturalism and Realism share quite a few similarities, but understanding the differences between the two helps to give us a whole new appreciation for each movement.

These movements started during a time when the world was rapidly changing and each painting from both styles helps to give us a greater sense of appreciation for our own state of being.