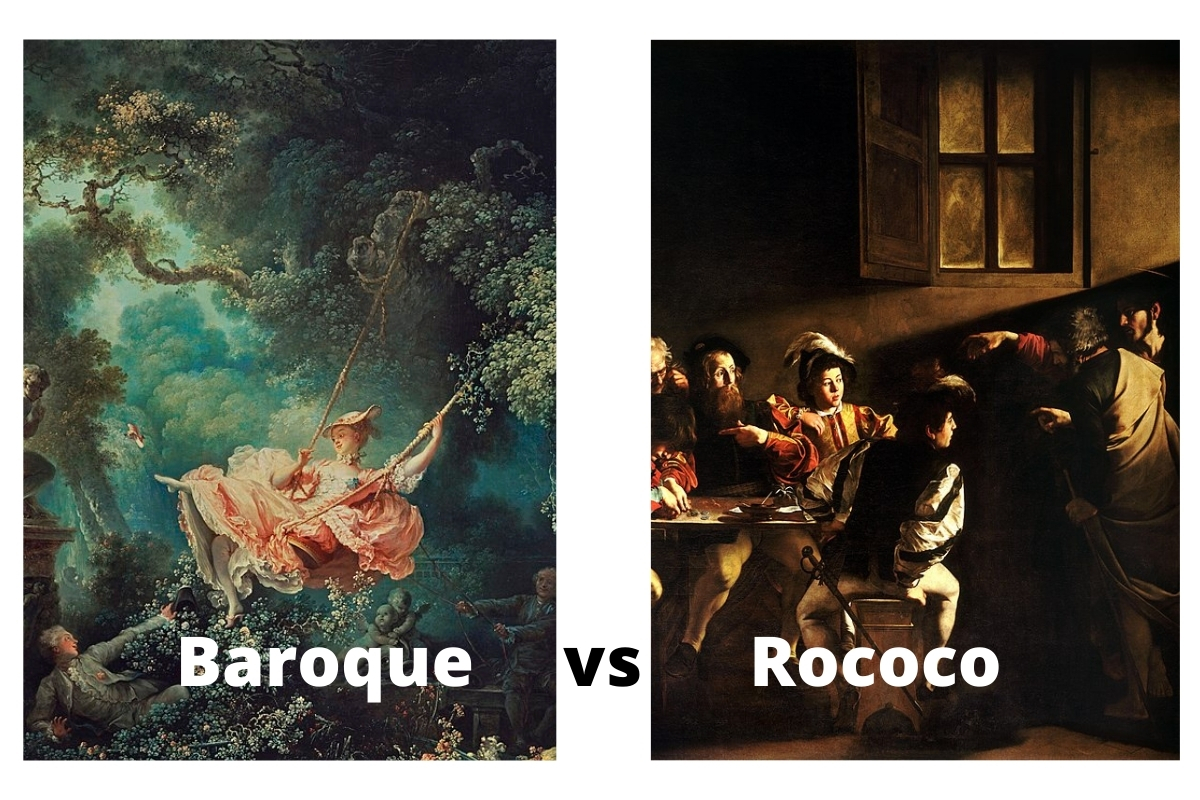 The early 17th century was a time of grandiose architecture, painting, and other aesthetic elements as the Baroque movement began to emerge early in the 1600’s.

The art style would last well into the next century before another peculiar style of expression called Rococo took the place of the once extravagant Baroque methods of expression.

The two art styles might appear to have many different similarities on the surface, but a more in-depth analysis of both Baroque and Rococo art prove that the latter held significant differences over the other.

While the two styles impacted French and European architecture more than other types of artistic expression, the realm of painting also witnessed notable transitions between the time period when Baroque would later shift and give way to the Rococo movement.

For many years, art historians and critics have studied both art genres and pointed toward various aspects of each as indicators of their own unique characteristics.

While the two movements were largely similar to the outside world, those who were involved in the world of Baroque and Rococo art are well-versed in the differences that are quite prevalent in each style.

The Baroque art period was born out of the growing extravagance of the Renaissance period that had significant impacts on the world of artistic expression as a whole.

In the early 17th century, the Baroque movement began to emerge as a means for artists with deeply-held convictions toward the Catholic faith to express themselves in a way that was unlike other movements that came before them.

The Baroque movement is said to have been largely encouraged to shift away from other influences as a means for the people of France and the Iberian Peninsula to express themselves in a way that was markedly different than other parts of Europe that were more heavily influenced by Protestantism at this time.

The movement was characterized by stark differences in contrast and deep levels of detail, as well as moving figures that were often of a religious nature. According to art historians and critics, the aim of Baroque artists was to inspire a sense of awe in the viewer as a means to instill a sense of appreciation for the divine elements of various works.

The Baroque movement began in Rome, Italy as the Renaissance finally tapered down to a halt and later spread throughout other parts of Europe before making its way into parts of Russia and Germany.

There is a lot of crossover in the techniques used in both the Baroque and Renaissance art movements but their focus was considerably different.

The movement left a lasting impression on much of European society as many of the most wealthy and aristocratic families in the continent sought to display their wealth by acquiring extravagant paintings, sculptures, and furniture.

The period finally came to an end around the middle of the 1700’s after artists of the Baroque movement created works that were aptly described as increasingly flamboyant.

As the Baroque period faded into history, the Rococo movement sprang out of France as so many other art movements have done throughout history. The art style began as a means to oppose the increasingly rigid and straight-lined methods of French Classicism.

Many of the most notable Rococo pieces of architecture and other works were known for their elaborately decorated shapes, scrolling curves, and illusions of dramatic motion.

The Rococo movement began in France and would later spread to every other part of Europe by the end of the 18th century, including parts of Russia. The style is most commonly associated with the interior of large houses that were owned by extremely wealthy aristocrats and those in power.

The term ‘rococo’ comes from the French word ‘rocaille’ which pointed toward an elaborate method of decorating the exterior of grottos and other exterior structures with pebble-like patterns.

Many art historians note that the term ‘rococo’ was not actually used in reference to the works of art associated with the time period until later in the early 1800’s when it was used to describe a style that was ‘out of style’ according to the popular forms of artistic expressions of the day.

The Rococo style is one that had lasting effects on much of European architecture, as well as that of the United States and other areas of the world well into the 1900’s. It was a symbol of wealth for many American families and much of the original Rococo paintings and architecture still stands where it was prominently displayed more than a hundred years ago.

The Baroque period was one that shifted away from the classic styles of the Renaissance painters and depicted figures and scenery with increasing levels of illusion-like depictions. The space in Baroque paintings were used by the artists as a means to incorporate the viewer into the work itself in many cases, which was a clear departure from the earlier Renaissance style of painting.

Many of the churches and other areas of religious significance were decorated with these incredibly realistic depictions of famous events and stories that are recorded in the Judeo-Christian Bible.

One of the most obvious characteristics of the Baroque period is the stark contrast between light and dark. Artists like Caravaggio and others actually used light in a way that indicated divinity itself in many paintings.

Baroque paintings also were done in much greater depth than the paintings of the Renaissance that preceded them. Artists would paint figures and entire scenes in a way that highlighted the three-dimensional nature of the world as it actually appears to the human eye.

Lastly, many Baroque painters created works that embraced the dramatic nature of the stories and events they were aimed at depicting. Instead of portraying individuals and settings in a calm, serene manner, Baroque artists would seek to highlight the climax of any event and capture its essence in the most dramatic fashion possible.

Characteristics of the Rococo Movement

Instead of working to portray religious works in a highly dramatic fashion, painters during the Rococo movement sought to create works that focused more on the innate beauty of various scenes, as well as an increasing attention to the perspective of a particular work.

Many of the era’s most famous artworks still displayed what many would consider to be a very elegant depiction of the circumstances surrounding the subject.

Rococo works of art and architecture became a clear symbol of aristocratic wealth, power and social status within French society, as well as other areas in which the art style became exceptionally popular. Many wealthy French families decorated their homes in such a way that they were seemingly overflowing with Rococo artistic flair.

Unlike the Baroque period that preceded it, painters of the Rococo period sought to use light as a means to bring attention to the natural beauty of various figures and objects.

Where Baroque painters had used large amounts of dark, shadowy colorations surrounding their works, Rococo painters embraced the light of the sun and painted scenes that were often full of light.

The most clear departure from the Baroque manner of portrayal was in the nature of the subjects themselves for many Rococo painters. These paintings displayed an increasing level of playfulness, as well as elements that art historians and critics of the day considered to be bordering on sinful nature.

The subtext of sexual promiscuity was obvious in many French works during the Rococo period and romance became a central theme that would last well into the 19th century for many artists.

Famous Painters of the Baroque and Rococo Movements

There are few artists that enjoy more fame from the Baroque era than Michelangelo Merisi da Caravaggio. His works had traces of the Renaissance period that came before him, but Caravaggio is credited with playing a major role in developing the appreciation for contrast between light and darkness.

Virtually all of his most famous paintings use high levels of bright, shining light, as well as deep, dark shadows. These types of shadows were also used by painters like Nicolas Poussin and Diego Velázquez to indicate the element of evil that is ever-present in the minds of those who closely adhere to the Catholic faith.

Peter Paul Rubens was another notable painter from the Baroque period who is best known for painting highly-dramatic scenes that were charged with emotion. This high level of emotional significance would go on to become a pillar of the Baroque movement and style throughout the entirety of the artistic era.

Painters from the Rococo period are somewhat less famous than their earlier counterparts. The movement still had masterful artists like Antoine Watteau who created works that helped to revive interest in colors and movement in a way that was less striking than the often overly-dramatic Baroque style.

François Boucher is another artist of the Rococo movement that created works which had a classical element to them. Many of Boucher’s most notable works were heavily-steeped in allegorical meaning and decorative nature.

When it comes to the major differences in the Baroque vs Rococo movements, many casual art observers might conclude that the two are largely similar in nature and very little differences can be distinguished between them.

A closer look at the most notable works of each era, as well as the artists who created them reveal a deeper level of meaning that is actually the most significant difference.

The Baroque style owes much of its fame to the deeply religious nature that was so prevalent across much of Europe during the 17th and early 18th centuries. The Catholic church was perhaps the most influential factor in the rise of the Baroque style, according to some art historians.

When the Rococo movement began to grow out of the remnants of the older Baroque era, artists once again began to explore elements of romance and a wider range of human emotion.