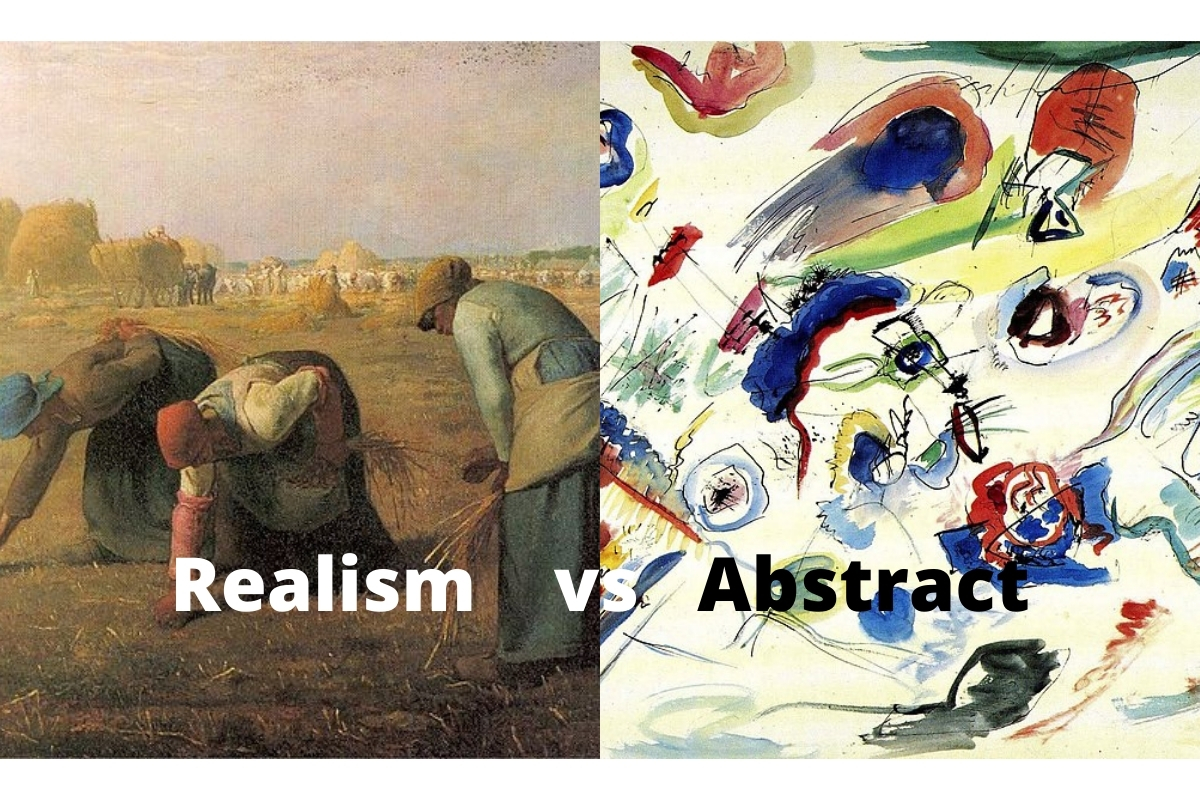 Throughout human history, there have been numerous movements within the art community that have been influenced by artists and their aspirations in creating works that communicate a range of meanings.

Over the course of the last several hundred years, two specific forms of artistic expression have dominated various styles all over the world—Realism and Abstract art.

As humans became more advanced thousands of years ago and began to better portray the world around them in a more accurate manner, there was great value placed on an artist’s ability to create paintings that closely resembled what their subject actually looked like.

This concept changed to varying degrees throughout the centuries up until the Renaissance and the overarching theme of art movements that were based in Realism gradually shifted into new and unexplored avenues that gave way to Abstract expressionism.

On the surface, the untrained eye might view Realism as the more prominent manner of self-expression and a more meaningful way of portraying the world around us, but it is Abstract art that has garnered more praise from art critics and enthusiasts for its ability to draw the viewer in and truly provoke deep thought in relation to a specific work.

The main differences between Realism and Abstract art is that realism represents the real world and how it is truthfully observed versus abstract art that has no real composition and is separates itself from the subject.

Looking deeper into the driving factors behind Realism vs Abstract art reveals the overall aim of the artist and how each style of expression is able to evoke certain instinctive reactions and emotions from viewers.

The Origins of Realism

Throughout time, humans have worked for thousands of years to better depict the world around them. From the earliest, crude paintings on caves to the remarkable masterpieces of the Italian Renaissance, the concept of Realism has been a driving factor for artists to create works that are mostly meant for the viewer to have the ability to appreciate the natural intrinsic beauty of the world around them.

The Realism movement began in France around the middle of the 19th century and was focused very heavily on painters portraying the world around them in a manner that is as accurate as possible.

Up until this time, art movements across the world, especially in Europe, had consisted of painters who worked to depict various historical events and even religious figures in ways that embellished or signified a higher sense of divinity and importance.

The type of exaggeration that was used in the centuries around the Renaissance was meant, in large part, to further emphasize the importance of the subject itself and the idea that humans can only attempt to capture a small fraction of the glorious and unimaginable nature of God or other divine beings that are not able to be seen by humans.

Many artists gravitated toward depicting religious figures and subject matter in a way that highlighted the nature of their own belief in the supernatural.

Later in the 1800’s, artists began to depart from the school of thought that the everyday, mundane interactions of life are not quite worthy of being portrayed by the hands of prominent and talented artists.

Many painters from this era began to produce works that depicted the world around them and many aspects of life that had long been shunned when it came to making these realistic scenes the subject of their works.

As the Realism art movement took shape, it became a new and interesting way for artists to share just what the world looked like to others who might not have had the ability to venture far outside the reaches of their own home village or nation.

Realism is an art movement that is often referred to as naturalism by some art critics and historians. It emerged as a means for painters to accurately and unashamedly create works that captured the world around them as it really existed—a concept that had truly never been explored in great detail until this time.

The underlying sense of Realism has been prevalent in some form or another for many years before the actual movement truly began in the 19th century.

Once it started, Realism artists worked to portray landscapes, cities, and various people going about their daily lives or engaged in social interactions that highlighted the more delightful nature of humanity.

As the movement grew, however, it shifted into a means for artists to capture and portray certain instances and issues within countries where people were living in overly harsh conditions while those in power seemed to enjoy a much less stressful existence.

Realism became a means for artists to serve as activists in bringing to light the rough conditions or certain things that were happening in their own countries and others and use their paintings to bring these injustices to light in an effort to correct them in some way or another.

Throughout the years since Realism first emerged as an art style, many painters and other types of artists have closely adhered to the principles of creating works that very closely resembled what the naked eye sees in reality.

The Emergence of Abstract Art

As the style of Realism continued to take hold in various parts of the world and drive artists to seek new and improved ways to depict the natural world around them, other painters and artists sought a new way to represent objects, figures, and other scenes from the real world in a way that evoked a new level of imagination and appreciation from the viewer, as well as the artist.

The concept of Abstract art is that of one representing a clear departure from the natural appearance of any specific thing and an effort to explore different elements that are both aesthetically pleasing to the eye, as well as thought-provoking.

Abstract art utilizes a variety of images and visual representations that are mostly aimed at depicting reality in a new way that has deeper ties to the human mind, emotion, and spirit.

Abstract art exists in many different forms and there are few artists who truly adhere to a strict sense of guidelines or rules when it comes to just how they prefer to depict whatever it is they are intending to share with the viewer.

It is a form of art that is much more liberal in its ability to allow one to explore colors, shapes, perception, and the many other elements that are clearly defined in the natural world.

There are many different ways that artists have worked in and explored abstract elements of painting, drawing and other forms of expression.

Certain artists in Asia during the 13th century created works that were very much Abstract in nature, but there is very little else known about them besides the time period they were created and the artist that either painted or drew them.

Painters of the Realism movement were known for taking great pride in creating works that were truly breathtaking in their ability to closely resemble the actual world and capture certain scenes that are full of details and perfect elements of composition, perception and other aspects.

The overall theme for most Realism painters is to depict the subject of their works in such a way as to inspire awe in their viewers who they hoped would appreciate the extremely difficult nature of painting works that appear to be real.

While Realism is an art movement that leaves little to the imagination in most cases, it can be difficult for the artists to communicate various underlying meanings through their works in the same way Abstract art is capable of doing.

Realism can be appreciated on many levels as it is often aimed at being remarkably lifelike, but there are few ways that a Realism painter can relate their overall emotional or mental reaction to such a scene in the way that Abstract painters are able to in many ways.

When it comes to Abstract art, painters often create works that are sometimes tough for the untrained eye to distinguish between what type of object, figure, or scene is actually being portrayed.

However, through the use of various bold and intense colors, shifting perspectives, and multiple dimensional views, Abstract artists can often communicate an overall sense of emotion or thought process with their viewer in a way that Realism simply cannot match up to.

Abstract art is a simple representation of abstract concepts through the use of often simple imagery and portrayals.

Some Abstract paintings might appear to be seemingly simple in nature upon first glance, but a closer, more thorough review of the work itself often reveals a greater sense of emotional connection between the artist and their psychological or emotional state and their ability to communicate this to the viewer.

Realism has existed in some form or another for many centuries. The Renaissance period was filled with artists who took great pride in painting scenes from the Judeo-Christian Bible with a renewed sense of Realism that brought the stories and teachings of the Christian religion to life in a way that had never been done before.

Artists like Leonardo da Vinci, Michelangelo and others are known to have spent considerable amounts of time studying the world around them, as well as the human form in efforts to better portray their works in a manner that was as realistic as possible.

As the Realism movement took shape, painters like Jean-Baptiste-Siméon Chardin and Diego Velazquez took the concept of realistic painting to new heights and created works that were captivating by any standards.

Many of the most prominent works from the Realism movement were so realistic that they appear to have been a photograph snapped right out of history.

When it comes to Abstract works, there are varying degrees of painting that have been prominent at one time or another. Such art movements as Surrealism, Cubism, and many others were styles that could be traced back to Abstract ideals in many cases.

Many of the most prominent artists from these movements like Salvador Dali, Pablo Picasso, and others are regarded as some of the greatest masters the world has ever seen.

Both Realism and Abstract Art exist today much in the same way they have for centuries. There are various artists who are seeking to further dive into the depths of human psyche when it comes to Abstract artistic expression.

This is done through many other artistic means such as painting, photography, and even videography. The underlying meaning and intention of Abstract art remains very much the same as it did when it began in the early 19th century in Europe.

Realism is also very much as popular as ever with artists striving more and more to create works that closely resemble the real world around them.

Some painters are able, with the assistance of photography and other modern aids, to create works that are hyper-realistic in just about every sense.

Both Realism and Abstract art are as popular as ever and appear that they will remain so for the foreseeable future.