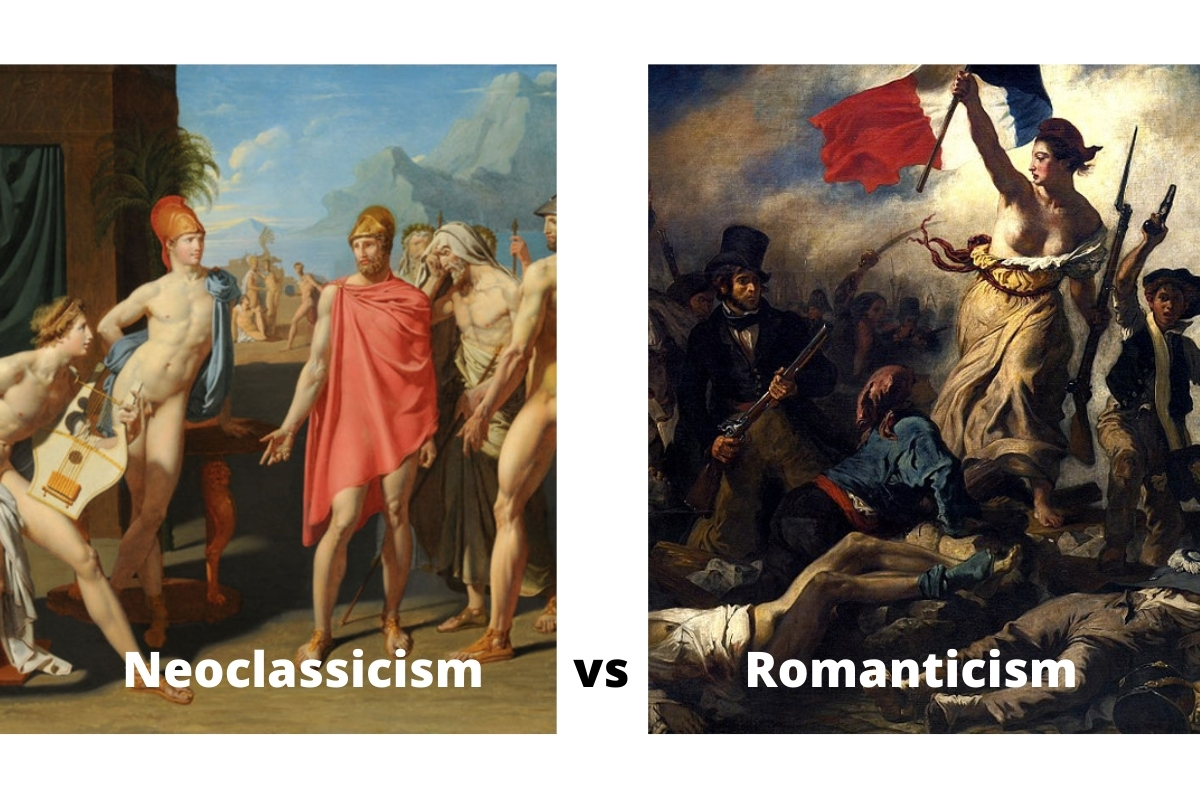 During the early to mid-18th century, two different art movements emerged in Europe and would run parallel to one another for a number of years, shaping the course of artistic expression.

Neoclassicism was defined by its very close adherence to the ideals and practices of Greek and Roman traditions while Romanticism was a genre that was centered around the varying degrees of human emotion, as well as individuality.

While the Romantic era is believed to have started in France, the Neoclassicism period began in Italy around 1750. The two movements were often at odds with one another in the same areas of Europe, but represented very different ideals.

Both styles of art were mostly reactionary to the time periods that either immediately preceded them, or had already begun to emerge in Europe.

The Neoclassicism movement was based more on the common Greek and Roman focus of viewing everything through a somewhat objective lens, as well as working to appeal to the human intellect and methods of reasoning.

Romanticism, as the name indicates, was largely centered on raw human emotion that was the driving factor behind the creative, aspirational nature of humans.

A more in depth study on both the Neoclassicism vs Romanticism reveals how artists from each movement used their different ideals and motivations to create some of the most stunning artwork in history.

The Neoclassicism era was heavily influenced by a wide range of visual arts and means of expression that had been captured many years prior.

Artists from the Neoclassicism period sought to differentiate themselves from the Renaissance movement that had dominated Europe and every form of artistic expression for well over a century before.

Many young artists traveled to various parts of Europe, including the regions that were most heavily-influenced by Greek and Roman thinking and artwork.

These artists returned to their home countries of France, Spain and other areas with a newfound appreciation for the artwork that was created by masterful painters and sculptures during the height of the Greek and Roman culture many years prior.

Instead of focusing intently on religious themes as the painters of the Renaissance period had done, many artists were captivated by the beliefs and stories that were passed down in Roman and Greek culture for centuries before the Renaissance movement began.

The Neoclassicism era was very much a response and clear departure from the Rococo movement that had also emerged around the same time period.

The Neoclassicism movement began to taper down in the early 19th century and finally had been passed by in the latter half of the 1800’s.

Many artists developed stunning paintings that harkened back to the time when Greek and Roman philosophy was praised for its element of enlightened thinking. According to art historians and critics, the art movement is credited with having a lasting effect on the styles of art that would come after it.

While Europe was being inundated with artistic styles that were based on past cultures or various ideals, Romanticism sprang out in the late 18th century and quickly caught on with young, aspiring artists as it was inherently new in many ways.

Compared to the art genres that had been present in Europe up until the early 1700’s, Romanticism brought a fresh, new perspective that explored the many different emotions of humankind.

Many of the earliest paintings of the Romanticism movement showed a stark difference from the overtly religious works that had been the focus of the highest levels of European society.

The influences of both the Catholic church and the Protestant Reformation reached deep into every corner of the everyday life of Europeans up until the 1700s, but after the middle of the 18th century, artists began to seek out new and exciting elements that would drive them to develop some of the greatest works from what we now know as the Romanticism era.

The Romanticism era artists worked to portray humanity in a new and more realistic way that truly highlighted all of the faults, as well as achievements that mankind had made.

In many ways, the Romanticism period was a reaction to the Neoclassicism movement that was taking place throughout Europe at the same time. The overarching theme of the entire Romanticism movement can be summarized by the word ‘passion.’

When it started in the mid-1700’s, Neoclassicism closely resembled the Renaissance period on the surface. Many works from both periods might appear to be similar in nature as they have relatively the same level of depth and coloration, as well as composition.

The true differences start to show when one examines the paintings of the Neoclassicism era more closely to gain a better understanding of the underlying message that each work had.

Many of the most famous paintings from the Neoclassicism movement were centered around stories and ideas that could trace their origins in ancient Greek or Roman culture.

As the 18th century closed and another one began, artists increasingly focused their efforts on promoting ideas that focused on order and balance, as well as the principles of reason. These were all areas of art that had largely been ignored during the periods that came before Neoclassicism.

Some of the most well-known artists from the Neoclassicism movement sought to mimic the same style that some of the most prolific Greek and Roman painters had been able to create.

This concept led to many art critics and enthusiasts at the time to name the movement under the Neoclassic moniker as it pointed back towards the ‘classic’ era when Greek philosophers and Roman artists followed after ideals that held reason and human logic in high esteem over things like religious faith.

The paintings of the Neoclassicism period were created with strong linear concepts that heavily-focused on vertical and horizontal imagery.

The figures in most works were painted in a way that allowed the viewer to have a clear image of the forms, unlike the Renaissance and other movements that were taking place in Europe at this time.

The colors that were mainly used by Neoclassicism artists consisted of common hues that were not as vivid as tones used in other movement styles.

The Romanticism era was filled with life and passion as many painters embraced the idea of depicting humankind in its true, unfiltered form.

Painters focused on a variety of different ideals, stories, and historical events in their Romanticism paintings. They painted many different works that were all related to the deepest, most basic elements of human emotion that dealt with love, war, beauty, exploration, and many other ideals.

Many art historians and critics have noted that the Romanticism movement brought new focus on human characteristics that had largely been either ignored or dampened throughout the other movements leading up to the Romanticism period.

As the Industrial Revolution began to take the world by storm in many developed countries, artists sought to paint images that reminded people of their own sense of individualism.

Nature was a very prominent focus of Romanticism painters during the early phases of the movement, as well as when the era reached its peak.

Artists would commonly paint people in a natural setting that portrayed both humans and nature in a way that highlighted their own intrinsic beauty. In fact, artists that were from the regions of Germany and Russia developed their own certain style of Romantic painting that solely focused on nature.

In addition to works depicting the mystical properties of nature, Romantic paintings also painted in ways that left visible brushstrokes which were often used to intensify certain elements of the work.

Romanticism paintings typically featured bold colors and light and dark differences that sometimes created a ‘glowing’ sense of reality. Throughout the movement as a whole, Romanticism was a period that centered around depicting the many different human emotions in their most pure form.

Main Differences in Neoclassicism vs Romanticism

According to the most respected art critics and historians, Neoclassicism differed from Romanticism on a very basic level.

Neoclassicism paintings were done in a way that focused more on things like reason and objective thinking. Artists of the Neoclassicism era portrayed different scenes and figures with very clear structure and composition.

It was intended as a clear departure from the highly ornamental nature of Rococo painting, which was popular at the same time the Neoclassicism period began to form and reach its peak.

Neoclassicism paintings were very much focused on historical figures and events that existed many years before the actual art period took place. Artists worked to portray various scenes from famous Greek plays or theatrical stories that were popular during the Roman Empire.

The works of the Neoclassicism movement portrayed these stories and figures in a very clear manner that displayed everything in the exact shape and size as the viewer would naturally perceive them.

Romanticism paintings consisted of more bold colors that were often brighter or even darker than they naturally appeared.

Many notable art historians and critics believe that this was done in such a manner so as to portray the underlying sense of emotions that the figures in each painting were experiencing. Romanticism artists often portrayed events or stories in ways that captured the climax of the specific subject matter in a way that communicated a deep level of raw emotion with the viewer.

Instead of the more natural, realistic depictions of the Neoclassicism period, Romanticism artists painted works that were highly subjective.

Some of the most famous Romanticism paintings were more inspirational and aimed toward evoking certain emotions from the viewer, or communicating the emotional state of the figures portrayed in the paintings to the viewer. It was very much a movement that embraced human creativity in relation to the natural world around them.

The Romanticism movement took place at the same relative time frame Neoclassicism did in many parts of Europe.

Various artists of the Romanticism style sought to differentiate themselves from their colleagues by appealing to the more passionate aspects of human existence rather than stories or historical events.

Both art movements represent two methods of presenting artwork and artistic expression that still endures into the modern era.