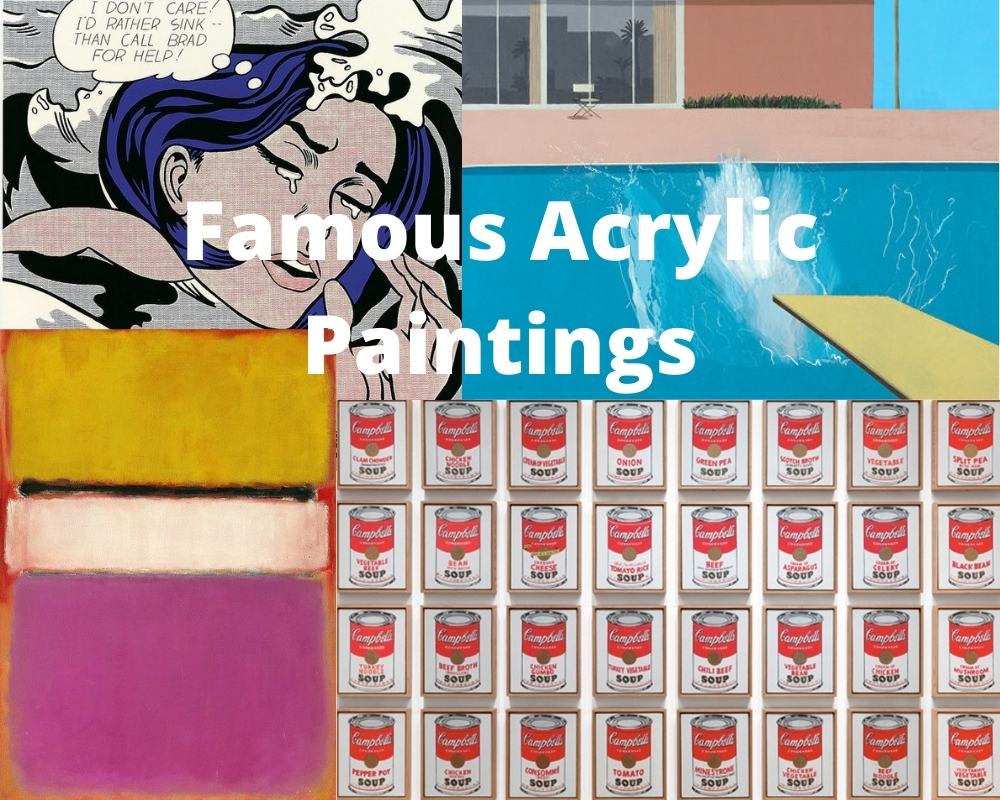 Acrylic painting is one of the most well-known art mediums in history. This type of paint was especially attractive to artists in the mid-twentieth century due to its fast-drying ability and the fact that painters discovered that they could simply do more with acrylic than with older, traditional oil paints.

Unlike oil paint, acrylic is made from pigments suspended in acrylic polymer emulsion, giving a much thicker composition and the ability to dry in a fraction of the time it typically takes oil-based paint. Despite the differences in oil and acrylic, the two are virtually indistinguishable once dried.

For that, and other reasons, many artists began to work in acrylics in the early 1950’s and critics quickly took notice of the striking imagery they were able to create using this newly developed method of painting.

A closer look at some of the most famous acrylic paintings of all time reveals that these artists quickly became masters of this medium and produced works that are still considered among the greatest paintings in modern history.

Among the most famous acrylic painters, there is none perhaps more well-known than American artist Andy Warhol (August 6, 1928 – February 22, 1987). Instead of painting vivid, emotional scenes or landscapes, Warhol instead worked with acrylic paint to bring attention to the contrast and beauty of ordinary items like soup cans, bills, bottles and other various objects.

Created in 1962, Campbell’s Soup Cans, is largely considered to be one of the most famous acrylic works in history. These were a series of paintings in which Warhol brought each particular flavor of soup to life with its own, individual painting—32 in all.

These works were first exhibited on shelves as if they were representations of the everyday soup cans that people widely consumed at that time. Warhol worked to find beauty in the mundane, and is noted as saying of Campbell’s soup, “I used to drink it. I used to have the same lunch every day, for 20 years, I guess, the same thing over and over again.”

This series of paintings caused Warhol’s name to explode across the American art scene and cement him as one of the greatest pop art artists of all time.

He would soon shift into working in the printmaking technique to further explore this theme of portraying common, everyday items in a unique fashion.

British artist David Hockney moved to Los Angeles in the early 1960’s and was immediately captivated by the easy-going culture and the fact that swimming pools were somewhat standard with every home, something that was designated as a luxury by English standards.

His work A Bigger Splash is the third in a series of paintings that feature scenes from swimming pools that capture the sun-lit suburban landscape of southern California. This painting was derived originally from a photograph that Hockney came across while thumbing through a booklet on purchasing swimming pools.

Many art enthusiasts and critics have long been awed with Hockney’s ability to capture the relaxed and contoured nature of California life in this painting. The title and the composition of the work might indicate that one is enjoying a flash of the view a child might have as they approach the diving board to make “a bigger splash.”

American pop artist Roy Lichtenstein created one of the more iconic paintings of the 1960’s with his famed Drowning Girl.

This work was derived from a popular DC Comics book titled Secret Love #83 which depicted a dramatic scene in which the girl is carelessly drowning in front of her lover.

Lichtenstein commented on his excitement in focusing on the highly emotional, yet detached scene of melancholy in this painting. The girl’s dire situation is centered with swirling water surrounding her head as she sinks below the waves.

Lichtenstein’s mastery was in that he managed to capture and expound upon a heart-wrenching moment from something as commercialized as a comic book.

The striking contrast of the work entitled Beginning by American painter Kenneth Noland was an accomplishment in the form of what many consider to be an abstract painting, a style which would grow in popularity in the latter half of the 20th century.

This painting is famed for its ability to draw an intense level of focus from the viewer as the circles in the painting appear to be perfectly round, yet wobbling with movement. The highly contrasting color patterns seems to further drive the energetic nature of this work.

It is unclear whether Noland meant for these circles to be slightly irregular in shape, but the fact remains that this single characteristic brings an extraordinary sense of life to the painting. The searing black exterior around the edge only works to heighten this sense of intensity.

Among the most famous abstract painters in the 20th century, Helen Franethaler created one of the most famous acrylic paintings of all time in a simple, yet deeply colorful painting titled Canyon.

The sharp edges of the blue coloration surrounding the bold red hue in the center in the painting attract a closer consideration that also brings attention to the shifting saturation in the exterior.

Frankenthaler’s ability to display such sweeping changes in colors with this masterpiece speak to the versatility of acrylic paint as a medium.

6. Elegy to the Spanish Republic No. 110 – Robert Motherwell

Robert Motherwell was forever shaped by the Spanish Civil War that broke out shortly after he reached adulthood in 1936. He painted more than 200 works dedicated to the war, among which the most famous is Elegy to the Spanish Republic No. 110.

The painting elicits a similar sense of unavoidable confrontation in the same way a terrible war might have lasting impression on such a young artist.

Motherwell’s intention was to elicit emotion from the viewer and the contrasting light and dark seem to signify death in a very bold fashion.

Motherwell is quoted as saying “After a period of painting them, I discovered Black as one of my subjects—and with black, the contrasting white, a sense of life and death which to me is quite Spanish.

They are essentially the Spanish black of death contrasted with the dazzle of a Matisse-like sunlight.”

Hockney is also famous for his series of giant double portraits that typically feature a man and woman in a somewhat emotional state.

Mr and Mrs Clark and Percy was a notable difference from Hockney’s iconic sun-lit perspectives that mostly featured life in southern California.

Instead, this painting portrays a rather dark scene in which a couple seem to be enjoying the outside view from the dank confines of their home.

Their cat, Percy, appears to be the only one in the image that is solely-focused on the beauty of the outdoors while the two humans are still drawn back into the darkness.

Many art enthusiasts and critics argue that this painting’s intent is to highlight the relationship of Mr and Mrs Clark, which Hockney does with incredible acuity.

Mark Rothko left an impact on the American art scene with his strangely unique works such as White Center (Yellow, Pink and Lavender on Rose).

The painting became famous for its ability to display each one of the vibrant colors as their own single entity, floating apart from one another on the large canvass.

Rothko’s work consisted mainly of similar contemporary works from the 1950’s onward featured paintings that were filled with color.

This one being a work that captures and fully envelops the viewer with each specific color in its own way as the painting was done in a massive size. Each of the colors seem to wax and wane in their own right.

English op art legend Bridget Riley created one of her single-most extraordinary works with Movement in Squares. Her notoriety among artists that played with optical illusions is unsurpassed as she was a true master of creation in this style.

As one of the most well-known acrylic op art pieces, Movement in Squares is a work that makes the viewer somewhat uncomfortable, yet at the same time teases them to continue admiring the undeniable movement before them.

Critics acclaimed this painting for its ability to evoke a reaction out of the viewer as it forcibly plays on our minds’ insistence that everything must be in order.

Riley would go on to later comment that this painting was a product of a simple experimental venture and would develop into something “on the paper that I had not anticipated.”