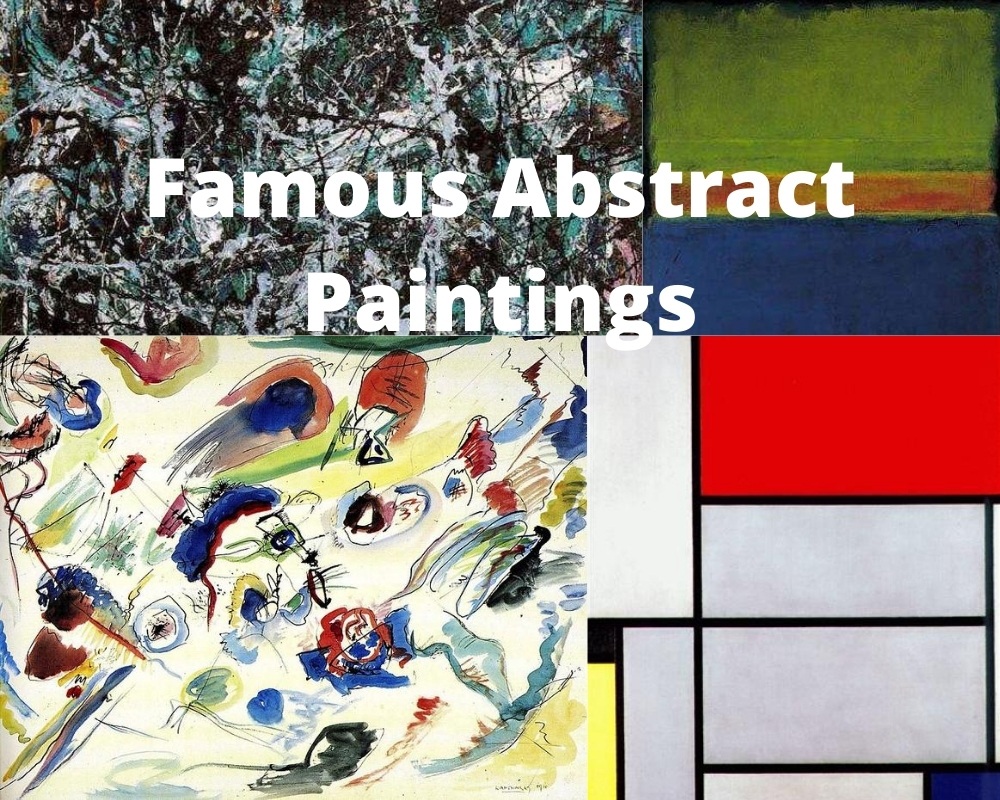 Contained in this list of the most famous Abstract Paintings are some of the most influential pieces that the abstract art movement ever produced.

For many, abstract art can be daunting as often to the untrained eye the artists meaning and intent can be difficult to grasp.

This is largely due to the lack of visual clues that are normally grounded in reality in other types of art.

The early abstract artists were forging a path on new ground and their artworks spanned across many mediums and techniques.

Gone were the safer constraints of more traditional representational art that had shackled artists for centuries and in was a new found sense of boundless freedom.

The following abstract art examples are some of the notable for the genre from some of the biggest names in art.

Untitled(First Abstract Watercolor) was painted in 1910 by Wassily Kandinsky and is considered one of the first true abstract paintings.

Although many artists prior to this work had also begun to think in terms of abstraction, this piece is certainly one of the very first to be shown anywhere publicly and it certainly sparked considerable interest from the masses at the time.

It is in fact a preparatory study for a later work called Composition VII which was later painted in 1913.

Many have heralded it as one of the defining moments in the genesis of the abstract movement, however Kandinsky’s earlier works had already shown strong hints of where the artists was to journey to in his later works.

His work marked a very defined departure from the representational traditions of European art up and to that point in time and an eventual move towards pure abstraction.

It currently resides in the Musée National d’Art Moderne in the Centre Pompidou, Paris, France.

Although he would only live for 44 years Jackson Pollock was to have a profound impact on the world of modern art painting some 363 art works in total.

Made famous for his drip techniques where the canvas would be placed on the floor and then paint dripped onto to it from above.

Pollock would often use cheap wall paint as apposed to expensive oil paints when using this technique as it did not require thinning.

It has a painted black under layer onto which house paint has dripped from above, it also has many ordinary objects such as coins, cigarette butts and a key all of which help to add to the hugely textured top layer that stands out off of the canvas.

It’s name is actually from a line in “The Tempest” by William Shakespeare that a neighbor suggested to Pollock.

Pollock used various different pouring techniques and thickness of the paint to allow him to drip in an almost continuous line for each color rather that broken lines or swirls.

Many have said that the techniques came about by accident but in reality it can be viewed as pure experiment that led to one of the launch of the career of one of the most famous artists ever.

‘Composition II in Red, Blue, and Yellow ‘ is one of Piet Mondrian’s most important abstract paintings as it marked a significant shift away from the artists more traditional after moving from the Netherlands to Paris.

It displays his philosophy that the universe is a naturally harmonious collection of different objects and substances and these could be combined in geometric blocks and defined black lines.

Only primary colors are used in the piece and these emphasize the building blocks of all colors.

The work is now a very famous abstract artwork and it’s image has been used time and time again throughout pop culture.

Ben Nicholson was a largely influenced by the post-impression and cubist movements which were a major departure from his earlier more traditional figurative works.

However he was largely inspired by Mondrian and moved considerably away from painting techniques and representational art to create a series of geometric reliefs that are monochromatic.

It is the all white “White Relief” from 1936 that is said to be his finest abstract piece and has a stunningly quiet air to it.

He also authored a Constructivist manifesto later in life.

Joan Miro is one of the most famous Spanish artists to have ever lived.

His works span many genres such as abstract, surrealism and Fauvism but it is his abstract work that he will be best remembered for.

He name will long be associated with creating some of the greatest Spanish paintings ever produced.

La Mancha Roja or “The Red Spot” in English crosses the boundaries between abstract art and surrealism.

Miro claimed he did nothing more than paint the images he saw in his head and was always hesitant to describe his work as a pure abstract.

The images were often the result of hallucinations from hunger and fatigue rather than drug induced.

Painted in 1952 when Helen Frankenthaler was only 23 years old Mountains and Sea is painted using a soak-stain technique whereby heavily thinned oil paints are used to stain an unprepared canvas.

Unfortunately the staining of the canvas by the thinned paint will eventually lead to the canvas rotting over time.

Mountains and Sea was painted by Frankenthaler following a trip to Nova Scotia the previous summer and her technique is said to have been inspired by a viewing of a some of Jackson Pollock’s black and white paintings in 1951.

The canvas is quite large measuring some seven feet by ten feet which when viewed in person also helps the images to “float” off of the canvas due to the soak stain technique used.

She was also an accomplished print maker and experimented with wood cutting and ceramics.

Mark Rothco was essentially an abstract expressionist painter who’s initial works that were inspired heavily by mythology and philosophy gave way later to works that were based on large portions of colors which were often washed.

These washed canvases often with only three colors on them would become his signature works and his name will always be synonymous with the style.

His work fits squarely into that of a color field painter and although he ever considered himself as one his paintings are routinely used as examples of the genre.

Rothco’s earlier works were full lighter tones but as his age progressed and his mental health declined his color palette moved from light to a mush darker tones.

No 2 Blue Red Green can be seen as a transition between his light and dark phase.

Interchange is one of the first landscape paintings by Dutch-American artist Willem de Kooning.

It is most notable as it is one of the most expensive abstract painting to ever change hands.

In an off market sale David Geffen of Geffen Records sold the piece to billionaire hedge fund manager Kenneth C. Griffin for a reported $300 million in 2015 which was at the time the highest recorded price for any painting in modern times.

It was then only eclipsed by Da Vinci’s Salvator Mundi in 2017.

Prior to this piece de Kooning had focused much of his art on female figures and Interchange was the first major departure into more landscape or architecture based compositions.

Georgia O’Keeffe works have become some of the most discussed and analyzed abstract paintings of all time.

Much to her chagrin the painting was interpreted as a metaphor for female genitalia by art historian Linda Nochlin.

So much so did the artist resent the interpretation that in her subsequent exhibition she submitted an accompanying text that read:

“Well—I made you take time to look at what I saw and when you took time to really notice my flower you hung all your own associations with flowers on my flower and you write about my flower as if I think and see what you think and see of the flower—and I don’t.”

As a female artist he association however has been almost impossible to shake and her abstract artworks will almost always be associated with the female private parts.

Gerhard Richter painted Abstract Painting (726) in 1990 and is a diptych that comprises of two sections of canvas.

The painting consists of horizontal forms that are comprised of most prominently white, red and orange.

Richter throughout his career would after a time go back to older pieces and change them sometimes considerably from the original image.

Abstract Painting (726) is one such piece of art and not only was it dulled down by Richter but the artist also added several vertical scratches.

The result is work that looks like an underlying image that has been blurred and the viewer is left to their ow interpretation to find meaning.

We hope you have enjoyed this list of famous abstract paintings which we will hope enable you to become more familiar with the movement and it’s main artworks.