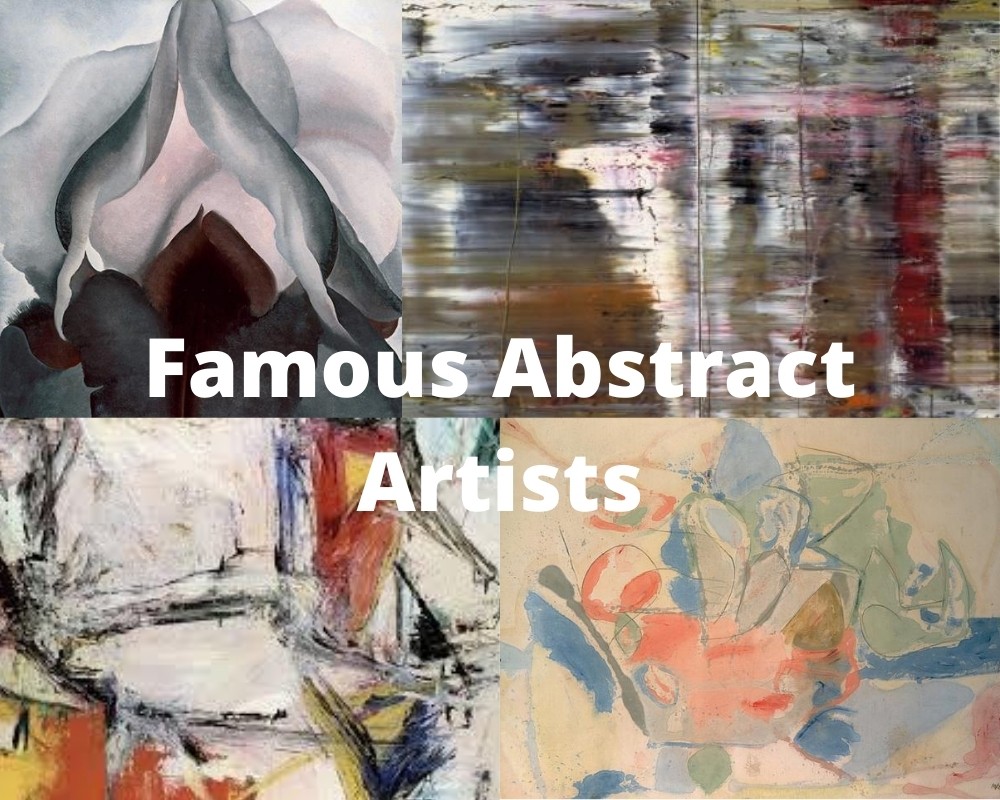 The major names in this list of the most famous Abstract Artists broke stunning new ground in what could be considered as ‘art’ often inventing new techniques along the way.

For the average viewer abstract paintings can often be intimidating, sometimes met with confusion and as they were initially even with rejection.

The abstract artists merged both abstraction and surrealism into the same works and their rejection of more traditional representational art paved the way for what we can now consider what contemporary art is.

As a young man, he went to business school but abandoned that path after suffering a mental breakdown.

Instead, he pursued art and went to art school, having his first solo show in 1918, though it was defaced and ridiculed by his peers. Afterwards, he moved to Paris where he achieved a modestly successful career.

In his later years, the Spanish artist became very prolific until his death in 1983 due to heart failure.

Miro rejected conventional painting which was supported by the bourgeois society. In his adulthood, he developed “automatic drawing” which allowed him to undo his learned techniques.

He had a hard-edge, avant-garde style that has shaped early modern art. He illustrated sexual symbols and is noted for his interest in the unconscious and subconscious mind.

Wassily Kandinsky, a Russian artist born in 1866 Moscow, is known as the Pioneer of Abstract Art. Though he began studying painting at thirty years old after giving up a career in law and economics, Kandinsky excelled in art school, feeling it was easy.

After the Russian Revolution, he helped establish the Art Culture Museum in Moscow and began studying art theory, publishing several theoretical writings throughout his life.

Towards the end of his life, he moved to France where he created his most famous pieces until his death in 1944.

Kandinsky felt a connection between his art and spirituality, leading to his paintings often illustrating biblical stories.

His most famous series Compositions, were meant to evoke a sense of religiousness in the viewer.

Having synesthesia, he drew inspiration from music for many of his paintings, believing music was the greatest teacher, though his style was also heavily influenced by Monet.

Piet Mondrian, born in 1872 Netherlands, was a pioneer of abstract art. His early works were figurative style, but he quickly transitioned to an extreme abstract concept, using only geometric shapes in his paintings.

Most of his works as an adult were paintings of squares and lines with solid colors. Though he didn’t illustrate religious figures, he used the natural and spiritual worlds as inspiration for his paintings.

The son of a painter, Mondrian grew up learning how to draw from his father. As an adult, he became a teacher, pursuing painting on the side until he moved to Paris and altered his name.

It wasn’t until after World War I that he embraced abstract art, leaning into his style of grid paintings.

He continued to paint throughout his life, moving across the world to many different cities, until he died from pneumonia in 1944 New York City.

Jackson Pollock, born in 1912 Wyoming, moved to New York City at eighteen years old to study under Thomas Hart Benton at the Art Students League, though he had little influence on Pollock’s style.

Influenced by Mexican muralists, he was attracted to the experimental workshop of David Alfaro Siqueiros where he was introduced to liquid paint techniques.

He eventually developed this into what is now known as drip technique where he laid canvases horizontally and painted using his whole body at multiple angles. His paintings in this style made him incredibly famous at the time.

At the peak of his fame, Pollock abandoned his use of drip painting, attempting to create a blend of abstraction and figures.

These paintings were extremely unpopular and none of them ever sold. After being plagued with alcoholism throughout his adult life, Pollock died while driving intoxicated in 1956 at the age of forty-four.

Born in the Netherlands in 1904, Willem de Kooning left school at an early age to become an apprentice in a firm of commercial artists.

At twenty-two years old, he traveled as a stowaway on a boat until he eventually made his way to New York City and became a house-painter and carpenter. In 1934, de Kooning joined the Artists Union and began designing murals, but he had to leave because he was not a legal citizen.

Eventually, he received citizenship and opened his own studio where he worked until his death in 1997.

Most of de Kooning’s early adulthood paintings consisted of female figures, though they still use geometric and abstract elements. It wasn’t until his later years that he shifted to abstract imagery.

He also painted using action painting techniques where he would smear paint onto the canvas rather than carefully applying it.

Markus Yakovlevich Rothkowitz, or Mark Rothko, was born in Latvia in 1903, but moved to the United States at a young age. He attended Yale for several years until he dropped out, believing it to be elitist and racist.

After visiting a friend in New York, he began painting and eventually moved to the city. He began exhibiting his works at the Opportunity Gallery and where they were well received.

In the early 1950’s, his works were shown at the Museum of Modern Art and he was recognized in Fortune magazine, leading to many of his personal relationships falling out due to jealousy. During an internationally successful career, he eventually died from suicide in 1970.

At first, Rothko’s paintings were dark and moody expressions. After meeting Milton Avery, however, his paintings took on a rich use of color. Similarly, his subjects evolved from mythological subjects to rectangular patterns of color and shades.

Lucio Fontana was born in 1899 Argentina to the son of a sculptor. During his youth, he worked with his father as a sculptor until he moved to Italy to study under Adolfo Wildt at Accademia di Brera where he presented his first exhibition.

He later returned to Argentina in 1940 to open his own academy based on Spatialism. There, he created five manifestos describing Spatialism as an artistic form. In his later years, he began staging his work in a large number of exhibitions worldwide until his death in 1968.

As the founder of Spatialism, Fontana was endlessly interested in the dimensionality of surfaces.

His early spatial works consisted of holes and cuts on the surface of paintings, often lining the back of the canvas to create depth. His style later changed where he would slather thick paint and then cut large gashes.

Edwin Parker Twombly, known as Cy Twombly, though he distanced himself from abstract expressionism artists, is a highly regarded abstract artist. After being exposed to the New York School early on in his career, he simplified his style, using less figurative aspects in his works.

Drawing inspiration from tribal art, he invoked primitivism in his pieces. He developed his own technique of gestural drawing where he would draw thin lines on a dark canvas to imitate the visualization of scratches.

Born in 1928 Virginia, Twombly studied fine arts at several universities, receiving a scholarship to the Art League of New York. In 1951 he held his first solo exhibition in New York and subsequently received a grant that allowed him to travel Europe.

Upon his return, he joined the military and taught at a junior college after being released. After living with cancer for several years, Twombly eventually died in 2011.

Gerhard Richter was born in 1932 in the Weimar Republic. As a teenager, he left school to apprentice as a stage-set painter and later studied at the Dresden Academy of Fine Arts.

After fleeing to West Germany before the Berlin Wall was erected, he studied under Karl Otto Got. Eventually he became a professor for several years before he moved to Cologne in 1983 where he still lives and continues to work.

Throughout his life, he has declined many private commissions, preferring to be very particular as to which deals he chooses.

In addition to his photo-realistic style, Richter produced abstract works as well. His works exhibit illusionistic space and the material of painting. In these, he would paint cumulative layers on a photorealist image to distort it and create textured grey monochromes.

Since the 1980’s, he changed his technique to using a squeegee to manipulate the paint he applies.

Georgia O’Keeffe, was one of the most famous female artists ever, born in 1887 in Wisconsin, was an esteemed painter recognized as the Mother of American Modernism. At eighteen years old, she studied at the Art institute of Chicago and Art Students League of New York subsequently.

Afterwards, she worked as a commercial illustrator until she discovered Arthur Wesley Dow who dramatically influenced her style and appreciation of painting, causing her to move to New York City to pursue artistry full-time. There, she became known for painting skyscrapers and close-ups of flowers.

O’Keeffe later moved to New Mexico where she opened her own studio, shifting her subjects to those in the mountains of Taos.

After a short period of nervous breakdowns where she stopped all artistic pursuits in the 1930’s, she began painting again, creating some of her most well-known works.

After losing much of her eyesight in her later years, she stopped painting until her death in 1986.

This list of famous abstract artists although not exhaustive does cover the main protagonist of the movement and we hope that it serves as a stepping point for your own research.