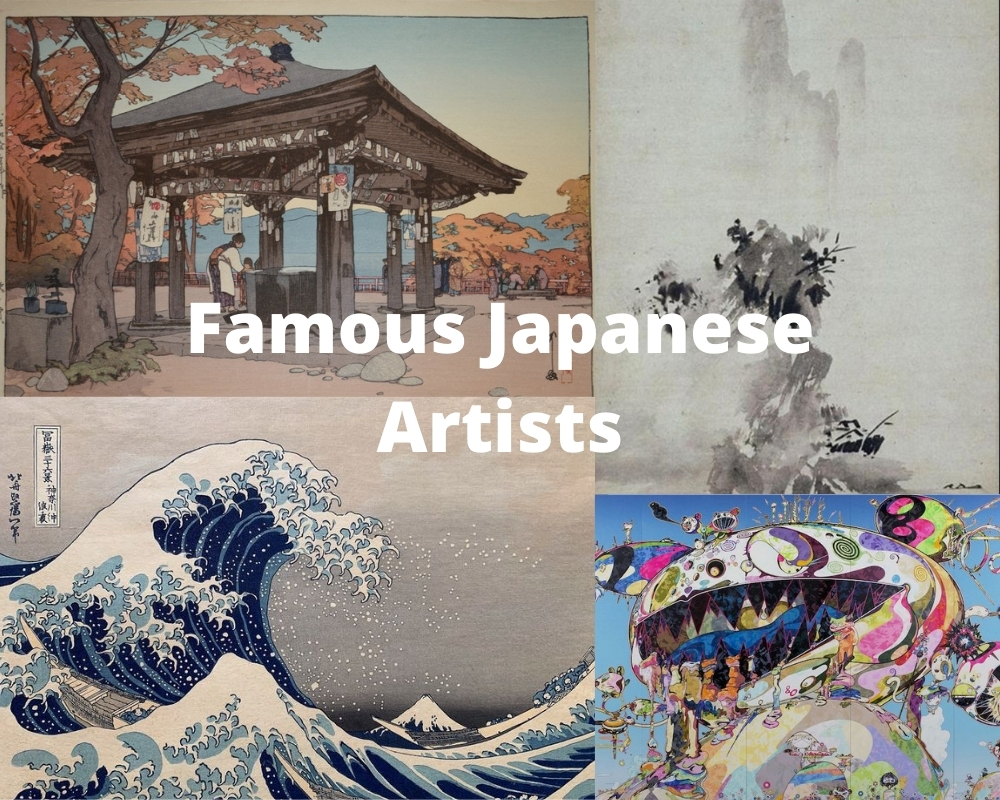 The cultural and feudal history of Japan also had a marked influence on how Japanese art evolved. For many hundreds of years woodblock printing and ink wash painting were the two main techniques.

It was first influenced by China as an outside source in roughly the 16th century and then at a later point in the mid-17th century by the Western world.

Today some of the leading contemporary artists are Japanese and their work spans many genres and styles.

Below are some of the best Japanese painters and artists ever.

Hokusai was born in September 1760 (Treasure calendar 10) in Edo Honsho Wari Sewage. After that, at the age of four, he was adopted by the shogunate mirror master, Ise Nakajima, and spent his time doing sketches.

He became a disciple of a wood carving craftsman at the age of 14 because his hands were dexterous. At the age of 19, he was introduced to Katsukawa Shunsho, a famous actor painter at the time. Soon after, he got the name of Shunro Katsukawa, and at the age of 20, he appeared in the world of ukiyo-e by a fine-sized actor.

However, due to his curious personality, he was not satisfied with the imitation of his teacher, and learned the Kano school and Western-style paintings in secret, and finally excommunicated. That in turn leads to a turbulent life as a painter.

Katsushika Hokusai was one of Japan’s leading artists, and at the same time, the most famous Japanese in the world. As a Japanese artist, he was a masterpiece of prints such as the landscape painting series with the theme of Mt. Fuji and “Hokusai Manga” drawn as a model collection for his disciples.

His work The Great Wave is considered one of the most famous ocean paintings ever produced.

Known for his longevity, which was rare at the time of 90 years old, he completed his life with a paintbrush. After the death of Hokusai, the name spread to Europe. The novel work surprised Impressionist painters such as Van Gogh, Monet, and Degas, and had a great influence on “Japonisme”, which swept the West in the 19th century.

Sesshu, an ink painter who was active during the Muromachi period, is also called “Gakusei,” and is highly regarded not only in Japan but also in China, the birthplace of ink painting. However, there are many people who hear Sesshu and say, “I know the name, but I don’t know much about his life.” Sesshu was born in Bitchū (currently Soja City, Okayama Prefecture) in 1420.

It is said that when he was 10 years old, he was entrusted to the current “Hofukuji Temple” in Okayama Prefecture and began his career as a Zen priest. There is a legend in Hofukuji that Sesshu, who was tied to a pillar by punishment when he was a kid, drew a mouse with tears on his feet.

You can see that he was demonstrating his rich artistic talent from around this time. After that, he discovered his talent for painting and went up to Kyoto to practice at Sokokuji Temple. However, he did not get used to the delicate style of painting that was popular at that time, and moved to Yamaguchi at the age of 34. This choice had a great impact on Sesshu’s life.

Even though, Sesshu has six works certified as national treasures, there are very few documents about Sesshu, probably because he was a person who did not talk much, and much of his life is a mystery.

He was also the first Japanese to be drawn on an overseas stamp, and he is also a great man whose mystery deepens as he knows that he is not an ink painter, as he has created gardens all over Japan.

Eitoku Kano was born on January 13, 1543 in Kyoto. The Kano family is a family of painters, beginning with Masanobu Kano, who served as a painter for the 8th Shogun Ashikaga Yoshimasa (the person who built the Ginkaku) in the 15th century. Eitoku, the great-grandson of the first Masanobu Kano family and the fourth generation, was a thoroughbred blessed with blood and the environment.

He is a representative painter of the Kano school (a painter who was at the center of the Japanese art world from the Muromachi period to the Edo period) and is one of the most prominent painters in the history of Japanese art.

He was loved by his grandfather, the second generation Motonobu, as the hope of the next generation, and at the age of nine, he took him to the general, Yoshiteru Ashikaga. Eitoku Kano, who drew “Jukoin Barrier Painting” at the young age of 23, was loved by Nobunaga Oda for his daring style of painting, and was honored to draw the barrier painting of the castle tower of Azuchi Castle.

Takashi Murakami is a contemporary artist, pop artist, and president of Kaikai Kiki Co., Ltd., born in 1962. I’m from Tokyo University of the Arts.

Once he graduated from high school, Takashi Murakami focused on becoming an animator; something he had wanted to do for a long time. This did not work out for him and he became frustrated.

He then entered Tokyo University of Art as a student. He later graduated with a doctorate degree in Japanese painting. He visited the United States after graduation for a solo art exhibit. It was intriguing to him and so dedicated his life to his creativity and put on his own solo exhibition in Los Angeles, California.

Takeji Fujishima was born October 15, 1867 and was active as a Western-style painter. From the Meiji era to the first half of the Showa era, he was also a major figure who played a leading role in Japanese Western-style painting for a long time.

He has left many romantic styled works of art. He learned Japanese painting from Shijo school painters and Kawabata Gyoku , but later turned to Western painting at the age of 24 (almost no Japanese painting works exist at that time).

He studied under Hisashi Matsuoka and Hosui Yamamoto and in 1896, he was recommended by Kuroda Seiki, an assistant professor at Tokyo Fine Arts School (currently Tokyo University of the Arts) to an art school opened in Hongo Komagome Akimachi. In 1905, the Ministry of Education ordered him to study abroad for four years, and on January 18, he went to Europe, France, and Italy to study.

However, he got into an accident immediately after moving from Paris to Rome, and most of the works of the French era got lost. After returning to Japan on January 21, 1910, he became a professor on May 13, 1910.

Kawanabe Kyosai was the youngest of nine siblings. His childhood name was Katsunosuke. In 1862 (2nd year of Bunkyu), his father died when he was 15 years old and so Katsunosuke took the genpuku, named Kiyochika, that succeeded the family. In 1865 (2nd year of Genji, 1st year of Keio ), he accompanied Iemochi Tokugawa (second Choshu expedition ) and stayed in Osaka .

After the disappearance of the Shogunate, he went down to Shizuoka following Yoshinobu Tokugawa and others. That was December 1870. He stayed there for several years; drawing pictures in his spare time. In 1874, he returned to Tokyo to earn a living.

In 1881, he joined  Kenmon Jinmon  where he expressed himself not only in woodblock prints, but also in newspaper illustrations using lithographs and copperplate prints. In 1894, he opened the “Kiyochika Painting School” (until 1896).

Hiroshi Yoshida (1876-1950) was known as a painter who led the Western art world in the fields of watercolors, oil paintings, and prints from the Meiji era to the Showa era, and was active as a central figure in the Pacific Painting Society.

Hiroshi loved nature and said that there was beauty in nature, and it was the painter’s mission to show that beauty between nature and those who could not see it directly. Most of Hiroshi’s works are landscapes, and his coverage covers not only Japan but also other countries around the world.

In this exhibition, we will introduce about 80 works, including “Fuji Pickup”, which depicts the magnificent view of Mt. Fuji, and “Seto Inland Sea Collection,” which expresses the ever-changing facial expressions of the sea.

Some say that it is Edo, Kawagoe, or Kyoto, but there is a record that he became a student of Toriyama Sekien, a town painter who studied under the Kano school around the age of 18, and its existence is finally confirmed.

He studied painting there and made his debut as an ukiyo-e artist with the title of Toyoaki Kitagawa. Kitagawa is said to be his real name, but there is also a theory that he combined the Kitao school and the Katsukawa school, which were the prestigious ukiyo-e schools. Eventually, he called himself “Utamaro”, but there were various notations such as “Utamaro”, “Utamaro”, and “Utamaro”.

Utamaro, in his twenties, worked on a variety of styles and media, and was devoted to “searching for himself”. At the age of 31, he began to use his surname Kitagawa, and reached the first turning point.

The reason for this was the Kyoka picture book, which was released in seven consecutive works, such as “Kyoka Mushisen,” in which Utamaro added a picture to the Kyoka selected in the open call for participants.

Born in 1539 and died on March 19th, 1610, Hasegawa Tohakuwas a painter from the Azuchi-Momoyama period to the early Edo period. His childhood name was Matashiro. Initially, he was called Nobuharu . Along and he was a representative painter of the Momoyama period.

He became a popular Buddhist painter and posed a threat to the Kano school, which was at the top of the painting stage at that time. Tohaku had extraordinary confidence in his painting skills, but even if he wanted to get a painting job, he was rejected by the Kano school, and it left him feeling very frustrated.

In his later years, he called himself “Sesshu Godai”.  It is believed that Tohaku had been taught painting by Sosei and his grandfather Mugen (Hojun) since his late teens, and since his adoptive family was an avid Nichiren Buddhist believer, he began drawing Buddhist paintings and portraits related to Houka.

Tessai was born on December 19, 7th year of Tenpo. During his training, he was taught Confucianism by Nanko Ohsumi and Yukitaka Kubota. Although the detailed backgrounds of these two people are still unknown, they are believed to have had considerable skill and belonged to the school called the North-South joint school.

This school encourage free style drawing. Tessai was taught by Yamato-e, Rinpa, Ukiyo-e, and Otsu-e. It is certain that this influenced his work until later years.

In addition, there are many celebrities who were fascinated by Tetsusai’s works, including Saneatsu Mushanokoji, Ryuzaburo Umehara, Kazumasa Nakagawa, Shiko Munakata, Hideo Kobayashi, Tetsuzo Tanikawa and other literary figures, painters and critics, as well as Bruno Taut. It is also praised by many foreigners.

However, because Tessai worked in Confucianism throughout his life, he hated to call himself a painter.