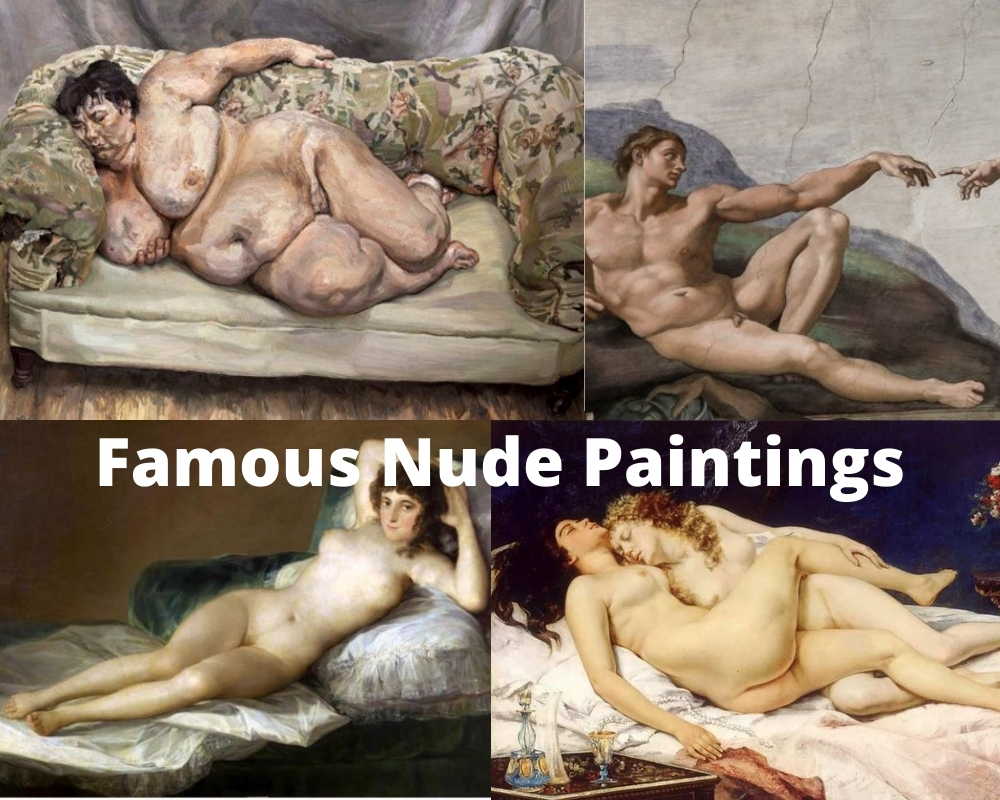 Throughout history, the artists have been fascinated by the human figure and viewed it as one of the most elegantly beautiful subjects one can focus their attention on.

With most of the famous painters up until the 20th century being men, the nude female figure has been a focal point that has consistently spanned many different time periods and art movements.

Some painters have taken the perspective of reverence toward the nude human form, while others have portrayed it in ways that are seemingly erotic—in many cases to a controversial level with artists who lived and worked within heavily religious cultures.

The Italian Renaissance was one specific period in which artists began to explore the nude human form in a more expansive way, but many artists from other areas of the world dabbled in nude paintings before that time period.

Narrowing down a list of the greatest nude paintings of all time can be quite difficult when one takes into account the plethora of highly realistic works from the likes of Michelangelo, Henri Matisse, and Francisco Goya.

In this list, we’ll take a closer look at some of the most famous nude paintings in history and review the artists who painted such masterpieces.

Based on the Greek goddess of love and beauty, this work incorporates a number of other figures and metaphors that create a truly awe-inspiring scene.

Botticelli painted this work in 1485 and it quickly became popular thanks to the iconic nature of the various figures portrayed on the canvas.

Venus is seen entering the world from the winds and ocean, striking a somewhat modest pose compared to some of the more evocative nudes that are featured on our list of the most famous nude paintings of all time.

Many critics point to the landscape and trees as being indicative that this scene is depicted as taking place on the island of Cyprus. The breeze seems to be coming from what appears to be Zephyr, the god of wind, who is accompanied by Aura.

The artist also has added in a young woman who could be Hora of spring, who is seen welcoming Venus into the land with a flowing robe that she appears to be using to cover her nude body in an effort to preserve her modesty.

Edouard Manet’s work titled Olympia took a bold and exotic approach to the nude figure that was somewhat controversial during the time it was painted.

Manet finished his work in 1863 and it was a clear reference to the other famous nude paintings of Titian’s Venus of Urbino and Francisco Goya’s Maja desnuda.

This painting, however, took a more honest approach and depicted a scene that appears to be from the inner rooms of a working brothel, something that was a point of controversy during this time.

The painting shows a young woman posed in the same iconic manner as some of the other most famous nude works of art in history, yet her eyes and facial expression are of a totally different tone. Instead of an inviting look, she has the appearance of apathy as the undoubtedly gazes back at the next man who is to purchase her company for a temporary moment.

This work of art is praised by critics and art enthusiasts alike for its unique and honest glimpse into something that is largely considered taboo in many parts of western civilization.

The next work on our list features one that preceded Manet’s picturesque portrait that was clearly modeled in the same way as this famous painting.

Francisco Goya painted his work titled The Nude Maja in 1800. The painting features a nude woman reclining on a comfortable bed in an almost inviting fashion to the viewer.

The painting’s dark background seems to further illuminate the woman’s nude figure and bring the viewer’s focus onto her exposed body. Maja is a Spanish term meaning a lower-class member of society who is characterized by their flamboyant manner of dress and outgoing demeanor.

The work is considered one of the most famous Spanish paintings of all time as Goya is well-known as a masterful painter in the Romanticism style.

The French artist’s work depicts two women laying nude in bed, which some critics have labeled as a lesbian couple while others have pointed to the possibility that this could simply be two women enjoying a brief moment of one another’s company.

Painted in 1866, the title of Courbet’s work translates in English as “The Sleepers.” Many art enthusiasts have hailed the painting’s high level of realism and the artist’s attention to detail, which was a hallmark of Courbet’s work.

It doesn’t take much of an investigative eye to ascertain the fact that the broken pearl necklace and hairpin scattered on the bed are a clear reference to the nature of the nature of the activity in which these two figures have apparently just engaged in.

5. The Creation of Adam – Michelangelo

Few nude paintings in history are as iconic as Michaelangelo’s work known as The Creation of Adam. This fresco painting is the central piece to the masterful work that adorns the Sistine Chapel ceiling in Italy.

Painted in 1512, The Creation of Adam is still widely praised as one of the most famous works of art in human history.

This particular painting is unique when compared to the others on our list of the most famous nude paintings in history as it depicts two male figures, God and his creation, Adam. Michelangelo manages to preserve a sense of modesty and reverence to the figure of God by placing a robe that covers part of his body while Adam is shown fully exposed.

Klimt was known for painting and drawing female figures in various poses that were considered less than modest in his time and this 1907 work is painted in the same fashion.

Many art critics pose that this figure is a clear reference to a woman who is being or has been seduced by a god, in this instance, most likely the god Jupiter.

Jean-Léon Gérôme is perhaps most famously known for his painting titled Pygmalion and Galatea. This work was done in 1890 and features an interesting scene of a sculpture that is being brought to life—a clear metaphorical reference to the art of sculpture, as well as the tale recounted in Ovid’s Metamorphoses.

This particular work is said to portray Galatea in the act of bringing a sculpture of the goddess Venus to life. The goddess clings to her creator as she takes form from her head down to her feet.

The painting takes a unique perspective as the viewer is unable to view the faces of either figure, which is likely an effort on behalf of Gérôme to further encourage the viewer to focus on each figure in the painting.

John Maler Collier’s painting titled Lady Godiva is easily one of the most famous nude paintings in history as it was once considered one of the greatest works of the 19th century.

This work was done in a rather tasteful way in order to portray one of the most famous legends in English history of a Earl’s wife who was well-known for her piety and generosity towards the common people and peasants.

The painting depicts an act that is recorded in a famous poem by Lord Alfred Tennyson in 1842. This particular work is done in a way that shows the nude figure of Lady Godiva, yet she is somewhat covered by her own hair and the side perspective that hides her most intimate features.

One of the most strangely-unique paintings on our list of the most famous nude works of all time is done by Lucien Freud. Painted in 1995, this work is a rare modern painting that’s included among some of the most iconic works from hundreds of years ago.

Freud painted an unflattering figure of a woman lying on a couch. The woman depicted in the painting was Sue Tilley, an acquaintance of the artist who often modeled for him.

Freud hailed his work as being a painting that focused on the nude female form that was “flesh without muscle and it has developed a different kind of texture through bearing such a weight-bearing thing.”

This work is also historically significant as it is the highest paid price for a painting sold by a living artist ($33.6 million).

Henri Mattise dabbled in a number of different painting styles, but he was perhaps most famous for his ability to paint in the Fauvism genre.

His work titled Nude (Souvenir de Biskra) is quite possibly one of the most well-known paintings of the time period and features the common scene of a nude female figure lounging on a sofa or bedside.

Painted in 1907, this work is widely known for the artist’s use of heavy coloration and vibrant hues to enhance the nude female form that is centralized on the canvas.

This painting was so controversial in its time that it was burned in effigy at one point shortly after being exhibited. Many of this artwork’s harshest critics complained that it should not be shown as the viewer cannot easily discern the race of the nude female depicted in the painting.

We hope you have enjoyed out list of famous nude paintings.