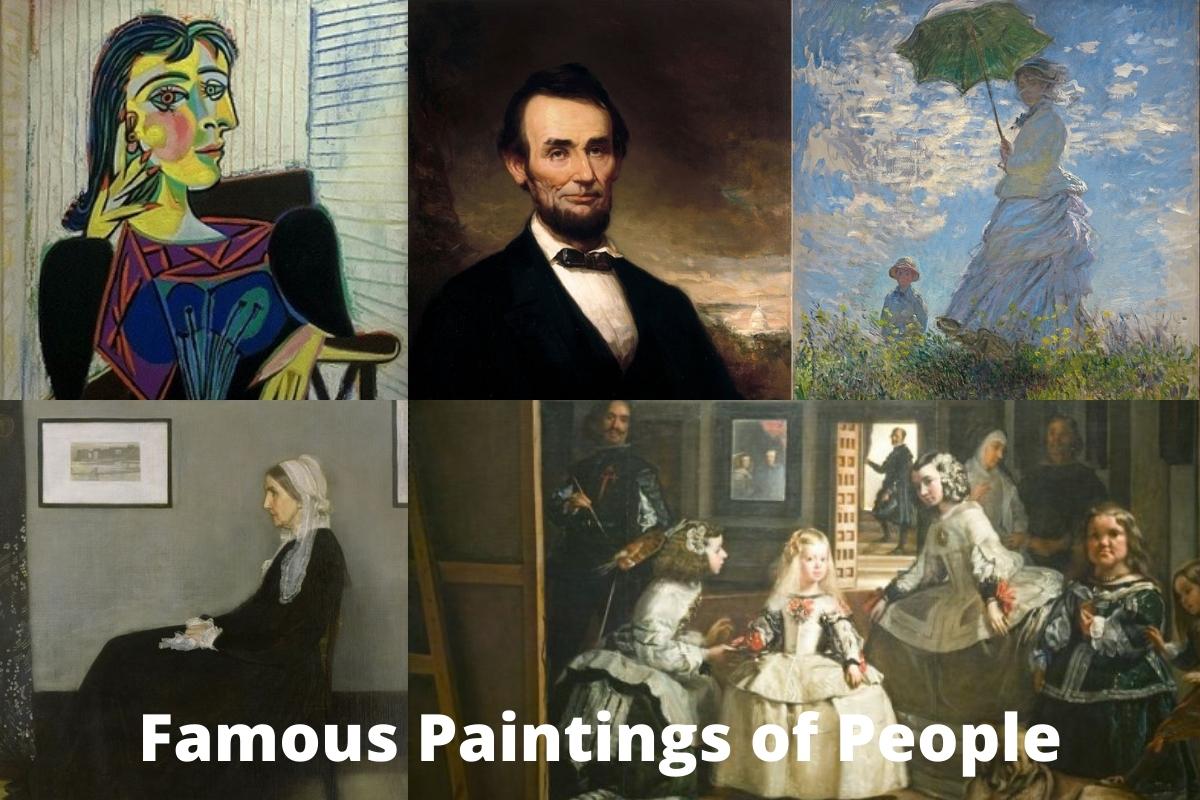 Many of the most prolific painters throughout history, as well as art critics and historians alike, have stated that producing works that focus on people are much more difficult than landscapes or any other type of subject matter.

Despite this challenge, there are some select few painters from history who have greatly excelled in when it comes to painting the human figure.

Portraits are widely considered to be a mark of prominence and royalty throughout most cultures, but some of the most remarkable portrait paintings of people ever done were focused on lesser-known individuals that the artist chose for various reasons.

There are a few notable paintings of people that were done by famous artists which were centered around rulers or very important political or cultural figures from the specific time period.

It’s often tough to assemble a list of the best overall portrait paintings from the many different art movements and eras, but we’ve compiled this list of famous paintings of people as our top choices for this type of artwork.

Leonardo da Vinci is, without question, one of the most highly-regarded figures from any period in the world of art. He was a renown painter, as well as a prolific inventor, sculptor, and he also possessed various other talents that combined to be the origin of the phrase ‘renaissance man.’

Without question Da Vinci’s most famous artwork is arguably the Mona Lisa, but many scholars and critics debate this assumption as he produced many notable works that have stood the test of time and remained among the most impressive paintings ever done.

The Mona Lisa was completed in the early 16th century with many historians putting the exact date sometime around 1506. The woman in the portrait is as much of a mystery as any figure in the world of art as nobody really knows the true identity and status she held in Italy at the time.

It is posited by many art critics and historians that her name was Lisa Gherardini, who is thought to be a noblewoman who was either a lover or acquaintance of da Vinci.

The artist’s pure mastery of the human form is on full display in this work as the Mona Lisa’s characteristics and assets seem to stand out and capture the viewer’s attention in a way that no other painting does.

Her eyes have a strange ability to seemingly follow the viewer no matter which angle one looks at the painting from, but Lisa’s hands are what many art critics see as an incredible portrayal.

George Henry Story was famous for his landscapes and other genres of paintings during the mid-to-late 19th century, but he did have a notable ability to depict the human form in exquisite realism compared to other portrait artists of this period.

The American painter was well-known during his lifetime as an artist who was equally talented in both landscapes and paintings of people.

His most famous work focused on the 16th President of the United States, Abraham Lincoln.

Story traveled to Washington, D.C. during Lincoln’s presidency with the purpose of capturing enough details about the controversial political figure that he would be able to create a respectable painting at a later date, which would become known as Portrait of Abraham Lincoln.

For at least three days, Story sat in the Oval Office with Lincoln for a number of hours, watching him intently as he examined various documents and strategized some of the more important aspects of the nation.

It was a volatile time in American politics as the southern states had started a rebellion that would grow into a full-blown war by year’s end. Story drew Lincoln from various angles and returned to his studio weeks later to produce this work.

Napoleon Bonaparte was one of the most notable and iconic figures in history who once led a sprawling empire of military might that stretched from the western edge of Europe into the border with Russian territory.

Jacques-Louis David is remembered as one of the most celebrated artists from the Neoclassical era who created numerous works that centered around prominent political and cultural figures.

David is best known for his series of paintings that focused on Napoleon, which he began in 1801. The works were aimed at commemorating Napoleon’s famous overland march across the Alps, which is one of the most treacherous mountain ranges in the world.

The leader managed to lead his soldiers across the narrow passes around the snow-capped peaks to reinforce his troops that were stationed in Italy at the time.

The move was seen as one of the most daring and brilliant military strategies in recent memory at the time and David was commissioned with painting a few works that celebrated this accomplishment.

The most notable painting from the series depicts Napoleon mounted on horseback and pointing towards the high mountains ahead. This work would later be gifted as part of the treaty between Napoleon and Charles IV of Spain.

James McNeill Whistler was regarded as one of the most famous American painters throughout the 19th century.

He commonly produced outstanding works of art that captured what life was truly like for Americans during this time period as many of them were forced to work very hard to survive in a growing and emerging nation.

His most famous work, however, is one that centrally focuses on his own mother. This painting is simply referred to as Whistler’s Mother and was done in 1871.

The woman is seated in the painting and is seen by the viewer from the side in a very unique pose that has since become an iconic work from American history.

The painting’s dark undertones along with his mother’s solemn disposition seem to indicate that she was in a state of mourning at the time when Whistler painted the work.

5. Woman with a Parasol – Madam Monet and her Son – Claude Monet

Claude Monet is remembered as one of the founding members of the Impressionist movement, which is widely considered to be one of the most influential art eras in history.

He is best known for his distinct style of blending vibrant colors with the illumination of the sun’s brightness in ways that few other artists could match. In his paintings, Claude Monet often focused on subjects that were very familiar to him, which often included his family.

He created a work in 1875 that is titled Woman with a Parasol – Madam Monet and her Son. Many art scholars and critics view this piece of artwork as one of the most famous paintings of people as it has a pure, intimate nature that indicates how Monet viewed his family.

The focus of the painting was Monet’s own wife, Camille, and his son, Jean, who was a young boy at the time. The child is seen in the background, gazing back towards the viewer, as is Monet’s wife, who has a pleasant, inviting expression on her face as she looks back at Monet.

Another notable painting that depicted one of the most well-known figures in American history was done by Rembrandt Peale.

Named after the famous Dutch artist Rembrandt Harmenszoon van Rijn, Peale was brought up with a close affinity for the arts and a gifted ability to create realistic portraits. One of his most recognized works featured Thomas Jefferson.

Painted in 1800, Peale’s depiction of Jefferson is considered one of the most iconic portraits of a United States president ever created. The artist finished the work at a time when the fledgling nation had still not yet fully formed in both governance, as well as the territory it would later inhabit across the North American continent.

The image of Jefferson is portrayed as one that is described as stately and charismatic, which were two traits that President Jefferson would be remembered as having.

Pablo Picasso is a name that’s synonymous with the arts in many ways. He is recognized as one of the most gifted painters that worked in movements such as Cubism, Surrealism, and others.

Hundreds of Picasso’s paintings centered around the human form, but uniquely his were quite unlike any other portrayal that other artists had done before him.

One such painting is titled Portrait of Dora Maar and was completed in 1937. This simple, yet elegant portrait features one of Picasso’s close acquaintances, Dora Markovic, who was a talented photographer that sometimes produced work under the name Dora Maar.

The painting features Picasso’s classic pointed edges and bold linear elements that brought his subjects to light in a vastly different way than his peers.

Gustav Klimt was an artist that created various works which focused on the human form in different lighting and poses.

The Austrian-born painter was well-known for producing captivating works of mostly women that were adorned in golden apparel that seemed otherworldly to some.

One such work garnered praise from many critics at the time and is considered by many to be Klimt’s most famous painting from his career.

Titled Portrait of Adele Bloch-Bauer I, this work was started in 1903, but Klimt would take his time on such a masterpiece, finally finishing in 1907. The work received rave reviews from art lovers and critics when it was first exhibited and was totally unique from anything else at the time.

The painting was commissioned by a wealthy banker and the subject of the work is the man’s wife, Madam Bloch-Bauer.

Like many other works done by Klimt, she is adorned in a sprawling golden dress that centers the viewer’s gaze on the woman’s delicate features in a way that seems to highlight them.

Diego Velázquez enjoyed a close relationship with King Philip IV of Spain during his reign in the 17th century. The artist was commonly commissioned to paint various portraits and other works that featured the royal family and other prominent figures engaged in various activities that were common among the ruling family during this era.

One of his most well-known paintings depicts the family in a somewhat intimate way that few artists were allowed to see, much less portray on the canvas.

Titled Las Meninas, this work would end up being one that defined Velázquez and his celebrated career as one of Spain’s most beloved painters.

The work was done on a massive canvas and features the king and queen, who are somewhat hidden in the background, along with their children and the royal family’s closest servants.

The young princess is being fitted for a beautiful dress that is carefully designed by a seamstress in front of a mirror.

Dutch painter Johannes Vermeer had an exceptional ability to portray the human figure in an incredibly realistic manner.

His style and unique depictions were unlike any other painter from the 17th century and one work in particular is viewed as his most famous painting, as well as one of the most recognizable works that involve elements of realism and vibrant color.

Known as Girl with a Pearl Earring, this painting was created in 1665 and is one that’s easily recognized among art scholars, critics, as well as even casual viewers.

The painting features the upper portion of a beautiful young woman in which the viewer can only see her shoulders and above.

Instead of simply presenting the viewer with her profile, the young woman gazes over intently with a somewhat inquisitive expression.

The contrast between light and darkness, as well as the subtle blends of colors are part of what makes this portrait one of the most well-known from history.