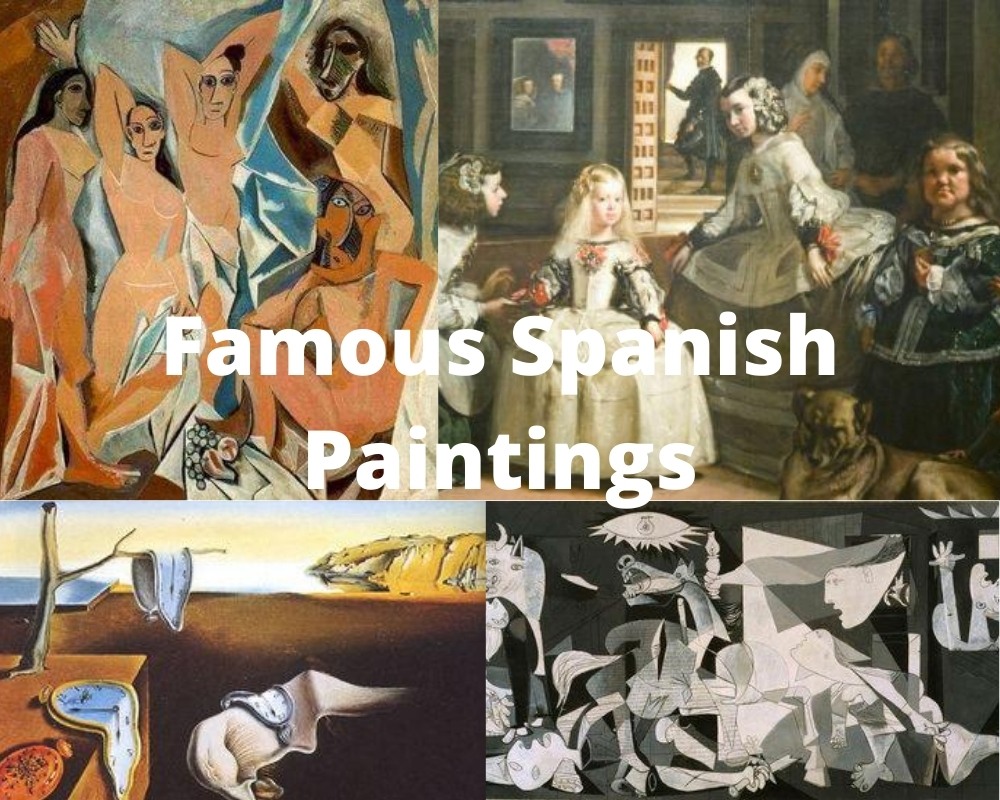 The contribution of Spanish paintings throughout the art world cannot be underestimated.

Whilst French artists were largely responsible for the impressionism movement it is the Spanish had a very significant contribution to the Cubist and the Surrealist movements.

Names such as Picasso, Dali and Goya regularly feature in famous artists lists the world over.

One of the largest pieces of art that Pablo Picasso would complete throughout his lifetime Guernica is also one of the most famous Spanish paintings ever produced.

Picasso painted Guernica as an anti-war protest against the shocking bombing of the town of Guernica in the Basque Country of Northern Spain by Nazi German and Fascist Italian forces at the request of the Spanish Nationalists during the Spanish Civil War.

Displayed initially at the Paris International Exposition in 1937, it was commissioned by the Spanish Republican government.

The painting was later sent on a world tour to help raise funds for the Spanish war relief.

It helped to draw massive attention to the civil war in Spain.

A giant tapestry of Guernica hangs in the United Nations building in New York.

At the time Picasso was living in Paris and would never return to Spain before his death in 1973.

He is widely considered the most famous Spanish Artist ever and his art routinely fetches record highs at auction.

2. The Persistence of Memory

One of the most iconic images ever Salvador Dali’s mind bending The Persistence of Memory has been reproduced countless times of posters and prints.

Dali painted the piece in 1931 and it has since become the defining painting of the surrealist art movement.

The image in question is said to be one of the first pieces that Dali painted in which he used his ‘paranoid-critical’ technique where after experiencing self-induced hallucinations the artist would project his own phobias into the canvas.

Of which he famously said  “The difference between a madman and me,” he said, “is that I am not mad.”

He would subsequently use the imagery of melting watches several times in later works.

The Persistence of Memory was anonymously donated to the Museum of Modern Art in New York in 1934 where it continues to hang to this day.

To the modern eye Las Meninas may not look like that extraordinary yet at the time it was one of the most revolutionary pieces of art of it’s day.

Diego Velazquez painted Las Meninas in 1656 and it was a major departure from more traditional royal portraiture.

The portraits of the day would previously only have featured members of the royal family and in such works there was considerably more structure and the hierarchy as to placement of each of the members.

Las Meninas however strongly breaks with tradition and features not oly a nun, dwarf and princess but also the artist himself.

At the time Velazquez held the position of palace chamberlain in the Spanish royal court, a position which would allow him considerable leeway in comparison to other artists of the day.

In 1807, Napoleon struck an alliance with the king of Spain Charles IV in an attempt to conquer Portugal.

As a result the French army massed into Spain en route to Portugal.

However, the Spanish soon realized it was a trick on Napoleon’s part and his real intention was to conquer Spain too.

On May 2, 1808 hundreds of Spanish nationals rebelled in Madrid. By the 3rd of May they had been rounded up and were executed by the French and the streets of Madrid ran red with their blood.

Francisco Goya honored his fallen countrymen with two paintings that depict each day.

The Second of May, 1808 is a classic battle scene of charging horses and twisted bodies.

The Third of May, 1808 in Madrid however is considered one of the most famous paintings in the world as it is thought of as the first truly modern painting.

The reason for this is that it transforms Christian iconography and is a clear portrayal of man’s inhumanity to man.

A poor laborer takes the position of Christ in the center of the image as he sacrifices himself for his country.

On closer inspection there is even a stigmata that is clearly visible on his right hand.

It is said to have influenced Picasso when he painted Guernica featured above.

One of Picasso’s most striking Cubist paintings Les Demoisselles D’Avignon depicts a group of prostitutes from the Avignon street in Barcelona which was famous for it’s brothels and the amount of artists that it attracted.

In earlier preparatory works for the piece the figure on the left was originally a young man who is just about to enter the brothel, however Picasso subsequently revered this decision as he though a male influence would interrupt the narrative of the imagery.

The painting was said to be shocking when it was first viewed and the Cubist style combined with three of the naked women gazing out directly at the viewer was deemed to be highly confrontational for the day.

It was a major departure from the more traditional styles of paintings that many French artists of the day had been producing.

Picasso was heavily influenced by “Primitive” art and in particular African masks which is strongly evidenced by the large almond shaped eyes of each of the women.

Picasso was only 25 years old when he painted Les Demoisselles D’Avignon whilst living and working in a cramped studio in Paris.

6. The Burial of the Count of Orgaz

El Greco was one of the most famous Renaissance artists of his day and one of the few non Italian artists of the day to achieve massive fame for his works.

Like most Renaissance paintings of the time The Burial of the Count of Orgaz was commissioned by the church and it adorns the Santo Tome church in Toledo, Spain.

The scene is said to depict the internment of the Count of Orgaz and which during this ceremony the heavens erupted and the sky was filled with larger than life images of Jesus, the Virgin and many other saints and angels.

Francisco Goya live in a house called “la Quinta del Sordo” and he decorated it with many murals on the walls.

Some of these murals are known to belong to the artists series known as the “Black Paintings” as he used a very large proportion of black pigment throughout the murals.

In 1873 the Baron Émile d´Erlanger acquired “la Quinta” and set about having the murals transferred to canvases.

Unfortunately during the transfer process a lot of the paint on the murals were damaged, after which the Baron choose to transfer the canvases to the Prado museum where they have been on permanent display since 1889.

Saturn is the Romanized name of the Greek Titan Chronus who feared he would be overthrown by his children.

Upon their birth Cronus is said to have eaten every one of his children, however his wife hid his third child(Jupiter) from him, Jupiter would eventually supplant his father and fulfill the prophecy.

Picasso spent much of his life in abject poverty and during this time he is said to have found a great affinity with the poor and downtrodden of the world.

The Old Guitarist was painted in 1903 at a time when Picasso himself is said to be almost penniless whilst living in Barcelona.

The painting was painted during his ‘Blue’ period when almost every canvas was painted in a dull monochrome palette of blue, a color that suited the type of subject matter that he would cover.

The guitar is a break in the muted almost flat, two dimensional forms that the monochrome blue creates, whilst the guitarist looks bent over and depressed.

Subsequent X-rays of the painting have revealed that there is a ghostly character(a woman) that Picasso had initially started to paint but changed his mind and decided to paint over.

After the first world war came to an end just like thousands of other hopeful artists Juan Miro arrived in Paris in 1920.

The farm was to become one of his most best known paintings and one of the most famous Spanish paintings ever.

The artist described it as somewhat of a turning point in his career, remarking upon it as “a summary of my entire life in the countryside” and “the summary of one period of my work, but also the point of departure for what was to follow.”

Miro had a strong affinity with the countryside as he grew up on a small Spanish farm or “masia”(traditional Catalan farmhouse).

The painting depicts ever aspect of country life and life on a farm.

It was painted at a time when cubism was all the rage and initially Miro struggled to find a buyer.

It was later donated to the National Gallery of Art in Washington DC in 1987 by Mary Hemingway wife of Ernest Hemingway of whom which Miro was a friend.

During 1906 Juan Gris traveled to Paris where he met Georges Braque and Pablo Picasso.

Gris would become hugely involved with Picasso in developing the new Cubist style that was all the rage.

Picasso took Gris under his wing and became a mentor of sorts.

In the image of Portrait of Picasso he paints Picasso in a larger than life setting with his body taking up almost all of the available space on the canvas.

Interestingly Juan Gris unlike most Cubist of the time would use a variety of colors in his paintings, whereas other artists would use a limited palette to attain a more monochrome look for all of their art works.

Although this list of famous Spanish paintings is not exhaustive it does capture some of the greatest artworks from Spain with each piece telling a story far more important than the image on the canvas.