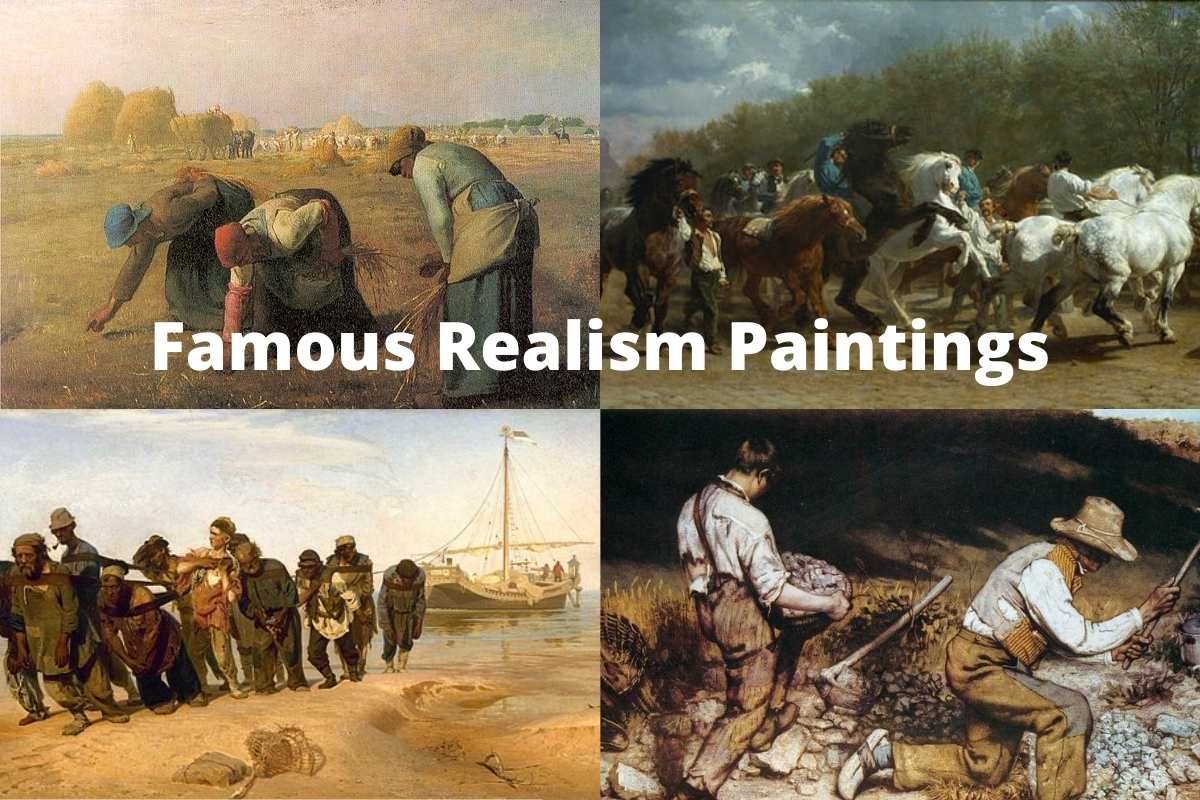 One of the most iconic art styles in history is known as Realism.

The movement began around 1850 after many of the artists during this period sought to portray life as it really was instead of embellishing scenes and events in a way that distorted reality.

Realism painting allowed artists to largely center their works around things that had previously been neglected by other art styles and genres.

With many Realism artists viewing their work as a method to inform the general public about various circumstances and societal shifts that would otherwise not be brought to light.

They were renowned for their ability to portray the world as it truly was, even though many art critics at the time saw their paintings as crude and containing a sense of raw, rugged accuracy that was often undesirable to look at.

Realism was a subtle, but direct departure from Romanticism, which was the art movement that preceded it.

Instead of painting scenes and figures in a way that glorified life as it was in Europe during this time, they used their talents to bring the public’s attention to various truths that would later help to bring about change in some areas of society.

There is no denying that this art style is one of the most interesting and fascinating movements in history. Here are 10 of the most famous realism paintings ever created.

Realist painters often portrayed life as it was for the everyday person in French society where the movement truly took hold. Jean-Francois Millet was best known for his ability to depict normal people engaged in everyday activities like working, chores, or even enjoying leisure time with one another.

His painting titled The Gleaners is a work that perhaps best encapsulates everything about the Realism movement in one single painting on canvas.

This 1857 painting is one of a series of three works that focuses on peasant women going about their daily business—in this case, they are gleaning, or gathering leftover crops that are considered scraps left behind by those who were doing the initial harvest.

This painting shows what is widely considered to be the lowest rank of French society and Millet’s work was widely criticized by some art critics at the time as it portrayed the opposite of what many in the art scene viewed as worthy of their scrutiny and attention.

The bland colors of the painting seem to reflect the mundane nature of the lives of these three peasant women. It was works like these that brought the Realism movement into the full attention of the public sphere as many aristocratic French citizens were largely unfamiliar with the hardships that the average person had to endure.

The Realism movement spanned more than a hundred years, yet the overall theme of this style of painting remained very much unchanged for the most part. Edward Hopper is perhaps best known for his painting titled Nighthawks, which is considered to be one of the most recognizable American paintings ever done.

Created in 1942, this work depicts a scene that was typical of inner city America during the 1940’s. It was a time when industrialization had transformed life for everyone in the developed world and Hopper’s painting is a representation of the effects of the rapid changes brought on by modern life.

This painting portrays three patrons sitting around a late-night cafe with one waiter engaged in his usual work. The sharp contrast of the glass and the brightly-lit interior of the cafe against the dark, dull street corner outside was an accurate comparison of how inner city life crammed people closer together, yet they had never been farther apart from a social standpoint.

One of the most famous names of the Realism movement was Edouard Manet. His paintings largely focused on life in French society during this time, but he was also especially fond of the female form.

His 1863 work titled Olympia merged both interests together in a way that is celebrated as one of the greatest realist paintings in history.

The work depicts a woman, who art historians believe to be a prostitute, lounging on an open bed in a way that is almost inviting the viewer to join her.

This painting also includes a maid who is a stark contrast to the nude woman in many different ways, including their skin color and the fact that one is clothed in work attire and the other, nude.

Ilya Repin is viewed as being responsible for establishing the movement in the country of Russia during the latter half of the 19th century.

He is one of the more famous proponents of social realism which was an effort to highlight the daily struggles of the common worker.

Repin’s painting titled Barge Haulers on the Volga is representative of his efforts to bring into focus the plight of the common sailor and dock worker in the popular port cities along the Volga River during this time.

Painted in 1873, this work was one that Repin created after he had spent many months sitting by the Volga River, watching the ships and boats pass by as the workers aboard each vessel toiled vigorously on their decks.

He is also known for his paintings depicting these workers engaged in their after-work leisure activities that included drinking and gamesmanship that Repin saw as a unique and special sense of camaraderie among the workers.

Jean-Francois Millet is one of the founding members of the Realism movement. His works tell the stories of so many French peasants in a way that shined a light on their lives to the world around them, notably the French aristocracy who were aliens to such hard work as was common to French people of lower social status.

His work titled The Angelus was painted in 1859 and depicts bowing to say ‘The Angelus’ prayer after a hard day’s work in the fields. The work was originally titled Prayer for the Potato Crop, but was later changed. It is considered to be one of the most iconic paintings from the Realism movement.

The mid-1800’s were a time in which many medical advancements helped pave the way toward innovations that truly changed the world.

Thomas Eakins had a fascination with medicine at this time and his 1875 work titled The Gross Clinic is a snapshot in history from one of the world’s leading medical institutes during this time.

This painting depicts Samuel D. Gross, one of the leading surgeons in the world, engaged in an instructional surgery with some of his students at Jefferson Medical College in Philadelphia.

The work was viewed with a high level of scrutiny for its somewhat grotesque nature, but is a testament to the overall theme of truth and reality that is rooted in the Realism movement.

The mid-20th century was a time in which polio ravaged many people throughout the United States. Many art historians believe the central figure of Andrew Wyeth’s painting titled Christina’s World is one of the many people who lived with this crippling condition that had no cure at this time.

Done in 1948, Wyeth’s painting features a female figure sitting in the tall grass of a hillside near what appears to be a lone farmhouse on the open prairie. Many art historians believe the girl is an acquaintance of Wyeth by the name of Anna Christina Olson, who actually suffered from a degenerative muscular disorder that left her unable to walk.

The scene is one that shows the girl possibly crawling to her house in the distance—a grim reality that life for those who suffered from polio were forced to deal with.

Rosa Bonheur is widely considered one of the most famous female artists in recent modern art history. Her works were mainly focused on animals and she is credited with producing one of the most iconic Realism paintings in her piece titled The Horse Fair.

The particular setting of this painting depicts the horse fair that took place at Boulevard de l’Hopital in Paris. Women were rarely ever in attendance at such events and Bonheur dressed herself as a man in order to avoid drawing unwanted attention while she viewed the procession of the fair.

The painting garnered widespread fame and was hailed for the immaculate details on both horses and riders depicted in the work.

Gustave Courbet received quite a bit of backlash from art enthusiasts and critics in 1850 after he exhibited his work titled The Stone Breakers at the Paris Salon.

This single painting is viewed as having a major role in sparking the Realism movement in France and Europe as it was a clear departure from the long-held tradition of painting scenes and figures in a way that revered the upper class and various activities that were common to those among the aristocratic class.

The painting shows two stone workers, their backs turned to the viewer, engaged in the unforgiving task of breaking large stones down to usable gravel.

This was an especially rugged occupation and many of the French upper class saw the work as a crude depiction of peasant life that was unworthy of the attention of the Parisian upper class who were totally unfamiliar with the practice of manual labor.

Courbet is believed to have painted the work to draw attention to the hardships that many French peasants were yoked with at the time while the rich aristocracy enjoyed a vastly different existence.

Among the most famous Realism paintings ever done is Whistler’s Mother, which was produced by James McNeill Whistler in 1871.

This painting is especially bleak and solemn at first glance, but art critics and historians the world over are fascinated at his ability to portray his own mother, Anna McNeill Whistler, in an extremely high level of detail and composition.

It is not clear as to the circumstances surrounding the painting and whether the woman is in mourning or simply adorned with a modest, black dress that was common for the time period.

The unique image of the woman posing sitting in profile against a dark wall and covered window is considered one of the most iconic paintings of the Realism era.

It is dubbed by many as the ‘American Mona Lisa’ as it contains much of the same level of mystery and mastery as Da Vinci’s famous masterpiece.