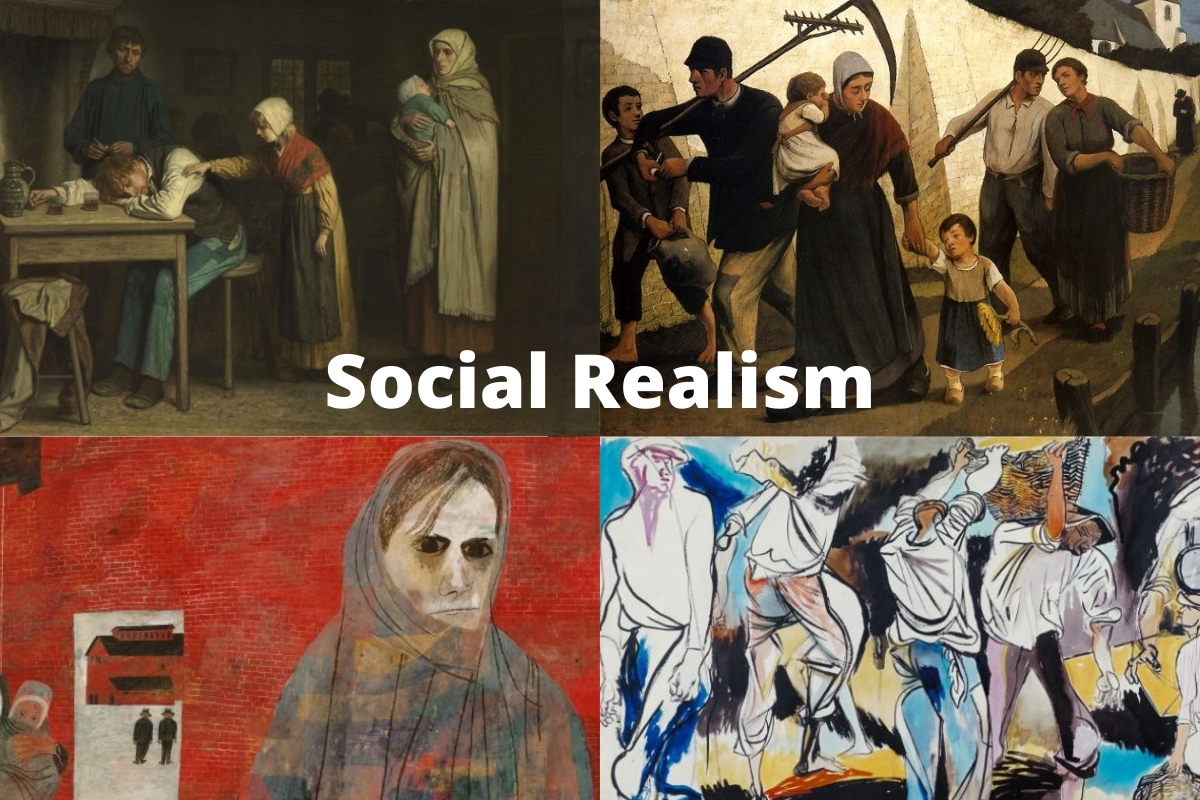 Around the end of the 19th century, many parts of the developing world were seeing a greater expansion in the spaces between specific social classes that was brought on by evolving power structures and the newly industrialized world that was taking shape.

Artists sought to bring much of the harsh realities the world was beginning to face in the form of an art movement known as social realism.

What is Social Realism ?

Social Realism is an art movement that drew attention to socio-political realities of the working class while critiquing the ruling classes between WW1 and WW2.

The movement was largely defined as a style of art that spanned across many mediums including painting, photography, film, writing, and other means that fully displayed the stark realities in differences between the bustling upper class and the struggling lower, working class portion of society.

Throughout countries in Europe and other parts of the world, including the United States, a growing number of people were living at or well-below the poverty line despite the fact that many of them worked almost non-stop throughout their lives.

In cities across the United States during the late 1800’s and early 1900’s, the many new methods of producing various goods through manufacturing were giving birth to more and more poverty-stricken neighborhoods of workers that were needed to run massive factories and operations.

It was quite common in many parts of the developed world to see young children working all-day shifts in some form or another to do their part and try to support their poor families.

Artists increasingly began to take notice of the ugly, dirty truth that accompanied the fact that growth in some of the world’s most powerful nations and their economies had failed to improve the lives of most of its citizens.

The social realism movement artists began to capture the scenes of the world around them and portray life as it really was.

Evolution of Realism into Social Realism

The movement stemmed from European Realism that was widely popular throughout the 19th century. Many European realism paintings depicted scenes from around the continent that showed some of the more attractive landscapes, cities, and social structures of the day.

Many art historians point to European realism as an art movement that took shape after artists blended some characteristics from Romanticism and historical painting.

Also Read: What is Socialist Realism

The overall movement of realism art took shape in different forms. A group of Russian artists known as the Wanderers began to focus on natural scenes while artists across France and England would increasingly center their works around various social settings and activities.

A group of realist artists formed in 1900 and founded a loosely-organized society that would later become known as the Ashcan School. Famous American painter and educator Robert Henri is credited as being the leader of the Ashcan School.

The group is known for their efforts to paint, photograph, and etchings the bustling city and streets of New York during a time when industrialization had begun to totally change life for many of the people living there.

Many of the realism artists are believed to have had political implications in their works that truly underline the origin of social realism and its overall purpose.

It is said that Henri wanted art to closely resemble journalism in its ability to capture and tell a particular story or send a message of some sort.

His and other artists from the Ashcan School would go on to produce works that were gut wrenching for some upper class Americans to view.

It was difficult for many wealthy people in the United States and elsewhere in the world to see the true nature of New York, as well as other cities that were being transformed by rapid industrialization and the overworking of everyday citizens and their families.

Henri urged his students and followers that were associated with the Ashcan School to paint everyday Americans in their common life activities in the same way that famous artists of the French realism movement had done.

Many of the most notable works from the Ashcan School were done during the first decade of the 20th century and focused on people who spent most of their time in the streets of American cities.

In most cases, these streets were particularly dirty and grungy, which was what many of the social realist artists wanted to shed light on to the rest of the country and the world as a whole.

An art style and movement that mostly focused on the dark, gritty scenes that most painters and other artists might shy away from started to take shape a few decades into the 20th century.

The artists of the Ashcan School had successfully developed a style that gripped the attention of American society and raised awareness of the living conditions and social hierarchies that were once hidden from view in large part.

Robert Henri is known as one of the founding members of American social realism. His works were some of the most notable in the early stages of the social realism movement.

Henri was devoted to teaching young students the importance of turning away from academic methods of artistic development and instead encouraged young artists to take to the streets—quite literally—in an effort to capture what the world around them was truly like.

John French Sloan was at one time a student of Henri and began his career as a newspaper artist in Philadelphia. He followed Henri to New York City where he devoted himself to painting various scenes that he experienced in and around the city.

His most famous paintings included Sunday, Women Drying Their Hair (1912); McSorley’s Bar (1912); and Backyards, Greenwich Village (1914). His paintings drew on the sympathetic views of the hardships and realities that working men and women were forced to live with.

Social realism was also led by famed painter George Bellows who was a native of Ohio, but moved to New York in the early part of the 20th century to study under Henri. He is known for having a uniquely vibrant, yet dark manner of portraying various parts of city life for most common New Yorkers.

His most well-known works center around children playing in a public pool in a work titled Forty-Two Kids (1907) and people clustered around a raucous boxing match in Stag at Sharkeys, which was painted in 1909.

George Luks is another prominent founding member of the social realism movement in America and painted many works that are associated with the movement. He was born in a coal-mining region of Pennsylvania and would travel the world during his youth, visiting cities like Paris, London, and parts of Germany.

He later settled in Greenwich Village, which was a section of New York City that was known to have an especially vibrant culture. He painted works like THe Spielers and The Wrestlers in 1905 and was famous for his ability to capture particularly colorful scenes involving common social activities and gatherings.

The Depression Era and Development of Social Realism

Later in the latter portion of the 1920’s the United States was stricken with an economic collapse known as the Great Depression.

This period saw many hardworking farmers and other members of society forced into living in an almost primitive manner as food and jobs were scarce throughout much of the country, even in the once-booming cities of the Eastern portion of America.

Artists that were already working within the social realism movement used their sense of connection to the realities of social life to portray the period and its people in a way that is raw and unaltered—much like journalists and reporters for the many newspapers that operated during this time.

Many works that come from this period focus on the stark realities that come with jobless lives for many Americans.

While people were forced to make harsh decisions and even uproot themselves from their homes and move to other parts of the country, some artists were able to get the attention of political figures and the American people as a whole through their unyielding approach to truthful art.

The federal government of the United States commissioned many artists in using their talents to better their communities and the nation in some form or another.

Through such organizations as the Works Progress Administration and the Public Works Art Project, many artists were commissioned to paint murals and to also decorate public buildings in a way that highlighted the hardworking nature of the American spirit, or at least inspire people to forge their way through one of the hardest times in the country’s history.

Over time, the social realism movement would continue to evolve, but the overarching theme that many of its founding members devoted themselves to would remain intact. Many modern artists, as well as critics and art lovers, slowly began to appreciate the nature of social realism and its purpose.

Through much of the 20th century, social realism was the roots for various efforts in photography and film to capture life as it truly is for many people in the United States, and the world as a whole.

The ability of the artist to paint or otherwise depict a scene that invokes consciousness to various socio-political realities and ideals has an incredible ability to reach people in a way that other mediums simply fail to do.

The ability of art in the social realism realm to serve as a beautiful form of protest is undeniable. The art style began as a means to shine the light on various parts of society that many, more wealthy groups and social classes would likely rather remain hidden from view.

It served as a means to critique the systems of power behind the political movements and ideology and force people to come to grips with certain truths that might otherwise never be addressed.