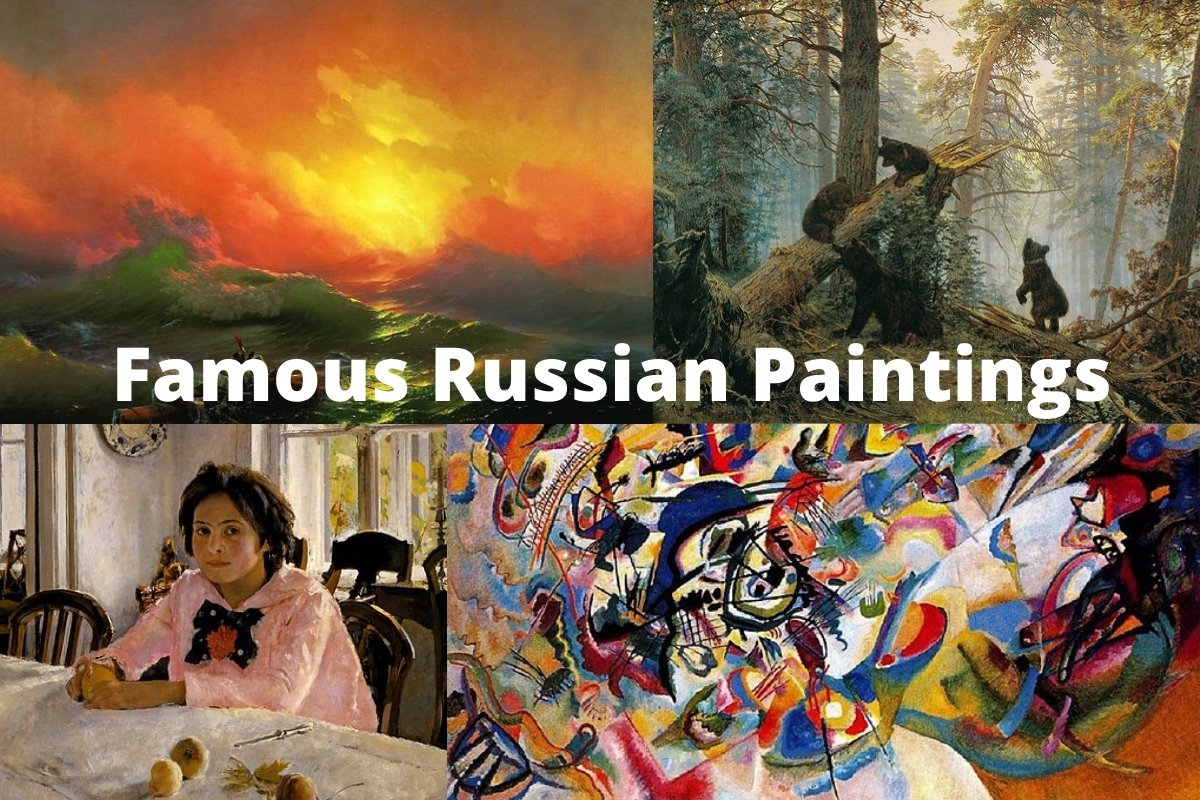 Russian culture has been one that is as rich as any in the world when it comes to various forms of artwork, especially painting. Many Russian painters are quite well known to other cultures and have been famous for centuries.

One of the most prevalent forms of painting in Russian culture was Realism, which dominated the art scene throughout much of the sprawling country for many years.

Russian paintings have a style all their own as many artists sought to portray the country’s distinctive cultural differences in a variety of forms.

The nation’s landscapes are among the most beautiful in the world and artists from every corner of the Asian continent worked to paint scenes that were as realistic as possible in many cases.

Russian arts have long been focused on everyday scenes and people, particularly of the everyday conditions of working class Russians for quite some time.

Many of the Russian artists featured here are famous the world over for their abilities and works—many of which were known for their incredible levels of realism.

Here are the 10 most famous Russian paintings ever done.

One of the most famous abstract paintings in Russian culture and the world over is Wassily Kandinsky’s work titled Composition VII.

Kandinsky is regarded as one of the most famous Russian artists to have ever lived.

This painting is one that was created in a time when artists began to delve into many different areas of abstract visual expression.

Kandinsky’s painting was done in 1913 and quickly became known throughout Russia, as well as much of Europe for its unique color combination and kaleidoscope-like appearance.

The work was instantly famous for its strange, yet striking coloration, as well as the various shapes that were arranged across the canvas by the artist.

Kandinsky’s early career revolved around the study of law and economics. Only later in life would he study art and begin painting works that were considered abstract in nature.

Kandinsky was somewhat of a Russian renaissance man who was as widely known for his written works as he was for his paintings.

He has long been known as the “Father of Abstract Art” as he was one of the first painters who truly explored the abstract form of expression in a new style that was quite unlike any other the world had ever seen until that point.

Known for painting scenes that revolve around seafaring life and sailing, Ivan Aivazovsky produced one of the most recognized and famous works of any Russian artist in his work titled The Ninth Wave.

The artist had spent most of his life at sea and his paintings of the ocean would largely reflect his passion for the sea in all its different forms.

The Ninth Wave was painted in 1850 and portrays a scene in which three sailors are lost at sea, floating on a beam from a wrecked ship. The work drew considerable attention from critics and enthusiasts inside Russia, as well as throughout the world at the time.

The painting’s title and focus is said to come from a commonly-held belief that many sailors have of a cycle of waves that come in a series of nine different waves, the ninth being the largest and most destructive.

Despite the beautiful sunset, the sailors are clinging on to the beam for dear life, hoping to be able to withstand the beating that the waves will undoubtedly have on them during the night.

The unimaginable scenes of the eruption of Mount Vesuvius have captured the world’s imagination for centuries.

Karl Briullov sought to portray what he believed to be the final moments of the city of Pompeii would have looked like in his work titled The Last Day of Pompeii.

This painting was done sometime between 1830 and 1833 and has long been known as one of the most famous Russian paintings ever created.

The work emerged during a time when Neoclassicism had begun to wane and the emergence of Romanticism was on the rise.

Briullov’s painting depicted the people of Pompeii in a final moment of terror as the volcanic mountain erupts with a level of fury the known world had never seen before.

Many Russian art critics and enthusiasts praised the work for its incredible amount of realism and detail, as well as the artist’s ability to capture such a scene of sheer terror in a seemingly beautiful manner.

The painting immediately drew a considerable amount of attention for the artist’ incredible ability to capture such a realistic-looking scene.

It is a prime example of socialist realism art.

The painting would quickly become famous throughout all of Russia and has since been praised as one of the most famous works of art in the country’s history.

Repin drew inspiration for this particular work as he walked alongside the shores of the Neva River one day years earlier. He noticed a group of boatmen, exhausted from the day’s toiling, lugging a boat to shore and preparing to rest after their hard work.

Repin sought to portray the men in the height of their work on the river in such a way that would somewhat glorify their efforts.

Many other Russian artists painted similar scenes of workers engaged in their toil and the idea of bringing to light the hardships and difficulties of the working class became popular among Russian painters during this time.

Realism was one of the most important and popular styles in Russian art culture in the last few centuries.

Artists from all over the Asian country drew inspiration from scenes of everyday life and worked to paint them in a manner that brought them to life like no other art styles had done before.

Valentin Serov created one of the most well-known paintings in1887 that was considered a pillar of the Realism movement.

His painting titled Girl with Peaches features a young girl seated at a table while the sunlight pours into the room behind her.

The colors and the manner in which the light plays on each minute detail of the painting make the work appear almost as realistic as a photograph.

The artist went to great lengths to paint the subtle ways in which the sunlight both illuminated that room and cast shadows across parts of the scene on the canvas.

6. The Rooks Have Come Back – Aleksey Savrasov

The Russian landscape, for much of each year, is gripped with brutally cold temperatures and many blankets of snow throughout much of the country.

Russian artist Aleksey Savrasov painted a scene that captures the end of the icy winter season in his 1871 work titled The Rooks Have Come Back.

The artist sought to portray a small, but monumental instance in the Russian landscape that points to the end of the long winter and the subtle beginning of spring as the rooks have finally returned to their roosts from the warmer southern climate.

The painting is one that has long been examined in Russian schools as children are often made to write essays based on their impression of the painting.

One of the more famous modern paintings that have been produced in Russia is Marc Chagall’s work titled La Mariee.

The painting was done in 1950 and portrays a scene from a traditional Russian wedding in which a young bride is adorned in a vibrant red dress and holds a bouquet of flowers in her hand as she awaits her groom.

The painting is famous for its strange, but curious use of perspective and composition as the woman and other figures in the painting seem to be stretched upward and in a diagonal angle.

The bright colors of the bride’s dress are further emphasized by the darkened background that is a dark blue color which virtually blends into the night sky.

One of the most unique paintings in Russian culture is also perhaps one of the most well-known. The Black Square is a work that was done by Kazmir Malevich and features a simple, black square that is painted on a linen.

Malevich painted the first version of this work in 1915 and would later create other versions that were done in the 1920’s and 1930’s.

Forensic technology reveals that the painting was actually done over a much more colorful and complex composition.

Art critics and enthusiasts have viewed this particular work with mixed reviews, many of them noting its standing as one of the seminal works of modern art.

Russia has long been a nation with Christian theological origins dating back to the 10th century or earlier. Andrei Rublev created one of the most iconic religious paintings the world has seen in his painting known as Trinity.

This painting was done in 1425 and is recognized as one of the most famous Russian paintings ever created.

Rublev painted many different Christian scenes and various images that harken back to the earliest teachings of Orthodox Christianity.

This particular painting depicts the Holy Trinity, which is made up of God, Jesus, and the Holy Spirit. This work is also one of the most recognized Christian paintings ever done.

Ivan Shishkin was a member of a group of artists known as the Peredvizhniki, who are also called The Wanderers. This group was known for its staunch protest against academic regulations that prohibited the study of certain subjects in Tsarist Russia.

He painted a work known as Morning in a Pine Forest in 1889 that would later become one of the most famous Russian paintings of all time.

Shishkin and other landscape artists during this time period were captivated by the rugged beauty of the Russian wilderness and many of them sought to depict the natural beauty of their home country with as much realism as they could.

Many art enthusiasts and critics alike have praised Shishkin for his immaculate realism, most notably in the trees that he painted.

This work and others by the artist that focus on landscapes across Russia are some of the most beloved works ever done by a Russian artist.