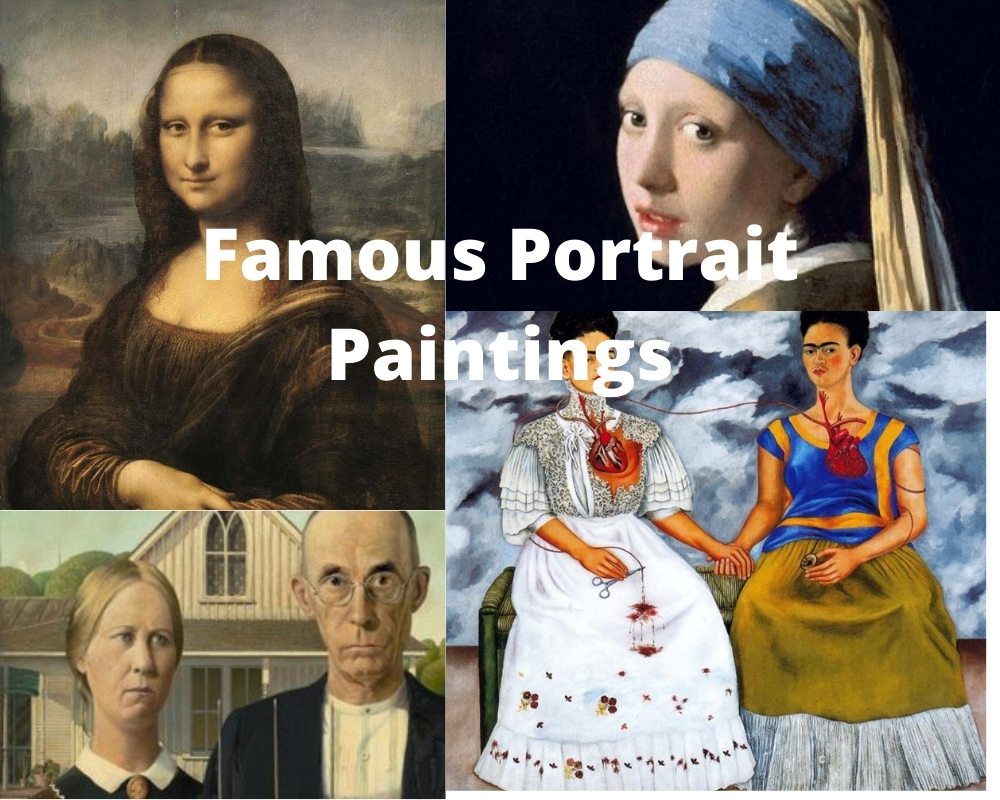 Portrait painting is widely considered to be the most difficult form of painting as it requires a keen acuity for portraying the human form in an extreme level of detail.

Portraits are focused on one or more human subjects with most of the emphasis being placed on the upper portion of the body. Some of the most famous painters in history had a unique ability to capture the essence of human emotion in a single portrait.

Many artists have studied human anatomy to an extensive degree, working to understand the nuances in each little minute change of expression.

There have been portrait artists from all over the globe who have honed their painting skills in an effort to perfect the art of portraiture, including names like Leonardo da Vinci and Rembrandt.

Here are 10 of the most famous portrait paintings ever done.

The Mona Lisa is one of the most famous paintings ever and is easily the most notable work done by Renaissance artist Leonardo da Vinci in the portraiture genre. The painting is also known as the Portrait of Lisa Gherardini and was painted sometime between 1503 and 1519 in Florence, Italy.

Da Vinci painted the work in oil on wood paneling and it is widely known for the extreme level of detail, as well as the curious expression upon the subject’s face.

Many art critics and enthusiasts find it especially curious as to the woman’s identity while also noting that her eyes seem to have an uncanny ability to follow the viewer no matter where they are standing.

Perhaps the most notable element of the Mona Lisa, at least among accomplished artists who know full well the difficulty in painting realistic images, is the high level of detail in the woman’s hands, which appear to be lifelike to the point that they could almost be a photograph.

The Mona Lisa now remains inside the Louvre Museum in Paris, France and draws huge multitudes of art lovers to its location each year to view it in person.

2. The Girl with the Pearl Earing – Vermeer

One of the most famous portraits of all time was painted in 1665 by Dutch artist Johannes Vermeer. The painting was done in oil and features a young girl who is gazing back at the viewer with a captivating expression that elicits curiosity from all who have the pleasure of seeing this work.

The painting is well known for its amazing level of realism and the manner in which Vermeer is able to capture the subtle variations between light and dark.

Art critics and enthusiasts remark that the girl’s eyes are one of the most interesting parts of the work as they are fixed on the viewer in a way that is both playful and anticipatory.

The girl’s beauty and features are further brought into the central focus as the background surrounding her presence is a solid black abyss.

This painting is widely considered Vermeer’s greatest accomplishment and has long been known as one of the greatest portrait paintings of all time.

At the time it was done, Diego Velázquez’ work titled Las Meninas earned the reputation for being one of the most beautiful works of art to come from 17th century Spain. Velázquez’ work features five-year-old Margarita Teresa, who was the famous daughter of King Philip IV of Spain and Mariana of Austria.

The painting contains a stunning level of detail that offers a glimpse into Velázquez and his intention of leaving no aspect overlooked throughout the entire gigantic canvas that was a whopping 10’5” x 9’1” in size.

Velázquez incorporates himself into the painting as well in the dark recess of the left side of the canvass, almost inconspicuously looking on in an elegant, unseen moment in the royal palace.

While Mariana is the clear central focus of the work, one element of the portrait is that the viewer seems to share the same vantage point as the king and queen as they can be seen in the reflection of a small mirror in the background.

Legendary Mexican artist Freda Kahlo is famous for her paintings that capture the essence of the country’s indigenous past along with the ever-increasing European influence of the early 1900’s.

Kahlo’s work titled The Two Fridas is a strange, but thought provoking depiction of the dual nature among the very society she and other Mexicans live in during this time. The painting was done in 1939 and portrays two versions of Kahlo that are seated in an elegant, but perplexing fashion.

On the left, the viewer sees a depiction of Kahlo that is wearing a stylistic dress of European design that was common among the upper-class individuals of Mexico during this time and also served as a symbol of wealth and affluence.

The Kahlo that is shown on the right is garbed in a much more traditional Mexican dress that offers quite a bit more color that the bright white dress worn by her opposite.

The portrait is said to depict a clear contrast between a country that is torn apart by the incoming European influence of the day while still clinging on to the essence of Mexican heritage. We clearly see where Kahlo’s heart lies as her European-dressed version is depicted with a bursting heart while the Frida on the right shows a heart that is alive and well.

Few portraits among the most famous paintings of all time offer as much exuberant coloration and symbolism as Gustav Klimt’s painting titled Portrait of Adele Bloch-Bauer I.

The work was completed in 1907 and features the wife of Ferdinand Bloch-Bauer, who was a well-known businessman during early 20th century Austria.

The painting was also known as The Woman of Gold due to its high level of gold tones throughout the painting that are seemingly overwhelming to many art enthusiasts and critics. The work offers a wide variety of different ways in which light plays upon the surface of gold with its various characteristics of shimmers and shines.

This work gained an added level of fame and notoriety after it was stolen by the Germans during World War II. Years later, the family of Adele fought against the Austrian government in court to regain rights to the painting.

Among the most famous portrait paintings in American history, as well as the world is James McNeill Whistler’s work, Whistler’s Mother. Painted in 1871, the work shows the artists mother, who is captured in a state of mourning as she is depicted wearing all black and having a somber expression on her aging face.

The painting is known for the artist’s ability to portray such a deep sense of emotion through a side profile of his subject, in this case, his mother.

The work features various levels of darkness ranging from light grey to deep black. Many art critics note that the painting offers a unique level of realism that is seldom portrayed in such a bleak, melancholy fashion.

John Singer Sargent was an American artist that gained fame for his extremely realistic works during the latter half of the 19th century. His work titled Portrait of Madame X captured the hearts of art lovers throughout the world through its delicate beauty, but many officials and critics of the day commented that the work was far too provocative to be so highly-esteemed in 1884 France.

Sargent painted the portrait to feature his fellow expatriate Virginie Amélie Avegno Gautreau, who was the wife of a successful banker in France. The work incited an uproar among the conservative members of French society at this time—even forcing Sargent to flee the country and take refuge in London.

Since then, art critics and enthusiasts have carefully observed the painting and recognize it for the incredible level of realism, as well as the artist’s ability to portray such a beautiful woman as the central focus despite having such an overwhelming amount of darkness surrounding her figure.

Known as one of the most famous portraits in history that features a married couple, Jan van Eyck’s work titled The Arnolfini Portrait was completed in 1434 as an oil painting on a wooden panel, which was quite popular during this time.

The painting is well-known for having a high level of detail and acuity down to the most minute part. The work is believed to be portraying an Italian merchant couple inside their affluent home.

The husband is seen with a pious expression as he gently grasps his pregnant wife’s hand. Van Eyck was able to layer the painting in a way that brought deep levels of varying tones and colors that captures the attention of the viewer.

The artist’s ability to capture the couple in a way that appears to be perfectly depicting the different levels of dimensions as both the man and his wife have a remarkable level of realism that extends deep into the background.

There are few portraits that are historically famous for their quality, as well as their subject. Juan Gris’ work titled Portrait of Pablo Picasso is one such work as it portrays the legendary Spanish painter in a laid-back pose that offers the viewer a tantalizing image that incorporates deepening levels of color and light contrast.

Finished in 1912, this painting is considered one of the most famous from Gris, who is said to have been close friends with Picasso.

The painting’s delicate geometric shapes bring an interesting level of attention to the various levels of light and how the darkness fades into different elements to create a relaxed image of the famous painter.

Grant Wood’s painting American Gothic is known as one of the most iconic pieces of American artwork as it features two solemn figures standing in front of a modest farmhouse.

Painted in 1930, the work is an obvious testimony to the harshness that the United States’ people were forced to endure during the Great Depression of the 1920’s. It is a perfect example of Social Realism art. Wood’s painting shows a uniquely designed house that offered what Wood viewed as a Gothic-style architectural appearance.

After developing drawings of the house, wood used his dentist and his sister as a solemn father and daughter standing diligently in front of their farmhouse.

The work echoes the hardworking American spirit that the country’s people took great pride in. Wood’s work was an instant classic and has since become one of the most iconic pieces of artwork in American culture.

We hope you have enjoyed out list of famous portrait paintings!