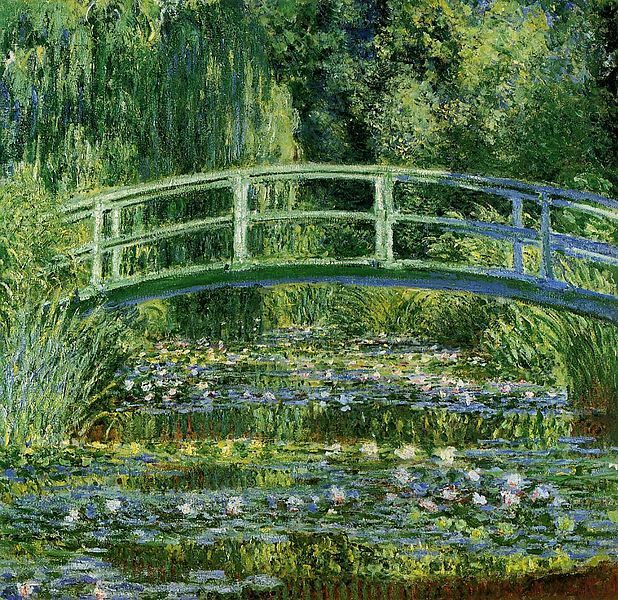 The Water Lilies and Japanese Bridge was painted by Claude Monet sometime between between 1897 and 1899.

There were times in Monet’s life like most artists where he struggled financially.

Like most impressionist Monet’s earlier work was not well received by the established Parisian critics of the day.

However, by the mid-1890’s the impressionist movement had become established and so too had Monet as one of it’s brightest stars.

With this new found fame also came considerable wealth and for the first time in his life Claude Monet was financially secure.

He has been living at his house in Giverny as a tenant for several years, and his success as an artist had now allowed him to purchase the house out right and allow him to develop the gardens with a huge array of colorful flowers and it’s focal point the lily pond.

The pond was actually on a plot of land that was purchased separately to the house and Monet had to apply to the local council for planning consent to develop what was a marshy field into the magnificently structured and manicured gardens that we can still see to this day.

Man of his canvases are in a more traditional landscape orientation with very few being painted in portrait orientation.

The shape of the canvas allowed Monet to create a real sense of depth as the viewer is drawn into the image with the Japanese bridge being the focal point.

The Water Lilies and Japanese Bridge is actually one of a series of paintings, of the sixteen canvases that were planned only 12 were brought to completion.

Unlike The Artist’s Garden at Giverny which was a single painting Monet would paint many series of the exact same scene in an effort to capture the different lighting conditions at various times of the day or season and also in varying weather conditions.

Throughout his career Monet had spent considerable time painting en plein air in the fields surrounding his home in Giverny and in his beloved garden.

However due to the quickly changing light conditions he would start many paintings in the outdoors only to call a halt once the light had changed.

Monet would then either finish them in his studio or attempt to find the same light conditions on a subsequent day.

Most paintings by Monet would be painted using this method and he could work several paintings throughout the day for no more than an hour each.

He would often have ten to twenty canvases transported to the location to compare them to the light conditions on the day and then choosing the one that best matched.

His series of haystacks is one such example where his assistant had to transport multiple unfinished canvases in a wheel barrow out to the field to see if they matched the prevailing light on the day.

In his garden however things were a lot simpler and the artist had a much greater sense of control over the garden than when out in the surrounding fields.

Like most famous impressionist paintings the use of color and the relationship to light is one of the most important aspects of Monet’s canvases.

The Water Lilies and Japanese Bridge is a culmination of of both his talents as an artist and and as a gardener.