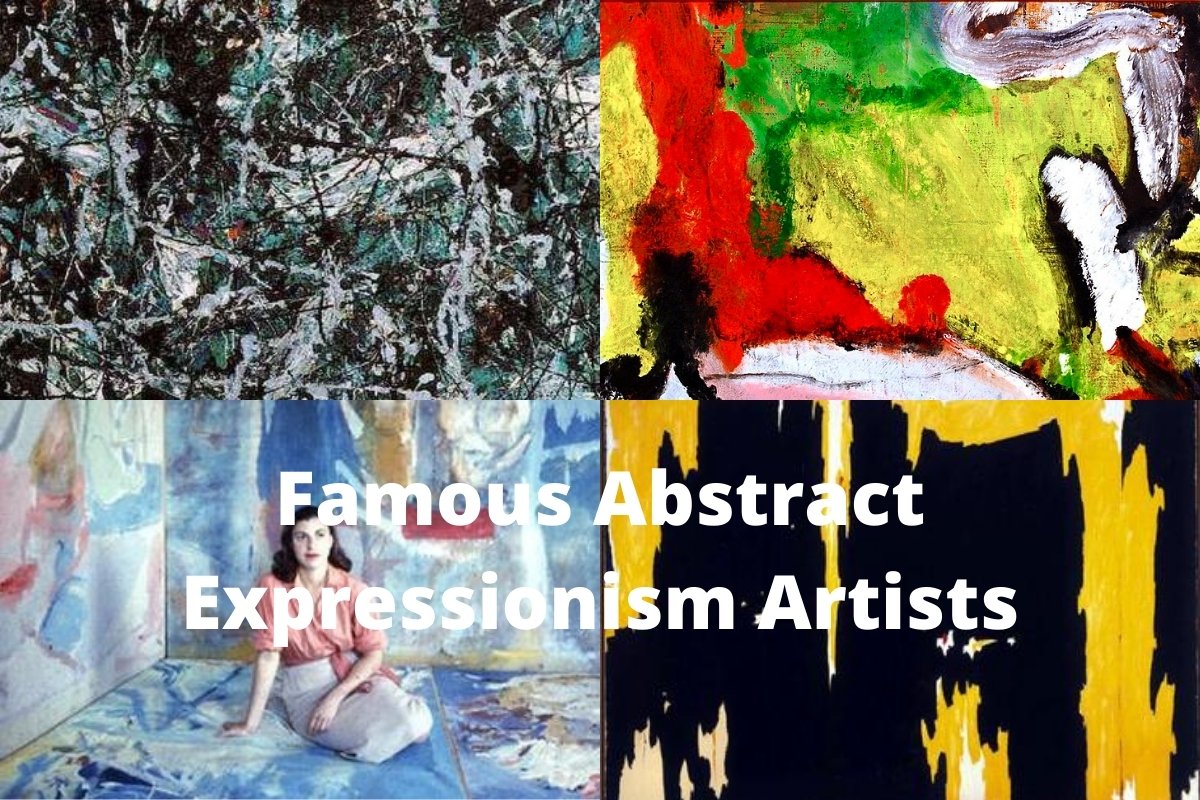 Abstract Expressionism is one of the most peculiar art movements to have come out of the many different modern-day schools of artistic thought and expression. The movement began to spring up out of societal changes that coincided with the final weeks and months of World War II.

This time was one in which people from all over the world were beginning to welcome the newfound sense of peace after years of the most deadly and destructive worldwide event that had ever taken place.

The artists who also emerged during this time period were largely influenced by the world events that had just transpired only a few years prior.

The artwork that sprang forth out of this unique time period was some that had a distinct sense of wonder and beauty that was totally original, leading to the establishment of a movement that we now know and refer to as Abstract Expressionism.

In this article, we will observe some of the most prominent painters and artists from the Abstract Expressionism movement, noting the various elements that made them and their works so memorable.

Jackson Pollock is remembered as one of the most individualistic artists of the modern era, as his works are full of creativity that seemed to embrace the modern changes that had developed shortly after the great war.

He was known for his eccentric style of painting that was completely different from the methods and approaches used by artists who had come before him.

Pollack was best known for his new painting technique which was referred to as “action painting” as well as a number of other terms that were handed down by art critics of the day who often were enthralled with his work, or had significant problems understanding Pollock’s strange, yet overtly physical form of painting.

His methods can best be described as pouring, slapping, or even splashing paint onto a large canvas from a number of different angles.

Many art critics noted that Pollock’s alcoholism had a severe impact on his personal life and had grown out of control and heavily influenced his paintings.

Most of his works were evident that Jackson Pollock was experiencing some kind of mental distress as they grew to be increasingly dark and bizarre.

Critics and fans alike would never learn what truly ailed Pollock’s mental state as he died suddenly in a car accident at just 44 years old.

Among the most well-known Abstract Expressionist artists, few are more famous than Clyfford Still. Known for painting scenes that were especially dark and somewhat depressing for most art critics of the day.

Still, like so many other artists from the time period, was heavily influenced by the terrors and horrors of war, which only seemed to be maximized by the especially destructive nature of World War II, which involved more powerful bombs and the evils that are associated with chemical weapons.

As his career began to take off, Still’s painting style began to take on a more strange and distinct appearance as the artist started using jagged, dark gashes and sharp angles in his works.

Most of his works were among some of the truly unique paintings from the Abstract Expressionism style as they featured juxtaposing colorations and stark contrasts between light and dark.

His paintings were given titles that were equally distinctive, such as his most notable works like 1957-D-No. 1.

Still’s career would be one that carved a path away from the more conventional painting styles of the day and established his own distinct methods and techniques that are among the most easily recognized of the movement as a whole.

Willem de Kooning is an artist that many critics and art historians might consider to be the quintessential Abstract Expressionism painter.

His career as an artist began during years he spent in his youth working as a tradesman in fields like carpentry and other jobs. De Kooning would dabble more and more in painting when he was not working, which eventually led to him being noticed by some prominent artist and art enthusiasts of the day in New York City.

Some of his most famous works are those that historians who have extensively studied the movement note as being some of the most recognized paintings of the Abstract Expressionism movement itself.

One such work, titled Excavation, was done in 1950 and features a number of elements that depict the inner state of de Kooning’s mind, which art critics believe he attempted to ‘excavate’ and uncover with this particular painting.

Throughout his life, de Kooning would go on to paint many more works that were considered to be masterpieces of the Abstract Expressionism movement.

Some artists in the Abstract Expressionism movement strayed away from the especially dark and morose images that others were known to create and produce works that were more uplifting and pleasant to the eye.

Mark Rothco was an artist who developed a reputation for painting various works throughout the Abstract Expressionism movement that were especially colorful and truly unique in every sense of the word.

Rothco was an artist that many historians and critics consider to be a founding member of the Abstract Expressionist movement itself.

Many of his most notable works feature simple colorations that are presented in blocks or sections that are sometimes separated by thin borders or nothing at all, allowing the colors to fully butt against one another and further highlight the differences between such hues like deep red and pale green.

One of the most famous female artists from the Abstract Expressionism style of painting is Helen Frankenthaler, who was famous for her works that were viewed as uplifting and very positive compared to some of the dark and disheartening works that were so commonplace among European and American artists following the end of World War II.

She used various soft and bright colors that had an especially feminine nature about them, possessing a sense of optimism that many individuals in post-war Europe or America craved after so many years of death and turmoil.

Art critics developed a term called Color Field painting, which was used to describe Frankenthaler’s work. The style was known for the artist’s use of a singular, overwhelming color that covered the expanse of the entire canvas and could be seen in virtually every portion of the canvas’ surface.

Franz Kline was mentioned alongside such famous names in the Abstract Expressionism movement as Jackson Pollock, Willem de Kooning, and others.

He was an American painter who gained a reputation for producing works that explored the far reaches of artistic expression and the simplicity that could be involved in modern artwork.

Many art historians note that critics of his day were known to be especially harsh toward his exceptionally unique approach to painting, noting that they seemed somewhat elementary in certain ways as they lacked defined edges and structure.

Nevertheless, many found his paintings to be a breakthrough in the various ways in which an artist could portray certain figures through a series of vast, sweeping brushstrokes.

His work is often described as being especially lively and ‘action-packed’ compared to other painters from the Abstract Expressionism movement.

One of the most distinctive artists from the Abstract Expressionism movement was Lenore “Lee” Krasner, who was famous for her works that featured various forms of collage.

She was married to Jackson Pollock and the pair were known to have encouraged the other to develop their own styles further, which many believe would go on to heavily influence the painting style of Pollock and Krasner herself in various ways.

Her painting style was one that was among the most uniquely individualistic among the many different branches of Abstract Expressionism. Much of her focus was on the human body and the natural beauty of the female figure.

She was also known to have painted various forms of flowers and other natural scenes that had a much more structured approach than Pollock’s wild and thrashing paint splatters and splashes.

Most of her famous works featured various bright and lively colors that were tied together using a sort of border around the edges of the canvas. She had a reputation for being among the most famous female artists from the time period and also for the influential role she played throughout the decades following World War II.

Barrett Newman is recognized as one of the most influential figures of the Abstract Expressionism movement and an artist who is one of the most famous painters from the early to mid-1900’s.

He would develop a reputation for developing works that featured various dominating tones and hues that seemed to be evident in every part of the painting.

This characteristic has led art critics and historians to name Newman among some of the few artists who were known as one of the few well-respected Color Field painters.

His works were often very straightforward and featured only a few colors that were designed to force the viewer to face the color itself, which was a truly unique version of Abstract Expressionism that few other artists had explored in similar fashion.

He is considered to be one of the most prominent artists to have focused on contrasting colors during his career and many of his works are regarded as masterpieces in the Color Field art style.

One of the most influential artists from the Abstract Expressionism movement was Philip Guston.

He was also known to have been heavily involved in political movements of the day and many of his artworks had political messaging or undertones that were aimed at influencing the viewer in some form or another, if only to get their attention for a few moments regarding certain issues that Guston deemed to be highly important.

Many critics harshly derided his work as being nearly cartoonish in some ways, but others hailed his paintings as masterful works that featured simplistic colorations and brushstrokes that were very much aligned with the styles of Abstract Expressionism that were popular during his career.

He is known to have produced paintings that were also considered to be classified as being part of the Neo-expressionism or other movements, but he is largely regarded as a famous painter with a knack for expression in abstract forms.

David Smith is likely regarded more as a sculptor than a painter who created works in the style that is congruent with Abstract Expressionism.

His paintings were very similar in spirit and style to many of his sculptures, which were simplistic, yet masterful when considered from a two-dimensional standpoint.

Some of his works are reminiscent of those produced by Jackson Pollock, but Smith’s most notable works were heavily influenced by Surrealism.

He painted a massive number of works, often more than 300 in a single year, during the height of his career.

What drew many critics toward his unique style of Abstract Expressionism was Smith’s ability to portray a variety of figures and scenery using abstract techniques, making him one of the most highly-regarded artists from the era.