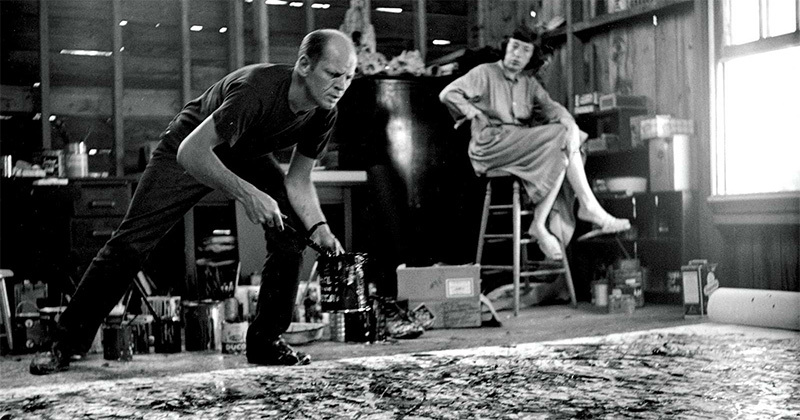 Jackson Pollock grew to prominence as one of the leading American artists of the 20th century.

To the general public his most know for his large drip paintings canvases that pushed the boundaries of abstract expressionism.

Like most abstract painters Pollock’s work challenges the viewer in ways never before seen in the art world.

Jackson Pollock was an American painter. He is best known as a significant figure in the abstract expressionist movement.

Jackson Pollock father was adopted and born in Cody, Wyoming, on January 28, 1912, and took on Pollack as his surname. Biological parents, Stella May and LeRoy May. Pollock was born and grew up in Tingley, Iowa.

His birth mother was born with the surname McCoy and Jackson Pollock father took the surname of his neighbor. Pollock’s parents were of Irish and Scots-Irish descent, Presbyterian, and had died within a year of each other.

Jackson Pollock was a recluse alcoholic, with a volatile personality. He married artist Lee Krasner in 1945 who became an indispensable influence on his career and his legacy.

Pollock died on August 11, 1956, at the age of 44 in a single-car alcohol-related accident in a car he was driving. Years after Pollock’s death, the Museum of Modern Art (MoMA) in New York City and at The Tate in London, in 1998 and 1999 memorialized his work.

Pollock was the leading advocate of Abstract Expressionism, characterized by the free-associative gestures in the paint. Abstraction, as a concept in Art, divides opinion as to how it could be Art.

Abstract Expressionism is a 1940 movement in American painting that dominated Western painting during the 1950s.

Most of the abstract expressionist artists exhibited their work or lived in New York City. There is no one painting style associated with Abstract Expressionism, for the types vary in both technique and expression.

Color Field Painting within Abstract Expressionism is distinct from Action Painting. Mark Rothko, Barnett Newman, and Clifford Still, abandoned all suggestions of Figuration- Figurative Art (a form of a body for instance) by exploiting the poignant power of color.

The epitome of abstraction is Action Painting. In preparing the painting, there is a physical, passionate relationship between the artist and the work itself.

Further, the artist strokes of the brush seem without out thought in that the strokes to the canvass are dynamic and seem instinctual. The application of the paint is vigorous with sweeping brushstrokes, with the chance effects of dripping and spilling paint onto the canvas.

But by the end of the 1950s, prominent Action Painting artists shifted to the colour-field because Pollock’s style was well-liked. For instance, Pollock’s painting “No. 5, 1948,” has been sold for about $140 million.

The automatic approach of the Action painters was primarily conceived as an identifiable example of the artist’s spontaneous creative forces which should lay free on the canvass.

In other words, the act of painting itself is a moment of the artist’s creative interaction with his work, which was as significant as the finished work. Pollock would incorporate an intuitive approach as bold brush strokes.

It is essential to know why the artist chose a particle art style to fully understand why the artist adopted or experimented with an Art movement. Thus, art Experimentation is the Artists guidepost to understand the work of an artist.

An artist can discover new genres and create something new by learning new approaches or styles; an artist creates value through discovery and growth.

Jackson Pollock experimented and became famous and respected as a modern artist as a result of this experimentation.

Figurative Art expresses the artist’s realistic view of human experience with strong references to the real world, such as the human form.

After the Second World War, Figuration can be found in the works of Jackson Pollock, Francis Bacon, Lucian Freud and artists of the School of London after World War II.   Kunstmuseum Basel has displayed striking Jackson Pollock’s figurative Art paintings in its Art Museum in Switzerland.

As Color Field painters, these artists do not paint a form or a mass standing out against a background because the figure or shape and the ground are one.

As a natural offshoot of Abstract Expressionism, a new style of Art named Surrealist Automatism emerged. This technique is at the outer limits of the basic forms of Art which contains writing at an unconscious level.

One would ask why would a painter even legitimize scratches, scrawls, or doodles recorded on the canvass as within the realm of Art.

Those practising this artform blatantly state that anything found on the canvas, even unconsciously placed is defined to be within the category of Art.

These artists include Jackson Pollock are connoisseurs of describing anything on the canvass to be within the realm of the painter Should this be considered an art form?

In the 1920s and 30s Automatism was developed by the Surrealists in Europe. They seriously claimed that the scratches, scrawls, or doodles recorded on the canvass unknowingly without the artist’s conscious control is Art because the artist purposely left on the canvas these unintelligible forms so the viewer of the painting would make unconscious associations.

The painter found the markings useful because he was unrestrained in making spontaneous creative forces. The automatic style of the Action painters was primarily conceived as a means of revealing, which were considered as necessary within the finished work as an example of the artist’s spontaneous creative forces which should lay free on the canvass.

In other words, the act of painting itself is a moment of the artist’s creative interaction with his work, which was as significant as the finished work.