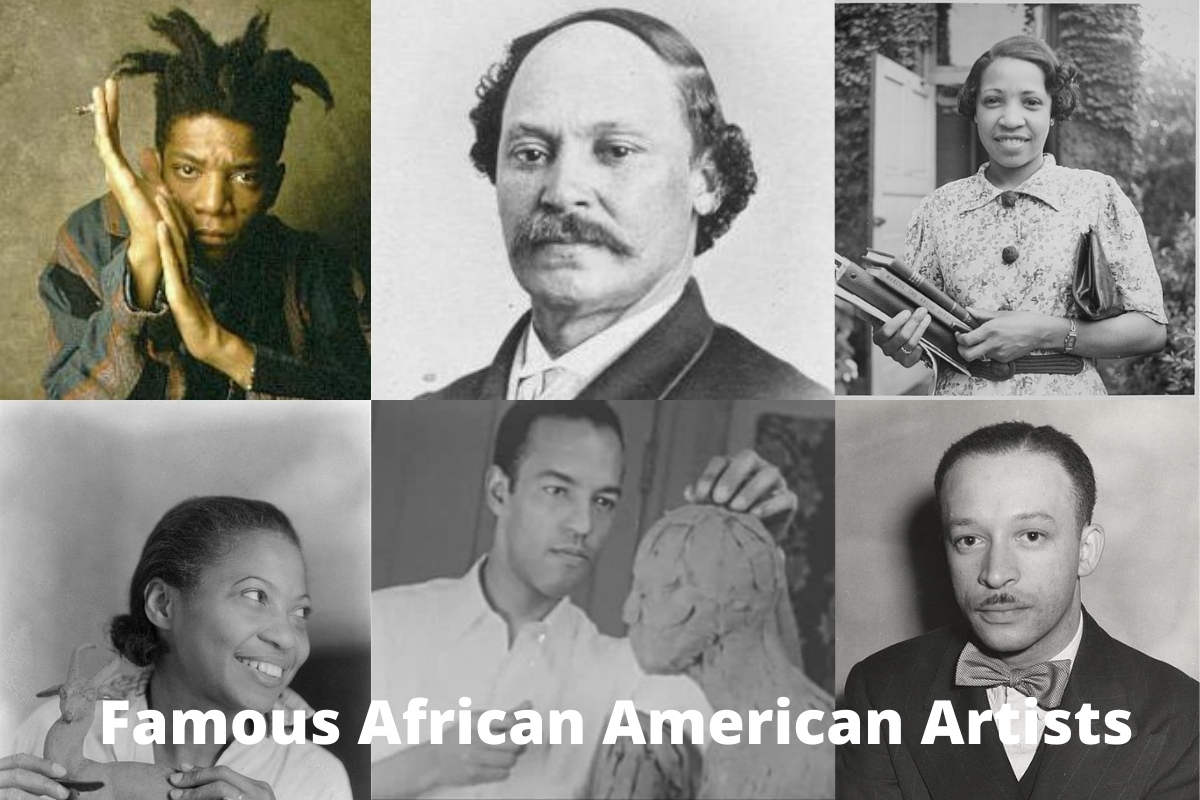 American art and culture is one of the most unique of any geographical region in the world for the simple fact that the country has been a melting pot of various nations and ethnicities since it was founded centuries ago.

Many African American artists have emerged over the last two hundred years that have had an incredibly powerful ability to capture the struggles and triumphs of their rich and vibrant culture.

Some of the most prominent African American artists have developed a style that is all their own, making their artwork even more awe-inspiring.

In this article, we will identify 10 of the most famous African American artists in history and explore their works and styles, as well as how those work have impacted American culture as a whole.

Most art historians and critics will agree that Jean Michel Basquiat is among the most iconic African American artists in history.

Born in Brooklyn during the Civil Rights era, Basquiat famously used social commentary and statements in his works in a way that shined a special light on such contrasting items as wealth and poverty and the implications that integration had over the course of history across the United States.

New York City became a central location for Black artistry during the decades shortly after the Civil Rights movement and Basquiat was among the artists who put the city on the map for highly unique portrayals of cultural significance.

Many of his works showed themes and characteristics that were distinctly African American in nature, but the style and art quickly became one that the city of New York identified with as a whole.

Basquiat is most famously known for his role as a street artist and his flavor of edgy creations that would blend art and graffiti together in a way that nobody had done before.

Basquiat’s life was tragically cut short at the age of 27, but his legacy in art and culture would live on through the years and shape the American art scene drastically.

Among the most well-known artists in African American history, Jacob Lawrence is perhaps one of the most distinguishable from others. Lawrence was known to produce works that were considered to be part of what many art critics described as Cubism, but he described his methods and style as Dynamic Cubism.

Born in 1917, Lawrence’s life experience was such that he lived through times when African Americans were still poorly regarded in society.

When he was only 23 years old, he produced Migration Series, which was one of his most famous works as a series of colorful paintings that were focused on the great exodus of African Americans who moved from the volatile South into northern states that were more accepting and less segregated.

Many of his subsequent works would also feature the plight of African Americans and their experiences in the nation’s culture and political landscape.

He is among the most highly regarded African American artists and his works are considered some of the most transformative of any artist in United States history.

Robert Seldon Duncanson is among the most iconic African American artists who lived before the Civil Rights era.

Born in New York in 1821, Duncanson lived as a free man during a time in which slavery was widespread across much of the southern United States with various politicians looking to expand the practice westward as the country grew.

Duncanson’s works were such that art critics of the day were highly impressed upon first viewing them. However, many of them would retort with a condescending nature upon learning that Duncanson himself was African American.

Despite being a wildly talented artist, he would not enjoy the same amount of commissions as white artists from his lifetime likely because of his ethnicity.

He was very highly supported by prominent abolitionists who would hire him to paint some of the most breathtaking vistas from the American heartland.

Augusta Savage was born in 1892 and would become one of the most prolific black female artists in history.

She was a sculptor who moved to New York City at the age of 29 to pursue her career as an artist in what became a bustling hub of creativity for Black artists.

She arrived in New York City in 1921 at the onset of what would later become a historic period of incredible growth and imagination among African American artists known as the Harlem Renaissance.

She attended The Cooper Union for the Advancement of Science and Art and excelled in her studies, obtaining her degree a year earlier than expected.

Savage became a sensational member of the Harlem Renaissance and went on to found the Harlem Artists Guild in 1935.

She was instrumental in helping other prominent African American artists launch their careers, one of which was none other than Jacob Lawrence.

Henry Ossawa Tanner was a famous African American artist who was widely known for his works that featured themes from the Bible and Judeo-Christian teachings.

He was born in Pennsylvania in 1859 and was recognized as a talented artist in his youth. He enrolled in 1879 at the Pennsylvania Academy of Fine Arts in Philadelphia and quickly became one of the most celebrated students despite the fact that he was the only African American among his peers.

He would later move to Paris in 1891 and continue working to be recognized for his mastery as a painter.

Tanner’s legacy is one that is as highly regarded as any other famous African American artist.

His works blended incredibly realistic combinations of light and darkness and his unique style of painting would even be one source of inspiration for the famous American painter Norman Rockwell.

Kara Walker is famously known for her works that feature contrasts and issues that are racial in nature.

She is a celebrated silhouettist, painter, and print-maker who is known, not for especially vivid and colorful works, but for her black and white silhouettes.

Her career began in 1994 and she has since grown and established what many see as a distinctive brand of artwork that solely focuses on silhouettes from the antebellum South.

Her most notable work thus far is a massive tableaux of black cut-paper silhouettes that feature various scenes and figures that are associated with the American South before the Civil War.

Kehinde Wiley established himself as one of the best African American artists in modern history in 2017 when he was commissioned by First Lady Michelle Obama to paint a portrait of President Barack Obama for the National Portrait Gallery, which features a portrait of each of the 46 presidents of the United States.

Wiley is known for his use of vibrant colors with floral backgrounds, which his painting of Obama famously displays.

The artist is also known to be a prolific sculpture with one particular work being prominently featured in New York’s Times Square at its unveiling. The statue takes a very modern take on the classic portrayal of a mounted figure of prominence such as a military or political leader.

Charly Palmer is one of the most celebrated painters of the modern era in the United States. He is best known for his works that portray famous portraits that incorporate various figures that incorporate floral or other designs into the background or clothing.

He is also highly-regarded for his works that feature African Americans posed in front of structures and stained-glass backgrounds that are composed of a litany of colors.

He was selected as the artist to complete the poster for the 1996 Olympic Games in Atlanta, as well as the Winter Olympics that took place in Nagano, Japan in 1998. He has recently devoted much of his efforts to the Black Lives Matter movement and to various efforts to focus on racial justice in America.

Among the most prominent and famous African American artists, Romare Bearden has experienced one of the most widely celebrated careers of any.

He was born in 1911 and much of his early work focused on unity and togetherness within the African American community—a characteristic he strongly felt was lacking and was also needed in order for Black Americans to progress in the United States.

He worked on various different areas that include everything from cartoons to abstract works that portray the life of African Americans during the antebellum period and shortly after the Civil War.

He had an illustrious career as a soldier in World War II, then later as a semi-professional baseball player before he focused solely on his artwork.

Sam Gilliam is one of the most famous artists from within the African American community who worked in the area of Abstract expressionism in various forms, including as a lyricist.

Many of his works during the 1950’s and 1960’s include paintings that focused on color field art, which features various elements that combine in strong and often vibrant colors.

Gillam became famous for his use of draped canvases that were not secured to a background board and much of his later works focused on similar elements of abstract expression combined with geometric renderings.