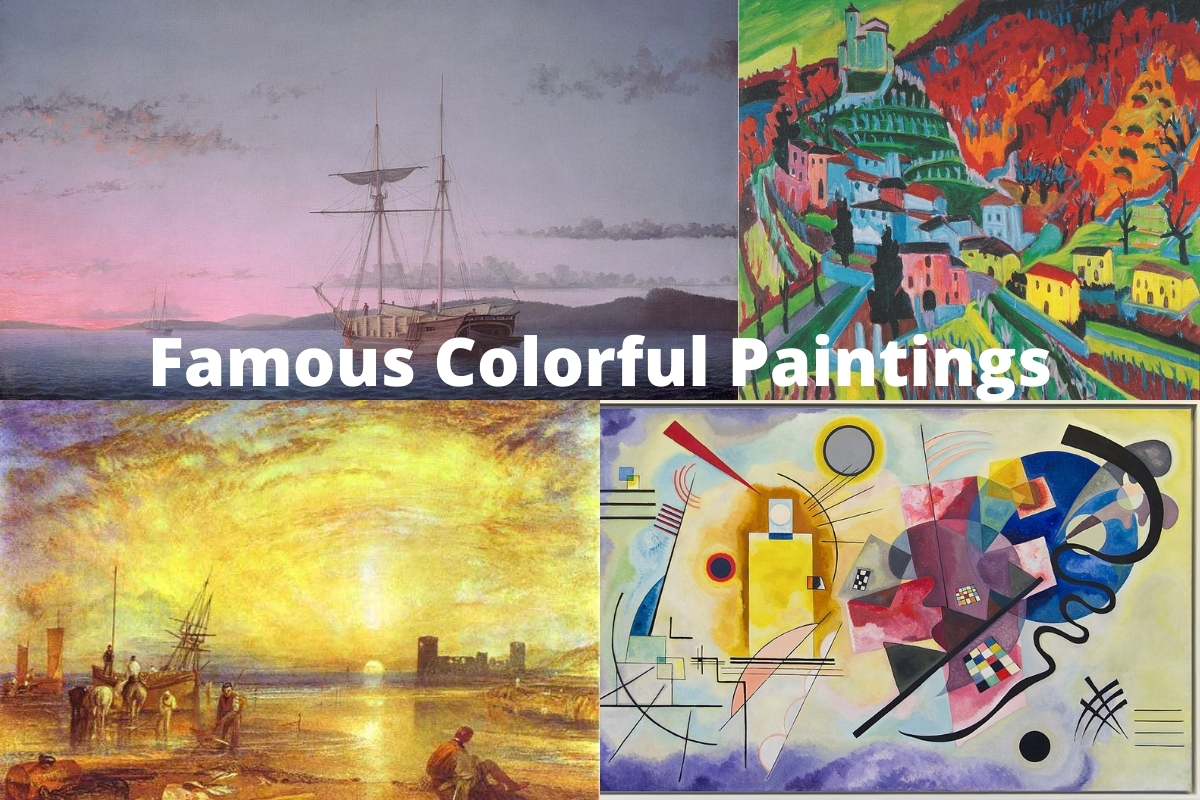 One of the most eye-catching aspects of any masterful painting is the colors used by the artist.

Throughout history, there have been numerous styles of painting and various art movements that have focused on colors in differing lights, intensities, and contrasts, but the ability to captivate the viewer with an array of colors is a skill that simply can’t be taught in the most prestigious art schools of the world.

Certain artists have made their mark on human history by carving a reputation for being especially colorful when it comes to producing paintings.

Some of the most famous paintings of all time have been designated so due to the artist’s use of perspective, realism, and many other elements.

Color, however, is one characteristic of a true masterpiece that has remained unchanged from the dawn of the earliest artwork ever produced by humankind.

In this article, we will discuss some of the most famous colorful paintings ever created and take a deeper look at why these works are so highly esteemed by art enthusiasts and historians alike.

Wassily Kandinsky is known as one of the most prolific modern artists of the Abstract art era. His works feature some of the highest levels of contrasting colors, shapes and perspective of any artist from the early 20th century.

It is fitting that the work that is usually considered to be one of the greatest bright color paintings of all time is titled Yellow-Red-Blue.

This painting was created by Kandinsky in 1925 and features an intriguing combination of the known primary colors along with some of the most basic geometric shapes.

The merging of these two elements is done in a masterful way by Kandinsky, who included thick and defined black lines that seem to cause the viewer to focus on the specific colors and shapes in a more thorough manner than they would without these lines.

This painting was done on a massive canvas and features a huge variety of directional shapes and lines that beg the viewer to further inspect each portion of the work in a totally unique way.

Despite the vast array of shapes, lines and varying hues, Kandinsky seems to have created a strange harmony of all these elements in one single work.

Mark Rothko’s work titled White Center is considered to be one of the most famous paintings that focuses mostly on the colors used by the artist across the entire canvas.

This painting has been viewed as overly simplistic to the untrained and uncultured eye, but many art scholars and historians consider it to be among the greatest masterpieces of all time that involve heavy focus on the colors used by the painter.

In this work, Rothko combines multiple blocks that seem to form some type of layered image which is bordered by a faint reddish hue around the edge of the canvas.

The colors seem to compliment one another in a strange, yet harmonic manner that is somewhat unexpected upon first looking at the painting.

Deeper inspection of the colors of this painting and just how they merge together with one another appears to encourage a greater appreciation for their complementary nature on behalf of the viewer.

One of the most unique works on our list of colorful paintings was created by Paul Klee.

This 1928 masterpiece of color is titled Castle and Sun and features a wide array of shapes that are made up of bright, bold colors.

The painting is a distinctive approach to modern abstract art that was quite popular in the United States and throughout the rest of the world during the early 20th century.

The shining sun illuminates the castle and sky above it in such a way that creates a deep and intense coloration that seems to dominate the entire work.

Klee was known to have created many works that truly have his own special style of cubism that is quite unlike any other artist before or after him.

The painting includes some elements of realism and proportionality, but also utilizes simple, straightforward geometric shapes to emphasize the structural aspects of the castle itself and how each section contrasts the other parts of the work.

John James Audubon was a masterful painter who worked to thoroughly document the many different types of wildlife living in and around various places in the world, especially southern Florida.

This region is known for its tropical nature and features vast arrays of birds, fish, and other animals that sport a bustling combination of colors that might be unbelievable to those who had never seen them with their own eyes.

Audubon’s painting titled Roseate Spoonbill was completed in 1836 and was created to capture the beauty and essence of one of the region’s most intriguing birds.

The artist obtained a specimen of the bird and worked to recreate what it looks like in its natural habitat as many biologists and others had rarely ever witnessed the creature alive.

Audubon’s work famously included a detailed description of the bird and as many details as he could find about the animal with the painting.

Capturing the natural essence of the captivating nature of a picturesque sunset is often considered to be one of the hardest feats to accomplish by a painter.

However, Lumber Schooners at Evening on Penobscot Bay is an 1863 work produced by Fitz Henry Lane that seems to gloriously replicate the natural beauty of the sunset where the Penobscot River meets the Atlantic Ocean.

Lane’s ability to blend the deep and illuminated purple coloration of the sunset with the rest of the work is a wonder in and of itself.

He managed to capture the last bit of sunlight just as it faded down into the space where the horizon and the sea meet.

J.M.W Turner is famous for his works that center around maritime travel and coastal areas across Europe and much of the world.

One of his works titled Flint Castle was produced in 1838 and includes one of the most striking depictions of the sun and its contrast with the water and other elements along the shoreline.

Turner was well-known for his ability to create works that managed to capture the sun and the sea’s beauty in single paintings, a feat that some of the most reputable artists in the world have struggled to accomplish.

This watercolor is considered to be among the most colorful paintings ever created.

Few artists were able to capture the beauty of the American southwest in the same manner that Georgia O’Keeffe managed to.

Her works adequately captured the unique beauty and colorful essence of the region that is one which is unlike any other place on Earth.

Her painting titled Grey Blue & Black – Pink Circle was created in 1929 and seems to incorporate the distinctive pastel-looking coloration of the southwest’s desert and the way in which the sun plays across the many hues that are layered along the canyons in that region.

This, like so many other works done by O’Keeffe, captures the strange and intriguing coloration and nature of the Native American tribes and their artistic styles that can only be found in the southwestern United States.

Hermann Scherer is one of the most underappreciated artists from the Expressionist movement who created works that highlighted the areas in and around his native Europe in a truly distinct manner.

His painting titled Mendrisiotto with Church of Obino was done in 1926 during the height of the modern Expressionist era.

This particular work highlights the contrasting colors of the buildings that surround the Church in the quaint town in such a way that creates a strangely vibrant image that is truly captivating.

Sherer was just as well-known for his ability to carve wooden sculptures and this particular painting is widely considered to be his greatest accomplishments as a painter.

Medicine & Hygeia is a work that was created by Gustav Klimt in 1901 that incorporates a wide range of striking colors and beautiful contrasts between the spiritual and physical realms.

Klimt was known to dabble mostly in the human form and this particular work incorporates elements that appear to be spiritual, as well as human-like.

The painting features Hygeia, the mythical daughter of the god of medicine who appears to hold the ability to heal in her hands.

The painting is filled with references to various gods and goddesses from different cultures, but many art enthusiasts and critics from this time period viewed the painting as one of great controversy due to the overt depictions of nude individuals throughout the canvas.

One of the most iconic paintings ever created in the modern era was done by C.M. Coolidge in 1903. The work famously features a group of dogs seated around a card table engaged in a serious game of poker.

The work is known as A Friend in Need and has likely been seen by the casual art observer and nearly everyone else in the United States and other countries at some point or another as it is one of the most highly-replicated paintings of all time.

The work features a curious combination of canines that are viewed as being very lifelike, yet at the same time, arranged in a comical manner that seems to bring focus on the humorous aspect of the painting as it features different breeds of dogs locked in an intense game of poker.

Some art historians have commented that there is some level of metaphoric meaning that can be derived from the work while others simply point to it as a comical, yet masterfully-painted work.

Regardless of the underlying meaning, the combination of light and dark along with the colors of the painting create a truly memorable scene.