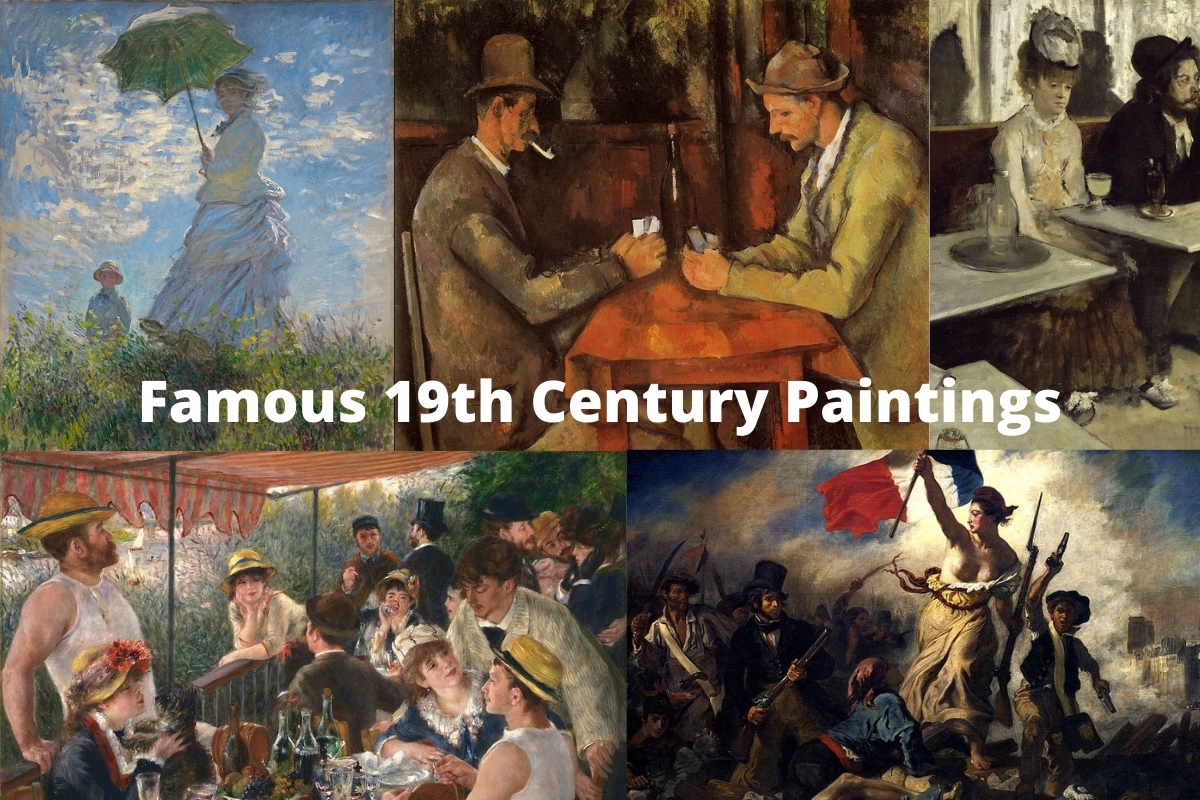 The 19th century was a time in which many artists began to produce notable works using various new methods of painting. Impressionist artists often left the comfort and solitude of their studios to venture out into public or to a distant location to paint a landscape.

France was the epicenter for much of the century’s most famous artists and art movements as Paris was a hotbed of creative thought during this time.

Unlike centuries before the 1800s, artists began to explore methods of painting that reflected more about their own inner feelings toward the subject rather than how the subject itself actually appeared.

Realism gave rise to Impressionism and other styles of painting emerged in the latter part of the 19th century that focused heavily on the many different perspectives that are so often ignored in two-dimensional image paintings.

1. Woman with a Parasol – Claude Monet

Claude Monet was a masterful Impressionist painter who commonly focused on the female form while fully dressed in the outdoors. His work titled Woman with a Parasol is one that highlights his incredible ability to portray the sun’s captivating effects on a woman as she stands on a windswept hillside holding a parasol, which was common for women to carry at the time.

The majority of Monet’s paintings were painted ‘en plein air‘ or outside in nature, he would routinely paint the same scene multiple times in varying light conditions, there is only one Woman with a Parasol though.

Monet painted the work in 1875 and he later noted that the young child in the scene is the woman’s son who is seen curiously looking toward the viewer.

Monet is best known for his use of bright, colorful hues to portray people in the midday sun. This particular painting is a notable combination of light and shadow as the viewer sees very little surfaces that are experiencing direct sunlight.

Instead, we have an image that’s shadowed and features sweeping edges as if to indicate the wind’s strong effect on this fleeting moment. Monet later said that it was his intention to portray a casual family outing instead of a rigid and more formal portrait.

The French Revolution was one of the most volatile times in European history. The events of the lesser known July Revolution took place in the summer of 1830 and saw less violence, but an overwhelming amount of passion from the French people to topple what many viewed as an undeserving monarch.

Eugene Delacroix painted his work titled Liberty Leading the People that same year as an effort to urge the people of France to press on toward full liberation from the monarchy that had constricted their freedoms for so many years.

The painting depicts a valiant charge of ordinary French men armed with muskets. At their front is a beautiful female figure, often referred to as Marianne, who represents the French Republic. She is adorned in a dress that only half-covers her torso while holding the French flag and a musket, appearing to beckon the men to charge onward over the fallen king’s soldiers.

Jean-Francois Millet is known as one of the most famous artists of the Realism movement that took place in Europe during the mid-1800’s. His works commonly focused on peasants and the common French citizen who often spent every waking hour of each day working to scrounge what they could to get by.

His painting known as The Gleaners is one that encompasses his efforts to bring to light the struggles of the poor French peasant class amidst a time when the aristocracy lived in much better conditions.

The painting depicts three peasant women gleaning, or collecting crops that had been left behind by those who initially harvested the field. The very act of gleaning was one that peasants were very familiar with and it was considered one of the most undesirable jobs in the French farming culture at this time.

This work accomplished the goal the Millet likely intended of highlighting the harshness of life for many French peasants during the 19th century.

Edouard Manet is considered a unique artist during the 19th century who managed to bridge the gap between Realism and Impressionism through his works.

He commonly focused on the female form in a natural setting and his painting titled Dejeuner sur l’Herbe, or The Bath, was initially known as Luncheon on the Grass. Painted in 1863, Manet received quite a bit of backlash from art critics at the time for what they deemed to be the lewd nature of the work.

The painting features a nude woman lounging with two fully-clothed men in a wooded forest while another woman in the background is seen bathing. It’s controversial nature is perhaps why is has remained as a central work of French mastery and one of the most famous paintings of the era.

5. The Raft of the Medusa – Théodore Géricault

One of the most famous paintings in the French Romanticism movement is known as The Raft of Medusa. Painted by Théodore Géricault in 1819, this work features a grisly scene of sailors who were the only survivors left from the shipwreck of the French naval frigate known as the Medusa.

The artist sought to commemorate the lives of the sailors that were lost in the accident and painted the scene in a darkened, bleak colored manner that seemed to denote the gravity of their situation while lost at sea.

The incident was one that drew high amounts of worldwide criticism due to the belief that the French naval command acted in a way that put the men’s lives in danger. Géricault’s painting was viewed as a fitting way to honor the men.

Few 19th century artists are as well-known as Vincent Van Gogh. Despite his struggles with mental illness, he was hailed as one of the most masterful painters of the time period. His work titled Cafe Terrace at Night was painted in 1888 and featured a scene of the quaint street in the latter hours of the evening.

The street and the cafe are illuminated by a warm, yellowish light that seems to emit a welcoming glow toward anyone who knew the popular location. The work was one of the most famous cityscape paintings by Van Gogh who would later be faced with a bout of serious depression and bipolarism which took an immense toll on his physical condition.

John William Waterhouse is an artist from the 19th century who was known for his high attention to detail and his ability to portray scenes in a vibrant and lifelike manner.

His 1888 work titled The Lady of Shalott is widely noted as one of the most famous paintings from the time period as it represents the ending of one of Lord Alfred Tennyson’s poems which bore the same name as the painting.

The painting drew considerable amounts of praise as Waterhouse showcased his ability to paint a scene with such beauty that seemed to harken back to the Italian Renaissance period. The Lady of Shalott is seen in a boat that is drifting along a serene lake, just as Tennyson’s poem describes.

Many artists painted scenes from the bustling Parisian social scene that took place during the last few decades of the 19th century. Few would produce works that were able to capture it in a more moving fashion than Pierre-Auguste Renoir, who was known for his ability to paint jovial social interactions between young and affluent French people of the time period.

His painting titled Luncheon of the Boating Party depicts a group of Renoir’s friends relaxing in the warm midday setting of the Maison Fournaise restaurant, which was a popular destination in 1881 when the work was finished. This work features the same vibrant color arrangement that most of Renoir’s paintings were famous for using to portray the thriving social life of many young French citizens of the time period.

French artistic society had its fair share of figures who were considered outsiders among the most well-known circles of Parisian artists. Edgar Degas was one who received quite a bit of backlash from among his peers for paintings such as his 1876 work titled The Absinthe Drinker.

This painting portrays a man and woman seated side-by-side in a Paris cafe, clearly inebriated by the effects of their drink of choice, which was known to produce feelings of lethargy and a solemn demeanor.

While many well-known painters looked down on Degas for painting scenes that included drunken individuals, others praised him for his ability to portray French society as it actually was during the time.

Paul Cezanne is remembered as one of the most famous artists of the 19th century and a central figure of the Post-Impressionist movement that took place toward the late 1800s.

His work titled The Card Players was part of a series of paintings that featured French citizens engaged in everyday activities like card games and other casual activities.

This particular work was done in 1895 and features two men seated at a small table, playing a game of cards. A bottle of wine sits beside them on the table.

This and other works by Cezanne which featured groups of men and women often engaged in casual drinking was viewed by many well known art critics of the day as unworthy of being featured in a painting, especially by a celebrated artist like Cezanne.

These works by Cezanne were noted as being “human still life” works as they often portrayed men engaged in card games as they stared intently at their own hand they had been dealt.