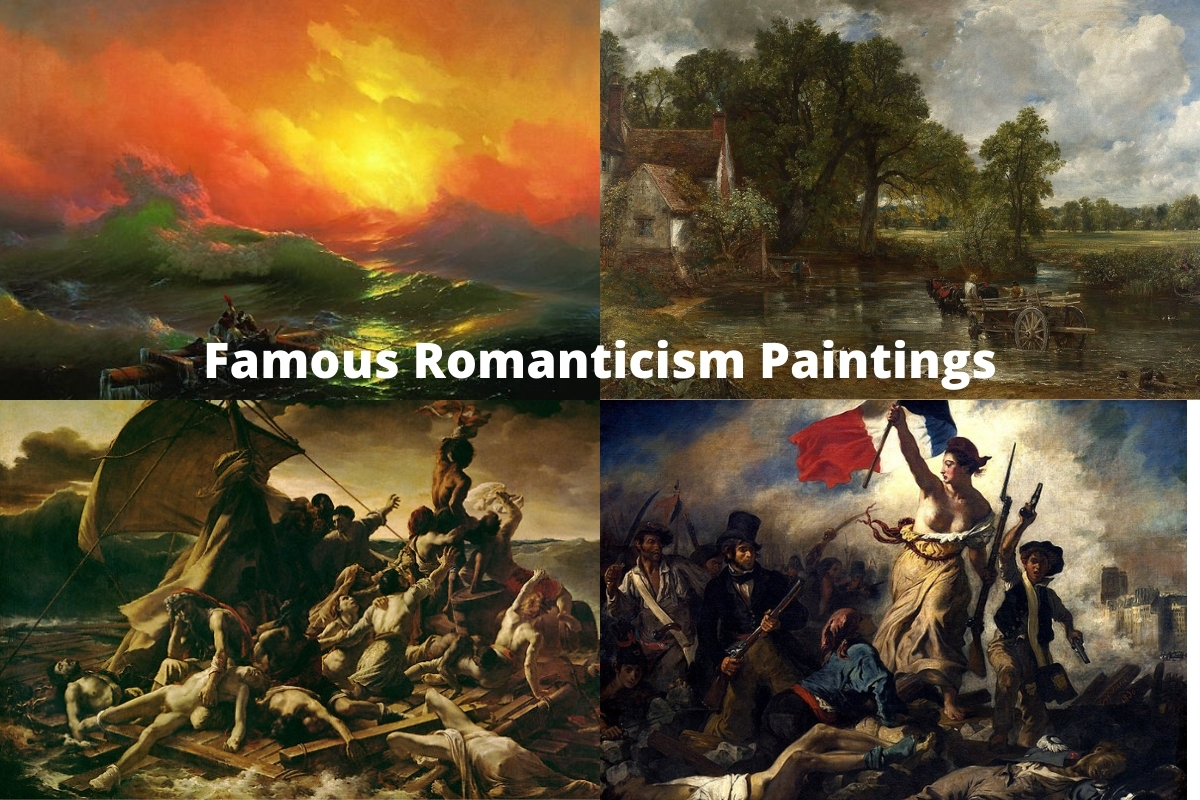 Romanticism was a movement that dominated many areas across art, literature, music and other genres during the 18th and 19th centuries. Many art scholars and historians see the movement as a response to the changes and innovations of the Industrial Revolution.

The movement reached what many consider to be its peak around the middle of the 1800’s, but Romanticism has continued to have a lasting impact on the world of art as a whole since its inception.

Unlike the Classical movement before it, Romanticism focuses heavily on natural beauty in both human form, as well as nature. Many of the movement’s most influential painters created landscape works that are considered true masterpieces by the art historians and critics who study the time period.

Romanticism’s focus was centered around the emotional state of the subject in the paintings instead of simply attempting to convey the outward beauty of a particular figure.

The movement produced some of the most iconic paintings in history that many art historians place among the greatest works since the Renaissance era.

Here are 10 of the most famous Romanticism paintings ever done.

Among the most famous Romanticism paintings ever created, Eugène Delacroix’ work titled Liberty Leading the People is widely considered to be the most well-known painting from the time period. This work is famous for its captivating beauty as much as the message of the overall scene itself.

Delacroix was known as one of the biggest supporters of a movement that is known as the July Revolution. This event occurred in France during the summer of 1830 and consisted of many of the nation’s lower-class citizens revolting against King Charles X. The artist painted this work shortly after the revolution to commemorate the overthrow of the king.

It is one of the most iconic paintings in French history as it features many of the French commoners in the midst of a heated battle against the king’s loyalists. Liberty, which is represented by a beautiful woman, leads a charge toward the fray holding the French flag in one hand and a musket in the other.

2. The Raft of the Medusa – Theodore Gericault

Theodore Gericault sought to commemorate the bravery and perseverance of the men aboard a ship that would become one of the most tragic maritime disasters in French history.

The Medusa, a French warship that was active during the Napoleonic Wars of the early 19th century, was lost after crashing into a large sandbank in the Atlantic Ocean in 1816.

The original crew of the ship consisted of 400 men, but only 151 were able to fit onto a makeshift raft that had been hastily constructed by the survivors. The raft was later found with just 15 men still alive.

Gericault painted a work that he titled The Raft of the Medusa in 1819. The painting features the parched crewman flayed over the raft’s surface as it floated aimlessly in the open sea.

Gericault’s style of painting is one of the most ideal examples of the Romanticism style as it offers a high level of emotional significance.

The true story was much more gruesome than the painting depicted as many of the surviving crewmen are said to have resorted to cannibalism in order to survive being stuck at sea for weeks in the blistering heat of the shipping lanes near Senegal.

Gericault is said to have studied the event extensively before creating the masterpiece as an effort to honorably portray the events that took place after the wreck of the Medusa.

3. Wanderer above the Sea of Fog – Caspar David Friedrich

One of the more iconic paintings of the Romanticism era was done by Caspar David Friedrich in 1818. The German artist is known for his paintings that feature human figures set against starry night skies and wide open vistas.

His work titled Wanderer Above the Sea of Fog is of a similar nature as it portrays a young explorer perched atop a rocky outcrop, overlooking a fog-covered valley below.

The painting was done during a time in which exploration was largely romanticized by much of Europe and the United States. Friedrich’s work appears to convey the sense of wonder and adventure that was so often sought after among the many explorers of the early 19th century.

This painting is one example of how Romanticism artworks were able to elevate landscape works to new heights in the public eye.

Many Romanticism artists portrayed some of the most pivotal moments in world history during the time in which they were created.

Such was the case for Francisco Goya when he painted one of the most iconic Spanish paintings of the Romantic movement titled The Third of May 1808.

This painting was done to commemorate the events that occurred in Madrid during the first few days of May, 1808. The city was invaded and overtaken by Napoleon Bonaparte’s army in the spring of that year. The Spaniards that were left in the city rose up against the French occupying forces on May 2, 1808 in a futile effort to take Madrid back.

Goya painted two works, one to depict the events that took place on May 2 and another that commemorated what happened on May 3 when the French soldiers brutally punished the leaders of the rebellion.

Goya’s painting portrays a valiant group of Spanish men in the final moments before their execution at the hands of a firing squad.

One of Eugène Delacroix’ most noted works from the Romanticism movement focuses on a story taken from a popular poem by Torquato Tasso that was published in 1581.

The poem centers around the story of Clorinda, a lady known as a valiant warrior and great leader among the warlike culture of the Saracen army in the desert areas near Jerusalem.

Delacroix created a painting known as Clorinda Rescues Olindo und Sophroni in 1856. The work portrays Clorinda riding into Jerusalem to stop the execution of two lovers from the opposing army.

In the painting, Clorinda is seen mounted atop a warhorse riding into the crowd just as the flames begin to lick the feet of the two lovers who are tied to a stake.

William Blake created a work that features the great intellectual figure of the 17th and 18th centuries who was a popular meteorologist and physicist.

In the painting, which is titled Isaac Newton, Blake depicts Newton as a young and muscled figure sitting on a large rock. This depiction is a clear departure from many other artists’ works who portray Newton as an old, wise philosopher, often in deep thought.

Blake is said to have been highly critical of Newton’s approach to scientific matters and painted the famous theologian and physicist as being focused on a small piece of parchment below with geometric symbols written on it—clearly unaware of the beauty surrounding him.

Landscapes were a huge part of the Romanticism era and John Constable was praised for his unique efforts in bringing natural settings to life. His 1821 work titled the Hay Wain is considered to be one of the most famous landscape paintings.

Constable depicts a scene of simple English farmers at work, using horses to pull what appears to be a hay wain across a river.

The painting is considered to be one of the most iconic works of rural English history and the very location from where Constable painted the masterpiece remains a popular tourist destination to this day.

The Romanticism period is said to have reached its peak around the middle of the 19th century. Francesco Hayez created one of the era’s most recognizable paintings in his work titled The Kiss.

Painted in 1859, this masterful work depicts a simple man and woman embracing one another in a sensual kiss—their faces hidden within one another.

This romantic painting is widely hailed for Hayez’ incredible level of detail in every inch of the work. The Kiss is considered to be one of the most iconic Italian paintings in history and seems to represent a scene from the Middle Ages as indicated by the dress of both figures.

9. The Fighting Temeraire tugged to her last berth to be broken up – J.M.W. Turner

Toward the middle of the 1800’s the older, majestic warships of the Royal Navy were being replaced by the newer, more advanced ships that featured iron hulls and other innovations. J.M.W. Turner sought to capture the last moments of one of the British Navy’s most famous vessels as it was being towed out to sea to be scrapped.

The Temeraire was once known as one of the mightiest ships in the British Empire’s naval fleet and was credited as one that played a central role in the Battle of Trafalgar.

His 1838 work was titled The Fighting Temeraire tugged to her last berth to be broken up. The painting was one that defined the transition between the older and more graceful wooden ships toward a new era.

This is evidenced by the short, unattractive steamboat that is seen towing the Temeraire out to sea with the older ship seen with less coloration as if it is fading into the distance.

Turner is responsible for some of the most iconic ship paintings ever produced.

Landscapes were widely popular throughout the Romanticism movement and seascape paintings were equally famous during the period across much of Europe.

Russian painter Ivan Aivazovsky was known for creating some of the most iconic ocean paintings in history. His work titled The Ninth Wave, painted in 1850, is considered to be one of the great masterpieces of the Romanticism movement.

The painting features large waves sweeping across an open ocean, the debris from a shipwreck is depicted in the foreground. Many art critics note that the debris is in the shape of a cross, which is a clear indication that the artist meant to portray a religious meaning with Christian emphasis.

The painting’s theme and title are based on an old tale that was held as truth to many sailors in the centuries preceding the 1800’s that large waves come in a series of nine different waves.

These waves were said to be a succession of incrementally larger waves—the ninth wave being the largest of all and most destructive.