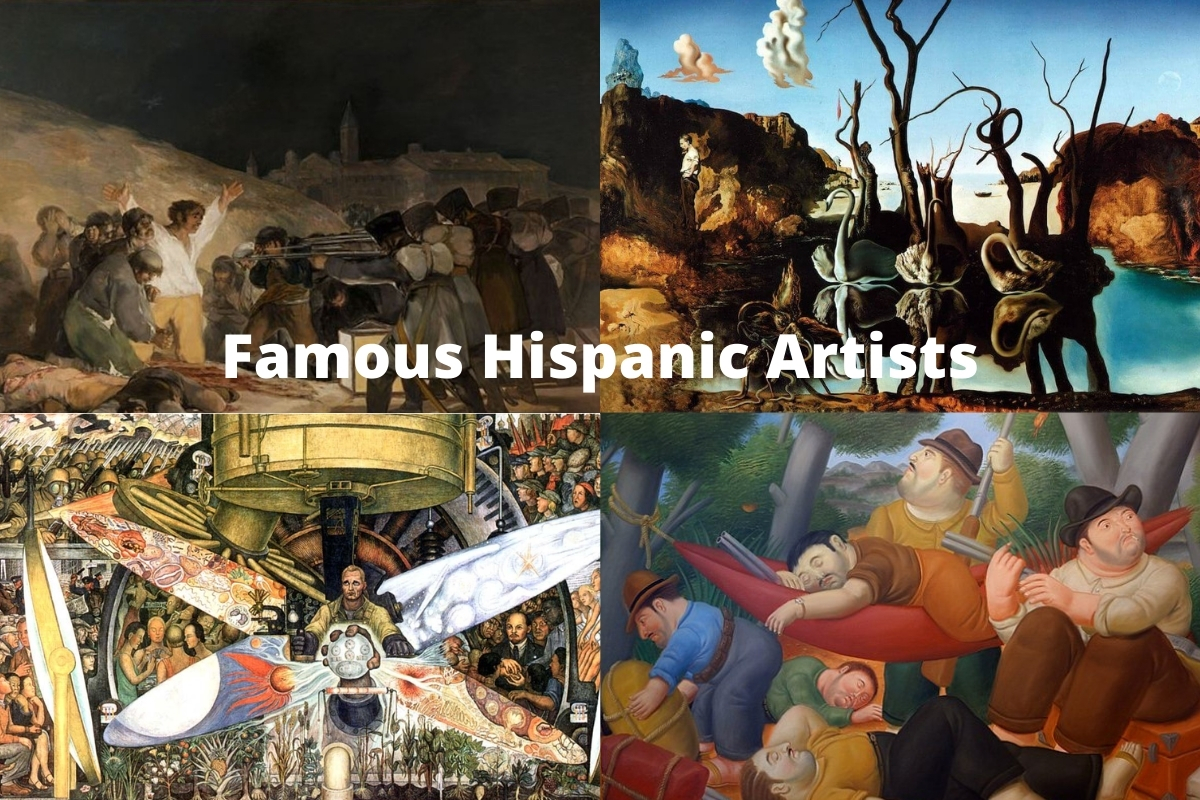 Hispanic artists are responsible for some of the most interesting art ever produced. Many of which operated on the cusp of modernity for their time, paving new paths and are major figures in some genres such as abstract art, cubism, and surrealism.

Great artist such as Picasso, Kahlo, Dali are household names in the art world but there are many more that deserve our attention, Velázquez and Goya have retained their great masters status even to this day.

The following list of famous Hispanic artists is not exhaustive but does contain some of the greats.

Renowned for his innovative and distinct style the Spanish painter, sculptor, writer, stage designer, and ceramicist is one of the greatest painters of all time. Having lived through two world wars his work was able to transcend from naturalism, cubism, surrealism, and beyond to change modern and contemporary art to what it is today.

Born in Malaga Andalusia, Spain to a father who was an artist who taught and curated art classes at the local museum, Picasso was destined for legendary status.

The mixture of varied styles to cultivate a new perspective and the prominence of romanticism in his life, allowed him to create innumerable works that ensured that he would be lauded in modern art. In the public view, he is a genius, and for many art scholars, he is an inspiration personified.

Influenced by Mexican, indigenous, and feminist culture Frida Kahlo is a prominent artist who is famous for her self-portraits that infused her pain and passion as well as bold and vibrant colors.

As a child, she suffered from polio and a car accident that almost saw her succumb to an untimely death. Painfully injured and on her road to recovery, the artist began to focus more on her paintings, and one of her works that details her horrific accident is The Broken Column which is one of the greatest Hispanic paintings ever made.

Her cataclysmic relationship with her fellow artist husband, Diego Rivera strongly elicited Love and Pain as a continuous theme in her work. Using surrealism, realism, and Marxism Frida became widely known and has been recognized as a contemporary artist who is a counter-cultural symbol in Mexico today.

Born in Fuendetodos, Spain, he would later be hailed as one of the considerably important Hispanic artists of the late 18th and 19th centuries. The most significant period for his artistic development was when he became a tapestry designer for the royal court in Madrid from 1775 to 1792 when he fell seriously ill to a point where he was deaf.

His deafness led him to sequester from people yet it propelled him to evolve into a fierce new style similar to caricature. His satirical and critical observations of humankind motivated his publication of the series of etchings titled Caprichos.

In 1799, he was appointed the first Spanish court painter. However, during the Napoleonic invasion and the Spanish war, he served as a painter for the French.

When the war ended and the Spanish monarchy was restored, he was freed from court restrictions and he focused on a more personal style that expressed his darkest ingenuity.

Diego Rivera was born in Guanajuato Mexico in 1886 but moved to Mexico City at the age of two after the premature death of his twin brother.

His parents ensured to motivate his artistic expression when they enrolled him in the San Carlos Academy of Fine Arts where he mastered traditional painting and sculpting techniques. After the completion of his studies, in 1907 he was awarded a scholarship to study in Europe.

His work contained elements of Realism and Impressionism to showcase the influence of renowned painters such as Francisco Goya until he shifted to a Cubist and Abstract expression due to Pablo Picasso’s prominence in his later years. However, at the height of the Mexican and Russian Revolution of 1917, he focused his art on political events.

This was the beginning of his interest in mural paintings and marked his active involvement in politics where he joined the Mexican Communist Society. Not only did he develop national art in Mexico but he greatly impacted America’s understanding of public art.

Basquiat lived a brief yet momentous life. His mother would take him to museums throughout Manhattan at a very young age because he displayed a peculiar level of intelligence and he could already speak multiple languages.

At the tender age of 8, he was struck by a car but he recovered, unfortunately, his mother suffered from mental ailments that led her to be committed to a psychiatric institution when he was 13. This turned his life upside down and affected his academics.

His encounter with art was through graffiti where he used SAMO as his alias, thereafter he had TV cameos and dabbled in music. His work has enjoyed critical acclaim due to its influence on African American heritage. Most of his work was fully recognized after his death.

Diego is famously known for having a keen eye and his prodigious use of the brush. He is one of the valuable Spanish painters of the 17th century and a great Western artist and art theorist.

He was King Phillip IV’s court painter and painted numerous royal portraits with the Las Menimas as his most distinguished portrait.

His works modeled sharp contrasts of light that resembled tenebrism which is a dramatic lighting technique. While painting in the royal court, he moved up the ranks in the royal court where he was busy with commissions. His involvement in the royal household and subsequent promotions left him with less time to focus on his painting.

Dalí is a renowned Spanish artist who is particularly known for his draftsmanship, technical skills, and the oddly bizarre yet striking images that formed part of his work. Though born in Catalonia, he received his formal education in Madrid where he cultivated his Surrealism, Expressionist, Impressionist, Realist, Cubist, and many more artistic styles.

Through his extraordinary expressive techniques in his paintings, sculptures, and printmaking, he cultivated a new generation of ingenious expression. The use of juxtaposed imagery in his artwork assured his maturity and placed him as the main well knew Surrealist artist globally.

The Persistence of Memory is one of his famous fuliginous images. The rise of fascism in politics left him alienated from his peers and this is when he shifted to designing jewelry and theater sets.

Born in Ciudad Guzman in Mexico and later his family moved to Mexico City, he became what is considered the most significant muralist in Fresno in the 20th century.

His early pursuit of art was inspired by Guadalupe Posada who was the greatest printmaker in Mexico. However,  his father had wishes of him becoming an agronomist and architectural draftsman.

Consequently, at the age of 17, he had a grotesque accident where he lost his left arm and this subsequently interrupted his father’s dreams. Following this, he went back to school with a renewed passion for his painting despite his physical limitations.

Later on, he was motivated to focus on Mexico to cultivate inspiration for his work and as a member of the Mexican Muralist Movement he served out to do so.

However, the Mexican government withdrew patronage with him and fellow muralists, as a result, he relocated to New York City where he vowed to be an internationally recognized artist.

He returned to Mexico in 1934 after he had firmly established his reputation. His murals became renowned for raising Mexican art to international eminence status.

Joan Miró was a painter, sculptor, ceramist whose work was widely influenced by the scenic seaside of Barcelona. He was exposed to artistic talent from a young age because his mother was a goldsmith while his father was a watchmaker. He simultaneously attended business and art school.

After completing his studies he worked as a business clerk but after battling typhoid disease he abandoned his conventional job to devote his life to being a painter.

He was known for experimenting with many art styles and mediums of expressing his work. His early work was greatly influenced by the likes of Vincent van Gogh and Psychologist Sigmund Freud. Some of his famous experiments include using watercolors, engravings, pastels, and the inclusion of raw materials such as copper in his paintings.

The peak of his career was in the 1960s where he centralized his focus to creating public works of art such as monumental art pieces and displays in public spaces. His focus on symbolism in artistic development has made him one of the most famous Spanish artists in the world.

As a Colombian painter and sculptor renowned for his work of inflated humans and animal shapes, his works were inspired by the pre-Columbian, Spanish colonial art, and murals created by Diego Rivera.

As a student, he would make copies of art paintings from the Prado museum to make a living. While studying the artistic styles in Paris and Florence, he began to experiment with proportions and size which led him to develop his distinctive and trademark style of depicting round and replete humans and animals.

The use of flat, bright-colored, and boldly outlined imagery was a reference to Latin-American folk art.

He included political satire to examine the violent crimes such as the illegal drug industry in his country and later scandals like the torture of prisoners in Iraq by American soldiers. However, his recent work that was exhibited in 2008 was lighthearted and included works that featured circus performers.