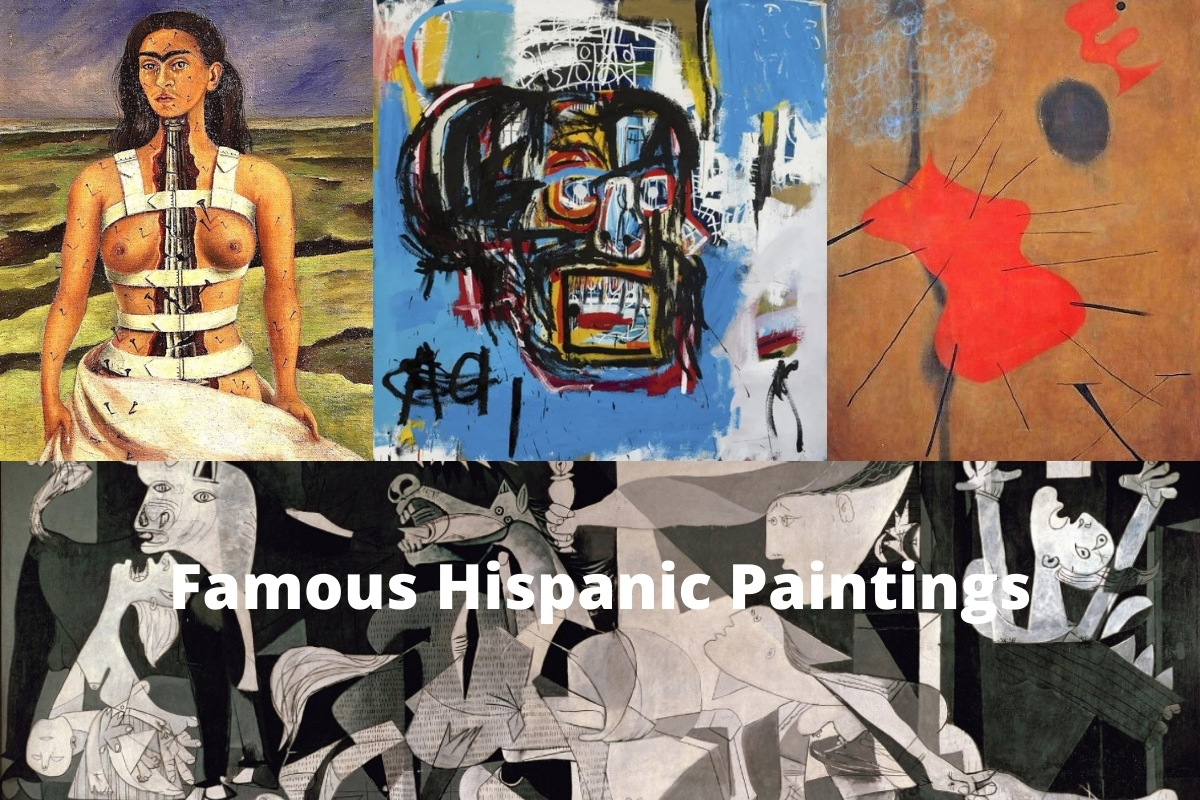 Hispanic culture has a unique flair that it all its own. This peculiar type of cultural flavor is reflected in everything from the region’s architecture to its music, and especially the artwork. Many of the most masterful Hispanic painters have created styles and works of art that have left a lasting impact on the rest of the world.

Throughout history, Hispanic painters have proved to be one of the most individualistic and creative of any other region on Earth. Their works are a special blend of their own creative inclinations, as well as the region’s vibrant cultural traditions and customs of the native people that inhabit the Hispanic nations.

For centuries, they have used their talents to portray their peoples’ historic achievements and capture a sense of the region’s colorful culture. Painters like Diego Velazquez, Frida Kahlo, Salvador Dali, and many others have etched their names in history as some of the greatest painters of all time.

Pablo Picasso is perhaps the greatest of all time as he is widely known for creating paintings that capture and display some of the most important events in the regional history of Hispanic countries.

His painting titled Guernica is considered by many art critics and enthusiasts alike to be the single-most famous painting ever created by any of the great Hispanic artists.

There are many different reasons why so many critics and art lovers see this work as the masterpiece that it truly is. Picasso was a pioneer in his own rite as an artist since he was known to have explored new and compelling methods of displaying certain images and scenes that were painted in a way that had really never been done before.

Picasso’s inspiration for Guernica was the horrors and many atrocities of the Spanish Civil War, which took place from 1936 to 1939 and had a lasting impact on the him, as well as the people of Spain that continue until this very day.

He used stark contrasting black and white colors to depict various scenes of terror that occurred during the war. His work is one that portrayed the terrible nature of war in modern times as the casualties of both soldiers and civilians was incredibly significant.

Another artist who was deeply impacted by the horrors of war in his own country was Franciso Goya. His painting titled The Third of May 1808 was created in 1814, just a few years after the terrible incident that inspired his work took place.

The painting was a clear divergence from the common depictions of war by artists in Europe as many would paint soldiers of their home countries as valiant warriors who were selflessly charging into harm’s way to defend their nation’s honor and ideals against their enemies.

Goya’s work was instead one that portrayed a horrific scene in which soldiers of Napoleon Bonaparte’s legendary army are in the process of executing a group of defiant Spanish captives.

The central figure of the painting is a man, his arms outstretched and his expression is that of either defiance or pleading with the firing squad he is facing in his final moments of life. Below him are the dead bodies of his comrades who have just been killed.

This particular work is one that caused art critics and everyone else of nobility in Spain at the time to view the act of war as especially brutal and nonsensical. The painting is credited as being one of the inspirations for Pablo Picasso’s famous work known as Guernica.

3. Man at the Crossroads – Diego Rivera

Diego Rivera was arguably the most famous artist in the world during the height of his career in the early 20th century. His works invited viewers to consider the world around them in a new and transformative light that brought attention to the peacekeeping efforts of some of the most famous world leaders at the time.

His painting titled Man at the Crossroads was done in 1933 as a massive mural inside 30 Rockefeller Plaza. The work was commissioned to Rivera by the famously wealthy Rockefeller family as part of a striking mural that was to be the centerpiece of the first-floor lobby of the new building.

There was a heated controversy regarding some of the figures in the painting, namely Vladimir Lenin and a few others, that were severely at odds with the capitalist ideals that the Rockefeller family had staked its reputation on. The original work was destroyed and Rivera ended up creating a duplicate mural in Mexico.

Jean-Michel Basquiat is one of the most famous painters in the modern era. He is widely known for creating beautiful, colorful works that closely imitate the particular culture and vibe of a city that’s associated with the subject matter of his works.

His painting that is now known as “Untitled” (1982) is one that closely resembles the street art and graffiti that adorned much of cities like New York and other major world centers of commerce and culture during the 1980’s.

Frida Kahlo is known as one of the most distinct surrealist painters of the 20th century. Her works are known as being some of the most strangely realistic paintings in the genre, yet also possessing an element of psychological depth that indicated the her mental state and intention.

Her painting known as The Two Fridas was done in 1939 and is known as one of the most famous Hispanic paintings ever created.

The painting features twin figures that are undoubtedly recognized as Kahlo herself. They are holding hands and adorned in vastly different attire that represent two starkly different cultural directions of the Mexican people during the early 20th century—one representing the modest, white dress that was common of the women of Europe and the United States while the other figure is dressed in a colorful dress that is clearly indicative of the traditional Mexican garments usually worn by ladies in her native country.

Joan Miró is one of the greats of the modern era and is widely known for his Surrealist paintings that were viewed as highly abstract by some of the most highly-acclaimed art critics, as well as art enthusiasts of his day.

His painting title La Mancha Roja, translated to mean ‘The Red Spot,’ was done in 1925 and is seen as a playful, almost child-like depiction of abstract mastery.

Miró was later quoted as saying that he merely “painted the image that was in his head.” According to those that knew him best, Miró never considered himself to be a masterful painter of the Abstract genre.

The painting features a large red ‘spot’ that is seemingly pricked by several needle-like items. This central figure is set against a bland, brown-ish colored background that causes the object to stand out even more to the viewer.

Salvado Dali is respected as one of the single-most masterful painters of the Surrealist era and is regarded as the ‘Father of Surrealism’ by many art critics and historians.

His work titled Swan Reflecting Elephants is a brilliant depiction of both a trio of beautiful swans set upon a placid lake, yet also a scene of graceful elephants that are combined into the painting in a way that is a true work of art.

The composition surrounding the swans and elephants consist of bleak, dead trees that are dotted around a canyon lake. Dali’s work was done in 1937 and is still regarded as one of the most impressive works of optical illusion ever created.

Many critics argue over the intrinsic nature of the work, but others claim that it is simply a display of Surrealist brilliance and is still viewed as one of the most famous Hispanic paintings ever done.

Fernando Botero is recognized as one of the most uniquely talented Hispanic artist of the modern era and his works are ones that seem to capture much of the Hispanic culture in a truly unique fashion compared to other painters.

This painting features a group of overly large figures camped deep in the Colombian jungle.

Many of the men are asleep after what can easily be assumed to be an active campaign of fighting against opposing forces. Two of the guerrilla fighters vigilantly keep watch as the others rest.

According to many art historians, few artists had a greater impact on the Hispanic art history as a whole than Diego Velazquez. His famous work titled Las Meninas was created in 1656, but is still widely praised as one of the most famous Hispanic paintings ever done.

Velazquez enjoyed a close relationship with the Spanish royal family during the height of his career and was a regular visitor at the Royal Alcazar of Madrid.

Juan Gris was heralded as one of the most well-known painters of the early 20th century and a pioneer of the Cubism movement that quickly swept across Europe during the time period.

Gris’ work titled Portrait of Picasso features the legendary painter, Pablo Picasso, in a unique Cubist form that was not often used for portraits, especially in the years leading up to when this work was painted in 1912.

The painting features Picasso lounging in a chair, adorned in an elegant suit that is of a bright, blue hue. Gris and Picasso were close friends and this particular painting is a rare occasion in which Picasso allowed Gris to paint a portrait of the highly-praised artist.