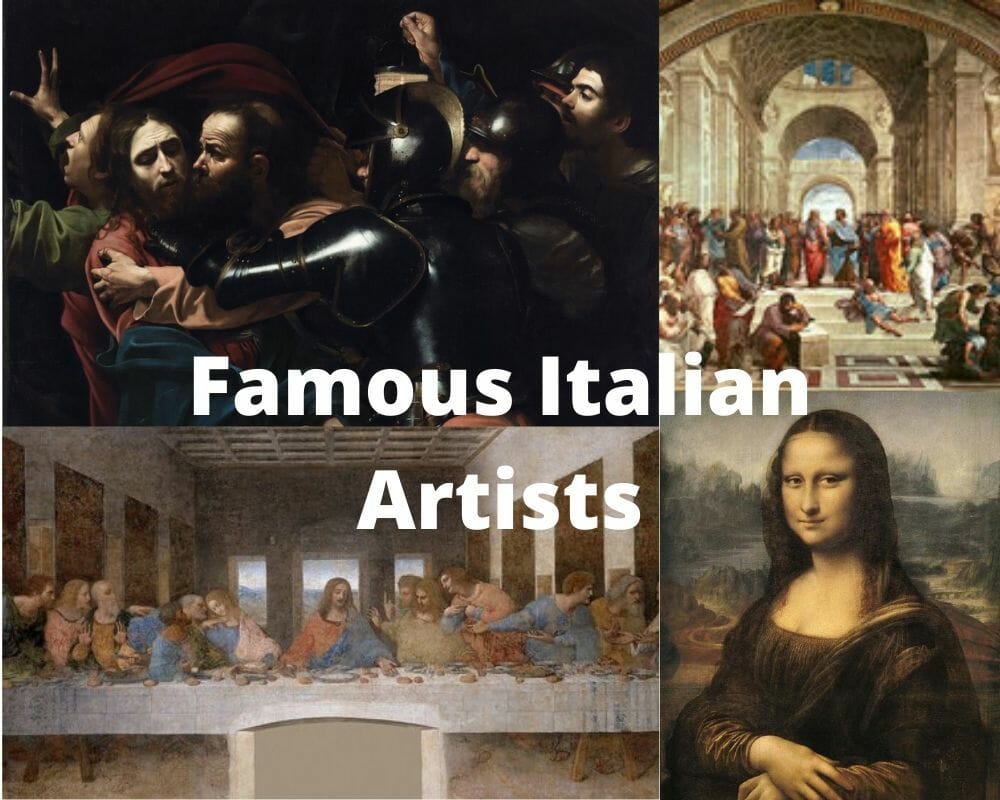 The most famous Italian artists are mostly from the renaissance period however their are a few stand out artists from other periods who’s work should not be ignored.

Our list of famous Italian painters and artists for the most part will be instantly recognizable but beyond the great masters there are others who are worthy of note and often underrated.

Leonardo da Vinci, born in Tuscany, Italy in 1452, was a man fascinated by everything from drawing and sculpture to architecture and engineering. While he is now lauded as a pioneer in many different scientific studies, he was renowned as a painter during his lifetime.

His knowledge of human anatomy and expression lent him great skill in his paintings which were often the subject of his artistic works exemplified best in Mona Lisa, a painting that was actually left unfinished yet has become the most famous painting in the world.

As a child, da Vinci showed artistic talent and, at the age of fourteen, he began an apprenticeship under Andrea del Verrocchio and studied a broad range of subjects.

After beginning his own exhibit at Florence’s Guild of Saint Luke as a master artist, da Vinci began a long and successful career in painting. He continued painting until his left hand was paralyzed two years before he died in 1519.

Michelangelo Buonarotti was born in 1475 Florence, Italy. With an early interest in painting, he began an apprenticeship with Domenico Ghirlandaio at the age of thirteen but left after one year due to his aptitude and quick learning.

Before turning thirty, he had completed his two most famous sculptures, David and Pieta, and established himself as a masterful sculptor. A few years after completing David, he began painting the Sistine Chapel ceiling, an endeavor that would last for four years.

Both he and da Vinci are widely known to be two of the greatest artists to have ever lived.

Towards the end of his life, Michelangelo took up architecture in order to avoid physical labor until he died in 1564.

Michelangelo devoted his artistic expressions to the human figure. He would dissect cadavers in his free time in order to study human anatomy.

Armed with this knowledge he would apply it to great affect on two of his best pieces, David and his fresco in the Sistine Chapel, both displaying his masterful understanding of the human figure.

Raphael Sanzio was born in 1483 in Urbino, Italy the son of a painter. Learning from his father, he took up painting, and, after his father’s death when he was only eleven, he took over his father’s workshop where his success quickly surpassed his father’s.

At seventeen, he began an apprenticeship under Pietro Vannunci in Perugia, Italy where he developed his style of painting over four years. After leaving his apprenticeship, he created a series of Madonnas as an extrapolation to Leonardo de Vinci’s.

Raphael’s subject matter for paintings were usually religious subjects. His most notable works, the Madonnas, Transfiguration, and a portrait of Pope Julius II, reflected this focus.

Additionally, in 1514, the Pope hired him as chief architect where he designed rooms, buildings, and palaces. He continued to work as both a painter and architect until his untimely death in 1520 at just thirty-seven years old.

Giotto di Bondone is cited as one of the first renaissance artists and was a pivotal individual in the deviation from the byzantine style of art. Instead, he preferred to paint life in actuality, incorporating three dimensional forms and depicting accurate human emotions.

Most of Giotto’s life is surrounded in speculation due to lack of accurate records. He was born around 1266 in Florence, Italy.

As a child, he showed a shocking talent for painting with no formal training and was discovered by Giorgio Vasari who sent him to Cimabue, an Italian painter at the time, to apprentice under.

Very few pieces are certain to be painted by him, though many are rumored to be, with the Frescoes in Scrovegni Chapel, completed in 1305, being the most prominent of his works. He was said to have died in 1337 and buried in the Cathedral of Florence.

Michelangelo Merisi da Caravaggio was born in Milan in 1571. At the age of thirteen, he began an apprenticeship with Simone Peterzano.

A few years after completing his apprenticeship, he had an altercation with an officer that resulted in him fleeing to Rome in order to avoid the charges, a pattern that would follow him throughout his life.

In Rome, he quickly rose to prominence until he was forced to flee again after killing a man, traveling to Naples, Malta, and Sicily each time for similar reasons. Eventually, he died in 1610 due to complications from a wound he received in another altercation.

Despite his combative personality, Caravaggio’s paintings were largely lauded and he was always commissioned for work at each place he fled to.

His unique style was known for its realism and use of drastic contrast which would later influence the style of baroque painting.

Amedeo Modigliani was an underrated Italian Jewish painter and sculptor, achieving very little success during his life. With his art usually focused on portraits and nudes, his pieces’ defining features are dramatic elongations of the face, necks and figures.

Born in 1884 Livorno, Italy, Modigliani claimed to be a painter from an early age, even before receiving formal training. After promising to take him after he recovered from typhoid, Modigliani’s mother took him to Florence where she ended up enrolling him with the best painting master in Lavorno: Guglielmo Micheli.

After contracting tuberculosis, he left this apprenticeship and moved to Paris. There, he abandoned his gentleman-like appearance in favor of an impoverished lifestyle, possibly due to his addiction to drugs and alcohol.

Despite this, he continued to create sculptures and paintings at a startling pace until he succumbed to a recurrence of tuberculosis, dying destitute and alone in 1920.

Giorgio Morandi was an Italian painter and print-maker that focused on still life paintings. Most of his still-life’s depicted very simple subjects, such as bottles and vases, with an emphasis on subtlety, establishing himself as a leading individual in minimalism.

Born in 1890 Bologna, Italy, Morandi entered the Academy of Fine Arts of Bologna when he was seventeen years old. There, he taught himself how to sketch from books on Rembrandt.

Throughout his life, his artistic style slowly became distilled down to subtle gradations of tone and hue with the compositional elements becoming more reduced.

In 1929 he received his first of many awards for an illustration he did titled II Sole a Picco. Eventually Morandi died of lung cancer in 1964, leaving behind a legacy that is one of the few of his time to escape the tarnish of Fascism.

Titian, born in 1488 as Tiziano Vicelli, was known as the greatest painter of his time. Though the subjects of his paintings varied from religious and mythological scenes in his early years to portraits towards the end of his life, he is most noted for his vivid and luminous color usage.

Along with Giorgione, he is credited as the founder of the Venetian school of Italian renaissance painting.

Along with his brother, Titian was sent at the age of ten years old to Venice in order to apprentice a painter. Eventually he apprenticed Giovani Bellini who was known as the greatest painter of the time.

Showing incredible skill as an apprentice, he gained success early on and enjoyed a long and successful career, succeeding Bellini as the master of Venetian painting after his master’s death until his own death in 1576 due to the bubonic plague.

Born in 1445 Florence, Italy as Alessandro di Mariano di Vanni Filipepi, Sandro Botticelli was sent by his father to apprentice as a goldsmith.

After showing promise as an artist, he began an apprenticeship with Fra Filippo and was taught to paint frescoes. After the apprenticeship, he was commissioned by churches until he received patronage from some of Florence’s leading families, including Medici.

Having earned notoriety from an early age as an apprentice, he was eventually invited by the Pope to paint the Sistine Chapel walls.

Unfortunately, the later years of his life, until he died in 1510, were plagued with poverty and isolation after the loss of Medici’s patronage.

Most of Botticelli’s paintings were of religious subjects. However, his most famous renaissance paintings, Primavera and The Birth of Venus, focus on mythological subjects.

Giorgione Barbarelli da Castelfranco, known as Giorgione, was born in the Republic of Venice in 1477.

During his youth, he apprenticed under Giovanni Bellini in Venice whom Titian was also studying under at the time. After his apprenticeship, Giorgione was recognized early on and quickly rose in prominence as a master.

Despite a rapidly successful career, Giorgione’s life was cut short after he contracted the bubonic plague and died somewhere in his early thirties.

Unfortunately, only six pieces of his remain today, leaving much of his body of work up to speculation and rumors.

One notable characteristic of his style was that some of his painted pictures told no story at all. He is also credited as being the first to have the stark intensity of color that is at the core within the Venetian school of art.