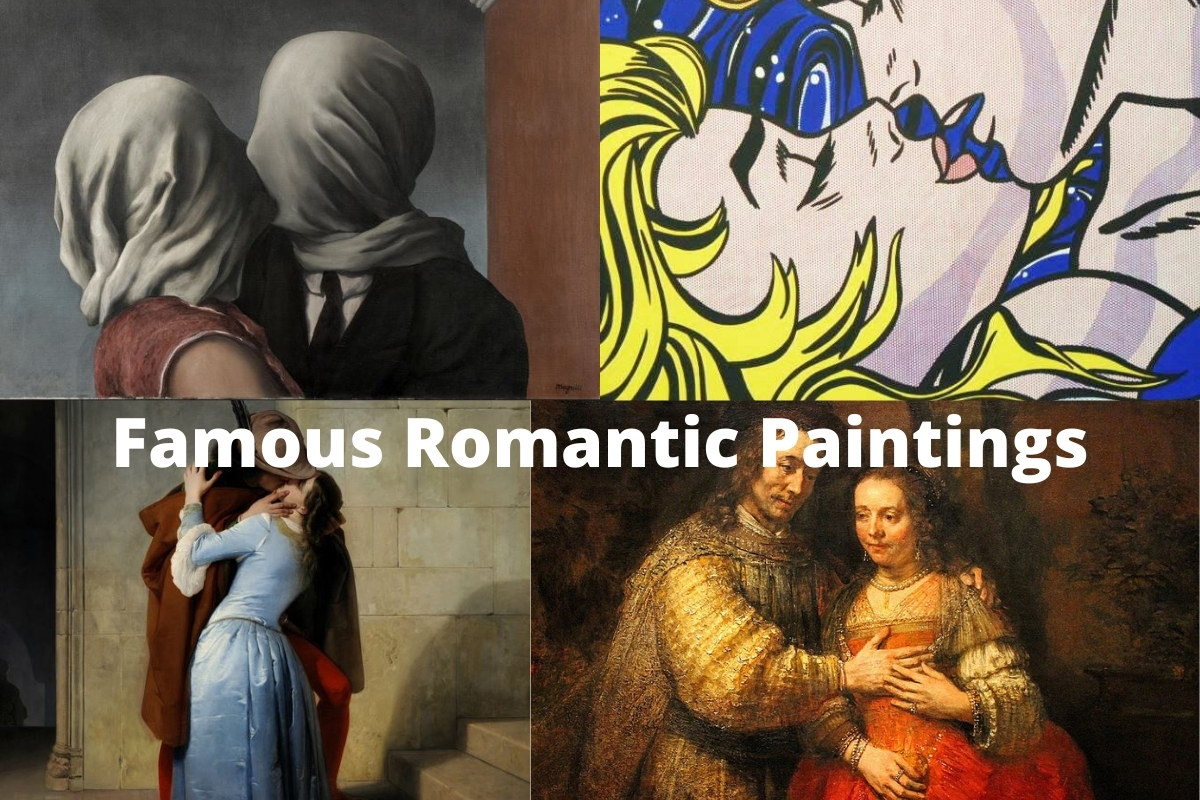 Art is inherently driven by the deepest of human emotions. Romance has long been represented in nearly every type of art form across the world in one way or another. Artists have taken their own passionate feelings toward their significant other, or used inspiration from other couples and individuals to portray what many consider to be the strongest force in the universe—love.

Across a wide variety of artistic styles and movements, romance has continually appeared as a mainstay that many artists are persistently inclined to paint and depict through a number of painting methods.

The concept of love and romance is likely to be the most consistent single human characteristic throughout the many different languages and cultures the world over.

While romantic paintings were largely stifled during some of the most famous artistic genres in history due to strict adherence to religious convictions and customs, the concept of romance has stood the test of time.

Here are 10 of the most famous romantic paintings of all time.

Many different paintings bear the title The Kiss as it is a simple description of one of the single most passionate displays of human affection in existence.

Gustav Klimt painted a work in 1907 that portrayed two devoted lovers in a passionate embrace, aptly naming the piece The Kiss as so many other artists had done before him.

This painting had its own unique manner of expressing the love each subject has for one another in a colorful and gleaming perspective that drives the viewer to focus upon the two lovers.

The Kiss depicts a couple embracing one another, the male figure wrapping his arms around a female figure who appears to be melting into the man’s display of affection.

The couples’ bodies seem to be entwined with one another as it is nearly impossible to distinguish where one’s golden robes end and another begins.

This painting is considered part of the Art Nouveau style and appears to blend certain characteristics of genres that focus on both the human and the divine.

The golden colors are indicative of previous uses by artists intending to deify certain figures with gold garments or jewellery and even golden surfaces beneath their feet. The couple’s clothing appears to have a somewhat Mosaic quality that points to similarities of Bronze Age artistic works that involve similar patterns which depict divine beings.

Many art critics note that Klimt’s aim was likely to portray the love story of the Greek god and goddess Orpheus and Eurydice.

Rembrandt was well-known for his uncanny ability to portray figures and scenes in a manner that seemed to bring the elements on the canvas to life. His painting titled The Jewish Bride is one of the most popular works that feature a passionate encounter of two lovers and is also known throughout the art community as Portrait of a Couple as Isaac and Rebecca.

This work portrays a man lovingly embracing a woman, one hand on her back, the other reaching for her breast. The woman’s hand seems to brush against the man’s extended hand in a manner that seems to offer her own manner of expressing her feelings toward this individual. This painting is devoted to the passionate embrace of a couple, yet neither the man or the woman look at their significant other.

Vincent Van Gogh was said to be so awestruck by this painting that he remarked that he would gladly exchange ten years of his own life to be able to sit and admire the work for two full weeks. The painting’s simple, yet significant nuances are what draw many art critics and enthusiasts to this work, with many noting that it is among Rembrandt’s greatest paintings.

One of the most iconic works featuring a scene of romance is Pierre-Auguste Cot’s painting titled Le Printemps, which is also known as Springtime. Created in 1873, this work is one of the most easily recognizable paintings in the world as it features two figures playfully embracing one another on a swing in the forest.

The French painter masterfully painted the couple wearing flowing robes that seem to indicate each one’s’ inner emotions that are being exuded through their expressions. The male figure is depicted as wearing a red garment, seeming to indicate his burning desire for the young girl while she is draped in a spotless white dress, which could hold a meaning of purity.

The work displays a striking level of realism for the two figures, as well as the intricate details of the natural world that is seen in the background.

One of the most well-known paintings that bears the title The Kiss was done by famous Italian artist Francesco Hayez in 1859. His work features two lovers passionately embracing one another for a kiss that appears to be one that might be done in secret.

The artist portrays a stunning level of realism in every minute aspect of the painting from the lovers’ hands around one another to the woman’s flowing blue dress.

The painting has many characteristics of the Italian Renaissance, which Hayez is said to have studied extensively during his early career. The viewer is drawn to focus on the lovers as both the light and shadows seem to create a balance that prominently features the two, while the steps on the right side of the canvas point downward to the couple.

This painting has been the subject of lengthy interpretations and is widely considered the most popular painting in history with a romantic theme.

The legendary painter Pierre Auguste Renoir is well-known for producing works that are devoted to displays of lovers in various forms and situations. His painting titled Danse à la Campagne is a simple, yet elegant portrait that features a man and woman tied up in one anothers’ embrace while enjoying a dance together.

Among the earliest French Impressionist painters, Renoir had a knack for portraying individuals with a significant level of emotion. Many times this emotion was painted in a way that played into a larger dynamic, such as in this work where the woman is seen with a love-stricken smile while the man is likely drawn focusing as much on the music as he is upon his dance partner.

6. We Rose Up Slowly – Roy Lichtenstein

Roy Lichtenstein was an American painter known for his ability to recreate and enhance the already-iconic scenes from popular comic books during the 1960’s. This work, titled We Rose Up Slowly, depicts a couple in a close embrace as they are just about to kiss one another.

The painting bears the notation as any comic book would, an inscription that reads “We rose up slowly as if we didn’t belong to the outside world any longer…like swimmers in a shadowy dream…who didn’t need to breathe…”

The oil painting was done in 1964 on an enormous canvas that was believed to further drive the viewer to focus on the passionate expression on the man and woman’s faces.

This work depicted what many might consider to be a standard scene of romance for American culture during this time, a square-jawed man entangled with a beautiful blonde in a steamy embrace.

He had similar yet more sorrowful works such as Crying Girl Pop Art painted in the same style.

Flemish artist Peter Paul Rubens is famous for his work in the Baroque painting movement throughout the early 1600’s. He painted The Honeysuckle Bower in 1609 and the work is one of the most well-known paintings of a couple that represent the whole of societal norms for their particular time period.

The man and woman appear to be gazing back at the viewer, lovingly touching one another’s hand while sitting in front of a honeysuckle bower.

The painting is one that perfectly represents the manner in which Dutch nobility would have appeared during this time. Rubens was known for his ability to paint intimately realistic portraits of his subjects, and this work was no different.

Many art critics hail Rubens for the significant level of detail he managed to achieve, as well as the many different layers of symbolism that is also ingrained in this painting.

Few artists were bold enough to portray lovers in such a deep level of intimacy in 1892 as Henri de Toulouse-Lautrec. His work titled In Bed The Kiss, features a couple laying in bed, wrapped into one another’s arms.

This type of painting was largely scorned at the time for its sexual nature, but the artistic elements that Toulouse-Lautrec managed to depict put this work as one of the most famous romantic paintings in history.

Toulouse-Lautrec often frequented the French brothels in and around Paris during the 1890s and this painting is believed to depict a scene in which a man is engaging in an embrace with a harlot.

His painting is part of a series of sixteen works that feature scenes and figures from a brothel on the rue d’Ambroise.

One of the most strikingly bizarre paintings that involve romantic lovers was done by Belgian surrealist painter Rene Magritte in 1928. The strange depiction of two hooded lovers is one that is both iconic and unsettling as the often-portrayed cinematic kiss is hidden from view by the cloth that covers the face of both a male and female figure.

This particular piece of surrealist art was widely considered one of Magritte’s most popular paintings. Art critics and enthusiasts have both praised and been perplexed by the work, offering a wide variety of different interpretations for the strange nature of the hooded lovers.

Some critics believe the painting might have much darker connotations. Magritte’s mother committed suicide when the artist was only 14 years old by drowning herself.

It is said that the young artist was haunted by the sight of his dead mother’s face being shrouded with her wet nightgown—a scene which is eerily similar to that of both hooded figures in this painting.

10. A Stroll on the Canal at Quimperle – Henri Le Sidaner

Henri Le Sidaner was a French painter who was well-known for his ability to portray various social interactions in a classic Impressionist style.

His 1913 painting titled A Stroll on the Canal at Quimperle depicts a couple lounging beside the water in the French town just as the night is setting upon the canal at Quimperle.

Most of Le Sidaner’s paintings depicted night scenes and this was one of his most well-known works as it features a wide array of colors and masterful use of light displays as they illuminate both the water surface and the buildings in the background.

This painting was hailed for its color and composition, as well as the romantic nature of the moonlit scene.